Quarantine Turned My Husband into a Chef 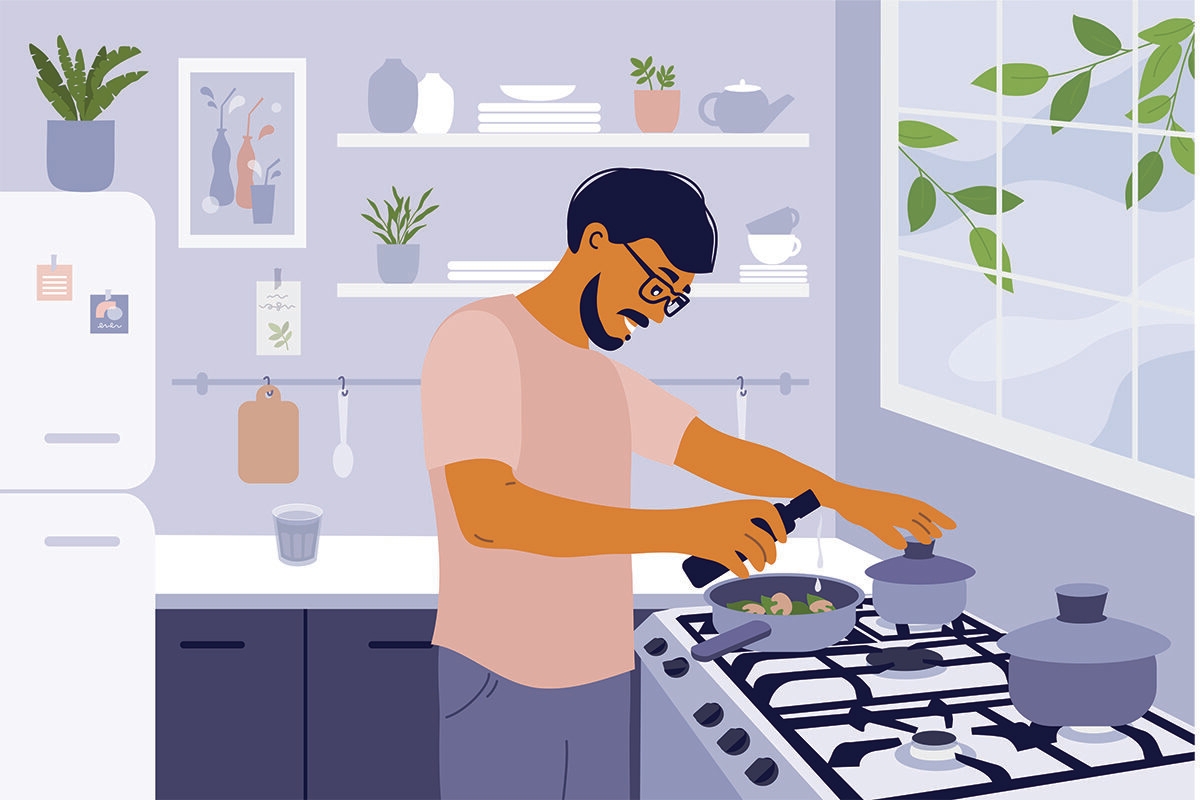 I guess the signs were already there. When we first got married, nine years ago, my husband surprised me with dinner. We were 21, high school sweethearts, just kids.

“Meat sauce with a special ingredient,” he had said with a boyish grin. It took a lot for me to swallow that first spoon. But I did. “Cinnamon?” I asked, trying to sound casual, suppressing a gag. “I definitely taste cinnamon.”

“Yup,” he said proudly. I ate a couple of spoons of the dish and snuck the rest in the garbage.

Over the years, when I was cooking, he would hover around in the kitchen asking what he could do. He’s the kind of guy who needs to keep his hands busy — an athlete and a builder and renovator by trade.

“Want to cut the onions?” I’d suggest, my messy cooking skills displayed wildly on the counter. “Sure,” he’d say. He’d pull out the knife and cutting board and begin to finely chop. I’d turn around to a fully wiped-down counter. Even then, he liked a clean workspace.

Beyond the odd onion here and there, however, the kitchen was my domain. It wasn’t intentional, but I enjoyed cooking, taking after my mother’s Moroccan flair and preparing spicy foods, which he liked. But as we grew, so did our careers, and coming home tired meant that I was either whipping up a quick dinner or he was simply throwing chicken on the grill. On Fridays, for Shabbat, dinner was usually a team effort — but with our schedules, it was usually takeout, along with my mother-in-law’s chicken soup that she set aside for us every week.

A few months ago, however, during my maternity leave, we moved across the world to Israel. Suddenly, we no longer had my mother-in law’s soup to pick up before Shabbat. I felt daunted by the responsibility of learning a generational recipe, so my husband took it on instead. His first chicken soup was watery. But his next attempt was one of the best we ever had. After that, he was deemed the “Chicken Soup Guy.” And that was the extent of it; he’d come home from work and enjoy spending time with the little one while I made dinner.

Then the pandemic hit. We were relegated to lockdown conditions in our apartment, the two of us and our playful toddler. Lockdown meant my husband couldn’t go to work, and the farthest we could legally venture was 100 meters from our home. Part of the reason we moved to Israel was so that my husband’s free spirit could enjoy surfing in the ocean and the active lifestyle that a Mediterranean climate had to offer. But none of this was possible now. I shot worried glances his way as he paced in the confines of our living room.

“Should I make dinner?” he asked one quiet evening between alarming news reports on the rising cases. I pondered the idea. I was hesitant to give over the reins — other than the soup and the grilling, he hadn’t made dinner from scratch since the infamous meat sauce. But he was pacing so much, so we switched. I watched the little one while he pulled out cookbooks from the pantry that I hadn’t opened in years.

It was as if something ignited. And not just the fire in the smoker that I had recently gotten him for his 30th birthday. Some dormant spark and passion for cooking ignited in him. I watched him move about in the kitchen, rummaging through cabinets, pulling out ingredients, and neatly laying them out on the counter in preparation for his dishes. He soon started researching techniques to improve his smoked meats, even making his own spice mixes and coffee rubs. Every day he made something different, from succulent brisket and steamed dumplings to empanadas dipped in homemade chimichurri and thinly sliced eggplant carpaccio with rosewater. Yes, rosewater.

It wasn’t long before he decided to give baking a shot, too, looking up recipes I’d never attempt. He’d set his timer and knead the dough at length, then fold it, roll it — you name it. Our place began to smell like a French patisserie (my literal dream) as he pulled fresh babkas, croissants, and lemon meringue pies out of the oven.

“Sarit, I realized cooking is just like building,” he said one day as I watched in awe as he carefully constructed a napoleon, piping the cream with a perfectly steady hand and eyes so focused I had to look away. “This napoleon reminds me of tiling a backsplash… the puff dough is the tile. You’ve got to place it down carefully.”

“I see,” I said, dipping my finger into the lemony custard and sneaking a lick, shocked by the explosion of flavor in my mouth. He had refrigerated it overnight, exactly as the recipe instructed. I think he might be onto something. Most complicated recipes give me a headache, the same way an IKEA manual does. He brought a whole new level of skill into our household.

His dishes were so appetizing that I started an Instagram page, which now has over 2000 followers, called Eatsz_, Eatsz by Sarit and Zvi. I photograph and style the foods, showcasing his cooking and creativity. My personal favorites are the freshly baked croissants that take three days to prepare. It’s a rigorous, repetitive process of rolling and folding the dough with heaping layers of butter, followed by hours of refrigeration. I’m usually extremely eager to bite into one, so I tend to ask him if he can find a shortcut, put them in the oven sooner — you know, get the whole process rolling. “I can if you want me to, but they won’t taste the same,” he replies. He is serious about his craft.

He’s also getting quite the reputation around town, taking friends to the local butcher to help pick out the perfect cut of meat, and he offers advice on challah baking. Friends have been asking, “Has he always been this good of a cook?”

I have yet to make dinner since that night three months ago. When most of the lockdown restrictions were lifted, he still fit all the cooking and baking in between work and surfing. Unfortunately, it seems that Israel might be heading toward another lockdown, but I’m no longer as worried about him pacing. Luckily, his new passion is here to stay.

Do I miss cooking? Not even a little bit! One day, I’ll look back at this crazy time in our lives, the time when the world had stopped and predictability became a laughing matter — but the silver lining was that a talent was uncovered and my husband became a chef.