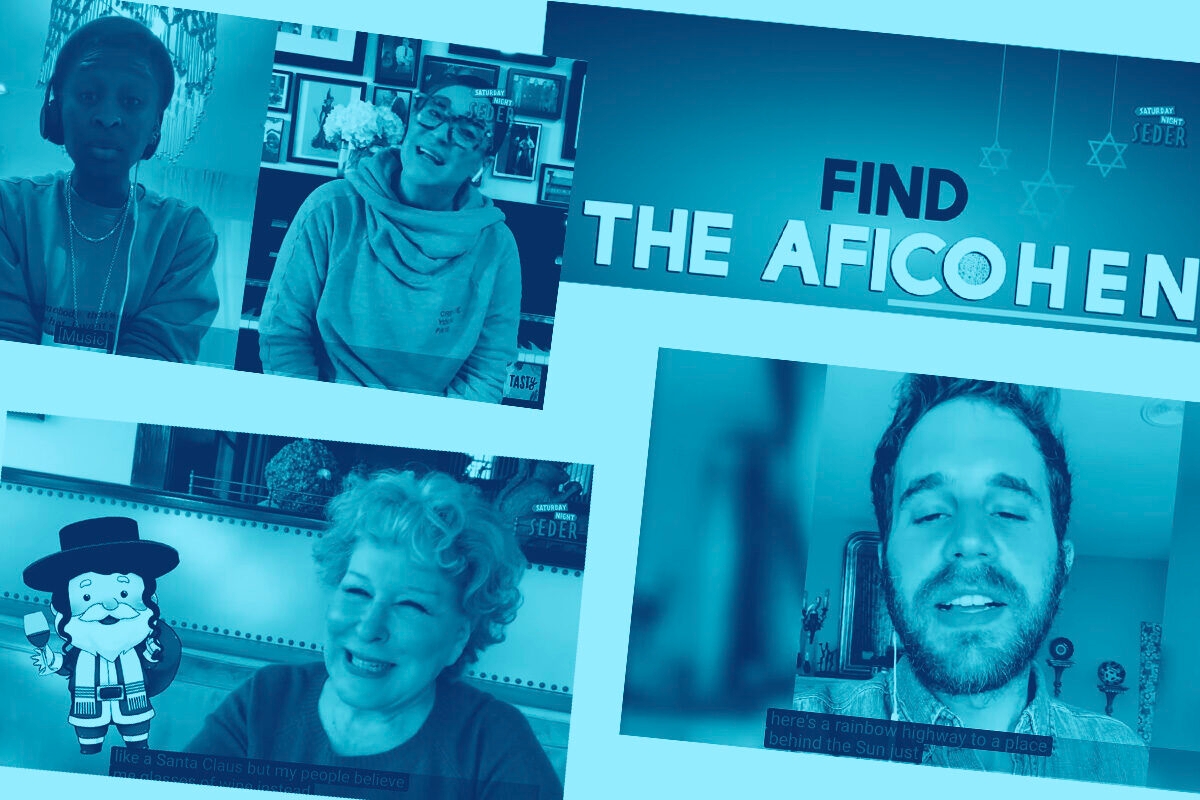 Guys, I am here to tell you you need to watch “Saturday Night Seder.” Now, I know I was excited about this special benefit for the CDC Foundation, starring a host of Jewish and non-Jewish talent when I found out it was happening, but I tried to keep my expectations realistic. After all, it’s hard to make inspiring content in these days of social distancing when we are all going through so much.

But, watching it, I was truly blown away. I was verklempt, as some would say. It was just so great: the perfect mix of moving and schmaltzy, smart and silly. It was full of Jewish meaning, featuring incredible rabbis of all denominations and Jewish stars for every age group.

If you didn’t catch it live on Saturday evening, fear not: You can watch it in all its glory here.

It’s hard to choose my favorite parts of “Saturday Night Seder,” because they were almost all my favorite. (Seriously, it’s that good!) But say — oh, you know, the 24/7 parenting/working grind has you down, and you don’t happen to have an hour-plus free anytime soon. We’ve got you covered! Here are the nine very best moments from the show:

1. “When You Believe” by Cynthia Erivo, Shoshana Bean and Stephen Schwartz

The Prince of Egypt has an incredible soundtrack — and we know this song was also a smash hit by Whitney Houston and Mariah Carey — but this version by Cynthia Erivo and Shoshana Bean, with piano by Stephen Schwartz, who created the music for the original movie and the recent West End musical, is tops. It’s the right mix of awe-inspiring, moving, and uplifting.

It’s Idina Menzel. Of Frozen fame. Of Wicked fame. Of Uncut Gems fame. Singing the friggin’ four questions! Menzel is the queen of “Ma Nishtana” and the adorable BBYO kids singing it with her just added to the joy. Wow. This was better than Frozen 3 could ever be!

My kid just asked is this from frozen 3? I plan on using this version next year. https://t.co/sLe1SgGlEG

Fran Drescher has made our ceremonious Passover and pandemic-related hand-washing complete by giving us the perfect 20-second song: the opening theme from  The Nanny! We are truly so grateful. Dayenu!

4. Jason Alexander hosting us at his Seder table

Believe it or not, George is always at home now! And that means he has time to have us for Passover. Getting to see him in a kippah singing a new version of “Dayenu” (featuring Mrs. Maisel herself, Rachel Brosnahan!) is just a gift.

5. “Over the Rainbow” by Ben Platt and Judith Light

I cried like a baby at this bit by these two amazing Jewish performers, which reminded us that we are also the descendants of people who escaped persecution in hopes of finding freedom here in America. Platt sang a gorgeous rendition of the song and Light told us the story of its two Jewish writers. The rest of us, meanwhile, l wept and wept.

6. Dan Levy putting a Seder plate together with Michael Solomonov of Zahav

Dany Levy, Schitt’s Creek co-creator along with his famous dad, Eugene Levy, got some serious pandemic Passover help from Michael Solomonov, the chef of Zahav, the tony Philadelphia restaurant where even stars like Levy can’t get a table! On Dan’s seder plate: a dog treat, pear butter, salsa verde, pickles, dried lemon, a leaf from a dried plant. It’s the thought that counts!

7. Finding the “Aficohen” with Andy Cohen

Andy Cohen hid the afikomen from us, virtually, and it was glorious. The Jewish dad told us hiding the afikoman was his favorite fact of Passover. SPOILER ALERT: The afikomen was on itwouldhavebeenenough.com and it was a link to donate to the CDC Foundation.  We’re grateful that Cohen reminded us that we are all real housewives right now!

That’s right, Bette Midler played Elijah. She’s the true prophet! We’ll happily put out a couple of bottles of wine (or several boxes of granola bars, because according to Bette, Elijah’s sober now!) by the door if we can have her over next year!

This beautiful musical number wrapped up the show, and it was just so moving. Sang by Jewish broadway star Shaina Taub and Skylar Astin (Crazy Ex-Girlfriend and Zoe’s Extraordinary Playlist), it featured many of our favorite stars and other Jewish people saying where they wanted to be next year. There was Beanie Feldstein who wanted to be with her friends, and Sarah Silverman who wanted to be holding hands. Above all, there were members of the medical community, who were there, in their masks and scrubs, reminding us that this is a benefit to help these amazing people in the front line.

So if you loved “Saturday Night Seder” as much as I did, why not help them with some gelt? Maybe in chai multiples. You can donate here.

Happy Passover and next year, together.