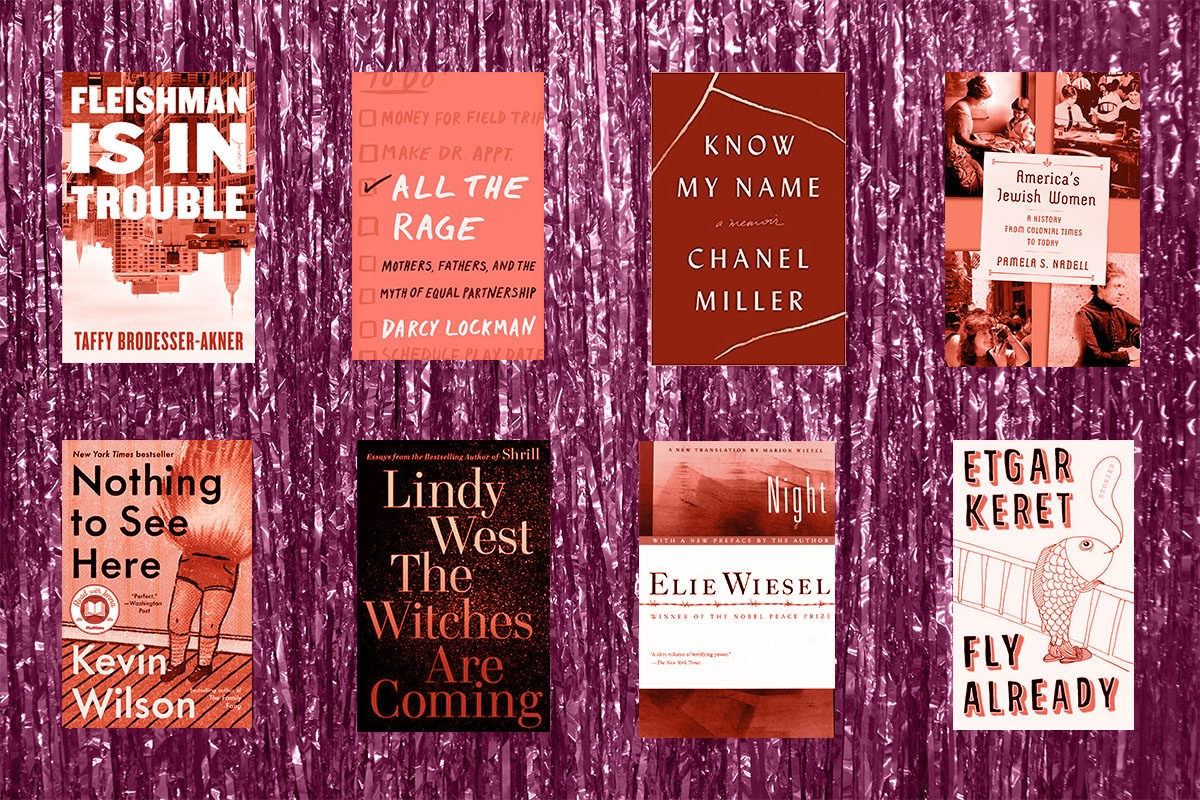 Eight days of Hanukkah lie ahead of us, along with the assumption that we’ll be giving gifts. Personally, I try to downplay the gift-giving element of the holiday, giving comparatively inexpensive, not-a-big-deal gifts — I really outdid myself when I gave my girls empty Pez dispensers one night.

But sometimes, there are people in your life with whom you want to connect with by giving them a gift that shows forethought and carries meaning. And I’d argue there’s nothing better for doing that than the gift of a book.

Books have superpowers. They engage our minds in ways that Facebook links can’t. They test our capacity for empathy and take us beyond the perimeters of our own experiences. Whether you know people who read to escape, or people who read to better themselves, we’ve got your gift selections here. You’re welcome, and happy Hanukkah!

1. For someone who “doesn’t have time to read”

If you really believe in books, you know that excuse is garbage. You can find time to read like you can find time for anything, whether it’s exercise (actually, I can’t find time for that) or buying new bras (OK, OK. Maybe we should just change the subject). Anyway, you can implicitly call bullshit on your book-reluctant friends by gifting them Israeli writer Etgar Keret’s newest book, Fly Already: Stories. His “flash fiction” is never more than 10 pages a story, and his delight in the absurd is both hilarious and remarkable. It’s fun, it’s quick, and it might even be enough to get people interested in reading again. You can hear more from Keret in our very own interview with him on Kveller’s Call Your Mother podcast.

2. For someone who loves history

Anyone who is interested in Jews and America would be well-served to read Pamela S. Nadell’s book, American Jewish Women: A History From Colonial Times To Today. This is a view of American history as lived and shaped by Jewish women. You’ll learn about everything from how Jewish women created the scaffolding of Jewish life and education in the U.S., to how it was Jewish women who changed the country for the better with the labor movement. You will finish this book feeling proud to be Jewish in America, a feeling we all need in these precarious times. I wrote more about this book and recommended it in The New York Times here.

3. For people who want/need to learn about the Holocaust

If you haven’t read Night by Elie Wiesel — or if that could be said about someone you love — well, I’m just saying that perhaps now’s the time for a refresher on how insidious hate can be, and what happens when hate is unchecked by law and decency. “Never again” is only true if we understand what happened in the first place. The newest edition of this iconic memoir is the one to get, as it includes new material, such as Wiesel’s speech to the United Nations General Assembly on the occasion of the 60th anniversary of the liberation of the Nazi death camps, as well as a memorial tribute by former President Barack Obama, calling Wiesel “one of the great moral voices of our time, and, in many ways the conscience of the world.”

4. For a male spouse (yours, or someone else’s)

Hanukkah is a time for appreciating miracles — so why not do a deep dive into the topic of how we live our lives as parents and partners?  (Isn’t’ every day we survive as parents a miracle?) Darcy Lockman’s All The Rage: Mothers, Fathers and the Myth of Equal Partnership is what I’m giving my husband this year. He might be turned off by the pink cover, but as the saying goes, don’t judge it by its cover! This book will open any male reader’s eyes to the systemic inequalities of everyday life as a two-working-parent household. And there’s data to prove it: According to a 2018 Oxfam report, for example, women around the world do between two and 10 times as much unpaid care and domestic work as men do – and the global value of this work annually is estimated at around $10 TRILLION!  I think any man would find this book illuminating.

5. For someone who loves empowering activist essays

Lindy West’s The Witches Are Coming is a book that is on fire with passion, conviction, and determination to forge a better world for women. It doesn’t hurt that she’s also brilliant and hilarious — this isn’t a screed, it’s a laugh-out-loud roller coaster through West’s brilliant intellect and piercing wit. The essays from this frequent New York Times columnist include deft arguments on how to recognize — and cripple — modern misogyny. Her pieces are like little light switches that flip on and illuminate all the bullshit of the world in which we live, whether she’s discussing the Me Too movement or the weight-loss industry. This book will reinvigorate and reactivate your own sense of personal responsibility. Or, as she puts it: “Whatever your sphere is, however big or small, you get to make choices within it, and if you care about healing the wounds of the world,I hope you become a real demon bitch about diversity and never let anyone sleep. Think radical thoughts and let yourself imagine they’re true. Then ask yourself why it’s considered radical to make art that accurately reflects reality, to build a society that takes care of its members, to demand a better world.”

6. For someone not afraid of a soul-confronting memoir

Know My Name by Chanel Miller is written by the victim in the now-infamous Brock Turner Stanford rape story. The depth of Miller’s writing as she recounts her experience as “Emily Doe,” the accuser in one of the most famous rape cases in recent years, will floor you. (Turner, as you may recall, garnered a flood of support from people worried that the accusation would tarnish a promising man’s future.) The Los Angeles Times said this book should be required reading for every cop, judge and prosecutor in America, but I think it should be required reading for every parent. Nobody wants to imagine their kids as a victim or a perpetrator of sexual assault, but we need to all be reminded about the consequences if we fail to educate our children about sex and consent, boundaries and decency.

Teru Clavel’s World Class: One Mother’s Journey Halfway Around The Globe In Search Of The Best Education For Her Children was the sleeper hit of my reading season. On the surface, it’s not a parenting book per se — it mixes memoir and research on what happens in different educational contexts in Asia and America. It’s well-written and compelling, and it’s also edifying for parents. Clavel provides helpful lists of what to do as a parent to become engaged and involved in our kids’ education, and in doing so conveys the implicit and explicit message that when our kids go to school, we don’t hand over the steering wheel over our kids’ intellectual lives.

8. For someone who reads books as an escape

Yes, we’re terribly busy and the world can be a dark, scary place. But we’re still allowed to read for pure enjoyment, without the added component of instruction or edification, right? I recommend Kevin Wilson’s Nothing to See Here, which is, as my teenage sons would say, “lit.” It’s a crazy romp through what it would be like to babysit kids who regularly burst into flames. Yes, that’s what this book is about! It’s so smart, so engaging — and, full disclosure, it actually does hold up a mirror to real issues in modern parenting and life, because what is parenting but an eternal collision with the unexpected?

And a bonus recommendation (for the shamash)

My friend Taffy Brodesser-Akner’s Fleishman Is in Trouble, which you’ve seen everywhere in the world, with good reason. Read this novel about divorce through to the end and prepare to have your mind blown.