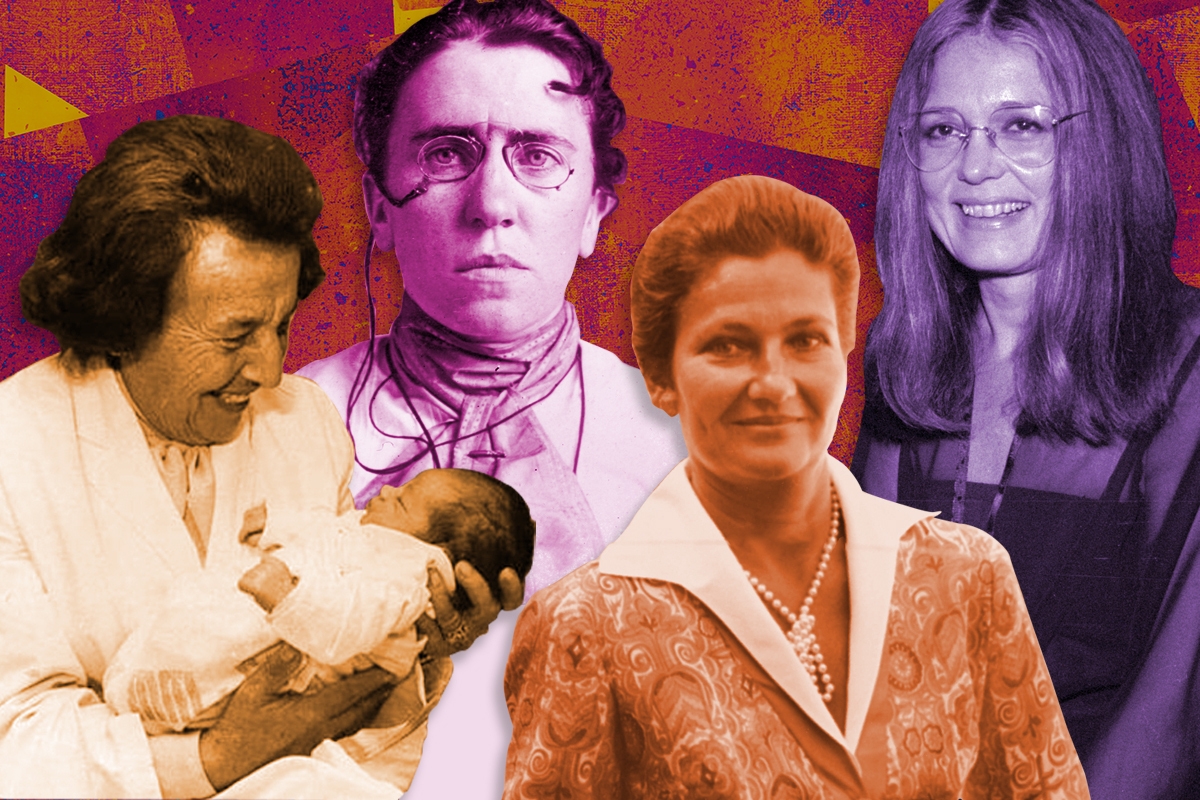 The recent overturning of Roe v. Wade has caused a wave of outrage across the country as women react to their loss of bodily autonomy. Instead of letting feelings of resignation and defeat take over, below are some words of wisdom from Jewish women activists who fought for reproductive rights over the last century. May their empowering words compel us toward acts of tikkun olam – and maybe, in the words of the late, great Rep. John Lewis, just a little bit of good trouble.

“We had reason to feel that it was worth going to jail if the urgency of limiting offspring was getting to be admitted even by the bench. Direct action, and not parlour discussion, was responsible for these results.”

Despite the ease with which many can access birth control pills and other contraceptives today, it is important to remember that these were not always legal. Though it wasn’t until the 1970s that contraceptives became legal for all Americans, women like Emma Goldman (born 1869 in present-day Lithuania) and Fania Mindell (born 1894 in present-day Belarus) were at the forefront of helping women in need learn about reproductive rights at America’s first birth control clinic, the Brownsville Clinic, in Brooklyn. For nine days in October 1916, the women provided the poor residents of Brownsville with information about birth control methods and gave out various birth control devices, like condoms. After being arrested and charged with violating the Comstock Laws (which made it illegal to disseminate material deemed immoral, “obscene, lewd or lascivious”), the women used their trials as platforms to share their mission to legalize birth control. As Goldman states in her autobiography: Action – even when faced with jail time – is the key to obtaining reproductive rights.

“I stood, rooted to the ground, unable to move, to scream, to run away. But gradually the horror turned into revolt and this revolt shook me out of my lethargy and gave me a new incentive to live…It was up to me to save the life of the mothers, if there was no other way, then by destroying the life of their unborn child.”

— Gisella Perl, “I Was a Doctor in Auschwitz”

Gisella Perl, who was born in 1907 in what is now Romania, used abortion to fight against the Nazis and give women a chance at surviving the death camps, where pregnancy often meant instant death. After she and her entire family were deported to Auschwitz, Perl, an accomplished gynecologist, was forced to run a makeshift medical clinic for fellow inmates. In her memoir, she describes watching Nazi guards beat pregnant women before throwing them in the crematorium alive, which was  the moment she decided to risk her own life to provide potentially lifesaving abortions. Perl felt it was her duty to use her skills to help women who desperately needed abortions and she braved the wrath of the Nazis to do so.

“We can no longer shut our eyes to the 300,000 abortions that each year mutilate the women of this country, trample on its laws and humiliate or traumatize those who undergo them.”

Born in 1927 in France, Simone Veil came of age as the Nazi machine spread across Europe. Like Perl, she narrowly survived Auschwitz and Bergen-Belson but lost nearly her whole family in the Shoah. After liberation, she became a prominent politician who fought for women’s rights amidst the misogyny and antisemitism of her own political party. The quote above comes from a famous speech she delivered on legalizing abortion to an almost all-male audience who heckled her beliefs and her Jewishness (many compared abortion to throwing children into gas chambers). After a hard-fought political battle, Veil’s legislation passed in 1975, legalizing abortion in France – an act that is still called the Veil Law in honor of the woman who got it done.

“One thing I’ve learned over time, over and over again, is that politics and deep change and everything we’re trying to do is like a tree. And too often we think the tree grows from the top, from Congress. Trees grow from the bottom. So what you and I do every day, what’s possible in our community… I mean, today, we could thank the physicians who are supporting and providing reproductive freedom. We can give money to the elected figures who are supporting this vast majority view. And we can just refuse to be intimidated by the protestations of a losing minority.”

Born into an interfaith family in Toledo, Ohio in 1934, Gloria Steinem is one of America’s most influential feminists – some would even say the first feminist – known for her founding role in second-wave feminism, humanitarian causes and continued fight for women’s rights around the globe. Speaking on NPR’s “All Things Considered,” Steinem reacted to the leaked Supreme Court decision that signaled Roe v. Wade’s impending doom. Steinem underscores that we all have a role to play in taking back women’s rights, and that acting locally is an effective starting point.

Born in Mississippi in 1945, Heather Booth credits her Jewishness as an important facet of her activism: “I was also brought up Jewish and learned the values of struggling for freedom from the history, the culture, the holidays – and the texts: ‘Justice, justice thou shalt pursue.’ Twice saying justice, because it was that important.”

Heather is known for her founding role within the Jane Collective, a network of women and allies who worked to provide underground abortions for Chicago women in the 1960s by printing ads directing pregnant women who needed help to “call Jane.” Her advice for what we can do to (re)expand reproductive freedom in America, as recently told to Nicole Phelps for Vogue, resembles Steinem’s advice: we must all act involved.

The words of these Jewish activists serve as important reminders: The feelings of sadness, anger, fear and hopelessness that many of us are grappling with in this new post-Roe world must not lead us into silence and complacency. The women quoted above all had the option to stay silent, but instead risked jail, public backlash, personal attacks and even – in Perl’s case – death by Nazis to fight for women to have control over their own bodies. They also remind us that the struggle for reproductive justice is a long one that requires persistence in the months (and years) to come.

So let’s be like Emma, Fania, Gisella, Simone, Gloria and Heather and find meaningful ways to keep the fight going.