This Jewish Mom Wants to Raise the Resistance 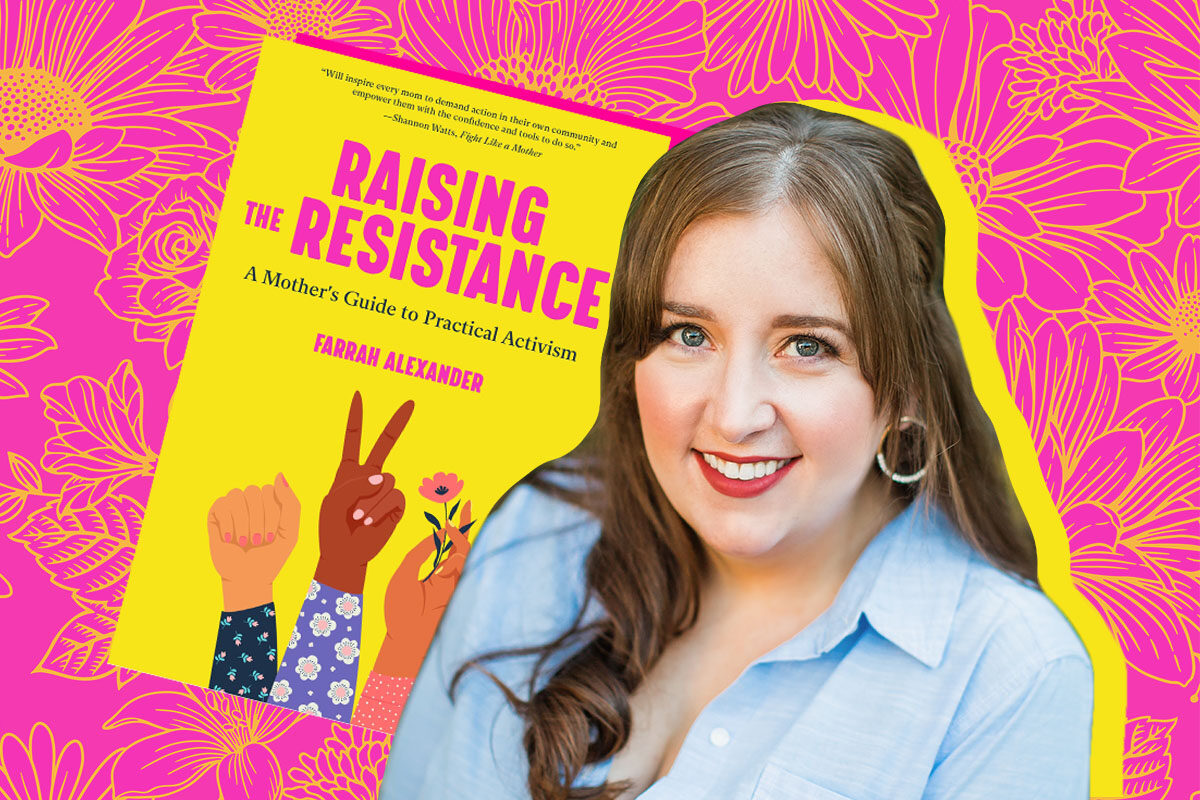 After the election of Donald Trump in 2016, many people across the United States who opposed his policies wondered what they could do. Many mothers, women, and allies attended the Women’s March in cities across the country and the world.

There was a march in Montréal, where I was living at the time, but I couldn’t bring myself to go because fighting what Trump’s administration stood for felt very daunting. I remember asking myself what I could even do to help or where I could even start. Another person who felt frankly helpless at that time was Farrah Alexander, a Jewish mom of two young children. But then she decided it was the time to fight for change.

Almost four years after this turning point in her life, Alexander is now a Jeremiah Fellow with Bend the Arc: A Jewish Partnership for Justice, an organization that aims to unite Jewish people to fight for justice for all people living in the United States, and also advocates for gun safety as a member of Everytown Author’s Council. Notably, Alexander’s first book Raising the Resistance: A Mother’s Guide to Practical Activism has just been published this month. Alexander told me in an interview that she hopes her book Raising the Resistance helps teach the lesson that mothers should “raise [children] in a way that is loving not only to them but the entire world.”

Alexander’s book touches on topics and issues that affect the lived experiences of mothers, including racism, privilege, reproductive justice, toxic masculinity, feminism, and body positivity. In our conversation, Alexander also shared that she thinks that it is important now for non-Black people to follow the lead of Black mothers who “are leading the charge right now fighting racism and police brutality.”

I chatted with Alexander about how Judaism influences her activism, the roles mothers have in creating a better future, and what white Jews could do to help create more inclusive Jewish communities.

This interview has been lightly condensed and edited.

What led you to want to write the book Raising the Resistance: A Mother’s Guide to Practical Activism?

After the election of 2016, [there was] a really vibrant resistance movement in response to the heightened bigotry and misogyny. I noticed this movement was being led by women and especially mothers. Also, I noticed an influx of women engaged in political activism because they felt a moral obligation to rise up, but had never been politically active and felt daunted. I wanted to empower these women and provide some direction about how to incorporate effective political activism in their roles as mothers.

In your own life, how did becoming a mother change your approach to activism?

After Trump was elected, my son was just a toddler and my daughter was a baby. I felt completely overwhelmed and frankly hopeless that their first memories of a U.S. president would be the opposite of a role model. I knew they would hear the president say cruel things I discourage them, as small children, from saying. But more than that, I was so disappointed that the American people knew exactly what kind of person he was and just put a red, white, and blue seal of approval on his bigotry and cruelty. I realized, though, that things don’t have to be this way. There is a path forward and it is up to us, as parents, to raise our children in the pursuit of a more compassionate and just future.

What advice do you have for mothers who want to get themselves and their children more involved in social justice but do not know where to start?

As a member of Everytown Author’s Council, why do you find it important to advocate for gun safety as a mother?

Gun violence is a uniquely horrific problem in this country. It makes me ill to consider that 20 first-graders were once murdered in a mass school shooting and we collectively swore, “never again” — but we’ve allowed more than 2,600 mass shootings to happen since. We senselessly lose 100 Americans every day to gun violence. As a Jew, I’ve always been drawn to the Talmudic principle of whoever saves a life is therefore saving the world. There are many common-sense solutions to saving lives taken from gun violence, and I’ll continue to fight for them.

Currently, you’re a Jeremiah Fellow with Bend the Arc: A Jewish Partnership for Justice. How has Judaism played a role in your activism?

I was born a Christian and discovered I was Jewish as an adult. I always felt a connection to God, but realized Christianity wasn’t for me, as my beliefs didn’t align and I was disillusioned by the lack of attention to social justice and rejection of the LGBTQ community at the time. In college, I was enrolled in a world religions course and when I read more about Judaism, I immediately thought, “Oh. That’s it. I’m supposed to be Jewish.” I began learning and reading more about Judaism, eventually visited local shuls, and found one that felt like home.

A big part of what I love about being Jewish and what invigorates me about Judaism is the call towards social justice. Although many Christians and churches also pursue social justice, I grew up seeing members of the LGBTQ+ community being shut out of church and, even as a child, it made me feel disillusioned with the words we recited on Sundays. To go from that to a rabbi telling me about the orange on the Seder plate was just incredible. I feel so at home in a synagogue. My Hebrew name is Shamira, which means guardian and protector, which feels so fitting to me as a mother and activist.

A theme in your book is antiracism. What role do you think white or white-passing Jewish mothers have in help making Jewish circles more welcoming to Jews of Color?

I think we need to reject any hierarchy of Jewishness. Whether you ever go to shul, converted, don’t know Hebrew, are secular — whatever — if you’re Jewish, you’re Jewish. Period. So Jews of Color should feel fully welcome in Jewish spaces. Also, we need to listen to Jews of Color and really honor their perspectives. One of my leaders in Bend the Arc is a really brilliant organizer and Jew of Color. I spoke to her about some of the struggles I was having when antisemitism arose in the fight against racism. She just mentioned how living under the legacy of racism affects this perspective and it completely shook the way I perceived what was happening. As a white Jew, the perspectives of Jews of Color are absolutely invaluable, especially right now.

What tools do you hope that mothers who read Raising the Resistance implement in both their personal activism and as parents who can influence their children?

I hope mothers realize their power. The weight of the world’s problems feels so heavy right now and it’s so easy to feel powerless. But we have an enormous responsibility as we are shaping what the future looks like. We can look at the legacies of injustice and cycles we’ve fallen into and declare it ends with us.

I mention many practical ways you can apply activism in a way that fits your life — fighting unjust policies, political campaigning, supporting fellow mothers, ending toxic behaviors — but I really believe the most powerful thing we can do is to love our children and raise them in a way that is loving not only to them but the entire world.