This Jewish Mom Was the First Woman to Bike Around the World — in 1894! – Kveller
Skip to Content Skip to Footer

This Jewish Mom Was the First Woman to Bike Around the World — in 1894! 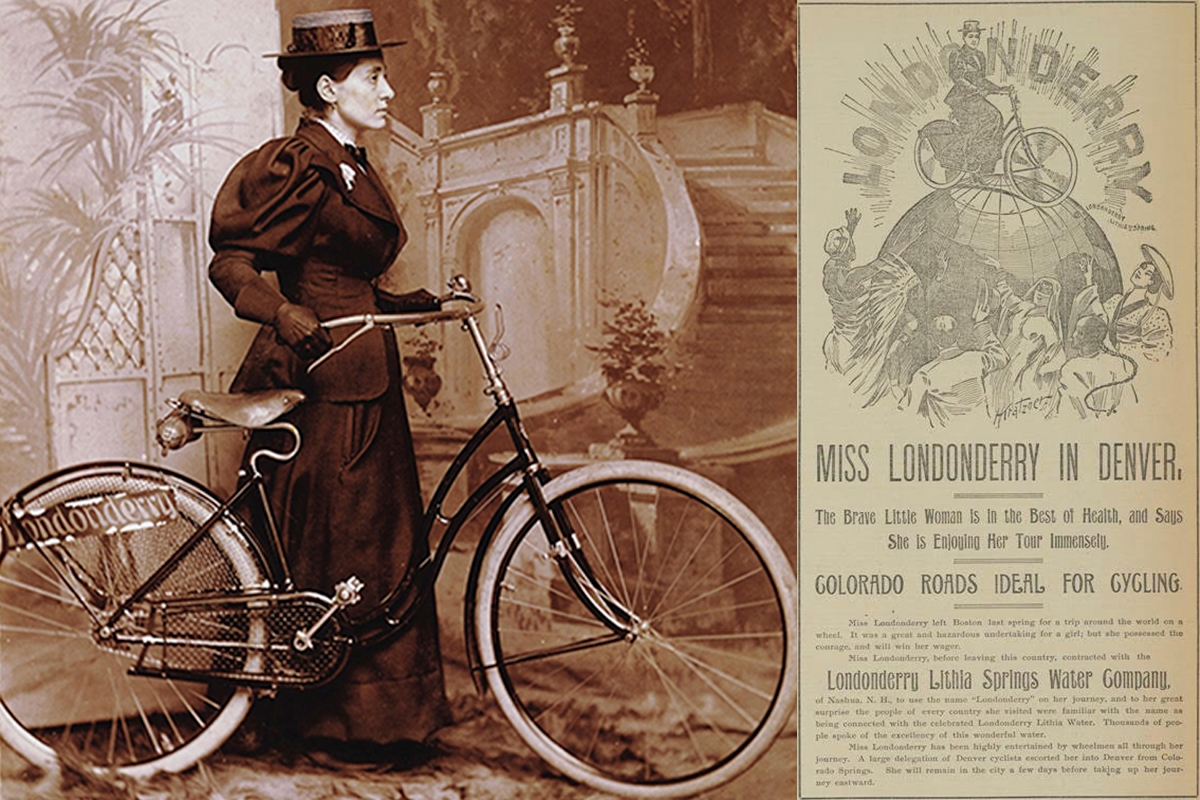 Did you know that the first woman to bike around the world was a Jewish mother? That’s right, Annie Cohen Kopchovsky — otherwise known as Annie Londonderry — began her trip on June 25, 1894, leaving behind her husband and three children to ultimately circle the earth in 15 months and win a $20,000 bet against her.

Born Annie Cohen in 1870 to Jewish parents in a village near Riga, Latvia, the family immigrated to the U.S. and lived in the West End of Boston. After marrying a religious man, Max Kopchovsky, in her late teens, Annie began working part-time selling advertising space in Boston newspapers. While working, she learned of decorated civil war veteran and entrepreneur Colonel Pope, who was marketing bicycles — a relatively new invention at the time —  to women. A man named Thomas Stevens had traveled the world by bicycle in 1884, and returned within three years. Pope challenged a woman to do the same, as an attempt to show that bicycles could be just as marketable to women as to men — despite, yes, societal hesitations about the bicycle’s risks to “women’s purity.”

Even so, first-wave feminists coined the bicycle as a tool of women’s liberation: giving them freedom to travel when and where they pleased — without men. Legendary suffragist Susan B. Anthony said in 1896: “Bicycling has done more to emancipate women than anything else in the world.”

Annie was 24 years old at the time she took the challenge, leaving behind three young children. Starting in Boston, she hung a placard advertising Londonderry Lithia Spring Water Company from her bicycle and accepted $100 as sponsorship by the company — and thus she became known as Annie Londonderry.

Annie first biked from Boston to Chicago in three months, where she had to exchange her bike for a lighter one. She then took a boat to France, and then to East Asia for a tour through countries including Egypt, Sri Lanka and Singapore  —  the wager said nothing about how many miles she had to bike! Her journey wrapped up by biking from San Francisco to Chicago, returning to Chicago in September 1985 only 15 months after her initial departure.

Perhaps not surprisingly, Annie’s journey brought her international fame — newspapers around the world reported on her journey. She loved the limelight, declining multiple marriage proposals — while often hiding the fact that she was married. Her ambition led her beyond the norm for women of her time: Annie clearly valued her hard-earned independence. She enjoyed the fame of her journey, as well as providing for her family — in other words, a typically male role. She took a risk, and with it, empowered women to do the same.

Sadly, Annie’s fame was short-lived. Her story was quickly forgotten as the legacy of first-wave feminism spotlighted more politically-oriented feminists like Elizabeth Cady Stanton and the aforementioned Anthony.

That is, until writer Peter Zheutlin received a letter from a stranger in 1993. It turns out, Peter — the author of New York Times bestseller “Rescue Road” — was Annie’s great-grandnephew. Inspired by the letter, Zheutlin began to look into this fascinating family history. His research culminated in his first book about Annie, his 2007 non-fictional account of her journey, “Around the World on Two Wheels.” This, in turn, inspired his new novel: “Spin: A Novel Based on a (Mostly) True Story.”

Zheutlin’s epistolary novel tells Annie’s story from a first-person perspective, in the form of letters from Annie to her granddaughter, Mary. Zheutlin chatted with Kveller all about his inspiration for the novel, his real-life collaboration with his long-lost cousin Mary, and the mixed response to Annie’s journey. Check out our conversation below.

What kind of stories did you hear about Annie while you were growing up?

I actually didn’t know of her existence until I was 40. This was not part of a family lore; one letter can change your trajectory. I got a letter in 1993 written to my mother, whose maiden name is Cohen. Someone named Michael Wells had picked up on Annie’s story, and he thought my mother was related to her. He laid out the genealogical research, and we learned that Annie lived at the same address as my great-grandfather. So, I responded on my mother’s behalf, she was actually worried it was a shakedown. But no one in my circle of the family really knew about Annie, so I decided to pick up the baton in 2003.

You wrote a non-fiction book about Annie in 2007, “Around the World on Two Wheels.” What compelled you to tell this story in a new way in 2021?

My wife ordered me to! I spent four years finding everything I could about Annie. I hired a specialist in Jewish genealogy. The first book got published and the story began to ripple out, there was an episode on the Travel Channel, a musical in Toronto, a play being produced in Italy. And then in November, 2019, the New York Times ran an overlooked obituary series about mainly People of Color and women, and there was one about Annie which relied mainly on my book.

My wife, Judy, is very involved in the book club world. She said to me that all the book clubs want to read historical fiction about women they don’t know, or a period of history they don’t know about. She told me, “If you don’t write this, someone else will.” It was really Judy pushing me to pick up the story again. I had already done all the research.

How did you decide to write a first-person novel?

Annie is a character who built her own legend based on storytelling — she also made up some of the story. I’ve been living with her in my head now for close to 30 years. It almost seemed natural to do this directly, though there is the question of whether a male voice can accurately portray a woman. She left very little in terms of a first-person account herself — no diary or anything. I wanted a chance to give her a say.

I was in touch with [my cousin] Mary [Annie’s granddaughter] before I wrote the first book. Mary always felt she was supposed to do something with this legacy. She showed me the first photo I ever saw of Annie. Mary was 16 when Annie died, and she knew her pretty well.

What was your relationship with your own grandmother like? Did she, like Annie, yearn to accomplish something beyond the ‘cult of domesticity’?

I can’t say that either of my own grandmothers lived lives that were very different from women of their time. My own mother was a very independent minded and politically active woman. She took us to see Lyndon Johnson, she was involved in the anti-war movement, and she worked in a peace center. Even so, she was a housewife; she went to Radcliffe and went back to school for her Master’s after having kids. No one in my family comes close to the radical departures that Annie took in her life. In terms of feminism, one of the things Annie so skillfully did was exploit the popularity of the bike — she exploited the era of globalization, the curiosity of the world beyond their neighborhoods, and she exploited the spirited debate over women’s equality. Mary said to me that Annie wasn’t the feminist who was marching in the suffrage movement, but absolutely a feminist in that she believed in a woman’s right to self-determination.

How do you think that Annie’s Jewish values shaped her choice to take the challenge?

For this book, I interviewed Jonathan Sarna at Brandeis, and he reminded me that one thing that stood out in that day and age is the enduring jewish value of the “raising and education of children.” So Annie’s choice was radical for anyone, particularly in an Orthodox Jewish community. I suspect that Annie was not a religious Jew, but did define herself culturally as Jewish. Her family probably didn’t celebrate how she defied this Jewish norm. I think that’s one reason this story wasn’t passed down in my family. There was embarrassment and humiliation for her husband, for my great-grandfather.

Annie also worked outside the home, she labored hard to provide for her family as a financial necessity, but also a part of her that was motivated to lift her family up economically. She was very entrepreneurial. So many Jews who fled Europe had to reinvent themselves; this is an extreme example. While she bucked her role as wife and mother, she also was emblematic of it in her intention to provide for her family. It also didn’t seem like she intended to leave the family permanently, she eventually had a fourth child with Max after the bike trip.

What about Annie’s story do you think will resonate most with readers today?

I think all of us at one time or another think about what other paths might we have traveled, what would it be like if we lived somewhere else. Everyone has an admiration, regardless of how you feel about her as a character, for people who are willing to defy the dimensions of their times who move broader society forward. Who knows how many other women looked at her story and made a decision inspired by her.