Need an Escape? Add These Jewish Historical Novels to Your Reading List! – Kveller
Skip to Content Skip to Footer

Need an Escape? Add These Jewish Historical Novels to Your Reading List! 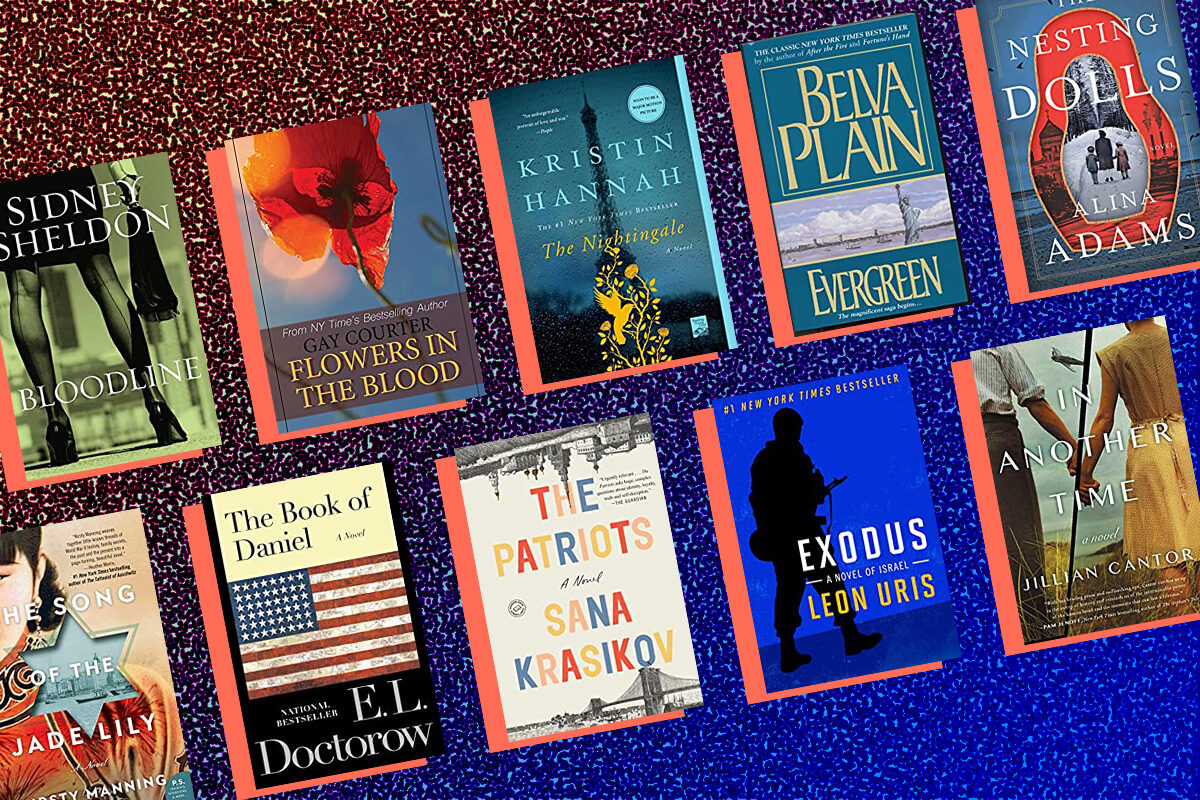 Were you that kid? The one who, in middle school, was sneaking adult novels and reading them in secret? Did you love the historical fiction ones best? The exotic faraway places; the strange, courtly customs; the sweeping romance? Most of all, were you surprised and delighted whenever you stumbled across a Jewish character?

Representation matters. As an immigrant from the USSR growing up in the United States, I never expected to encounter a modern-day heroine with my own background. Historical fiction almost exclusively presented Russian Jews from The Fiddler On the Roof era. And although I devoured those books through my teen years — and still do — it wasn’t the same. Living in Russia was not the same as living in the USSR, and being a kid from the USSR in 20th-century America was definitely not the same as being an immigrant Russian kid at the turn of the century.

No book of historical fiction spoke to my particular experience. You know what they say: If you can’t find the book you want to read, write it yourself.

The Nesting Dolls, out now from HarperCollins, is set in Odessa, USSR, in the 1930s (during Stalin’s Great Terror, when being a Jew was just one of the many things it was not great to be), as well as the USSR in the 1970s, during the Jewish refusenik movement, and, finally, in the present-day immigrant community Brighton Beach, Brooklyn.

It stands on the shoulders of some of my favorite Jewish historical fiction novels. Below are nine examples of standouts of the genre.

This murder mystery/family saga is based on the Rothschilds, who managed to become the richest family in the world starting in the 1760s (despite being forced to live in the Jewish ghetto of Frankfurt). Like the real-life Rothschild patriarch, Bloodline’s Samuel Roffe sends his sons all across Europe to build a financial empire. The fictional Roffe family deals in pharmaceuticals, not banking, and don’t marry off nieces to their uncles in order to keep the family fortune close. But there is still scandal and sex galore! (Pro tip: Skip the movie starring Audrey Hepburn.)

A classic tale of an immigrant who comes to America, works hard, makes enough money to send son to Yale… who then marries a non-Jew, and their child runs off to a kibbutz. Evergreen didn’t invent this rags-to-riches-to-ungrateful-offspring genre, but it’s among the best of the bunch. If you’re going to read only one traditional New York Jewish family saga, it should be this one. (Also, the 1980s miniseries starring Lesley Ann Warren and Armand Assante is worth a look.)

Flowers in the Blood by Gay Courter

“Don’t be so Ashkenormative,” my oldest son loves to say when we discuss Jewish history. And he’s right. This novel, set in India from 1878 to 1898, is a great reminder that there’s more to the Jewish community than Europe. You’ll learn everything you’ve always wanted to know about the opium trade, as well as Sephardic marriage customs, as headstrong Dinah Sassoon attempts to find both love and professional fulfillment in a time and place when women couldn’t count on either. I read Flowers in the Blood as a teenager and its unique setting and story has stuck with me ever since.

The Nightingale by Kristen Hannah

You can’t talk about Jewish historical fiction without mentioning World War II and the Holocaust. While there are literally thousands of books on the subject, this 2015 title was a huge popular hit, tackling the big issues by focusing on small, personal stories. In Nazi-occupied France, one sister hides a deported Jewish friend’s child, while another helps downed American and English pilots escape the country. What makes this particular tale stand out is how matter-of-fact both women are about their tasks. There’s no melodrama, just two people understanding that there’s only one right thing to do — then doing it. It’s a particularly female point of view.

In Another Time by Jillian Cantor

Another World War II tale, this time set in the heart of Germany — but with a twist. Hannah is a Jewish violinist, Max is a German bookseller, they are madly in love but cannot marry. There are the Nuremberg laws, Kristallnacht, the deportations, but, in a refreshing twist, Cantor skips the majority of the war and jumps forward in time. Hannah survives, but doesn’t remember anything that happened over the past five years, while Max seems to have disappeared off the face of the Earth. If you think you’ve read dozens of stories like this before, trust me on this one: You haven’t.

The Song of the Jade Lily by Kristy Manning

I first picked up this novel because I was intrigued by its setting: Shanghai during the Japanese occupation. I didn’t even realize it was about Jews until I started reading it. (Later, my husband helpfully pointed out there was a Star of David on the cover. Oops!) This tale of European Jews who escaped to Shanghai alongside Chinese locals struggling to survive shines a spotlight on a lesser-known aspect of World War II history. Readers used to sad, noble Jewish refugees and meek, obedient Asians will be delighted how The Song Of the Jade Lily avoids cliches and presents non-stereotyped, well-rounded characters of all ethnicities. Still, its final plot twist — which depends upon a character not being able to tell the difference between a 1-year-old and a 2-year-old — does strain credibility.

The story of what happens after World War II as the traumatized Holocaust survivors make their way to Israel is a page-turner and a classic. The fictional Ari Ben-Canaan smuggles refugees from the real-life camps on Cyprus into British-occupied Palestine, and protects his kibbutz during the 1948 War Of Independence. Meanwhile, other fictional characters find themselves in real-life situations like the Acre prison break, and the battles for Safed and Jerusalem. (There is also a movie. Everyone in it manages to be very annoying.)

The Book Of Daniel by E.L. Doctorow

Author Doctorow insisted that his family saga was not the tale of the real-life Rosenbergs. It could be the story of any pair of married New York Jews who were convicted of passing atomic secrets to the Soviets and were put to death, despite pleas from the Jewish community and their two school-aged children. Doctorow stressed that the story isn’t about whether or not the parents were actually guilty, but about the damage their political choices did to the children left behind. (There is a movie. Mandy Patinkin doesn’t sing in it, or order anyone to prepare to die.)

The Patriots by Sana Krasikov

While Julius Rosenberg was passing on ultimately worthless nuclear secrets to the Soviets, other American Jewish socialists took their commitment to the USSR even further — they returned to the country their parents had fled to help build a new Communist society. For the majority of them, this proved to be a very big mistake. In The Patriots, Flora leaves the U.S. for the USSR. Her passport is confiscated and she is first forbidden from leaving, then imprisoned for pro-Jewish work she did during the war, where she’s commanded to incriminate others so that they, too, may be arrested. Her political choices also do a number on the son she left behind.

These are some of my favorite Jewish historical fiction titles. What are yours?