This Jewish Real Estate Developer Pushed to Integrate the Suburbs 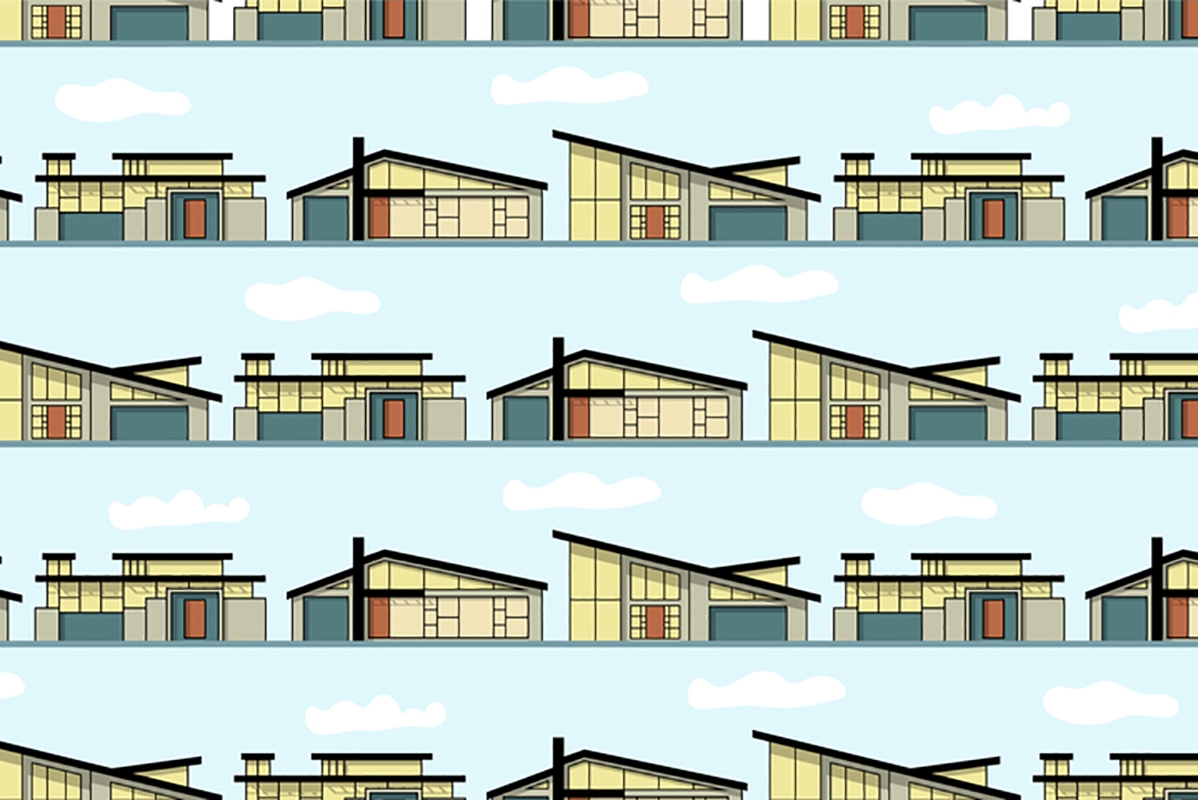 To those with a passing knowledge of architecture, the name Joseph Eichler is synonymous with the iconic mid-century modern homes that help define suburban Los Angeles and San Francisco.

Between 1949 and 1964, the Jewish developer’s eponymous company built some 11,000 tract homes for middle-class Californians. Thanks to details like post-and-beam construction, open floor plans, and indoor/outdoor living designed around central atriums, “Eichlers,” as they are colloquially known, remain very much in demand by design buffs today.

It turns out, however, that Eichler’s work was groundbreaking in another, perhaps more significant way: He was one of the first major developers to take a stand on housing discrimination.

A recent story in Dwell magazine highlights Eichler’s longstanding yet little-known commitment to undoing racist housing policies. He was one of the first builders to sell a home to anyone who could afford it — regardless of their race, ethnicity, or religion.

“I really do think Joe may have been motivated by discrimination against Jews back in New York,” Dave Weinstein, features editor at CA-Modern Magazine and the Eichler Network, told Dwell. “It was common not just in housing, but in society in general.”

Eichler was born in New York City in 1900, the son of German Jewish immigrants. According to a profile of the builder that was published on the Eichler Network, he “was raised in a politically liberal family that revered Franklin Roosevelt, and grew to maturity in the culturally diverse community of New York City.” He began his career on Wall Street and later joined the wholesale poultry business run by the family of his wife, Lillian, who was the daughter of Polish Jewish immigrants.

The couple and their two kids, Richard and Edward, known as Ned, relocated to California in 1940. There, they rented a Frank Lloyd Wright home — a move that eventually inspired him to launch a new career building similarly spacious, open modern homes.

At the time, housing discrimination throughout the country was rampant — and legal. As Beryl Satter describes in her book Family Properties: How the Struggle Over Race and Real Estate Transformed Chicago and Urban America: “In the 1930s, the U.S. appraisal industry opposed the ‘mixing’ of the races, which it believed would cause ‘the decline of both the human race and of property values.’ Appraisers ensured segregation through their property rating system. They ranked properties, blocks, and even whole neighborhoods according to a descending scheme of A (green), B (blue), C (yellow), and D (red). A ratings went to properties located in ‘homogenous’ areas — ones that (in one appraiser’s words) lacked even ‘a single foreigner or Negro.’ Properties located in neighborhoods containing Jewish residents were riskier; they were marked down to a B or C. If a neighborhood had black residents it was marked as D, or red, no matter what their social class or how small a percentage of the population they made up.”

“These neighborhoods’ properties were appraised as worthless or likely to decline in value,” she continues. “In short, D areas were ‘redlined,’ or marked as locations in which no loans should be made for either purchasing or upgrading properties.”

“Redlining,” as the practice was known, along with similarly racist policies, deepened as suburban development swelled in the post-World War II era. And yet, as Jewish wealth grew, many white Jews had the luxury of “passing,” while African Americans and other People of Color did not. As Hannah Lebovits notes on our sister site JTA, racist housing policies continue to persist, even if policies were deemed illegal by legislation such as the Fair Housing Act of 1968. “The era of ‘No Dogs or Jews’ is over,” she writes. “When they go to apply for a mortgage, to rent an apartment or to access social services, European Jews do not have to check a demographic box other than ‘white.’”

“As a result,” she adds, white-presenting Jews “have gained the privilege to access white spaces in a way that Black people have not.”

By contrast, non-discriminatory housing was a cornerstone for Eichler, who launched his company in 1947. (His son Ned, born in 1930, joined the business in 1954.) A pamphlet, “Race and Housing: An Interview With Edward P. Eichler, President, Eichler Homes, Inc.,” first published in 1964, put it bluntly: “More than 10 years ago Eichler Homes quietly ruled out racial restriction on its sales,” it reads, noting that Asian families bought Eichlers in 1950 and the company made its first sale to a Black family in 1954. “The open occupancy policy was voluntarily adopted well before the enactment of California’s fair housing legislation.”

Reportedly, Eichler offered to buy back homes from anyone who complained about their new neighbors. He also resigned in protest from the powerful National Association of Home Builders in 1958, when the vice president of the San Francisco branch said: “It is a generally accepted theory that minority races depreciate property values. There may be no statistics to prove it, but as the representative of homebuilders, it is the theory under which I operate.”

Eichler responded: “Since I am the largest and probably the most prominent builder-member of this association, it would seem that these statements [opposed to the court ruling] tend to reflect my views, and I wish to state emphatically that Eichler Homes in no way practices any kind of discrimination.”

Most of the time, however, Eichler Homes’ non-discrimination policy was not broadcast to prospective buyers and local governments. Instead, the builders preferred to quietly sell to anyone who was qualified. Activism on a larger scale, however — specifically, at the state and federal levels — was a different story. Behind the scenes, the company pushed for widespread fair housing laws in California and for the federal government; Joe Eichler even accepted an invitation to testify before the U.S. Civil Rights Commission of 1960.

“They were simple merchant builders who found that doing the right thing did not hurt resale value,” Ocean Howell, a professor at the University of Oregon, writes in his paper, “The Merchant Crusaders: Eichler Homes and Fair Housing, 1949–1974.” “Eichler Homes demonstrated that housing could be integrated without fundamentally altering the character of the suburbs, instigating battles with municipalities, or hurting the bottom line.”

While housing discrimination remains rampant across the country today, the Civil Rights Act of 1968 officially made housing discrimination illegal — and the social activism of the Eichlers played a major role in helping such legislation come to pass. “The most tiresome thing one hears about racial discrimination is the frequent advice, ‘You can’t legislate morality,’ or ‘You can’t change people with a law,’” Ned Eichler told a California legislature committee in 1961. “There is a good deal of evidence, from the time of Moses, that you can do exactly that.”