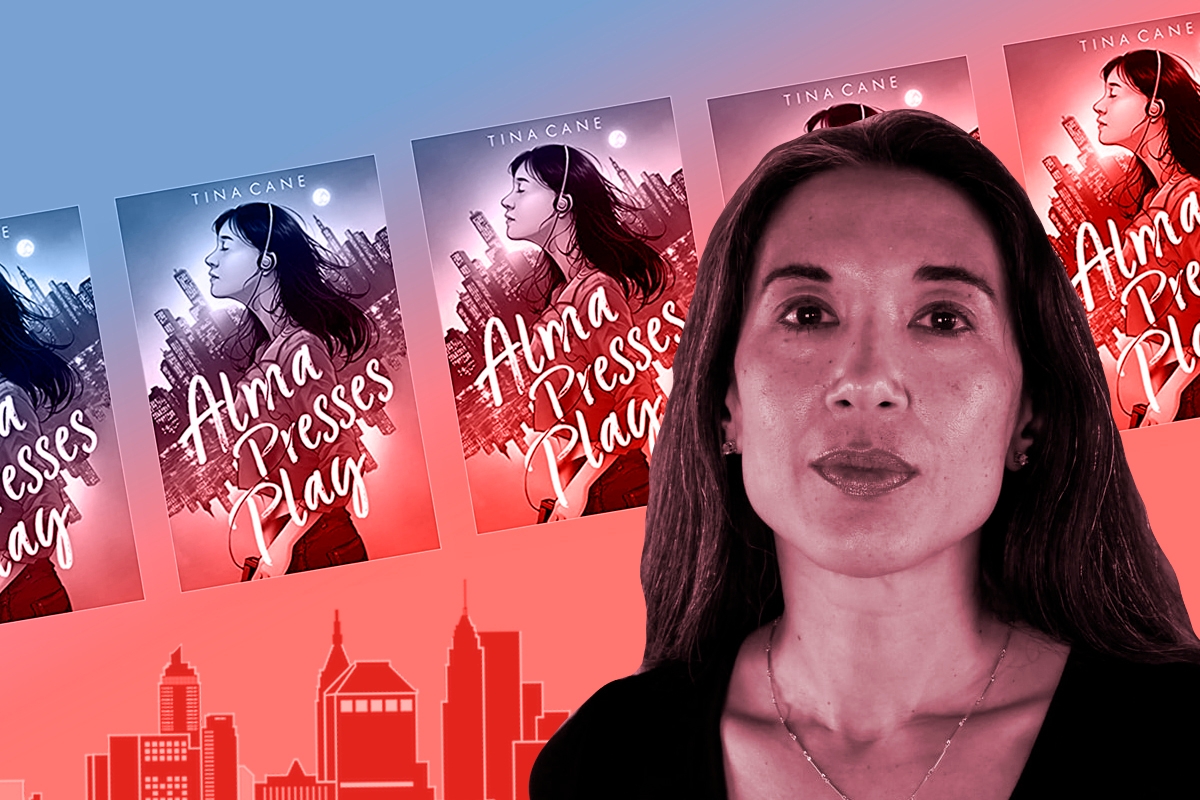 Meet Alma, a 13-year-old half-Ashkenazi Jewish, half-Chinese girl who is coming of age in New York City in the 1980s. She loves to ride her bike and listen to music on her Walkman — everything from the Pretenders to Michael Jackson.

Alma is the creation of Tina Cane, herself a Jewish and Chinese American writer who grew up in downtown Manhattan. In her new book, “Alma Presses Play” — which is actually a YA novel-in-verse — Cane tells a captivating story that’s inspired by her own life. In the book, young Alma attends middle school, deals with her parents’ divorce and gets her first period — exploring her multicultural community and riding her bike along the way.

This innovative YA novel creates a story entirely through poems, with verses that describe a character, like Alma’s friend Maureen, or a story, like how Alma’s Jewish grandparents immigrated to America. The poems demonstrate how Alma experiences her biracial family, from playing mah jongg with her Chinese grandmother to hearing her Jewish grandmother’s jokes about bar mitzvahs.

Cane, the poet laureate of Rhode Island since 2016, is passionate about bringing poetry to kids and teens; she’s worked as a French, English and creative writing teacher in both New York City and Rhode Island. In an article in the Boston Globe entitled, “We Should Inoculate Our Young With Poetry,” Cane argues that teaching children poetry “boosts existential resilience and creative grit. It gives them tools to look inward when the outside world is falling down.”

Cane chatted with Kveller about her own 1980s childhood in New York City, finding pride in her Chinese and Jewish identities, and raising teens in these changing times.

My family history is a little fractured and more chaotic than the character of Alma, but I’m half Chinese, and the dad who raised me was Jewish. He had Russian and Polish-Jewish immigrant parents from Brooklyn. So, the character Alma shares a lot of biographical elements with me; I was 13 in 1982 and I grew up in the East and West Village. Some of the friend group in the book is based on friends that I had, elements from my life.

This was the first novel in verse I’ve written, and it didn’t want to be a collection of poems. It wanted to be a story told through the poems. And so, I really had to figure out how to help the characters’ voices develop. Even when I’m writing poetry; I’m oftentimes using first person, but it really is a speaker. However, as I was writing this novel in verse, Alma the character became a distinct voice in my head that was separate from me.

How much of Alma the character is based on you?

I have a daughter named Alma, so I named the main character after her. But when I think about Alma the character, I wish I had been a little more like her when I was her age — she’s a little bit more grounded and self-possessed than I was. I think that my own childhood was a lot more chaotic and fractured and dysfunctional. YA is a very edgy genre right now; there’s a lot of sex and drugs and rock and roll happening in YA, it really is pushing the boundaries. But Alma’s 13-year-old life is a lot more innocent than mine was. And I kind of wanted to protect her, I really wanted the book to be about her finding her way through witnessing moments around her. She’s a little bit more innocent or less experienced, and more grounded.

What was your relationship like with your Jewish identity as a kid? Alma is very close with her Jewish grandmother — were you?

I had very formative experiences with my grandmother. And it’s a funny thing to be a New Yorker — there’s a kind of cultural thing that happens to people in New York, growing up downtown in the ’70s, ’80s, it really was a melting pot. It wasn’t nearly as economically segregated as it is now. So even though racial divisions and neighborhood tribalism always existed, there was this much more fluid [atmosphere] — for example, kids of all backgrounds learning Yiddish words and expressions. Puerto Rican kids knew a couple of words in Chinese. There was this collective cultural thing that happened to a certain extent.

We weren’t religious Jews and my dad’s parents were basically socialists, so they weren’t really going to synagogue or anything. But culturally, especially in New York City, the intellectual history and pride around being Jewish was definitely present in my life, and it definitely impacted me. I definitely had huge awareness and presence in terms of my Jewish identity.

In what ways are you passing this Jewish pride to your kids?

I have three children: a son who’s about to be 18, my daughter is going to be 15 and I have an 11-year-old son, too. So it’s interesting in terms of identity because, as they get older, they become more and more aware of the issues surrounding all manner of identities, certainly with the outer world and Black Lives Matter. They’re really coming to grips with the realities of how different people are treated in different ways, for a variety of reasons: religion, ethnicity, color of your skin, and so forth.

When I was growing up, we celebrated Easter, we celebrated Christmas, we celebrated Hanukkah, to a certain extent, and if it was Passover we’d go to a friend’s house for a seder one year, or maybe the next year we wouldn’t. It was really kind of a smorgasbord of rituals and belief systems. With my kids, a lot of times it’s food — so much of their culture is transmitted that way because we’re not practicing a particular religion, and we’re not observing the holidays in the most traditional ways.

What message do you have for parents of biracial Jewish kids?

It’s a great question. Someone asked me the other day about the book, what message that I want young readers to take away from it. And said something to the effect of: There are so many ways that we can define ourselves… which car you drive, or what type of degree you hold, or the job you have, or which zip code you live in, or what the color of your skin is. And society is more than happy to give you that box and shove you in there.

No matter what mix anybody is, I think that it’s really important to understand foremost that each person is an individual. I don’t think of myself through my ethnicity or the fact that I’m mixed. I think of myself as Tina, and I’m those things, but I’m also so many other parts of myself that are not visible to the eye. That has to do with the way I walk through life, the decisions I make, the type of people I choose to call family and friends — those are the things that actually define me the most. I’d like for kids reading the book to realize that, actually, your voice is really going to be particular to you, and you can define it. And society will try to impose, and your family may try to impose, but you get to choose. And there’s a portion in the book where Alma’s riding on her bike, and she says “free to be me.” And she feels free from her family and friends, just riding on her bike kind of thinking about stuff. Because that is really the essence of her identity.

What were some of your favorite songs from the ’80s? And what are you listening to today?

So, I’m stuck in the ‘80s. I’ve been listening to the Pretenders nonstop for the last 72 hours. And then this morning, like, my son was like, “Oh my gosh, can you please just change the music in the car?” So I switched to the Rolling Stones. But I listened to a lot of the Clash, and a lot of early hip-hop, like Run DMC and Kurtis Blow. It’s incredible how, listening to some of the songs that are in the book, I can feel myself being transported — I can feel some of the emotions that I felt at the time when this music was in my life. It’s such an interesting, kind of sensory journey. I was telling my kids, “You have no idea how big the Walkman was. Like, you have no idea.” It changed my life! For me, to be able to put on headphones and create my own zone, and not be disturbing anyone else, was such a game changer in terms of autonomy and differentiation for a young person. You didn’t have to, like, slam the door, you could just kind of retreat to your own little world, but still be in the room. And you know, the character does that every once in a while. It’s a coping mechanism.