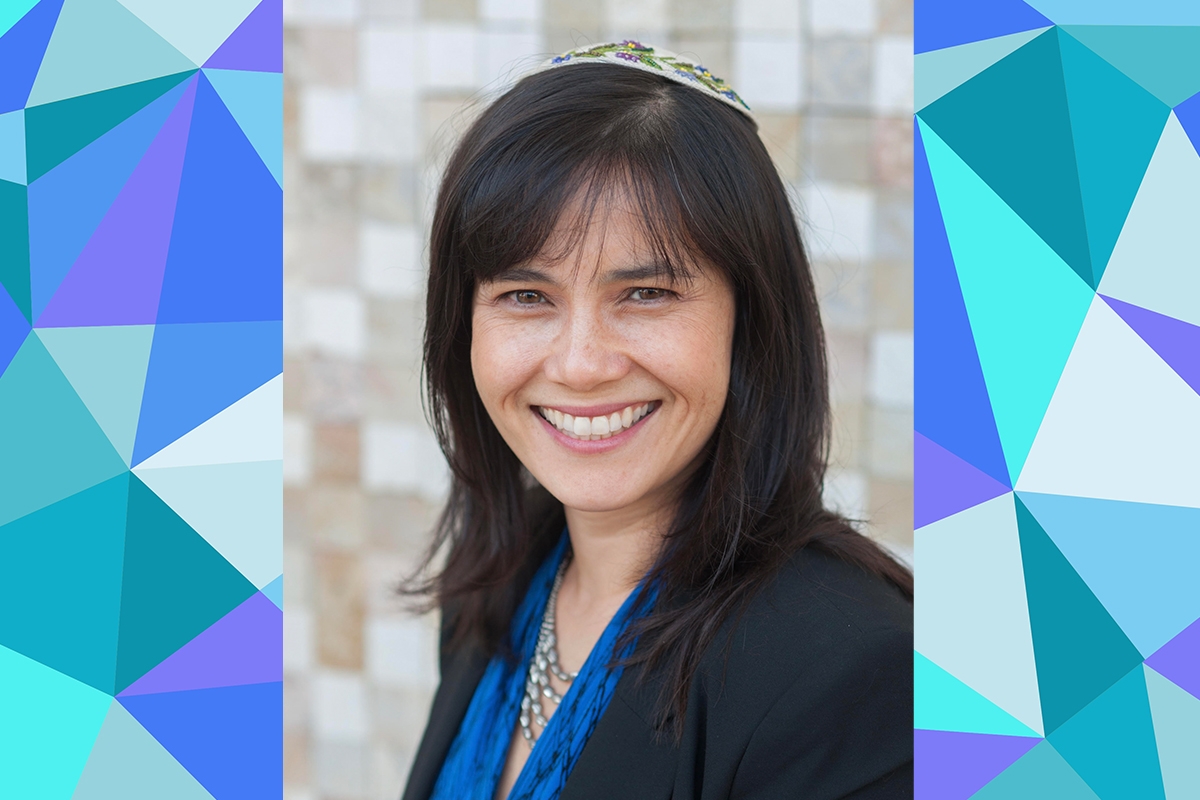 Rabbi Jacqueline Mates-Muchin is a Jewish leader on the rise. In addition to being the senior rabbi at Temple Sinai, a reform synagogue in Oakland, Calif., and a mom of four, Mates-Muchin is making history as the first Chinese-American rabbi.

An alum of Hebrew Union College, where she wrote a master’s thesis entitled “The Analects of Confucius and Its Parallel in Early Rabbinic Thought,” Mates-Muchin is committed to helping established Jewish institutions become more inclusive, drawing upon her unique experience as a member of “two peoples, two traditions”.

Kveller chatted with Mates-Muchin about her upbringing in San Francisco, the integral role of her family in her Jewish journey, and the nuances of anti-racism work within the Jewish community.

What inspired you to become a rabbi?

I love the study of Judaism and study of religion, in general. I had thought about going into academia, and my dad actually suggested that I think about the rabbinate. I think that came from just wanting to be with people, with practitioners of the tradition. It’s really a rewarding way to move through life.

We [rabbis] get to spend really meaningful moments with people, some of the most significant moments. And, on a regular basis, we are able to wrestle with what’s most important, what is our purpose, and how we find meaning in the things that have happened to us. It enables me to be very thoughtful about my own sense of purpose and my own sense of what I want life to mean.

What are some of your favorite Jewish memories from your childhood?

Jewish memories from my childhood really surrounded my family: my parents and my four siblings. Seders around the table, holidays, and those kinds of things stand out in my mind. I started engaging a bit more in our synagogue community when I was a teenager, kind of on my own. My family, though we always belonged to a synagogue, and we each became bar and bat mitzvah, weren’t super active.

Can you share more about what being Chinese American means to you? Are there any Chinese customs or traditions that mean a lot to you?

I have a very large Chinese family, my mom has lots of cousins and siblings, and I have lots of cousins. My Chinese grandparents lived nearby, and we spent a lot of time with them as well.

My dad’s family came over from Austria, in the late 1930s; they fled Nazi Europe.

The Chinese side of my family came over to the U.S. in the 1800s, so it’s actually been here for much longer than the European side of the family. But there, too, is a lot of history, a lot of generations in San Francisco.

My parents were very clear, all the time, that we were super lucky that we came from two really rich, really ancient traditions. And for us, the two didn’t clash. It never clashed; it was just kind of seamless. Aspects of both traditions place a lot of focus on family. My parents usually talked about the focus on family and focus on education, in terms of the similarities, but I also just think that those are similarities in my families, too.

Having such a great, established Chinese community in San Francisco enabled us to be a part of that world, and to be very comfortable and in Chinese spaces and with that aspect of our culture and our heritage. I very strongly identify as a Chinese American. I mean, my family’s been here such a long time. When I get nostalgic about where my family comes from, it’s those parts of San Francisco, that really speak to the Chinese part of me.

In a recent interview, you said you had some challenging experiences with your Jewish peers growing up — sometimes people didn’t believe you were Jewish. And now you’re a Jewish leader. How does your past experience in Jewish communities help shape your leadership today?

I think one of the most compelling aspects of Judaism is the sense of belonging — belonging to a community, belonging to a people through time and space, that we all taste a little bit of eternity, because we can see ourselves as a part of this Jewish continuum that goes back thousands of years and will go forward thousands of years. Those kinds of things that were said to me, that’s what challenges that feeling [of belonging], and I think the problem is, it’s so essential to Judaism. So, I want to make sure that my community, and the Jewish community, gives the opportunity for everyone to feel that sense of belonging, that sense of recognition that this is who they are, and that they’re a part of that continuum.

I think that my experience gives me a kind of sensitivity — at least, for people who have had similar experiences regarding race. I hope that it enables me to be humble enough to recognize that there are lots of areas where people feel like they are isolated and ostracized, and that I always have to be open. We always have to be open to hearing the ways in which people see themselves. Within Judaism, how people understand their own identities vary, and the ways that people feel like sometimes they are pushed out and marginalized. We’re not done when it comes to inclusion, when it comes to belonging. We have to be open so that we continue to learn who our community is, and we continue to broaden that perspective.

What helped you through these challenging interactions?

My parents were key. I remember them sharing that people might say strange things to me. That they might say something that’s problematic, that some people will question whether or not my mom was Jewish, or question me because they’re not accustomed to seeing Chinese Jews — or not accustomed to seeing people who look like our family as part of the Jewish community. But that’s their limitation. That doesn’t actually mean anything about whether or not we actually belong. And I think that because they gave me those tools ahead of time, when I did encounter it, I didn’t question myself. While it could still be painful, it didn’t make me ask myself whether or not I actually belonged.

I think sometimes, as parents, we want to shield our kids, and we want to hope that some of these things don’t happen to them. Maybe there won’t be any bullies on the playground this time, or maybe there won’t be adults who will say inappropriate things to children. But I think because my parents gave me the tools ahead of time, I was shielded from questioning my own identity later on.

What are some positive ways that you’ve seen Jewish communities commit to inclusivity? And, because this is an imperfect process, what are some of the blunders?

I think it’s a mindset more than it is a program. Obviously, it’s helpful for some people to see Jews of different races, or that Jews have different abilities, or different configurations of families. I think you want to make sure that your leadership is diverse… I think there needs to be an openness to conversation and a willingness to hear when people are having difficulty. I think that it’s really, really hard as an institution, when somebody tells you that you’re not doing something that you pride yourself on, like being welcoming. But it certainly doesn’t help them, or us, if we are defensive about it. It’s only beneficial if we can be as open as possible to recognize what we’ve done wrong. And recognize that we’re going to continue to do things wrong, and that we’re just trying to kind of learn and grow.

One of the major blunders that I’m seeing is that this is new. I think that it’s not suddenly that we need to be welcoming of everybody — it’s that we are realizing that we need to recognize who our community is, and who our community has been. It’s not brand new, that suddenly we have racial diversity in our families. It’s not new that suddenly we have same-sex couples and families. It’s not new that we have people who are disabled. None of this is new. It’s just that suddenly people are thinking about it in a different way and talking about in a different way. So I think anything that says we have to “welcome diversity” is a mistake; I think what we’re doing is recognizing who we are as a Jewish community.

What do you love about being Jewish right now?

This is interesting — for me, I think it comes from the experience of being biracial. I think that Judaism is kind of in between a lot of different groups; I think we can see a lot of sides of many different kinds of arguments, based on the places that we’ve been in society and the experiences that we’ve had. I think, even now, the conversations around privilege resonate with a lot of Jews. And there’s a lot of Jews who have experiences around antisemitism. But that’s just one piece of the story, that says that we have insights in lots of different places, we can see things from lots of different perspectives. That’s what we get in the Talmud too, right? We always have the minority opinion reported. We always have the other side that somebody will take, so that we can make sure that we see things from all perspectives. I think that’s an important Jewish outlook. I think that has a lot of amazing possibilities for bringing people together, for building bridges, and for compromise.

How does rising anti-Asian violence, including the murders in Georgia, impact your Jewish leadership? How have you talked about it with Jewish community?

As a congregation, we’ve made connections with Asian American organizations. We’ve also reached out to Chinatown businesses and thought about how to be more supportive members of the greater San Francisco community. If we mark George Floyd’s death as a recognition of stark racial injustice, I think that was a kickstart of people trying to be more open, people trying to be aware, sensitive, and listen. This time has been unique: We have all been broken down in some way by the pandemic. While people want to think about racism, people want to be honest and vulnerable. One hope, in this time of both pandemic and racial reckoning, is that people have an opportunity to realize what is most important and how we’ve dismissed what’s going on in the world until now.