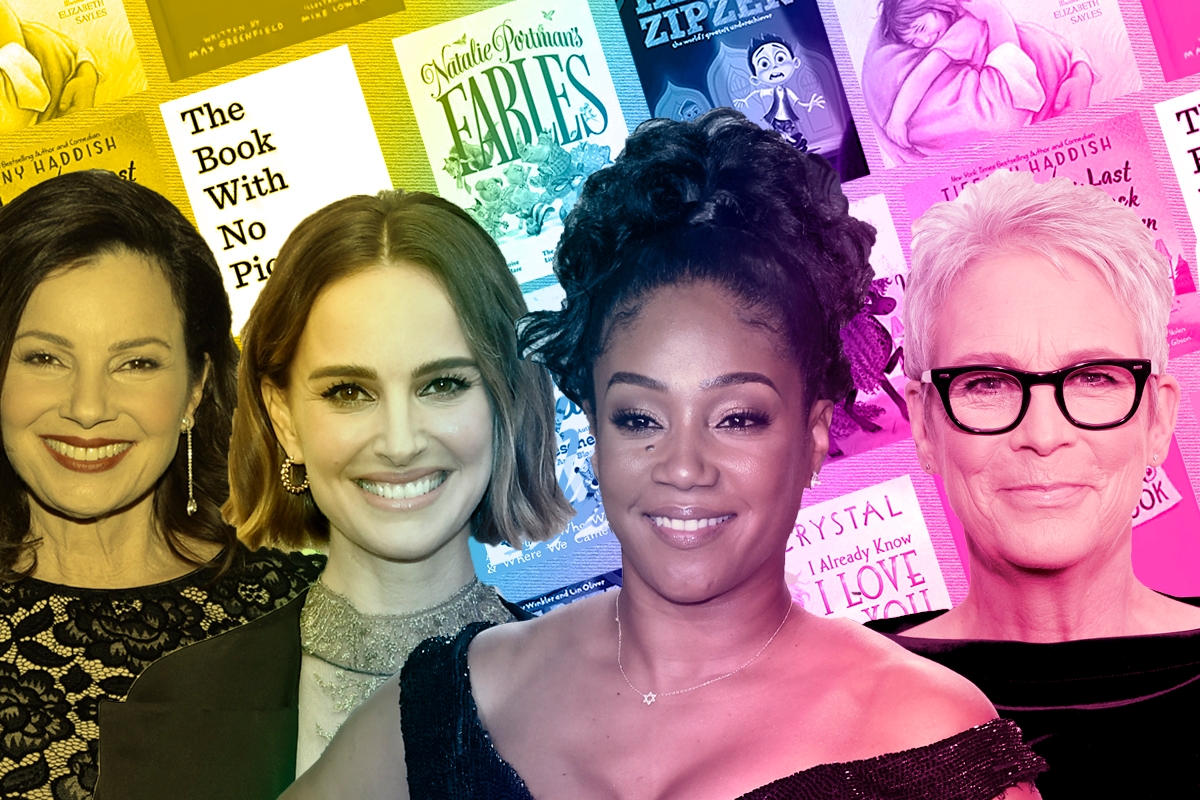 Here at Kveller, we are constantly in awe of the myriad talents of Jewish celebrities. Those we know as actors or comedians may also spend their time promoting social activism, taking up mah jongg and, of course, rearing their children. But a slew of famous Jewish actors have also written children’s books — many of them bestsellers! — and many of which reflect their childhood experiences or unique sense of humor.

From Jamie Lee Curtis to Henry Winkler, we rounded up 11 Jewish celebrities who have brought their heart, humor and creativity to the world of children’s book publishing. Whether you’re looking for laughs or you’re more in a “life lesson” mood, check out this list, below.

Actress Natalie Portman, who is working on a new very Jewish Apple TV+ show, is also the author of the New York Times bestselling book “Natalie Portman’s Fables.” The book, published in 2020, includes insightful retellings of classic fables like “The Three Little Pigs” and “The Tortoise and the Hare” — but updated and modernized for our current times. This sounds like a great book to add to the shelf!

Curtis is nothing if not busy: she’s starring in a new movie, “Halloween Kills;” she’s a philanthropist who restored her grandparents synagogue in Hungary (who also volunteers at the Children’s Hospital of Los Angeles) and she’s a kickass mom and godmother. But that’s not all: The Jewish actress has penned 10 children’s books, many of which have self-confidence themes like “I’m Gonna Like Me” (2013) and “This is Me”(2016). Can she just be our Jewish mom now?

You likely know Jewish comedian Jerry Seinfeld from his stand-up comedy or his eponymous sitcom — but don’t let’s forget that he wrote a children’s book as well! “Halloween,” Seinfeld’s 2002 picture book, is all about the young Jerry’s childhood quest to get the most candy on Oct. 31 as possible. Plus, its illustrations are something to see.

While you may know Amanda Peet as the creator of the hit Netflix miniseries “The Chair,” the Jewish mom and director also co-wrote a children’s book in 2015 about being Jewish on Christmas!

“My co-author Andrea Troyer and I were in Belfast looking for Hanukkah presents for our kids,” Peet told Kveller in 2015. Not an easy task. (We live in Belfast every summer while our husbands [David Benioff and D.B. Weiss] shoot “Game of Thrones” there.) We started talking about what Christmas is like for Jewish kids…how left out they feel. Originally, we wanted to write a book about how awesome Hanukkah is. That proved to be really difficult.” Instead, in this charming tale, the protagonist grapples with not celebrating Christmas but eventually embraces her Jewish identity.

Beloved “New Girl” actor and hilarious social media dad Max Greenfield is coming out with his first children’s book this November! “I Don’t Want to Read This Book” is a comedic picture book dedicated to all the kids who think they don’t like to read books. We think it’s gonna be a great one. While the book comes out Nov. 9, you can preorder the book here.

Along with her repertoire of funny films (and her high-profile marriage to Jewish actor Sacha Baron Cohen), Jewish actress Isla Fisher is also the author of the “Marge in Charge” (2018) series, about a babysitter with rainbow hair who breaks all the rules. She told Barnes and Noble that the series was actually inspired by the silly stories she would tell her kids — Olive, Elula and Montgomery — at bedtime.

Emmy-award winning Jewish actor and director Billy Crystal wrote a beautiful ode to grandfathers everywhere in “I Already Know I Love You” (2008). The picture book is all about a new grandpa awaiting his grandchild’s arrival, and it is so sweet — especially knowing that Crystal is a grandpa himself, and that he’d talk to his grandkids in voices of his characters, like Mike Wazowski from “Monsters Inc.” or Miracle Max from “Princess Bride.”

Jewish actor and comedian B.J. Novak is best known as Ryan from “The Office,” where he was also a writer and producer. But Novak is also the author of the irreverent [YEAR] NYT Bestseller “The Book With No Pictures” (2014). While it’s true the book is printed in black-and-white with no images, it is filled with silly words and songs and has become a modern classic for a reason. (Fun fact: Novak grew up in Newton, Mass., and went to high school with his future “Office” co-star John Krasinski!

Best known as the Fonz from “Happy Days,” iconic Jewish actor Henry Winkler — who also voices Zayde in the “Rugrats” reboot — wrote a children’s book series, Here’s Hank, about a boy with learning challenges, inspired by Winkler’s own struggles growing up with dyslexia. Hank Zipzer (2012), who is lovingly referred to as “the world’s greatest underachiever,” is the star of 14 books by Winkler — movingly, the actor told NPR that the book series is what he’s most proud of.

Drescher is not only “The Nanny” and an avid mah jongg player, she’s also the author of “Being Wendy” (2011). The picture book, another NYT bestseller, is all about young protagonist Wendy trying to find her “box,” or where she fits in the world. Naturally, just like Drescher, Wendy breaks out of her box and wows her peers.