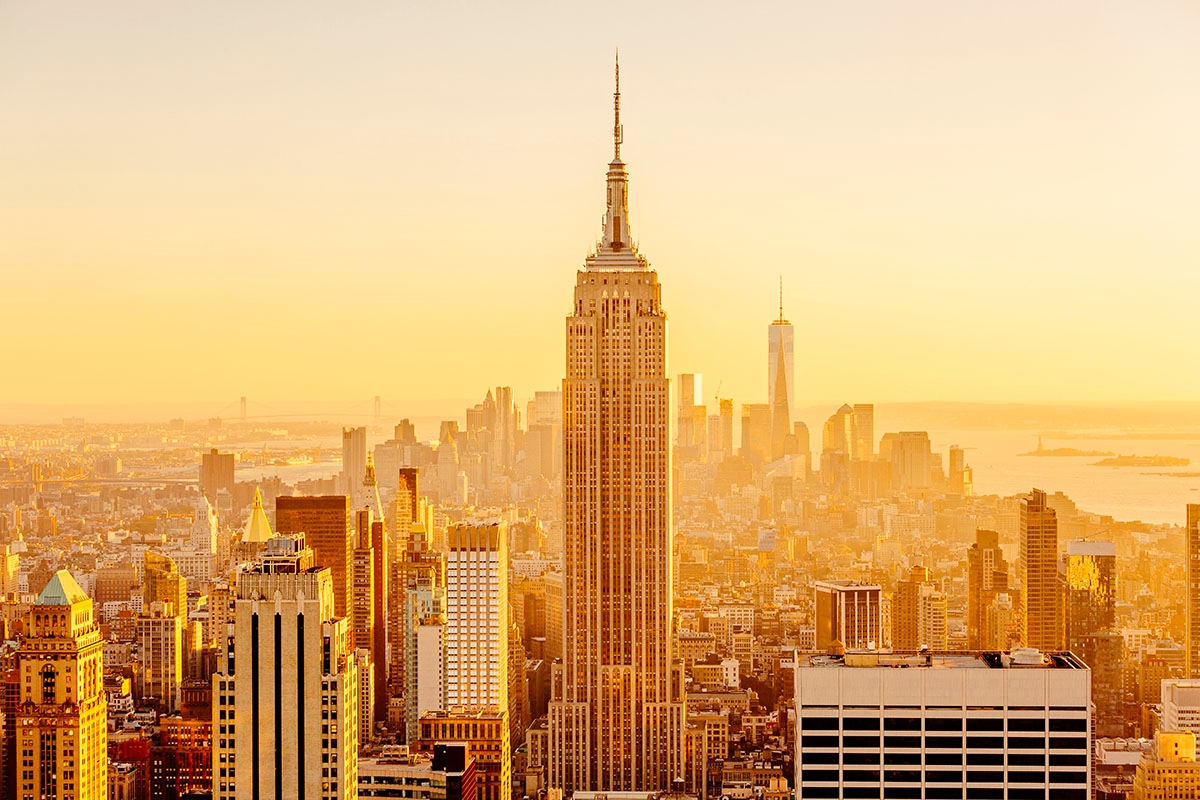 Start spreading the news: If you didn’t already know, New York — AKA the greatest city in the world — is chock full of Jewish history. For American Ashkenazi Jews, especially, there’s a good chance the city is where your ancestors first arrived in the U.S.

Beginning in the late 1800s, when many Jews were fleeing persecution in Eastern Europe, New York’s Lower East Side became a major hub of American Jewry — many vestiges of which remain today (shout out to Kossar’s Bialys!). As Jewish communities flourished across the city, Jewish individuals made their mark (and continue to do so!) in literally every aspect of city life, from politics to business to the arts, helping to make NYC vibrant cultural and financial capital that it is today.

Though New York City has changed and evolved over the decades, it remains one of the largest hubs of Jewish life in the world. Approximately 1.1 million Jews live in the five boroughs. In honor of the rich Jewish history of the Big Apple, we rounded up our favorite Jewish baby names that pay homage to the city we love.

1. Barbra — This name, which means “stranger or foreigner” in Hebrew, honors the one and only Jewish icon Barbra Streisand. The singer — who recently became the first artist to have a no. 1 album in each of the last six decades — was born and raised in Brooklyn. Her career began when she won a contest at a small Manhattan club, and, well, the rest is history!

2. Emma — Jewish writer Emma Lazarus is most famous today for her poem, “The New Colossus.” Though she was raised in a wealthy, Sephardic home, Lazarus was an activist who worked with poor Ashkenazi immigrants who fled antisemitism in Eastern Europe. Her beautiful words —  “Give me your tired, your poor, your huddled masses yearning to breathe free…” — can be found on the pedestal of the Statue of Liberty, transforming the iconic statue into a national symbol of inclusion and safety.

3. Francine — A French name that means “from France” or “free man,” this name honors “The Nanny” herself: Fran Drescher. Like her character on the classic New York sitcom, Drescher was born and raised in Flushing, Queens, and actually went to high school with Ray Romano at Hillcrest High School.

4. Grace — Grace, which has the same meaning as Hannah (“compassionate or gracious”), is the name of writer and National Book Award finalist Grace Paley. Born in 1922 in a Jewish family in the Bronx, Paley garnered acclaim for her New York-based “The Collected Stories of Grace Paley,” a collection of beautiful short stories encompassing love, parenting, women’s roles and war in a lyrical prose infused with Yiddishkeit.

5. Idina — This Jewish name, much like Adina, which means “delicate or gentle” in Hebrew, pays homage to actress Idina Menzel. Menzel was born in New York City and grew up in Long Island, and one of her most memorable roles is Maureen in “Rent” — a musical about living in New York City in the 1980s.

6. Ruth — A biblical name that means “friendship” in Hebrew, Ruth honors the one and only late Supreme Court Justice Ruth Bader Ginsburg. Before her law career advocating for women’s and civil rights, RBG was born and raised in Brooklyn. She attended James Madison High School and went on to excel in college at Cornell University in upstate New York. What better way to commemorate a world-changing icon than to choose Ruth as a baby name?

7. Sarah — Sarah commemorates the Jewish matriarch who was the wife of Abraham and the mother of Isaac. Flashing forward to today, Sarah is also the name of actress Sarah Jessica Parker, who grew up in Dobbs Ferry, NY and became famous for for the very NYC-centric “Sex and the City.” Another famous New Yorker named Sarah is Sarah Michelle Gellar, the Jewish star of “Buffy the Vampire Slayer,” who grew up in the Upper East Side of Manhattan.

8. Hester — A version of the Hebrew name Esther, this name commemorates a quintessential part of New York’s Lower East Side: Hester Street. Once the center of the densely populated Jewish neighborhood, in the late 1800s Hester Street was filled with up to 1,500 push carts and peddlers, selling all types of goods. You may also know the 1975 film, “Hester Street,” which is about Jewish immigrants struggling with assimilation on the Lower East Side in the late 1896.

9. Ellis — Ellis, a name with Welsh origins meaning “kind or benevolent,” commemorates the first landing place for many Jewish immigrants: Ellis Island. The island, located in New York Harbor at the mouth of the Hudson River, greeted millions of immigrants throughout its operation from 1892 to 1954. During this period, it is estimated that 3 million Jewish immigrants arrived in the U.S. through Ellis Island.

10. Sandy — Legendary left-handed Jewish pitcher Sandy Koufax grew up in Brooklyn and started his major league baseball career playing for the Brooklyn Dodgers. Winning numerous awards and setting a major league record for strikeouts in two games in 1959, Koufax is most famous in the Jewish community for refusing to play on Yom Kippur in the 1965 World Series. As the star pitcher of the Los Angeles Dodgers at the time, the Brooklyn native put his proud Jewishness on an international stage.

11. Abraham — Abraham, a name that honors the first biblical patriarch that means “father of many,” also commemorates writer and journalist Abraham Cahan. Cahan, who immigrated from Lithuania to the Lower East Side of Manhattan in 1882, founded the socialist Yiddish newspaper The Jewish Daily Forward — where he served as its editor-in-chief for more than 40 years. He also wrote fiction, including “Yekl: A Tale of the New York Ghetto,” which was adapted into the film “Hester Street.”

12. Adam — Adam means “earth” in Hebrew, and is also the name of Jewish actor Adam Sandler, who was born in Brooklyn. One of Sandler’s latest films — “Uncut Gems” — also takes place in the very Jewish Diamond District of Manhattan.

13. Barney — If you love New York delis, you have surely heard of Barney Greengrass, the Upper West Side Jewish deli known for its smoked fish “and not taking credit cards.” The deli was founded by Barney Greengrass himself in 1908 and has been feeding New York ever since. While the name Barney may not have Jewish significance in itself, the deli’s Jewish roots are meaningful to commemorate in a baby name.

14. Daveed — which is the phonetic spelling of the Hebrew pronunciation of David — commemorates the second King of Israel. Daveed Diggs is one of today’s greatest Broadway stars, gaining fame in his roles as Thomas Jefferson and Marquis de Lafayette in “Hamilton.” This Broadway hit not only takes place in New York City, and first garnered acclaim after premiering off-Broadway at the Public Theatre in 2015, but it also has plenty of Jewish influence. (Not to mention his Kveller acclaim as the artist behind the incredible Hanukkah bop “Puppy for Hanukkah”).

15. Eli — Eli, a Hebrew name that means “my God,” commemorates Eli Zabar, founder of the quintessential Jewish grocery and appetizing store Zabar’s. The family business was founded in 1934 on the Upper West Side, and has been known ever since for its coffee and smoked fish… and long lines.

16. Hal — Hal is a name, often short for Harold, which means “army ruler” in Scandinavian. Broadway legend Hal Prince — who produced Broadway musicals “Fiddler on The Roof” (1965), “West Side Story” (1958) and “Cabaret” (1966) — was born to a German Jewish family in Manhattan. Choosing the name Hal honors this very Jewish Broadway legacy.

17. Jerry — Another name that isn’t categorically Jewish, Jerry is the name of two Jewish actors that are quintessentially New York: Jerry Seinfeld and Jerry Stiller. Seinfeld, is of course famous for his sitcom by the same name, in which features NYC as its backdrop. In the show, the famous Jewish comedian Jerry Stiller plays George Costanza’s father, Frank. Both Stiller and Seinfeld were born in Brooklyn, and needless to say New York comedy would not be the same without either of these Jewish Jerrys.

18. Larry — Speaking of “Seinfeld,” the show would not be the same without the Jewish neuroses of the show’s creator, Larry David. David was born in Brooklyn and raised in Brooklyn, and he spent his young adulthood there as a bra wholesaler. His time in Brooklyn — where he once quit a job and went back again, and stole a tape from his girlfriend’s answering machine —  became fodder for George Costanza’s plot lines on “Seinfeld.”