Amy Schumer Did Standup Two Weeks After Giving Birth. So What?! – Kveller
Skip to Content Skip to Footer

Amy Schumer Did Standup Two Weeks After Giving Birth. So What?! 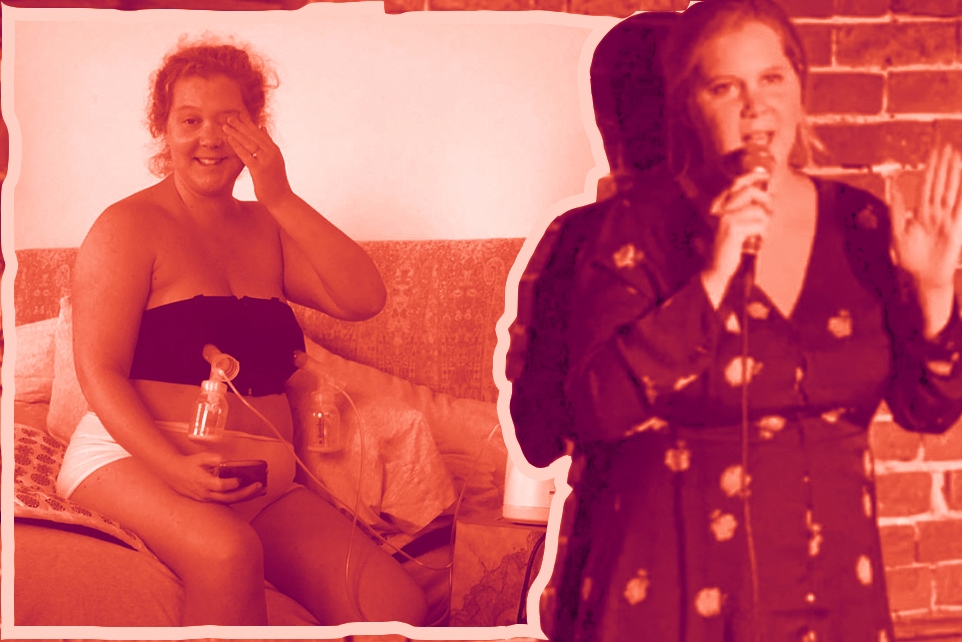 Amy Schumer gave birth to a darling baby boy, Gene Attell, on May 5 — just one day prior to the arrival of some other random, totally uninteresting baby named Archie.

(Kidding! Like everyone else with a pulse, we totally love Meghan Markle and are thrilled for her.)

But anyway, ever since she became a mom a few weeks ago, funnywoman Amy — who was totally our hero during her pregnancy — has been doing what she does best: posting heartfelt, unvarnished, and often hilarious pictures of new motherhood on her Instagram. Some of our favorites include this moving post, in which she pays tribute to all mothers and to her doula, Domino Kirke (yes, that’s Jemima Kirke‘s sister), or this funny image of her pumping with the hashtag #OOTD (that’s “outfit of the day,” for those of us who are not so fashion savvy.)

But one of these recent posts — an image of her performing standup at New York’s Comedy Cellar — recently drew the ire of Instagram mom shamers.

Apparently, some commenters were really upset that Amy dared to perform standup a mere two weeks after giving birth. I mean, wasn’t ruining Pink’s Instagram enough for these people?!

“Already???? That’s insane!!! And inhumane. Contract or not you need to be allowed at least 6 weeks for maternity,” read one comment.

Another chimed in with, “I’m sorry. What?! Didn’t you birth a human like 5 minutes ago?”

Now, don’t get us wrong, we at Kveller are definitely against any new mom going back to work before they’re ready to. We’re all about longer and paid parental leave. We find it shameful that the U.S. is one of the only countries that does not guarantee paid maternity leave. Parents deserve to rest and bond as much as they need with their newborns.

But you know what else? Parents should also be allowed to do what they need to do in order to ensure their own mental health and happiness. After all, a happy mama means a happy baby! And if taking a night off from mom duty is just what Amy needed  — then, hey, mama, you do you!

Plus, if we’re being totally real for a second: A mere eight days after giving birth, many of us Jewish moms find ourselves  standing in a room full of people, having to look and act somewhat normal, and watch our baby get circumcised. I honestly can’t imagine getting on stage to do what you love — and, you know, get paid to do — is any way more brutal than that.

And let’s not forget that Amy is a creative person. For many of us, the best way of processing this huge experience of giving birth is through our craft. For some people that’s writing or drawing, for Amy, it’s standup comedy.

Sure, a lot of us barely have the energy to shower at two weeks postpartum, but Amy endured a difficult, grueling pregnancy, in which she suffered from constant, extreme morning sickness known as hyperemesis gravidarum. She’s finally not throwing up all the time, and her body is her own at last (well, aside from the pumping and nursing, which, judging from her Instagram, she is doing a lot of). Maybe this is the best time to get on stage!

Whatever her reasons, it’s not for us to judge. Amy is a successful comic with a large support system, which includes, yes, her baby’s dad, who we’re sure would not be shamed for going out two weeks after his son was born. Let’s face it, most dads in this country get little to no paternal leave, and no one ever blinks an eye if they’re out there drinking a beer right after their wives had a baby. This double standard has got to go!

We’re glad to report that Amy is so not fazed by the haters (to be fair, there were many loving and supportive comments on her Instagram post, too). She posted a picture of her pumping (we see that Medella pump!) with the caption “Sending out love to the moms shaming me for doing standup last night!”

Pump on and rock on, Amy!