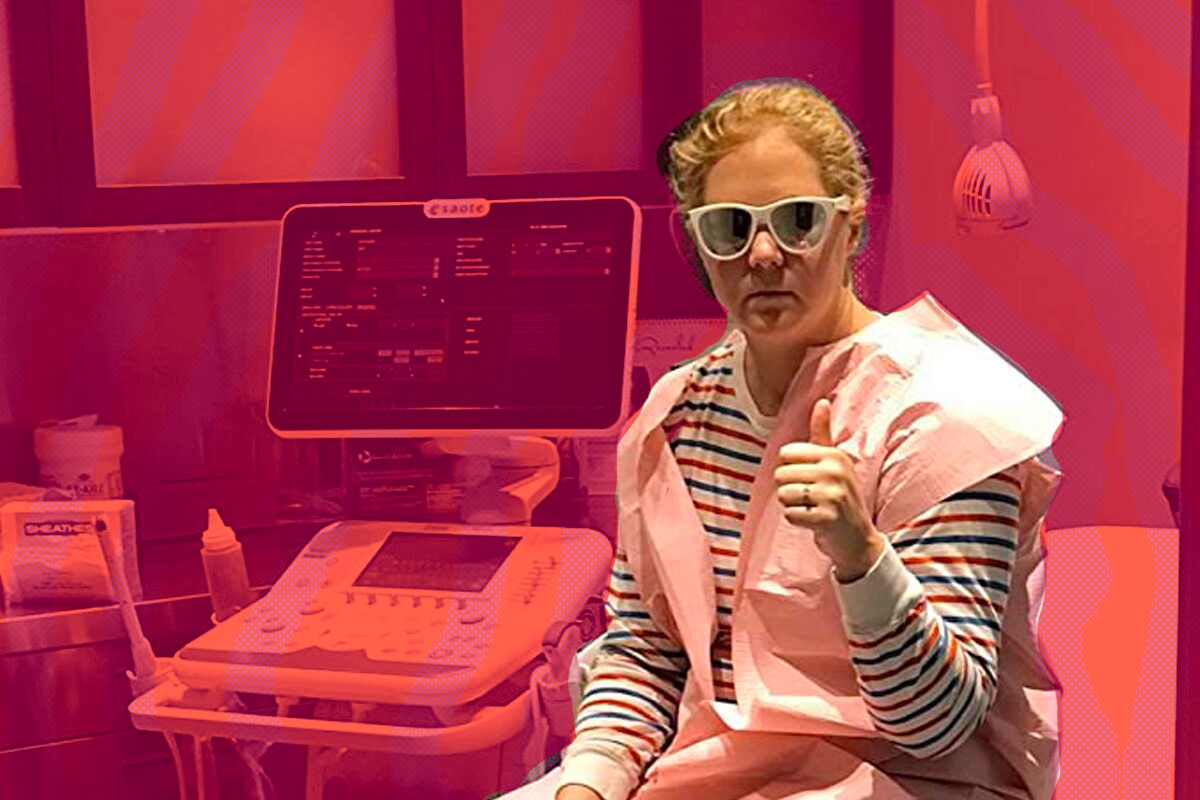 I hate movies where people puke. Throwing up has never been funny to me — I just loathe gross, movie projectile vomit. I’m squeamish and sensitive like that. I also hate movies in which pregnant women puke — almost daintily, and just one time, usually perfectly aimed at a toilet bowl — just you know, kind of instead of a pregnancy test? So that you can know they’re with child, and they can go on with their lives?

Yet, despite its approximately 5,498 puking scenes (I’m honestly not sure that’s an exaggeration), I loved Expecting Amy, the entrancing new three-part documentary on HBO Max about comedian Amy Schumer. The film starts with the revelation that she is pregnant, and ends with the birth of her son, Gene.

Directed and edited by Alexander Hammer, who edited Beyonce’s Homecoming, Expecting Amy was initially supposed to document the creation of Schumer’s Netflix special. But the film ended up being about so much more: It beautifully pieces together old footage from Schumer’s childhood; grainy iPhone shots of her struggles with hyperemesis gravidarum, a pregnancy condition which causes one to basically vomit nonstop; as well as snapshots of her comedy tour and scenes from her life. The result is a deeply meaningful and unique documentary about humanity and parenthood. In fact, it is one of the first times, if not the only time, I’ve seen an accurate on-screen portrayal of pregnancy in all its ugly, painful, life-altering glory.

I loved, and found I actually needed, every scene of Schumer inelegantly regurgitating. From her first time throwing up — five weeks pregnant, feeling awful and also kind of elated — to when she yells “help” from the bathroom floor, to when, weeks later, she’s still throwing up and is shakily on her way to the hospital instead of taping a comedy show. It was so visceral and real that it’s incredibly validating to anyone who is (or has recently been) pregnant.

I loved Schumer’s candor and her honesty, the way she acknowledges just how lucky she is. (“I just have all these resources that make me able to function,” she says in one scene, “and mostly no one has that.”) At the same time, we see just how incredibly hard things are for her — as the film reminds us, no matter how great your support system is or how rich or famous you may be, we all end up going through pregnancy in our own bodies, alone. And we all deserve some compassion as we undergo that experience.

Schumer’s uncensored, radical openness, is one of the reasons she’s been such a successful comedian. It’s also the reason why, sometimes, for squeamish people like me, her humor can be too much or miss the mark. But in Expecting Amy she brings that openness to something people are so often opaque and obtuse about: pregnancy.

Most people’s inability to be frank about pregnancy actively hurts pregnant people — and oftentimes, squeamishness about pregnancy and its assorted symptoms is rooted in misogyny. The truth is, pregnancy is not easy — and it can be complicated, dangerous, or unpleasant, and we just don’t prepare people well enough for it.

Lately — and especially during the pandemic — there have been a lot of arguments about what life is like for people with kids versus those who don’t. Some of these misunderstandings stem from the fact that childless people take offense when people with children say, “You don’t know what we’re going through right now.” But as a person who crossed that threshold not that long ago, I can say, it is simply a statement of fact: You do not know what it is like to have kids until you have them. It’s just something that your body, your heart, your mind, doesn’t know until it knows. Still, talking about the struggles of parenthood is important — because we so often idealize it as something incredible and amazing, which it certainly can be, but it’s also really complicated and hard AF.

Being and frank about pregnancy is just as vital, if not more so — because pregnancy has real health implications for the person who goes through it. That primal, physical price is one we should talk about. Expecting Amy may be a show about one woman, one condition — but it’s also about so much more than that. Because when we cloud the experience of pregnancy and sum it up with an “it’s all worth it,” we whitewash their pain. Yes, my pregnancy was amazing, but it also really, really sucked. I had morning sickness until the middle of my third trimester. I got diagnosed with gestational diabetes, which was torture. And through it all, I hated how woefully unprepared I was — and so many of my pregnant friends echoed that sentiment.

“I don’t resent being pregnant,” Schumer tells her producer in one seen. “I resent everyone who is not being honest.”

Honesty is paramount to Schumer, and it extends to other meaningful aspects of this candid series. It’s also wonderfully revealing about her relationship with her husband, Chris Fischer — and about the challenges and strains that all relationships face during pregnancy. If you’ve seen the couple’s lovely cooking show, you must know that these two are really in love, and they have an easy and natural rapport, but — especially during their pregnancy — they really had to work on it.

During the filming of Expecting Amy, Fischer was diagnosed to be on the autism spectrum. It was actually quite a thrilling revelation, as it helped them better understand themselves and each other.” I don’t think either of us want him to change,” Schumer says after the diagnosis. “But there’s some stuff that could make things easier for him.”

Judaism is casual and lovely in the show. “You’re gonna have a son, a Jewish son,” Fischer, who is not Jewish, is told after the couple announces the pregnancy to their closest relatives. We are also treated to footage from the couple’s wedding — we see Jewish actor Jake Gyllenhaal, a longtime friend of Fischer’s, joking that “Chris was the only uncircumcised among the four of us, which was a mystery for the three of us because we only knew the penis to be one way.” A lovely scene of old footage shows Schumer’s dad, Gordon, filming her on her bat mitzvah: “It’s bat mitzvah time, let’s see your bat mitzvah smile, Amy,” he tells her.

If, after reading all this, you’re under the impression that this special won’t be funny, let me disabuse you of that notion: Expecting Amy is also friggin’ hilarious. Humor comes out of Schumer as naturally as carbon dioxide, and all those who surround her, including her incredible sister, Kim. I cried a lot watching Expecting Amy, but I also laughed heartily.

The documentary ends with the indescribable, insurmountable elation she experiences after giving birth to Gene through an elective c-section, which I also loved as a c-section parent — I rarely get to see birth like mine shown on TV as moving.  After seeing everything that Schumer endured in her pregnancy — and then hearing her say, while holding Gene, that she would do it all over again — the profundity, the weight, the meaning of parenthood hit me completely.

Expecting Amy is a rare and gorgeous gift. It’s incredibly revealing without feeling voyeuristic, and it’s incredibly affirming for parents — as well as all of us who have parents or dream of being parents — without resorting to platitudes or idealizations. And I am profoundly grateful for it.