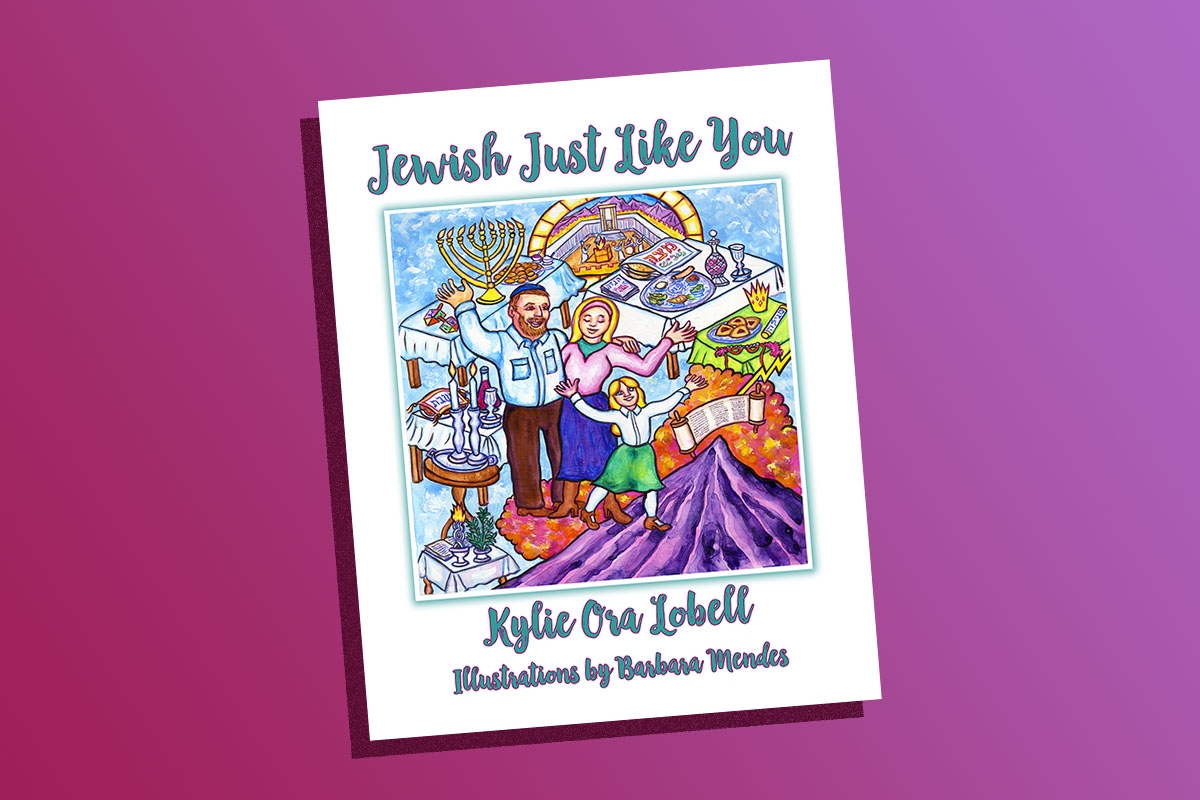 I was sitting in the children’s section of the library at American Jewish University, looking at all the books on the shelves. While I saw a bunch of books about the Jewish holidays and food and traditions, I didn’t see one book on conversion. How could it be?

So, I thought: This book needs to exist. And as a convert, I wanted to be the one to write it.

Though I wasn’t yet a parent, I wanted my future children to learn about my conversion story and how I met their father and my husband, Daniel Lobell. I wanted them to be proud of their roots and know that my parents and my husband’s parents loved them equally.

I wrote the book over the course of two years, starting in 2018. The format is essentially like a letter I’m reading to my daughter about how I met her father, why I decided to convert, and why she should be happy to be Jewish.

After I completed the first draft, I tweaked the rhymes with the help of Zach Sherwin, an amazing comedian and rapper who wrote “JAP Battle” from “Crazy Ex-Girlfriend.” Then, I asked my friend Barbara Mendes, an incredibly talented fine artist, to make the illustrations for the book. My sister-in-law, the awesome artist Jordana Lobell – who designs lovely ketubahs – drew borders for the pages. My brilliant friend Rae Shagalov of the “Holy Sparks” Jewish coloring book series laid the book out for me.

When the book was finished, I pitched it to all the Jewish publishers, but only one was interested. However, they wanted to change the illustrations. I would never do that. So I decided to self-publish instead. It was the best decision – with self-publishing, I could fulfill my vision for the book. I didn’t have to change a thing.

In “Jewish Just Like You,” I write about how I felt a warmth within me when I first went to a Friday night dinner at a local Chabad with Daniel. It was there that I ate delicious challah and drank kiddush wine and listened to a wonderful speech from the rabbi. I decided to convert after going a few more times and having Shabbat dinner with Daniel’s family.

My conversion process took five years. It took that long not just because conversion takes a while, but also because Daniel and I weren’t ready to get married. We got together when I was 21, and we both had some growing up to do. We took classes with different rabbis and slowly became observant, which meant celebrating Shabbat and the holidays and eating kosher food, among other things. Today, we call ourselves observant Jews.

When I came up with the idea for the book, Daniel and I knew we wanted to have children but we weren’t ready yet. And then, during the process of writing it, I got pregnant. I didn’t know if I was having a boy or a girl, though I suspected it was a boy. I got scared – would I have to change the entire book? It was certainly going to be awkward reading it to a little boy when I intended it to be for a little girl.

Thankfully, I must have known I was going to have a girl one day, because in October of 2019 I gave birth to our daughter, Tzofia Chana. I’ve read the book to her and while she mostly just stares at the colorful pictures and tries to eat them, I hope that one day she’ll understand and love the book and be proud to be a Jew.

“Jewish Just Like You” is especially important because unfortunately, sometimes there are stigmas around converting. For instance, lots of people have asked me, “So, you converted for your husband, right?” I tell them how no, actually, my husband didn’t want me to convert initially, and I brought him back to Judaism after he had been secular for a decade. One time, I dated a Jewish boy whose sister told him “Shiksas are just for fun.” A few Holocaust survivors questioned why I would want to convert to a religion where the people have been persecuted since the beginning of time. I told them, “I can’t help it. Judaism is in my heart. I have to.”

I imagine it may be confusing if we take our daughter home when my family is celebrating a non-Jewish holiday or eating non-kosher food while we get takeout from a kosher restaurant. In the book, I write, “You’ll see grandparents on both sides, their strong middot will give you pride,” and the picture shows my parents celebrating Valentine’s Day and Daniel’s celebrating Chanukah. My daughter will see that both sides of the family have different, but important, values and traditions. She should be proud to be a Jew but also have respect for other cultures at the same time.

Hopefully, my daughter and other children of converts will learn from this book how wonderful conversion is, and those who were born Jewish will understand us a little bit better. There are more converts among us than we know, and we have a lot to learn from them. As the Torah dictates, we should welcome them into our community with open arms just as if they were born Jewish.

That’s what I want to convey with the last line of my book. On the final page, I tell my daughter, “Mommy was not born a Jew, but now she’s Jewish just like you!”

You can purchase “Jewish Just Like You” on Amazon by clicking here.