How An ‘SNL’ Character Helped Me Embrace My Jewishness 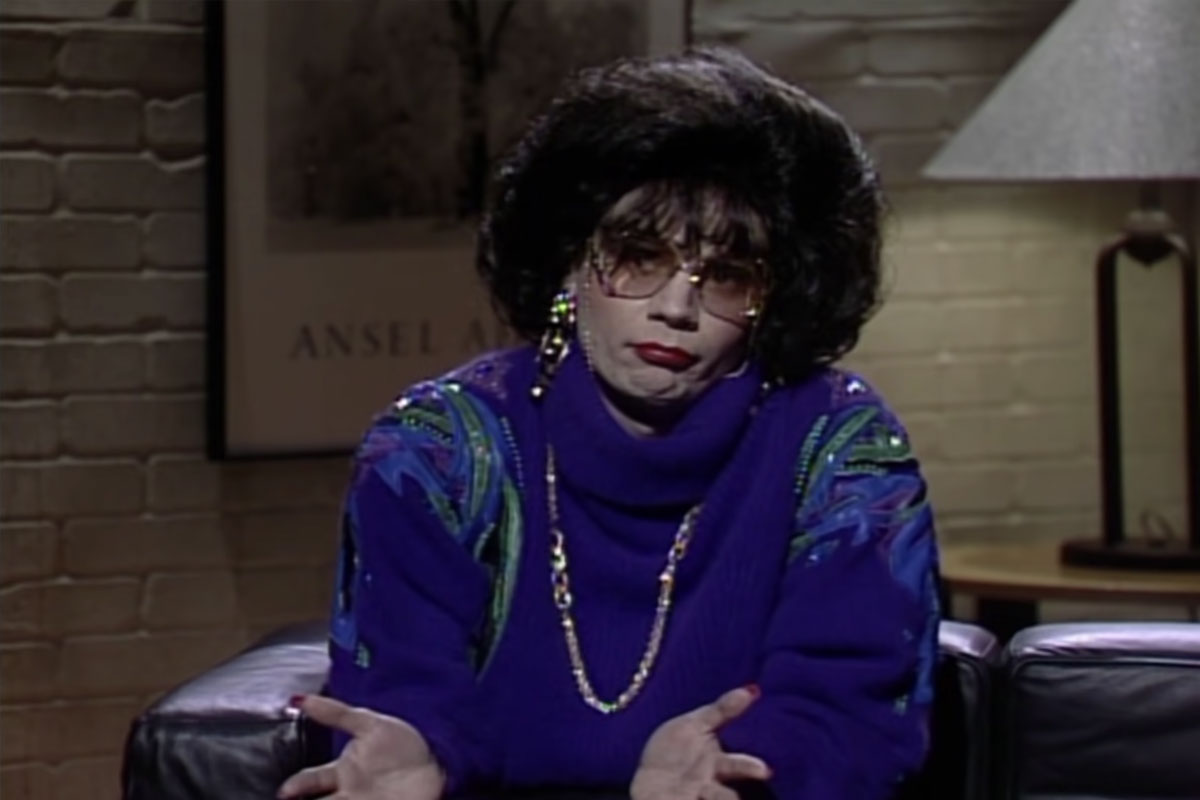 When I got to school on Halloween in 1993, not many kids in my 5th grade class recognized my costume. Amid the usual collection of witches, princesses and ghouls, there I was clad in an oversized, flashy, sequined sweater, a wig with a short haircut, and bright red press-on nails. Instead of trying to scare people or make myself look glamorous, I was the Barbra Streisand-loving, verklempt-getting, talk show host from a recurring “Saturday Night Live” sketch.

I was Linda Richman. Welcome to Coffee Talk.

Courtesy of the author

It’s no coincidence that after getting really into SNL I became obsessed with Linda Richman, a Jewish icon. Because it was around this time that my family and I were diving headfirst into Judaism.

Before my sister and I were even born, my Jewish dad and Presbyterian mom had decided to raise us in my dad’s religion. However, they got sort of sidetracked in the process. (I mean, I get it. Decorating Christmas trees is fun as hell, as is hunting for Easter eggs.) But when I was 9, my parents decided we would fully commit to being Jewish. Goodbye Santa, the Easter bunny and saying my religion was “half.” Shalom to being a full Jew who needed to prepare for her bat mitzvah. The Leitenbergs were finally joining a temple.

But because my parents chose a Conservative synagogue, we had a big, goyish problem: Our mother was not Jewish and therefore my sister and I were not considered part of the tribe. If we wanted to go to Hebrew school and get bat mitzvahed, we’d have to convert.

So into the mikvah we went. When my parents told me it was like a swimming pool, I assumed I’d get to wear my bathing suit. But I was wrong. Very, very wrong. “Look on the bright side,” my parents boasted. “When you come out, you’ll be Jewish!”

But when I got out of the mikvah and toweled off, I didn’t feel any more Jewish.

I also didn’t feel that much more Jewish going to Hebrew school two days a week and every other Sunday. Or when I took private Hebrew lessons to catch up with my classmates. Or when I joined Kadima, the youth group. Or even when attending tons and tons of seudahs and Shabbat services.

The truth was, I was way overwhelmed. It almost felt as if everything my family and I were doing was just part of going through the motions of being newly Jewish. There was no connection to what it meant to actually be part of the religion.

And that’s where Linda Richman came in. The character was played by the non-Jewish Mike Myers as a loving ode to his then mother-in-law, who was Jewish (and whose name was Linda Richman). He dressed as an over the top, older Jewish woman. Linda might have been a tad stereotypical but she was also warm, enthusiastic and incredibly funny. Her hysterical mannerisms and quirky eccentricities along with catchphrases like “no big whoop” and “like buttah” made her the absolute best in my book.

As a kid, I hadn’t seen that many Jewish characters portrayed in the movies and TV shows I consumed. This was before Fran Fine on “The Nanny” and Monica and Ross on “Friends.” None of my beloved members of “The Babysitters Club” were Jewish (I stopped reading before Abby was introduced in the series). And as much as I wanted Jessie Spano to be a member of the tribe, she sadly was not. Yet here was Linda Richman who was so outwardly Jewish, which just happened to be the thing currently taking over my young life.

When Halloween rolled around the next year, it was no question that I was going to go as Linda. My mom, always the cradler of my creativity, helped me make the perfect costume. And when I went to school that day, it was as if Linda Richman had become my new persona.

As one of the few kids in my class who was allowed to stay up until 11:30 to watch SNL, it was mostly only the teachers who knew who I was dressed as. But that didn’t deter me! I held a Coffee Talk–type show for my 5th grade class where I sat in the front of the room and one by one interviewed my schoolmates. They’d come up and I’d be all, “Hello, welcome to Coffee Talk, I’m your host Linda Richman. And what’s your costume, sweetie?” Then my fellow 10-year-old would respond with, “I’m a goblin!” and I’d say, “Oooh, we got a goblin here. Your costume, it’s frightening but it’s also like buttah! Ohhh I’m becoming verklempt. I’ll give you a topic that you can discuss. Goof Troop. It’s neither a goof nor a troop. Discuss!”

It might sound weird, but it was embodying Linda Richman that helped me start connecting to being Jewish. She made me understand that the religion wasn’t just about prayers and rules and learning a new alphabet. Judaism was a culture, too. Being so young, I hadn’t related to the straight forward Jewish stuff I was learning in Hebrew school. But Linda Richman was someone I got. And if being Jewish in some way could mean that you were an excitable woman who made hilarious jokes and had fabulous nails, then I was all in. Santa and the Easter Bunny might have officially been out of my life, but now there was a new larger-than-life figure I could forever revere.

And even today, almost 30 years later, I might not go to temple much, but I love being Jewish and all the cultural stuff that comes with it. No big whoop.