How My Jewish Kids Ended up Celebrating Christmas in July 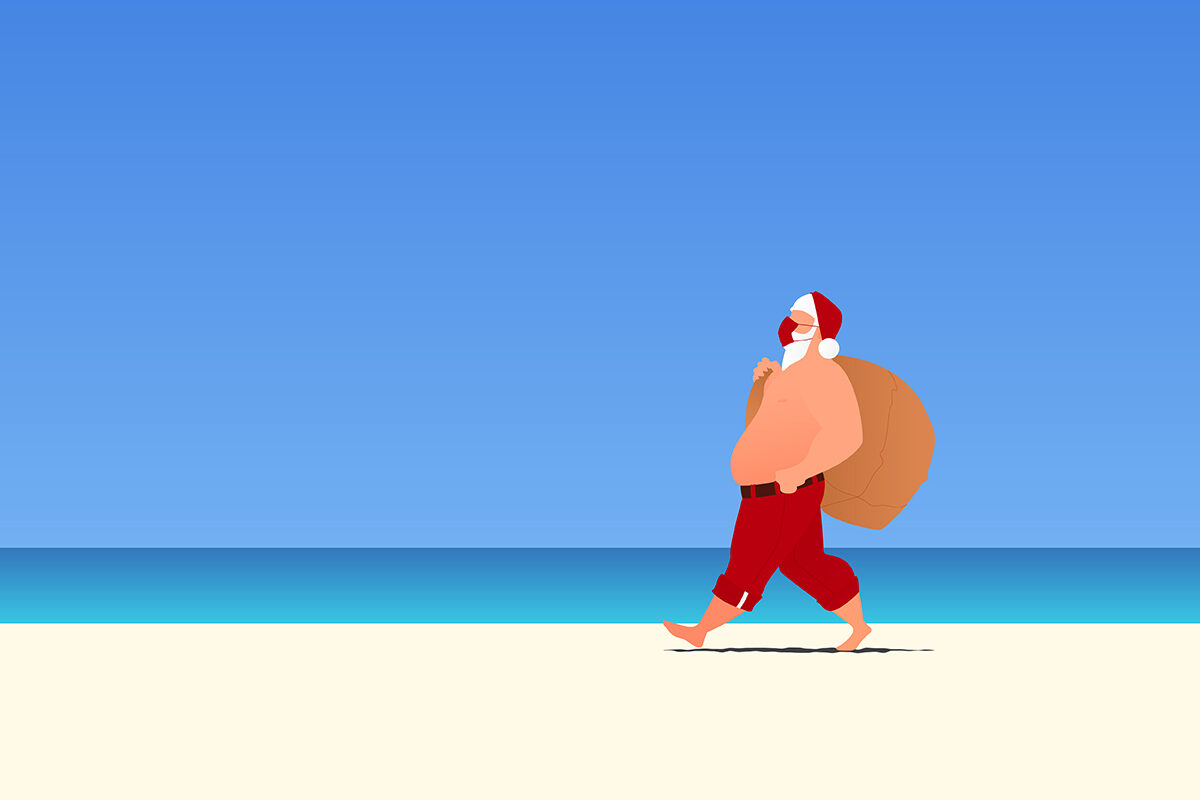 We didn’t think we also needed to worry about Santa.

The coronavirus has taken things from all of us. My family is among the lucky ones. None of us have gotten sick (pu pu pu). We have kept our jobs. My husband and I, both working from home and together all day every day, have yet to ask each other for a divorce.

But our twin daughters, who turned 4 in May on a quarantine birthday marked by balloons, homemade cupcakes, and a smattering of socially-distanced, drive-by greetings, have most certainly lost something. They’ve lost the blissful innocence that comes with not yet knowing, as Jews growing up in America, that they are Othered. That when December rolls around each year, that they are, and always will be, missing out.

As a working mother doing a pandemic, I found myself on July 1 wedged not so much between a rock and a hard place, but between more sinister things: I was wedged between the risk of contagion and the threat of full-on mental breakdown, both for myself, my husband, and my sweet daughters, who, after three months of quarantine, had given up using the living room couch as a trampoline and were now alternating between climbing the walls and throwing themselves face down onto the floor.

My girls’ Jewish preschool had closed three months earlier, and their Jewish summer camp, we realized, was simply not going to run this year. The weeks were bleeding into the weekends; the days into months and spring into summer. We were inching toward a breaking point and I could feel it.

For one twin, Anora, the tantrums were escalating. But it wasn’t so much her I was worried about. It was her sister, Leela, who is two minutes older but significantly quieter, more introverted, and more sensitive. Trapped all day within the same four walls as her assertive, verbally advanced sister, I could see her withdrawing into herself, like a turtle tucking into her shell. My whole heart ached. For some parents, I know, the decision would have been to suck it up and keep their kids at home. I understand that, but I am not that kind of parent. As concerned as I am for my children’s physical health, I also need to safeguard their mental well-being.

So I held my nose and (after assuring myself that masks, temperature checks, and hand-washing protocols were in place — don’t @me) I enrolled my kids in a nearby camp that was open. A secular camp. A camp where they serve turkey and cheese roll-ups for lunch, pork sausage and waffles for breakfast, and where they celebrate, Elohim help me, Christmas in July.

My daughters were born in Israel, where I lived for nearly a decade. When I found out I was pregnant, the question of Christmas, and all the longing and envy its cinnamon-scented cheer instills in most American Jews, wasn’t yet a concern. My husband and I are both the American-born children of Israeli parents, and as dual passport holders, we grew up speaking Hebrew and feeling as connected to Israel as we did to America.

We both made our way to Israel in our 20s, and when we met each other in Tel Aviv in 2011, it was this shared history of code-switching, of split loyalties and international longings, that instantly connected us. Our wedding was conducted in two languages, with the cash box and kabbalat panim expected by our Israeli guests and the rambling toasts and bridesmaids in matching dresses demanded by our American ones. When my husband and I decided, in 2018, to leave Israel and return to America with our daughters, I felt an immense sense of guilt: If it weren’t for Israel, they would likely have never been born.

My beautiful girls are IVF miracles, and they came to us after several grueling months of infertility treatments, which cost us nary a shekel. Fertility treatments are free in Israel to all citizens, and to get my daughters, I injected thousands of dollars of worth of hormones into my belly, endured multiple egg removals under full anesthetic, and underwent weekly blood draws, ultrasounds, and monitoring.

Had we already been living in California, where a single round of IVF runs around $15,000, our options would have been significantly more limited. Would my girls have been born if we hadn’t found ourselves in Tel Aviv when we began trying for a baby? I honestly don’t know.

But my girls were made in Israel, conceived not so much by me and my husband as by a team of benevolent physicians and lab technicians. They showed us kindness at every appointment. They exercised patience when I struggled for the Hebrew words for terms like “ovary” and “endometrium.” And they offered grace and generosity when, nearly two months before my due date, I arrived at the hospital with amniotic fluid streaming down my legs.

My Israeli-American daughters were pulled from my belly by a team of Hebrew-speaking surgeons and nursed for two harrowing weeks in the NICU at Ichilov Hospital in Tel Aviv. Their first language was Hebrew. At their first daycare, which they entered at 6 months old, they celebrated Sukkot and Simchat Torah, Passover and Purim.

When we decided to return to the U.S., our girls were 2 years old. We knew that our move meant we would someday need to discuss topics like intermarriage and the December dilemma. But we certainly didn’t expect it to happen in the heat of summer at the height of a pandemic.

But when their Jewish summer camp failed to open, the neighborhood preschool, which was accepting kids, seemed the next best option. We interviewed the staff about their hygiene and sanitization protocols. We consoled ourselves with thoughts of their vegetable garden and ample outdoor space. In our rush to reestablish a sense of normalcy to our days, we packed their backpacks, smeared sunscreen on their faces, and failed to consider the fact that we were not just putting our girls into a brand new camp at the height of a pandemic, we were also enrolling them in non-Jewish education for the first time in their tender lives.

Every day at their camp has a theme, and two weeks in, we learned, the theme on Friday of that week would be Christmas in July.

I swallowed a gulp. I stewed in guilt. This was it, I thought to myself: the first tipping domino in a series of events that would lead my kids to abandon their Israeli heritage. To forget 3,000 years of Jewish history. They were only on this earth because of the Jewish state and all it gave us. If they intermarried, or converted, I would be betraying the greatest gift Israel could have given me. It all started here, with Santa Claus and Christmas in July.

And then I took a breath, caught hold of my spiraling anxiety, and just asked my kids what they thought.

“We don’t celebrate Christmas,” Anora told me matter of factly.

But neither girl answered me. And then Leela piped up: “Can we wear our Hanukkah shirts and teach the class about dreidels?”

So last week, as the pandemic raged and my own guilt bubbled, my two Israeli-American daughters went off to camp wearing masks from Costco and “Dreidel Bot” shirts from Target. They told their new classmates about latkes, menorahs, and gelt.

The pandemic isn’t going away anytime soon. And for my kids, thank God, neither is their Jewish identity.