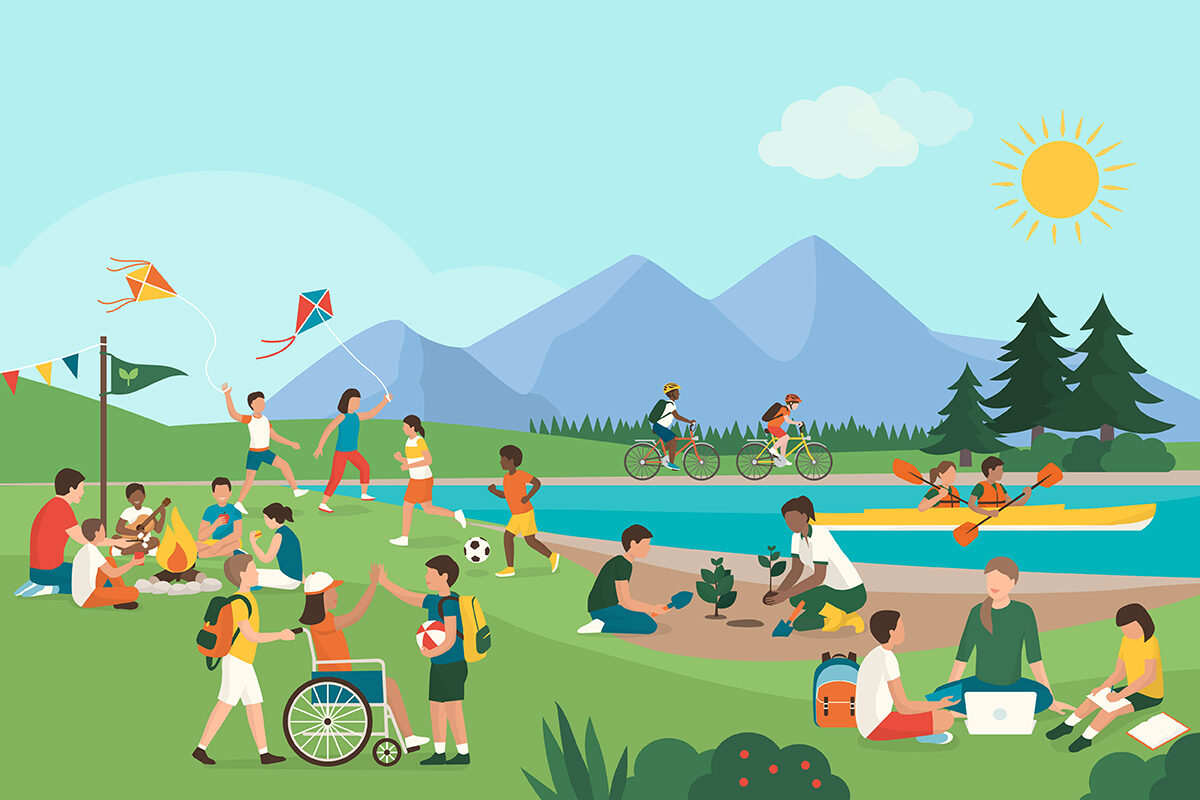 His name was Huda. Short for the Hebrew name Yehuda. And, like his name, his appearance in our lives was short as well. For a brief, two-week period, he was my son’s friend. My 3-year-old came home from camp everyday, always excited to talk about Huda.

Now, there’s no more camp, due to Covid-19 spreading among the campers and the counselors. Which means, while Huda is thankfully safe in his home, he’s also out of my son’s life.

All that’s left is temperature monitoring, backyard playing, fluid drinking, and a whole lot of worrying and praying.

In mid-June, my husband, my 5-year-old daughter, my 3-year-old son and I moved from Cleveland to Dallas. My job as a professor of public administration at the University of Texas – Arlington brought us to the area. When I signed my job offer in February, the “beforetimes,” we hadn’t planned to move until August. All of that changed when the novel coronavirus began to ravage the country. As we watched the trends, we believed what everyone else seemed to think was true: density mattered. Areas that were less densely populated were likely to have fewer cases. So, we revised our plans and decided it would be safer to get to Texas as soon as possible.

We moved into our new home in a suburban Jewish neighborhood, as we wanted to live in a place bound by an eruv. We also signed our kids up for the day camp at Chabad of Plano, one that we felt was committed to a high level of safety and precautionary measures. We were also hoping we could find some sort of community there, ourselves Lubavitch and familiar with the style of Chabad. Without being able to attend a synagogue service with my family, camp seemed like a way to find some element of normal Jewish life.

But then something surprising happened: Shortly after our travel arrangements were confirmed, cases in and around Dallas started rising. And then they started skyrocketing.

We anxiously and constantly checked the numbers in our county and the neighboring ones. As we were coming from out of state, we self-isolated for about two weeks after we arrived. We monitored ourselves after the three-day drive and looked forward to sending two healthy children to camp. We needed it to work out. After all, my husband and I both have mentally demanding jobs, we would be coming off a big move, our kids needed to get out, make friends, and start to get to know their new space.

On Sunday, June 28, the day before camp began, the administrators walked us through the day via Zoom. We had read the precautions and finally got to see them in action. We watched them simulate the morning drop-off procedures: parents would not be entering the building, kids would have their temperatures taken, masks would be worn, age groups would be kept separate, materials and other items would be kept separate as well. Everything was in line with the precautions set up for camps, the same ones that schools have discussed as well. We felt confident that things would be OK. Of course, we had doubts. But we made the choice.

Finally, the first day of camp arrived. After three and a half months at home — only rarely seeing our neighbors and waving from across the street — our kids wanted to be back out again. We wanted them out of the house. And with a new Jewish community to meet, we hoped they’d get to find new people and learn new things.

A week in, everything seemed to be working. Safety precautions were being followed, our children never even saw each other during the day, and the pictures from the counselors showed pretty much what we had expected. And my kids loved it. They were ready for camp everyday, 90 minutes before the building even opened. They finally had friends — Hudas everywhere.

Then July 4th weekend came. We saw people around us breaking social distancing guidelines. From across the street, we spoke to our neighbors, who mentioned the meals they had with loved ones and their children’s plans to gather in large groups. We wondered whether or not to send our kids back to camp, but we rationalized it to ourselves: In order to do our jobs, we needed the kids to be out of the house. Plus, the camp was geared towards Jewish children, many of whom might have been out less because July 4th was on a Shabbat. We took another risk and sent them for a second week.

The night before the third week of camp, however, was a rude awakening. This past Sunday, July 12th, an email from the camp administrators told us that a child in my daughter’s age group had tested positive for Covid-19. The child had been sent home from camp on the previous Thursday with a fever but did not have a fever the following morning. The test results were clear, however, and the camp told parents that children in that age group could not return the following day. Siblings in other groups were still given the green light to attend, as their groups were kept separate throughout the day. We were told that the camp would work with the Texas Department of Health to determine how to best proceed.

That was the first strike.

My daughter stayed home that day but my son went back to his group. He’s 3, and far more social than my daughter, so we felt like it was worthwhile to send him. But by the end of the day, on Monday evening, we learned that the counselors had been tested and additional concerns appeared as well. Because the counselors of the groups ages 4 and above were in constant contact with each other, the camp would be closing for all older kids.

That was the second strike.

The camp noted that the counselors for the younger ages hadn’t been exposed to those older counselors and that kids in my son’s group could still go to camp. We sent him one more day, hoping things would clear up. But, on that day — Tuesday — we found out that a child in the 3-year old group had tested positive as well.

That was strike three. We were out — and the remainder of camp was immediately cancelled. The administrators did exactly what needed to be done. I applaud them for being transparent and putting our children’s health and safety before all else.

But even before I could comprehend what this would mean for my work or unpacking plans, I felt sick to my stomach. My children had been exposed. Both of them. And we’d been exposed to them, of course. We could all become sick; we could all be in danger. I feel confused, guilty, unsure of whether we made a mistake. Was any of this really worth it? Did I need them out of the house that badly? Hadn’t I already managed for months with them around? Why didn’t I listen to my gut when I saw people who weren’t social distancing on July 4th? Why did I think that we could somehow escape this with masks and regulations?

Camp has been closed for a few days now and these thoughts haven’t left my mind. Not for a second. I can focus on little else — will my kids get sick? Are they safe? Are my husband and I safe? What do we really know about this virus and its long-term impacts? How could this affect every aspect of our lives, from our careers, to our ability to pay for treatment, to our child care duties?

Right now, we’re monitoring our kids, and ourselves, and just asking every question imaginable. We can no longer think clearly about a back-to-school plan. After all, our camp could barely keep this virus at bay for two weeks, with kids mostly outdoors and in a large building. What damage could coronavirus do in a classroom setting? What about when flu season sets in? My existing concerns about the school year have been exacerbated. We’re living this nightmare now and we don’t want ourselves, or anyone else, to live it again.

It’s hard to describe how painful this is. And honestly, it feels embarrassing on some level — should we have known that any group of children gathered for any period of time would likely lead to this? I didn’t want people to know right away. Even though I think it is dangerous to attempt to hide the realities of the pandemic, it’s hard to think that I might have made the wrong decision. And I’m deeply worried that we are all just a month and a half away from making this wrong decision again.

Editors’ Note: These are unprecedented times and the situation is changing rapidly. When making decisions for your family, we urge you to follow the guidance of the CDC and your state’s health department.