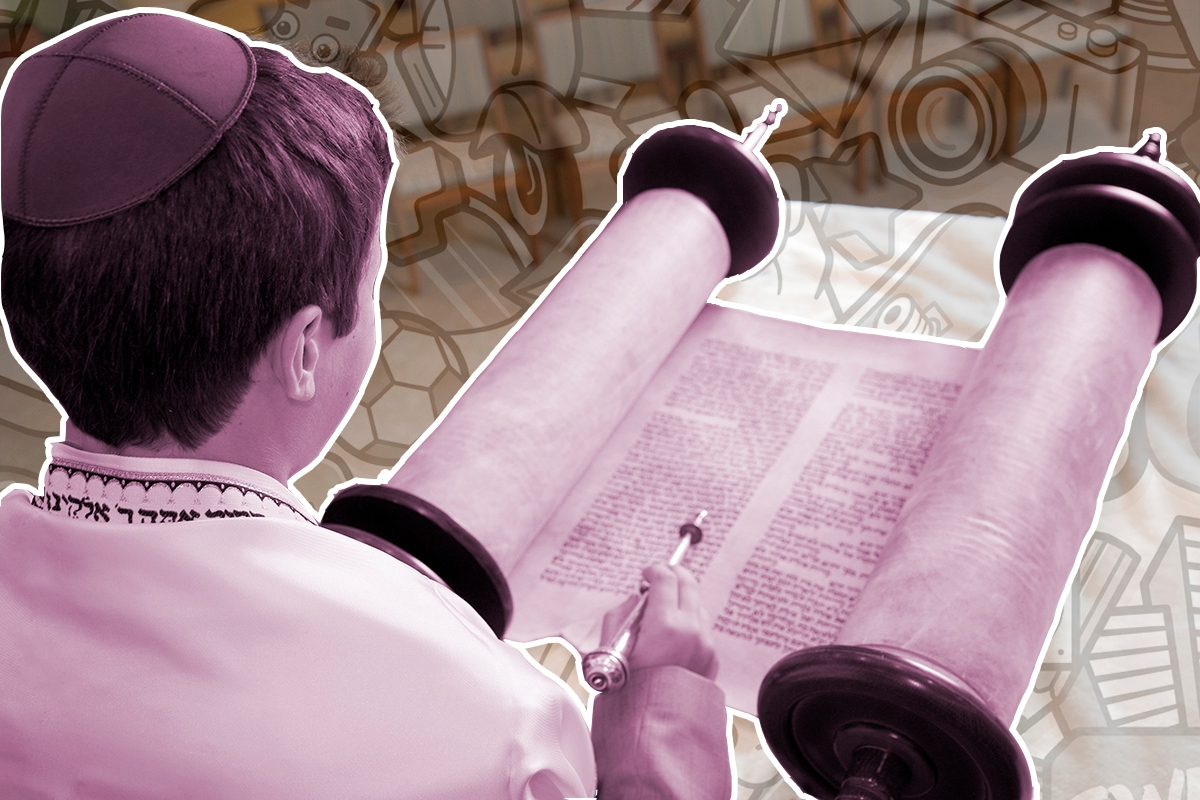 In September, our son became a bar mitzvah under an expansive, cloudy sky, in the very spot where we build our family sukkah every fall. His voice was steady and clear as he led the weekday morning service, at one point accompanied by the raucous chorus of birds seemingly intent on joining him in song. This simple but breathtaking service took place in the presence of 15 loved ones — with no one Zooming or Face Timing from afar.

It was a beautiful day, but it was not the large bar mitzvah celebration we had originally anticipated. Once the pandemic made it clear we’d have to pivot to a (nonexistent) Plan B, with our son’s input we moved his service to his Hebrew birthday and relocated it to our backyard, sensing that the convergence of birthday, home, and outdoors would make the day even more meaningful to him.

Our son was adamantly against having a “Zoom mitzvah,” which had become standard practice once the pandemic began. As he told us, “I don’t want guests attending my bar mitzvah with their cameras off. In their pajamas.”

As a children’s screen time advocate, I had my doubts about Zoom, too, albeit for very different reasons. While I knew there was much to gain with a Zoom bar mitzvah — including enabling friends and family around the world to safely join us — it had me thinking very carefully about what we’d be relinquishing. In convening a virtual (and, yes, possibly pajama-clad) congregation of loved ones, I was concerned that our focus would be oriented toward our Zoom participants, and not on our son or the davening. Would we find ourselves designing the service around our virtual audience, to keep it entertaining for them? Would we have to fiddle with the camera each time our son shifted position, or force him to stand stiffly in place within the camera’s frame? Would we be mindfully present, or distracted by worries about the strength of our WiFi?

As I suspected, the decision not to Zoom turned out to be extremely liberating. With a small minyan composed predominantly of family members, the service was humble, grounded, and spontaneous. Our son was free to move about our makeshift bima wherever his heart desired. He led the service on his own terms, and we all had the space to focus and feel awe in the moment. Most of all, our son’s bar mitzvah found a magical sweet spot: It was no longer about how much and how perfect — the longtime hallmarks of modern American bar and bat mitzvah services. Instead, it was a meaningful service that celebrated ends and beginnings, as well as growth, love, and Jewish learning.

The problem, of course, is that it renders performance at the service as a metric of Jewish worth. The muddled message our tweens may subconsciously absorb is that the more they do at their service, and the fewer mistakes they make, the “better” they are as Jews. They may wrongly conclude that Judaism values what and how they do at their b’nai mitzvah services more than it values who they are and who they are becoming. If they see their “big day” as their one and only public evaluation as Jews, what happens if they believe, deep down, that they just don’t measure up?

Moreover, by emphasizing the primacy of the service over all else, the year (or more) of b’nai mitzvah preparation can also be justifiably misunderstood by tweens as the lead up to a standalone, one-time event — rather than as skills development for a lifetime of Jewish growth and learning. In this performance-based framework, once the service is over, they may justifiably reason, their Jewish studies are over as well.

With the pandemic forcing a break from large, in-person celebrations, we have been handed an unprecedented opportunity for a b’nai mitzvah reboot. This is our chance to return the service to its humble position as one in a series of religious moments in a child’s march toward Jewish adulthood. I’d love to see our Jewish leaders work with tweens to develop a personalized, child-directed course of discovery and learning more clearly connected to post-b’nai mitzvah life. Viewed in this fashion, tweens could use the year once spent learning to chant Torah and Haftarah (skills that many kids struggle with and quickly discard after their big days are over) to focus instead on preparing for a lifetime of Jewish engagement.

This could mean learning to read, analyze, and comprehend a few Hebrew prayers so that they take on deeper meaning. Or maybe it’s grappling with existential questions through a Jewish lens, or taking a deep dive into Torah learning by studying the parsha of their birthday. They could explore Jewish themes through creative expression or activism. Of course, a tween could still choose to learn to chant, if that’s where their heart takes them (it suited me perfectly back when I was preparing for my bat mitzvah, combining my dual loves of the Torah text and music).

In this same spirit, we could also redesign mitzvah projects. If they are no longer artificially tied to the service, they can instead be oriented within the larger framework of long-term commitment to volunteering and Jewish causes, tapping into the child’s personal passions rather than focusing on the audience “wow” factor.

With such shifts in perspective and expectations, we free our b’nai mitzvah services to be what they should be: a thrilling moment of earned adulthood, and an honor and joy for the child to finally have the right to bless the Torah for the very first time. The service could take place on Shabbat mornings, but it needn’t be. It would be wonderful to see more families opting for smaller weekday or Shabbat afternoon services (with any party open to a larger guest list, of course, should the family wish). The child could choose to share their learning so far, whether that’s leading the service, reading from the Torah, or explaining their artwork or activism through a d’var Torah or discussion. And this sharing would be optional, not mandatory, because our joy will be tied to gratitude for the child reaching this moment — and not to the child’s performance at this moment.

Reimagining b’nai mitzvah services in this manner confers on our youth one added gift. In their world of TikTok, Instagram, YouTube — to say nothing of high-pressure school admissions and competitive sports — our kids spend their lives endlessly on public display, under scrutiny, and in performance. Just maybe, we can allow this one moment in their lives to be their uniquely Jewish reprieve from the incessant pressure to be observed, measured and compared.

My hope is that we can turn b’nai mitzvah celebrations into springboards — not conclusions — followed by ongoing community support to allow our youth to grow and thrive as Jews in ways that are meaningful to them, long after their celebrations are over. If we don’t, I worry that our current approach to b’nai mitzvahs actually alienates many kids from the kinds of lifetime engagement with Judaism that we all really want to see.

Over a year ago, when I began crafting the speech I had expected to deliver to our son at his bar mitzvah party, I had planned to contrast our large celebration with my father’s spartan one many years earlier.

My grandparents invited only a few relatives and one family friend, a rabbi, to attend. My father was called to the Torah and recited the blessings. That was it. Blink and one might have missed it. His parents brought schnapps and a nosh to share with the small assembled weekday minyan. When the service concluded, my father’s stern but loving grandmother didn’t comment on how perfectly he recited the prayers. As he remembers it, all she said was, “Now, when they call you for minyan, you go.” She instinctively knew that his becoming a bar mitzvah was really about what he plans to do going forward, not what he did that day.

In the end, it seems the pandemic brought our family’s bar mitzvah experience full circle. Our son will tell you that his intimate pandemic bar mitzvah experience was perfect, far surpassing the alternative that awaited him had 2020 been a typical year. Personally, I think of him as one of the fortunate Jews who will always remember becoming a bar mitzvah on his own terms, at a service blessedly freed of the heavy burden of unrealistic expectations.