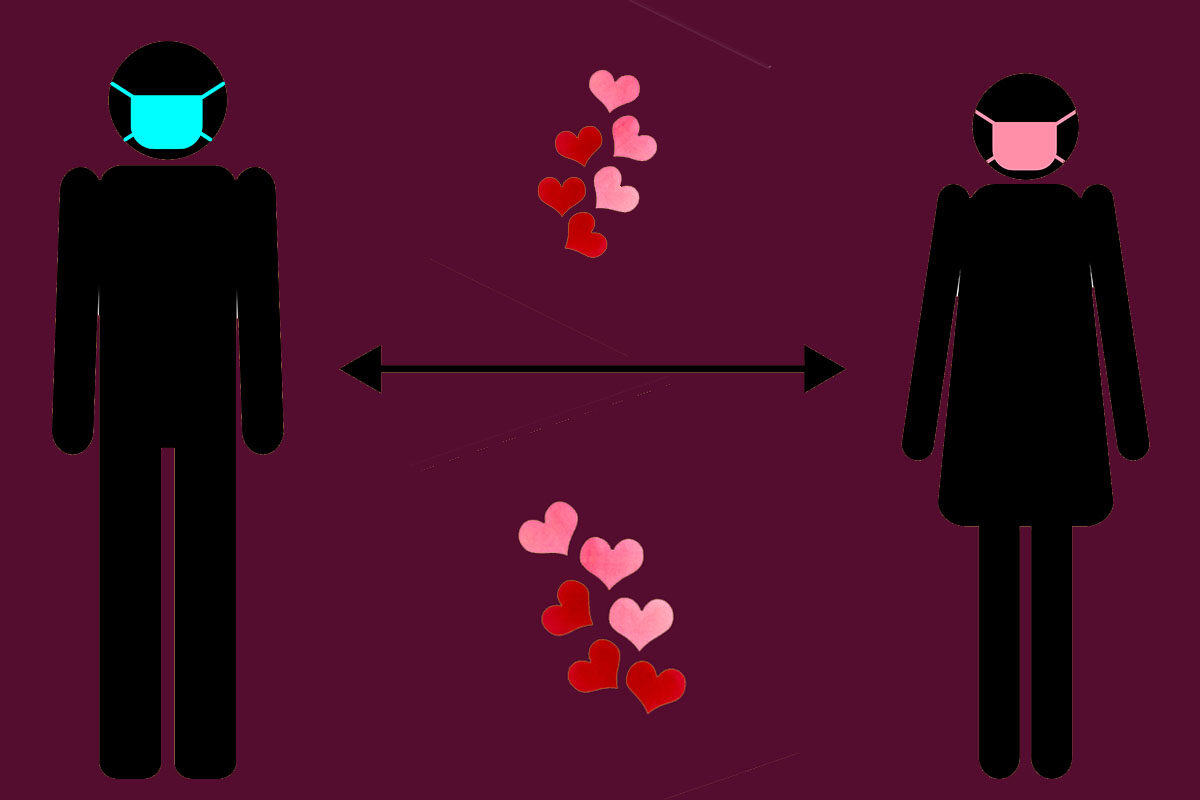 I had just finished putting my 1-year-old daughter down for the night. My 3-year-old son was curled up in my mother’s lap in the living room, listening to her read yet another truck book.

My date was in 25 minutes, and I needed to hurry. I peeled off my work-from-home leggings and shimmied into a tight pleather skirt. Over the bra I had managed to avoid wearing for the past month, I buttoned up a colorful silk shirt. I applied some makeup, even more ineptly than usual thanks to a recent overreliance on Zoom’s “Touch up my appearance” filter. Then, I grabbed my keys, blew a kiss to my son and mother, and hopped into the minivan.

Before backing out of the driveway, I put my date’s address into Google Maps. It was only a few minutes away but I had never been there before. I was giddy with anticipation, both to finally see his apartment and to be getting out of the house on a date for the first time in weeks.

I pulled into a narrow, suburban street and parked behind one of the many cars languishing on the curb with nowhere to go. Stepping out of the van and adjusting my skirt, I felt suddenly self-conscious in my bright going-out outfit that clashed openly with the national mood. It was mid-April, and California was deep in coronavirus hibernation. I wondered if people were peering out of their windows at me, asking themselves what this stranger who was clearly not sheltering in place was doing in their neighborhood.

I locked my van behind me, and it chirped back encouragingly at me as I made my way down the sidewalk, eagerly scanning the houses for the right number. When I arrived at his front doorstep, my date welcomed me in and showed me around. In his tidy and sparsely furnished living room, he had a pandemic-approved dinner date set-up: two small tables positioned six feet apart. Mine was the small bistro table in the corner, adorned with a bouquet of flowers and several small candles. His was the folding TV table. He was wearing a mask, but it wasn’t hard to tell that he was smiling. I felt an overwhelming urge to kiss him but knew I had to restrain myself.

Single mom navigating a new relationship during a pandemic? Not quite. This is how my husband and I celebrated our eighth wedding anniversary.

My husband, Grant, is a hospitalist, an internal medicine physician who works exclusively in the hospital. On February 27, just minutes before we were headed to the airport for a short getaway ski weekend in Utah sans children, Grant received a phone call from a coworker informing him that one of the patients at his hospital in Mountain View, Calif., had tested positive for coronavirus. It was the second confirmed community-spread case of Covid-19 in the country, and panic was in the air.

We canceled our trip so that Grant, who is one of the leaders of his team, could cover for a colleague who had been exposed. Anticipating school closures and longer hours in the hospital for my husband in the weeks to come, we asked my 64-year-old mother to leave my father by himself in New York City and fly out to California to help take care of the children. With an essential worker husband and no outside help, I didn’t know how I could care for my two toddlers while working full-time in the educational technology industry (one of the few industries that was actually booming at the height of the pandemic).

My mom is a force of nature — indefatigable, resourceful, inventive. She’s the kind of cook who can whip up a meal with whatever wilting vegetables have been cowering in your refrigerator drawer for the past few months, and the kind of grandmother who can construct an elaborate castle for your son out of discarded Amazon boxes. In short, she’s exactly the kind of person you want around in a crisis. Still, we worried about putting her at risk, given her age. We figured it was only a matter of time before my husband would be exposed to the virus through his patients at work. So, he moved into an Airbnb a few miles away, and only came home for a few hours in the evening, wearing a surgical mask and keeping his distance.

We devised elaborate new visitation regulations, based on the incomplete, constantly shifting information we had about the virus. Grant would come visit us after work, but only after showering first at his apartment. He would touch the children, but refrain from kissing them (not an easy feat, especially given the prime plumpness of our daughter’s cheeks). He would eat dinner with us, but only out of special utensils that were stored in a makeshift biocontainment unit on the far end of the sideboard. He never showered or used the bathroom at our house. We oscillated between worrying that we were not doing enough and feeling utterly ridiculous.

This new normal wasn’t easy on any of us. My husband became a visitor at his own home, unable to ever let his guard down. The children, already disorientated by their disrupted routines, were further confused by their father’s mask and physical distance. To our dismay, our son absorbed much more of the ambient conversation than we realized. One night before bed, he asked me to tell him a story “about a fox who died from the coronavirus.” Another evening, he told Grant not to touch him, because he didn’t want to “get the coronavirus.” When my husband tried to reassure him that he wasn’t sick, our son countered with some sound logic: “Then why are you wearing a mask?”

Worst of all, though, was the strain Grant’s mask placed on our otherwise healthy marriage. Ever since my hearing started to deteriorate as a teenager, I have relied on visual cues like lip reading to follow a conversation. Widespread mask usage, though undoubtedly a wise public health move, is my own personal nightmare. In the rare moments when we could be together in the same house, we struggled to stay connected emotionally. Grant’s frustration at having to constantly repeat himself was matched only by my own irritation at his futile attempts to communicate with me. And, on top of it all, we lacked access to the healing powers of physical touch.

On the other hand, it never got quite as hard as we’d expected, either. The surge we had braced for at his hospital never arrived; in the end, he only had a handful of Covid-19 patients to care for, always with sufficient protective equipment. My children eventually adjusted to their new playdate-less, playground-less life at home. I adjusted to an empty bed. We both knew how lucky we were to have stable jobs, my mother’s help, a backyard…

Still, we were aching for some time alone together, some special way to celebrate our anniversary after all the stress, anxiety, and unusualness of the last few weeks. Our options were obviously limited. They boiled down to two: dinner in the dining room of our cramped house, whenever my son deigned to fall asleep for the night and with my mother hovering nearby — a weird cross between parenthood and adolescence — or dinner at Grant’s coronavirus-infested den. We debated the risks and ultimately decided that my husband’s apartment was the more palatable option. Grant spent the day getting ready, disinfecting his counters and door handles, and dousing himself with hand sanitizer instead of cologne.

One of the few perks of the quarantine is that expensive restaurants have started offering more affordable takeout options. So we ordered a “family meal” from a fancy, well known restaurant in Los Gatos, and Grant drove 30 minutes to pick it up: roasted chicken, homemade hummus, orzo with herbs, olives, cucumber, and feta, and a snickerdoodle for dessert. It came with a takeout cocktail, engineered for self-assembly in a way that would have made IKEA proud.

Grant handed me my drink and then, in his usual way, took charge of the dinner preparations. I stood back and watched him move purposefully about in this unfamiliar kitchen, opening drawers whose contents I didn’t know, handling plates that were never on our registry, all while wearing a mask that obscured half his face. The foreignness and indefiniteness of our situation suddenly weighed on me. How long would we have to do this? How much of a home would this place become to my husband?

Yet as we sat down at our respective tables and eyed each other over the candlelight, the whiskey starting to wash over us, there was also something undeniably intoxicating about it all — an eighth anniversary that felt more like a first date.

We raised our glasses and made a toast to many more years of novelty and adventure in our marriage, though ideally without a global pandemic in the mix. Grant lowered his mask and took a sip.