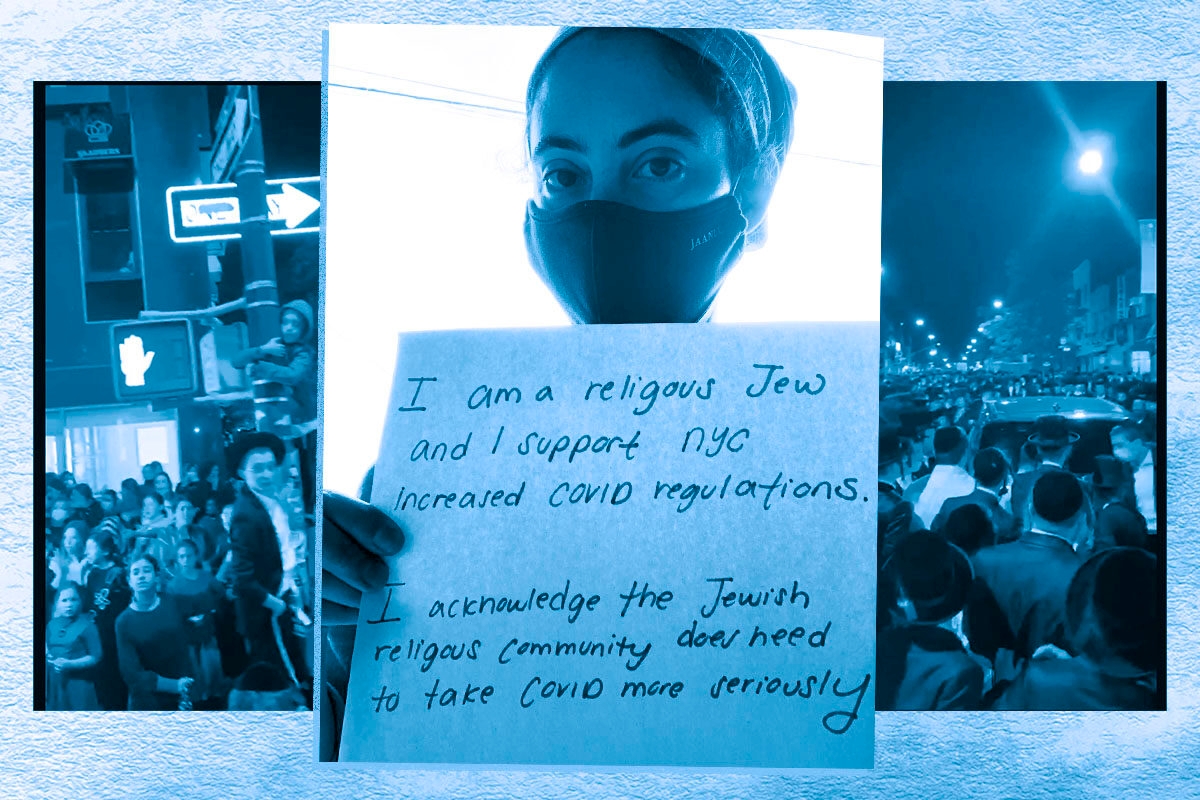 It is Sukkot, the season of our rejoicing. And this week, in the Brooklyn neighborhood of Borough Park, large crowds of Hasidic Jews have gathered — though not in celebration of this joyous holiday.

Instead, local leaders Heshy Tischler, a candidate for the New York City Council, and Kalman Yeger, a New York City Councilman, led hundreds of their fellow Hasidic community members in protest against new lockdown restrictions imposed by New York Governor Andrew Cuomo to prevent the spread of coronavirus. These protesters started fires in the streets, danced, waved flags for President Donald Trump, and burned masks. A counterprotester, someone from within the community, showed up on Tuesday night to call them out. He was beaten with rocks and sent to the hospital in critical condition.

The first protest started on Tuesday, hours after Governor Cuomo announced new restrictions to put parts of the city back into full or partial lockdown — closing non-essential businesses, schools, and limiting capacity in places of worship. Various neighborhoods within Brooklyn, Queens, and the northern suburbs — including some with sizable Orthodox populations — were included within these restrictions.

I’m an Orthodox Jew, and I’ve been disturbed, for years now, by the path many of the Orthodox institutions and their followers have taken in their approach to politics, social justice, and, more recently, Covid precautions. This latest protest in Borough Park protest even took things one step further: with violence.

I’ve seen, first-hand, the ultra-Orthodox resistance to masks, social distancing, and other methods to prevent the spread of coronavirus. So while I’m not surprised by the renewed lockdown and its backlash, I cannot help but be devastated.

In the spring, during the early days of the pandemic, my family and I spent six weeks inside our cramped apartment in Brooklyn’s Crown Heights, one of the first coronavirus hotspots. As story after story about the virus killing another community member filled our newsfeeds, we didn’t dare venture outside. We lay awake at night listening to our neighbors hack away from the virus through our poorly insulated walls.

By June, some restrictions were lifted. And, walking through the streets of my neighborhood, you could hardly tell a pandemic was still coursing through the country. Few Hasidic Jews wore masks as they went about their days, and a general attitude of “We will not be afraid!” resounded through the streets, as if the pandemic was the oppressive former Soviet Union regime, and the non-mask wearers were the brave, undercover Jews who would not let go of their traditions under any circumstance. As the months went by, weddings, engagement parties, and communal gatherings were held and summer camps opened — without masks or social distancing.

I was incredibly dismayed by what I saw. But here’s the thing: While it’s easy to lump all Orthodox people into one group, Orthodox Judaism is actually extremely diverse. While the media may treat it as a monolith body, it is not. Not all Orthodox Jews are Hasidic to begin with, and even within the Hasidic community there are many sects.

Crucially, it’s important to note that within these various sects of Orthodoxy, there are people who are rising up against this tide of denial and Trump-adoration to proclaim their contrasting values. And I am one of them: On Wednesday morning, after reading about the protests, I posted a photo of myself on social media holding a sign announcing that I am an Orthodox Jew who supports lockdown restrictions, and owning up that our communities have a responsibility to protect ourselves more. It was a way for me to proclaim to the world that not all Orthodox Jews are mask-burning protesters — and, perhaps even more so, to give comfort to fellow progressive Orthodox Jews who are dismayed from this recent turn of events.

The Orthodox resistance is out there, and we are working hard to support each other and to get our voices heard. Back in 2016, my husband, Elad Nehorai, along with Victoria Cook, started Torah Trumps Hate an organization for Orthodox-affiilated Jews who are looking to educate, empower, and mobilize themselves on current social justice issues. We continue to pursue this even as we are called, as my husband was, “fake Orthodox Jews” and are accused of being “divisive.”

The sad truth, however, is there’s an added dimension to recent Covid-related upheaval: It is a scary time to be a Jew in America. Cuomo’s singling-out of the Orthodox Jewish community was insensitive and dangerous. Antisemitism is skyrocketing, particularly in heavily Jewish areas in New York. It seems to me that most Americans, regardless of their political views, are in a state of terror right now — and with terror comes inevitable scapegoating of those viewed as different.

I recently read Valerie Kaur’s book, See No Stranger, and I was struck by how blind I was to the emotional and physical violence that so many Muslim and Sikh men in America endured in the aftermath of 9/11. My own husband, a brown-skinned son of Israelis, lived with being called a terrorist by his Midwestern public school peers, even if they were considered “jokes.” He and I went to school together and, I’m ashamed to admit, I either didn’t notice the teasing or found it to be innocent fun. If I am being brutally honest, at the time, I think I also harbored subconscious fears of Muslims and brown-skinned people with head coverings.

As I read Kaur’s book, I realized how deadly and serious a fear of the Other can be. I understand how that translates to present times. So when Orthodox Jews are outraged that Cuomo singled them out, I get it. Thanks to his finger-pointing — no matter how much truth is within it — many Jewish people will be harassed, hated, or worse. I’m already seeing posts on friends’ Facebook feeds of non-Jewish people who are approaching them and cussing them out for what “you Jewish people” are doing.

I feel caught in the middle, heartbroken. I’m heartbroken to be so disappointed and disillusioned by so many of my fellow Orthodox Jews. I’m heartbroken by the way in which I see many of them, as a community, corrupting a lovingkindness-centered religion and following a president who spews hatred and division. I’m exhausted by the continued lack of safety protocol and mask-denial among many religious Jews. I’m horrified by the current violence that Jews opposing the Hasidic protests are enduring. And I’m afraid of the antisemitic backlash.

I love my religion, and I love its long history and its diversity of thought. I want to give everyone across the Jewish spectrum of belief the space to have their say and to share, as we always have, in the collective discussion across the millennia about what we believe Judaism means and wants from us.

But sometimes things go too far — and when beliefs and actions put people in body bags, it is no longer just a friendly, Jewish dialogue. And so, while I believe Cuomo is adding fuel to the fire in a country already leaning more into its white supremacist ways, I need to proclaim, along with so many other progressive Orthodox Jews, that the governor is also right. We, as an Orthodox community, need to do better. We can either hear critiques on our behavior and take offense and retaliate, or we can swallow these hard truths and have them propel us towards repentance.

Equally important, I need the world to know that this is not what Judaism or Orthodox Judaism truly stands for. What you see on the news about Hasidic Jews burning masks and protesting is not Judaism: This is corruption of the truth. Please don’t put us, as a people or a sect, into the same box. Please condemn individuals, but not Jews as a whole. Please be as kind and open-minded towards us as you can.

As Sukkot draws to a close, I pray that God will give us something to rejoice about. May we, as a Jewish and Orthodox community, learn from our mistakes. And may America heal in the coming months and produce a better, more equitable, and more loving society.