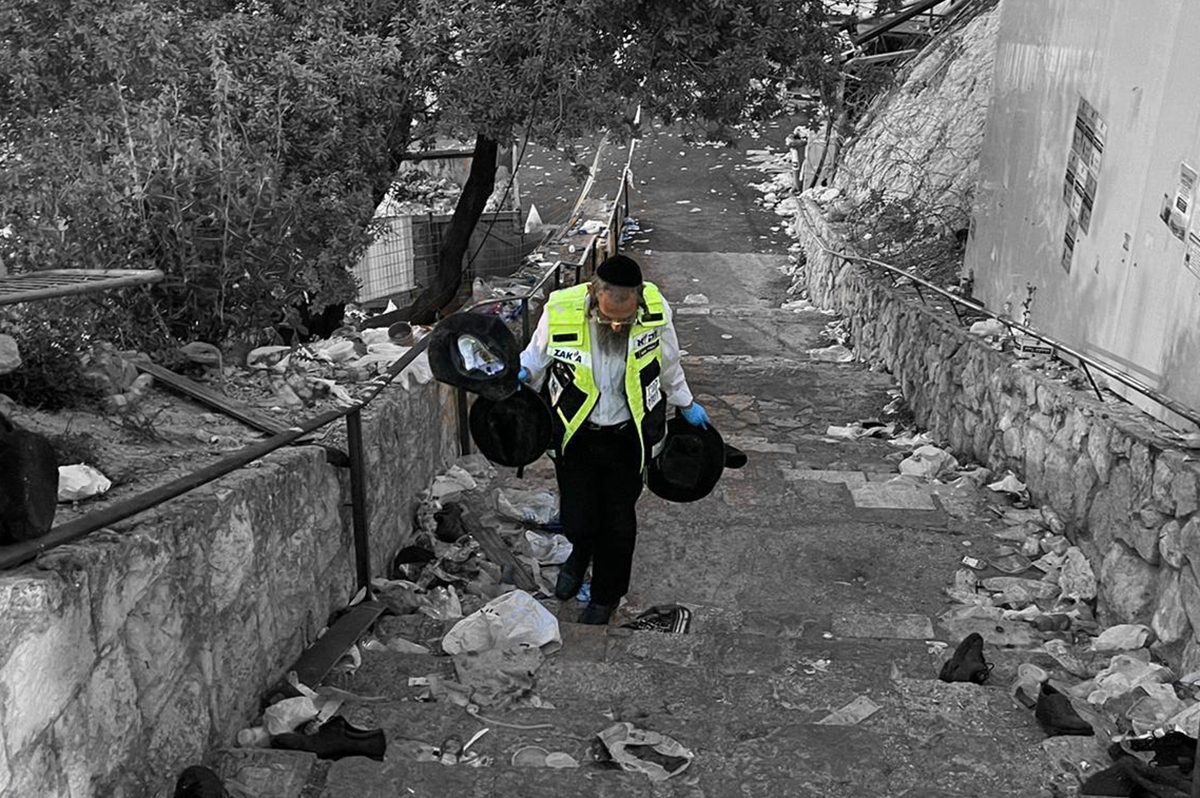 On Thursday evening, as I was just about to close my computer, I saw the news alert from the New York Times: “Breaking News: At least 15 people are dead and dozens are injured after a stampede at a religious celebration in Israel.” A surge of panic ran through my body and I felt like I was going to collapse. I stopped reading, because I knew… this happened at Mount Meron, the site of the tomb of Rabbi Shimon Bar Yochai, where over 100,000 Hasids and other Jews had gathered to celebrate Lag Ba’Omer.

This tragedy would have been upsetting in any circumstances. But my terrified reaction was deeply personal: I knew that my 21-year-old son was there. Horrifying thoughts ran through my head. What kind of devastating things had he witnessed? Was he injured? Was he … I couldn’t bear to let myself think beyond that.

The Friday before, my son had shared with me that his yeshiva in Jerusalem was providing a bus for students who wanted to celebrate Lag Ba’Omer at Mount Meron. I was so excited for him. During the eight months he’s been in Israel, he hasn’t been able to leave Jerusalem very often due to Covid-19 restrictions. Now, he was getting to travel and have an opportunity to participate in a unique experience that I knew he would find deeply spiritual.

My son and I are both deeply passionate about Judaism but our practices differ enormously: I am a Reform rabbi and he is haredi Orthodox. I myself had been to Mount Meron on Lag Ba’Omer some 25 years ago, and I still remember it well — the thousands of Hasidic men dancing and singing; the 3-year-old boys getting their first haircuts; the bonfires and the joyful celebration. While as a non-Orthodox female I experienced Lag Ba’Omer on Mount Meron more as a voyeur, watching with great interest as the Hasidic men celebrated, I knew that my son, although he is not Hasidic, would fully engage in the spirituality and joy of the celebration.

But now, here I was at home in Philadelphia, feeling helpless and terrified about my son on Mount Meron. It was after 8:30 p.m. — way past the time I’d ever normally call him, as Israel is 7 hours ahead of us — but this night was different in every way. Fingers trembling, I reached for my phone and dialed, but I couldn’t get through. Nightmare scenarios raced through my brain. As I sat there, practically unable to move, my phone rang — I saw that it was my husband, who wasn’t home at the time. He was calling to let me know that he had reached our son and he was safe. He described sensing trauma in my son’s voice (how could there not be?), but at that moment only one thing mattered to me: he was alive! I was so relieved, so grateful. Though I wasn’t able to speak with my son — the cell system went down soon after my husband reached him — I knew that he was safe.

I learned the next day that the death toll was 45, and more than 150 people were injured. I was finally able to talk to my son before Shabbat began in Israel; he told me that two young men from his yeshiva were still missing. He shared this news with great concern, and I felt incredibly sad thinking about what Shabbat would be like for all of the young men at the yeshiva, and even more so for those two young men’s families — the uncertainty, the fear that in all likelihood their worst nightmares were going to come true.

Throughout Shabbat, all I could think about was what happened at Mount Meron. Forty-five human beings; 45 families that had lost loved ones. I was so grateful that my son was alive, and at the same time felt this terrible pain for the parents, grandparents, siblings, and children who weren’t so fortunate. I could have been one of them… and I still can’t stop thinking about this.

I haven’t been able to bring myself to read a single article about what happened, though I see the headlines and I hear people talk about it. I envision the crush of people, and innocent people dying of asphyxiation. All I’ve read on the topic are the emails from my son’s yeshiva. Yesterday’s email informed us that there was a funeral for one young man from the yeshiva on Saturday night, after Shabbat ended; there were two more on Sunday. My son said that all three of those who died — one was married, the other engaged, and the other was 21, just like my son — were very well liked and known to be really good people.

Because my son is on a religious path that’s so different than mine, I often think about how dissimilar our family is from those of his haredi peers. We have three kids, while many of them have 10 or 12. Our understanding and observance of Jewish law is very different. But these past few days, I can’t stop thinking about how similar we are; how much all Jews — and all humans, for that matter — love their children. Haredi parents may have more children than I do, but I know that losing one of them is every bit as tragic for them as it would be for me. Just as my worst fear for a brief time on Thursday evening was that something might have happened to my son, for some of these families, their worst fear has come true. My heart is broken for the families of the victims, but their hearts are truly broken forever.

While we are deeply grateful that our son is physically unharmed, my husband and I worry that he could be suffering from PTSD. Fortunately, I am incredibly impressed with how his yeshiva — which I have always respected but usually feel I can’t relate to — is handling this devastating situation. They have provided for all kinds of counseling for those who want it — the young men even make anonymous phone calls to a counselor if they prefer — and they’re working hard to get entry permits to Israel for those parents who want to visit their sons. If they’re able to pull this off, my husband is going to go for a couple of days to see my son, to check in on him and see how he’s doing. I can’t go because I have responsibilities here, including caring for our other two kids. But part of me (OK, all of me) wants to fly over to Israel just for a day, even an hour, just to see my son and to hug him.

Knowing that my son is in good hands — and that my husband may see him in person soon — gives me comfort. And yet, I just can’t move on from what has happened. No matter what I’m doing, my mind drifts off to Mount Meron, imagining that horrific evening that my son was lucky enough to survive — but many others weren’t. As I go about my day, I find myself constantly fighting back tears, although sometimes I don’t bother to hold them back. I will continue to pray and mourn for all of the families who lost loved ones, with the humble acknowledgement that we are far more alike than we are different. May the memories of these 45 souls be a blessing.