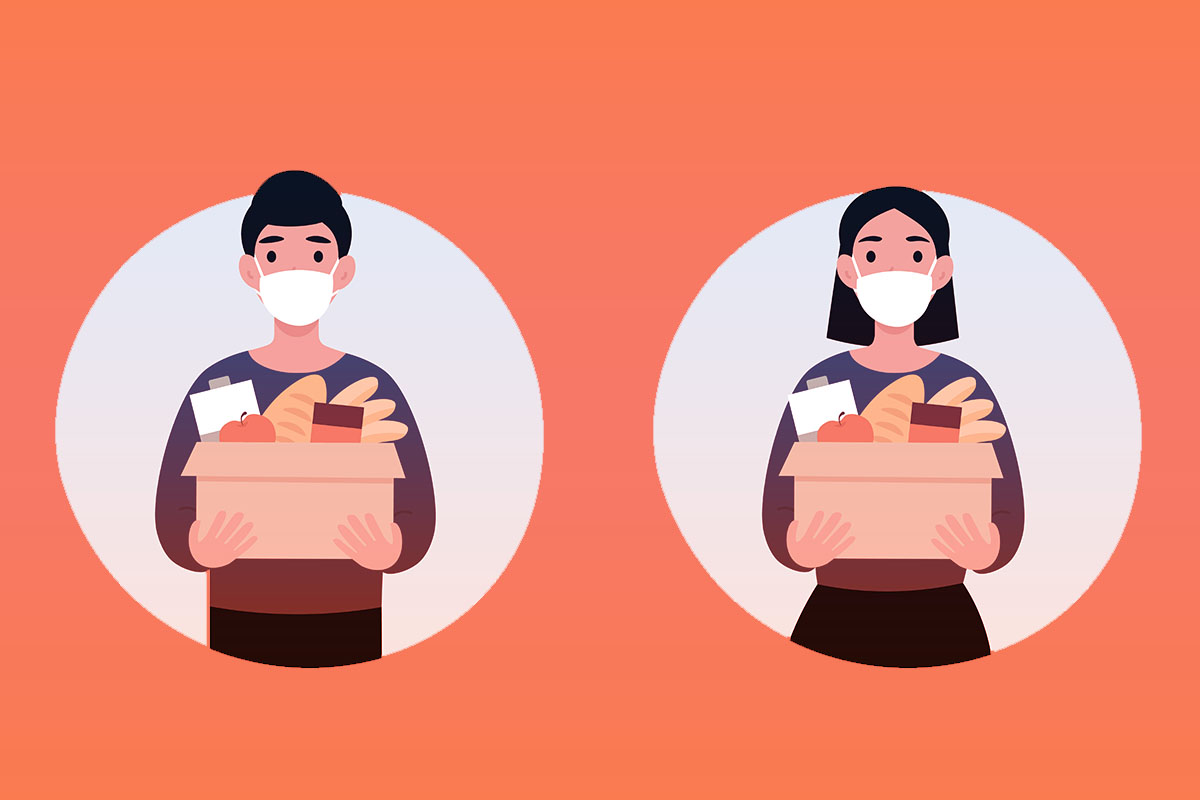 It’s been decades since I ordered food in a McDonald’s. I’ve kept kosher since I was 18, and, outside of Israel, at least, Mickey Dees is decidedly treif.

Except the other day, I found myself entering and ordering a decidedly non-kosher cheeseburger and fries.

To be clear, the food wasn’t for me. After months of sheltering in place in my suburban neighborhood, I couldn’t put off an appointment in downtown any longer. And so, the other day, I headed to Chicago’s central business district, known as the Loop. It was my first journey there since March, and it felt like something out of a dystopian movie. The typical afternoon crowds had disappeared: There were no masses of people hurrying along the wide avenues; gone were the packs of tourists that stopped foot traffic as they gaped at the city’s skyscrapers. There was also hardly any litter — even the alleyways, usually full of detritus, were eerily clean.

Homeless people seemed to be the largest contingent of people I saw. On most corners I passed, there were several. “Can you help me out?” one implored; another asked for money, saying he was cold and wet and needed help. The amount of need felt so overwhelming that, at first, I rushed past them all, ignoring their pleas.

But then, just before I boarded a train that would take me back to the suburbs, I asked myself why I hadn’t helped anyone. After all, I had some cash on me: Why hadn’t I given any out?  Just then, I was approached by a skinny man about my age who asked for help. “Sure, I can help you,” I said as I reached for my wallet.

“I don’t want your money,” he responded. “Can you buy me a meal instead?”

“Of course,” I replied, trying to mask my shock as it occurred to me that, as I almost rushed by here was a human standing here, hungry. I’d given plenty of money to beggars in my life, but nobody had ever asked me to buy them food directly. I asked him where he wanted to go, and he led me to a nearby McDonald’s, one of the few restaurants that was still open — another shocking aspect of Chicago’s newly-quiet downtown.

My new acquaintance ordered a cheeseburger. Before I paid, I hesitated. “Why didn’t he order dinner, too, for later?” I asked. He ordered Chicken McNuggets and some sides. I swiped my credit card: a total of $16 for providing a day’s worth of food. “God bless you — you’re the only one who stopped,” he told me.

In a time of such enormous need, his words broke my heart. After all, the coronavirus pandemic has decimated America’s — as well as much of the world’s — economy. A recent poll by the Pew Research Center found that about one-fourth of Americans have had trouble paying their bills over the past seven months. Demand at food banks has risen at an “extraordinary rate,” according to the New York Times, and up to 14% of American parents now say their children are not getting enough to eat. “The number of families having difficulty affording food has exploded during Covid-19,” the nonpartisan Center on Budget Policy and Priorities recently noted.

Each week, a food pantry near my home offers drive-through food assistance. The line to receive these donated boxes of food is long and filled with later-model minivans. Just a few months ago, many of these people would never have imagined being in this position — but jobs have been eliminated, salaries have been cut, and workers have been furloughed. Poverty and food insecurity aren’t always easy to spot — your neighbor, your child’s teacher, the parent serving on the PTA with you can all be suffering from food insecurity right now.

I’d like to say that the American Jewish community has stepped up to help. And, in many ways, Jewish institutions have indeed pledged funds to alleviate the worst effects of the pandemic. For example, Jewish Federations have created for dedicated Covid-19 relief funds, such as the Combined Jewish Philanthropies’ of Greater Boston’s (CJP) Coronavirus Emergency Fund and the Jewish United Fund (JUF) of Chicago’s Covid-19 Initiative, which provides direct aid and assistance to people affected by the pandemic.

In this unprecedented moment, it’s wonderful that many Jewish institutions are reimagining themselves and redoubling their efforts to help those in need. But are we, as Jewish individuals and families, doing the same?

Judaism mandates giving charity: The Talmud goes into great detail about the many obligations we have to help others, declaring, “Charity is equivalent to all the other mitzvot combined” (Talmud Bava Batra 9a). The Jewish mitzvah Maaser Kesafim instructs us to donate a portion of our income to charity; through the ages rabbis interpreted this to mean that we should donate at least at tenth of our income to charity.

For too many of us, however, performing this mitzvah feels like an impossible ideal rather than a tangible rule for life. I once heard a Jewish children’s song that described the Jewish mitzvah of tzedakah as “coins clinking in a can,” and I was so surprised: Jewish views of tzedakah are traditionally much more substantial — not just pocket change but enough money to materially help other people.

Perhaps now it’s finally time for us to have a difficult conversation about our attitudes to giving charity and to the poor. Over the years, I’ve heard some troubling comments reflecting a profound reluctance to help others. A friend once told me she didn’t donate her kids castoffs to charity because she didn’t believe in helping people bear “children they can’t afford.” A 10-year-old student in one of my Sunday school classes was taken aback one day when we learned that the Jewish sage Maimonides taught that the highest form of charity was giving a poor person a job. “But poor people don’t want to work,” she said, no doubt echoing what she’d heard at home. “That’s why they’re poor!”

Unsurprisingly, the reality is very different: An October 2020 report from the US Bureau of Labor Statistics found that the overwhelming majority of unemployed workers —  7.2 million — expressed hope of finding another job soon. That number was substantially higher than before the pandemic hit.

These attitudes have long been a problem, but today they’re a crisis in our country that we can’t ignore. In a world buffeted by recession and sudden destitution, we need to rediscover the central Jewish tenet of charity more than ever. When people can no longer feed themselves — when people are begging on street corners, wracked by hunger and asking for succor — we have no choice but to step up and help.

It’s time for us as a community to step up to the plate and, if we are in a position to help, we must increase our charitable giving. Whatever your current level of giving is, consider giving more. Reach out to your local synagogue, JCC, or Jewish Federation and ask what they’re doing to help people in your community. If you feel they’re not doing enough, urge them to do more, and consider volunteering to help spearhead new programs. Contribute to the emergency relief funds. Donate to established charities. And remember, too, that tzedakah isn’t always made up of money — if funds are tight we can also help by volunteering our time and expertise.

A few weeks ago, if you had asked me whether there was more I could do to help, I might have said no. I already donate between 10% and 20% of our income to charity. Each week, before I light my Shabbat candles, I set aside money for tzedakah. I might have said I was maxed out — I certainly would never have thought I’d be paying an impromptu visit to McDonalds. But there’s always more we can do, more we can give.

Judaism teaches that we are each here to fulfill a specific set of tasks that only we can perform and for which we’re given the precise, individual tools we require. Let this be our moment to shine. Let this pandemic be our time to step up and start helping our fellow men and women in their hours of need.