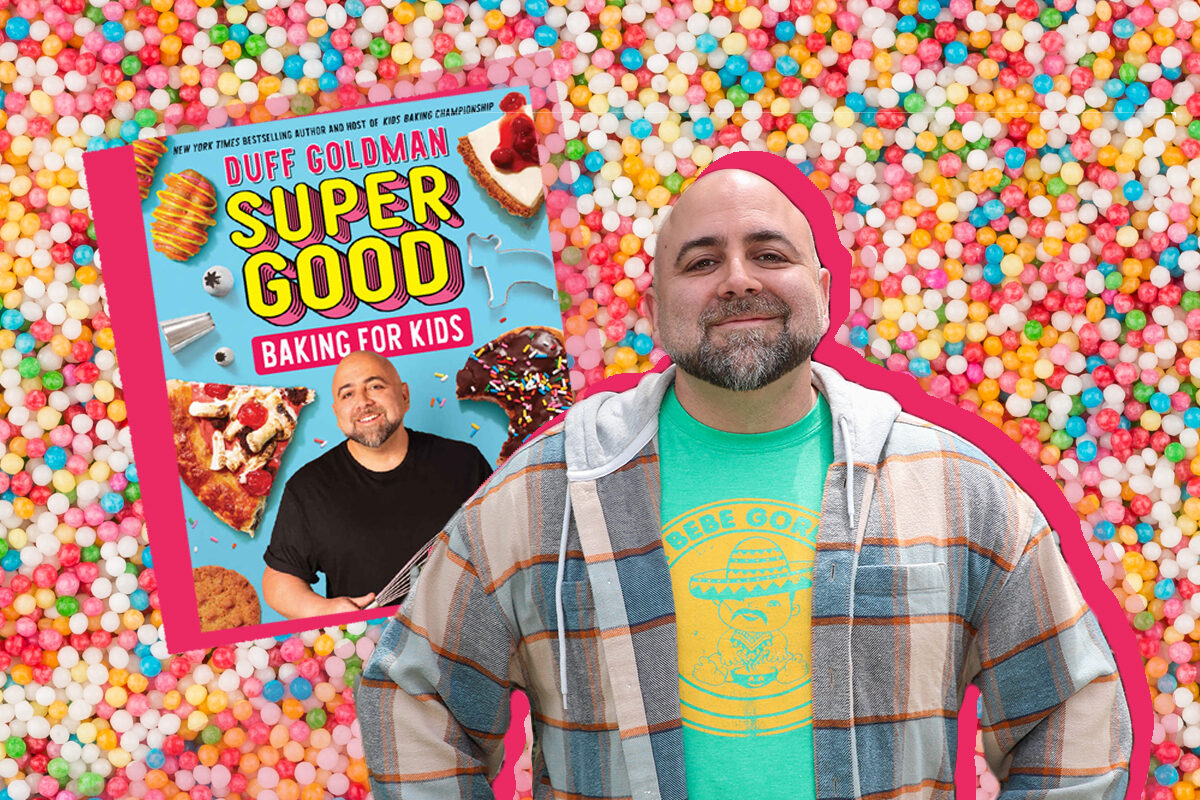 Duff Goldman is a graffiti artist, a bass player, a metal sculptor and, above all, a cake artist. At his nationally acclaimed bakeshop, Charm City Cakes, you can order a cake literally any shape or style. You want one that looks like a baby elephant? No problem. Want to honor your military husband with a cake in the shape of a fighter jet? He’s got you.

His stores in Baltimore and Los Angeles keep him busy as do his roles on television. Goldman has starred in several baking shows — including Ace of Cakes, the reality show that launched him to stardom, and the Kids Baking Championship — on the Food Network. We spoke to him recently and learned that while he may know his way around a pastry brush — and he can shape his cake creations with a drill saw and a blow torch like nobody’s business — under that layer of fondant there’s also a deep thinker, influenced by his Jewish background.

Goldman’s latest cookbook, Super Good Baking for Kids, is out today. It’s colorful, filled with bold graphics, and looks like what you would imagine a kid’s cookbook should look like. But don’t be fooled: This is a serious guide to some very complicated pastries. He says it’s for kids, but the truth is it’s for anyone interested in baking, as he’ll teach you what you need to know in a non-threatening way.

Goldman weaves in all kinds of food-related facts and stories among the recipes. Where in the world can you find donuts? When did people begin to bake? What is color theory, and how do colors relate to each other and to our baked creations? How does yeast work? What is the difference between baking soda and baking powder (honestly, I’ve been wondering about that my whole life) and where to go to get the best food in New York City. (According to Goldman, the appetizing store Russ and Daughters is the “best restaurant in the world;” he loves their matzah ball soup, black and white cookies, and sandwiches.)

Over the summer, Goldman, 45, spoke to Kveller about what role his Jewish background plays in his creative life, why he loves to give back, and his real goal in writing this book. Since our conversation, Goldman broke some major personal news: He and his wife, Johnna, 26, are expecting a baby, due January 2021. Mazel tov to the happy couple!

But that’s not all: Goldman has another secret project in the works. Read on for all the details.

I understand your first job was when you were 14 years old, and you worked in a bagel shop!

Skolnik’s Bagel Bakery in Virginia. I assembled the bagel sandwiches. My favorite bagel then was a toasted onion bagel with cream cheese.

What turned you on to cooking?

I was just good at it. I felt comfortable in the kitchen. I grew up in a Jewish household, and we cooked and ate all the time.

Did your Jewish background inspire what you are doing today?

Jews love to create; we gravitate towards the arts. My great-grandmother was a milliner and a weaver. My grandmother was a photographer. My mom does stained glass and ceramics. I have done my share. We are creative people. I tried to describe Jews to somebody, and I played some klezmer music. If you listen to this, it’s what Jews are: A little silly and a little sad; hopeful and interesting.

As a child, what were your favorite cookies and cakes?

Definitely poppyseed hamantaschen. I loved them and I still think about them constantly.  I also loved Baskin Robbins bubble gum ice cream. It had little pieces of bubble gum. One of my favorite things as a kid.

Do you have a favorite Jewish food that you like to make or bake?

My wife, who is not Jewish, absolutely freaks out for my chocolate babka, which was my great-grandmother’s recipe. I have a whole shoebox of her recipes. A lot of them are written on the stationery from her hat shop — the Hollywood Hat Shop in Wichita, Kansas.

Any one cake, cookie, or dessert that is a favorite of yours in your new book?

You are involved with the organization No Kid Hungry.  What do you do with them?

I’ve been working with No Kid Hungry since 2005, and I do all kinds of stuff. Fundraising. Bake sales. I participate in Chefs Cycle where I, and hundreds of other chefs, ride bicycles 300 miles in three days. Fans sponsor us.

I understand you spoke at Cornell University about the importance of tzedakah.

Tzedakah was a big part of my growing up. When I was a kid, I would bring my coins to the synagogue and put them in the tzedakah box. That was always really great, and it stuck with me. Now that I’m in a position to give back, it feels good to be able to do good. It’s part of my heritage. A lot of times in life, especially right now, you feel powerless. We don’t know what to do. We are so impotent. There are big things that are wrong. We try to change them but it’s like beating your head against the wall. One of the ways I save myself from really going crazy is understanding that there are things that I cannot change. But I can change the people around me. I can be kinder to the people I come into contact with. I can change myself and radiate that out and give people that energy. With tzedakah, when we give with a pure heart, it fundamentally changes who we are, and it makes us incredibly grateful for our life.  By giving and showing others in a good, positive way, what giving can do, that is a way I can effect change.

What would you like a child to come away with after reading your book?

One of the most powerful things you can give somebody is a sense of accomplishment. When you help somebody realize that they are good at something, it’s a really striking change that happens neurologically. You can take a moment to look at your work, pat yourself on the back a little bit, and say, “Wow! I did that.” By being able to see something that exists now but did not exist before can be fulfilling. Before I started, I had flour and butter and sugar and egg. Now I have delicious chocolate chip cookies. In knowing that I took those raw ingredients and changed and transformed them, I get a huge sense of accomplishment. And that’s what I would like to give people. These are real recipes. The donuts in here are deep fried.  Kids are making puff pastry. These are not peanut butter and jelly sandwiches. I want this to be aspirational, I want them to try recipes and mess them up, then figure out what they did wrong and try again.

What’s your next project?

Should I tell you? I’m working on it right now! I’m writing a novel.  I can’t tell you what it’s about. [Writing a novel] is hard but I think the kid’s cookbook was the hardest thing I’ve ever done.  Kids are smart. You can’t pull the wool over their eyes. If they’re turned off, that’s it. They’re onto the next thing.