Ashkenazi Dads Can Pass the BRCA Mutation to Their Kids. It Turns Out I Did. – Kveller
Skip to Content Skip to Footer

Ashkenazi Dads Can Pass the BRCA Mutation to Their Kids. It Turns Out I Did. 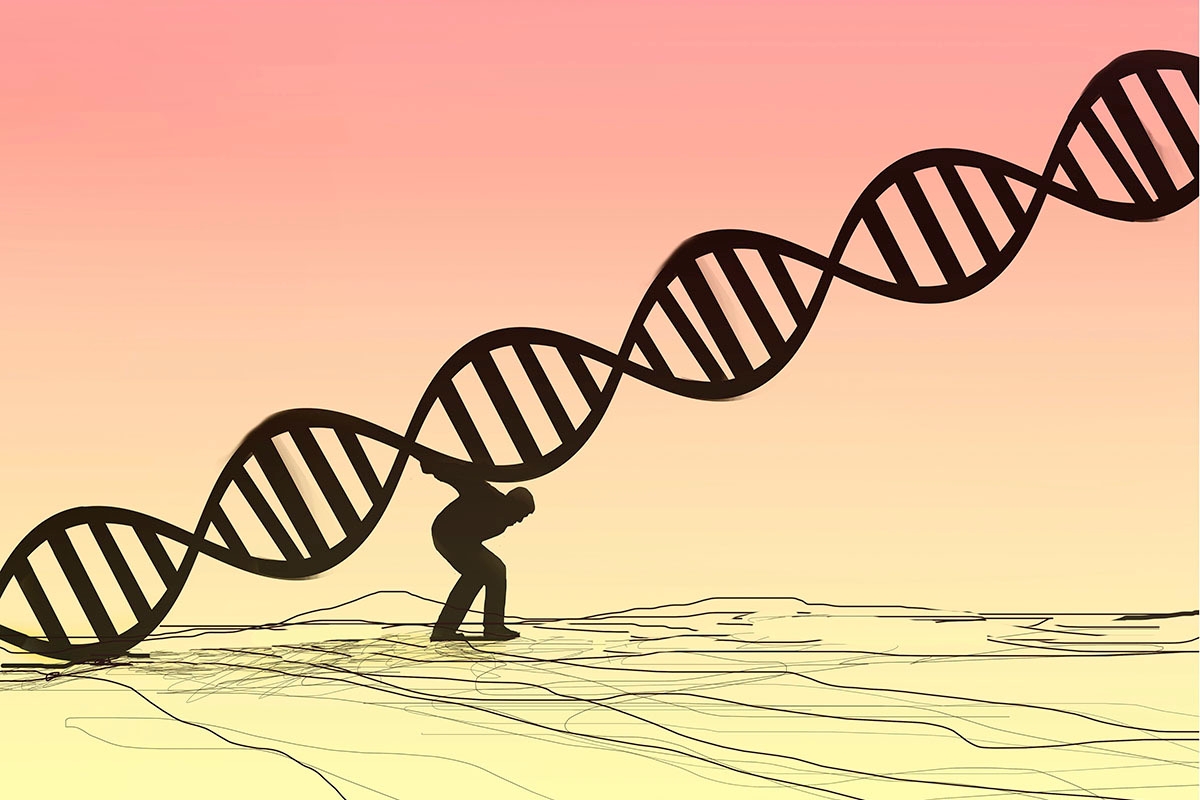 When my wife was diagnosed with breast cancer in 2018, BRCA became a commonly used term in our family. Sometimes called the “breast cancer genes,” BRCA1 and BRCA2 are two separate but related genes that can carry hereditary mutations. Though they are most commonly (and mistakenly) associated only with breast and ovarian cancer in women, the reality is these mutations increase the risk of breast, ovarian, pancreatic and prostate cancer, as well as melanoma.

In other words, the BRCA mutation can affect anyone.

My wife’s oncologist suggested genetic testing to see if she had a BRCA mutation, which has a 50% chance of being passed from parent to child. With two adult daughters and an adult son, our anxieties about the test results were high. We breathed a sigh of relief when we discovered that my wife was not only mutation-free, but that her cancer could be treated with a lumpectomy, radiation and cancer-fighting medications. We thought we were in the clear with regard to cancer.

Around this same time, however, I purchased a “direct to consumer” genetic test to learn more about my ancestry. When my genetic report arrived, it confirmed that I’m 98.6% Ashkenazi Jewish — no surprise there! — and displayed nearly 1,000 relatives that I could connect with on the site. What fun it would be to learn of and interact with new relatives from all over the world, especially since I’ve always thought of myself as being from a small family.

Then I clicked on the “health” section and received the shock of a lifetime: a harmful variant had been detected in my BRCA2 gene. I thought “Oh, [expletive deleted], what will this mean for my family and me?” Considering that none of my family members had any of the cancers that are linked to the BRCA mutation, this news was even more surprising. I’ve since learned that only 2% of the people with the BRCA mutation learn of it secondarily, like I did (meaning, I wasn’t looking for it when I underwent genetic testing). I followed up with our geneticist, who confirmed with a blood test that I indeed carried the BRCA2 mutation. As my wife became a cancer survivor, I became a “previvor” — a term I had never even heard before.

After the shock wore off, my response to the news was to learn everything I could about BRCA2. While roughly 1 in 400 people have a BRCA mutation, that number increases tenfold, to 1 in 40, for the Ashkenazi Jewish population. For women, BRCA2 mutations increase the average lifetime risk of breast cancer from 12.5% to roughly 50%, while the ovarian cancer risk jumps from 1.3% to as high as 20%. I wondered what this would mean for my daughters if they tested positive, and I felt a tremendous sense of responsibility to help them deal with whatever challenges they may face from inheriting my genetic mutation.

BRCA2 mutations also carry serious health implications for men, including a 30 to 60% lifetime risk for prostate cancer, compared to 12% for the general population. These men are also more likely to develop an aggressive form of prostate cancer at a younger age. The lifetime risk of male breast cancer — yes, that’s a thing — is as high as 7%, compared to 0.1% in the non-BRCA population. For both men and women, the odds of getting pancreatic cancer jump from 1.5% to as high as 10%, and studies have linked the mutation to an increased risk of malignant melanoma, including in the eyes.

Clearly, a BRCA mutation is something no parent wants to pass on to their child — but that’s exactly what happened in our family. After more than a year of discussion and angst, my wife and I decided to tell our three children of my situation, and to be there for them as they decided their own course of action. Each chose to get tested, and it turns out that each has the BRCA2 mutation. So much for 50/50 odds.

As unfortunate as my story sounds, inheriting a BRCA mutation is neither a death sentence nor a guarantee of cancer. As my family works together to process our “new normal,” we have become healthier and closer. At age 57, I’ve scaled back my work and devoted more attention to my health, my family’s health, and the world of genetic mutations and BRCA. I’m working with a team of professionals to exercise and shed excess pounds, cut out certain foods, and otherwise live a healthier lifestyle. I hope cancer doesn’t find me, but if it does, I plan to be in “fighting shape” and detect it early, so I’ll be much more likely to beat it.

Our 29-year-old daughter responded to her diagnosis by focusing on her health and choosing to freeze her eggs, thereby expanding her options to have children and making it possible to screen for BRCA mutations before implanting fertilized eggs. The experience of accompanying my daughter to the fertility clinic and helping her with hormone injections has been both awkward and meaningful. When pangs of guilt start creeping in, honest conversation — often with a few “Dad jokes” mixed in — has helped us stay focused on collectively addressing the challenges we face. As for our son and younger daughter, they are taking the news in stride and planning for a life that just happens to include the mutation.

For our daughters, this means frequent mammograms, pelvic exams, ultrasounds, MRIs, and other diagnostic procedures, and when the time is right (is there ever a “right” time?), double mastectomies and hysterectomies. For our son and for me, it means endoscopic ultrasounds, abdominal MRIs, colonoscopies, PSA tests, prostate exams, breast exams, and skin checks. We will be spending much more time with urologists, gastroenterologists, dermatologists and geneticists than we ever imagined. In this way, our family is doing all we can to keep cancer at bay and beat BRCA, for ourselves and future generations. Hopefully, we’ll never have to be on a first-name basis with an oncologist.

I didn’t go looking for BRCA, but since it found me, I’m doing all I can to help others, especially men — who tend to be less familiar with, or less willing to deal with, issues surrounding the mutation. I’ve enrolled in several BRCA-related studies and am devoting time and money to nonprofits focused on hereditary cancer, including Facing Our Risk of Cancer Empowered (FORCE), an organization that promotes hereditary cancer research and supports those with BRCA and other inherited gene mutations. As a man with a BRCA mutation, I have been welcomed not only into the “BRCA Brotherhood,” but also into many support groups (of mostly women) that have been incredibly helpful and inspirational.

Not only is Father’s Day coming up on Sunday, but this also happens to be Men’s Health Week. If you’re wondering if hereditary cancer might run in your family (or even if it doesn’t), now may be the right time to talk to a genetic counselor about getting tested. Knowledge is power, and it just might save your life or the life of someone you love.