‘SNL’ Missed the Mark With Their First Portrayal of Doug Emhoff 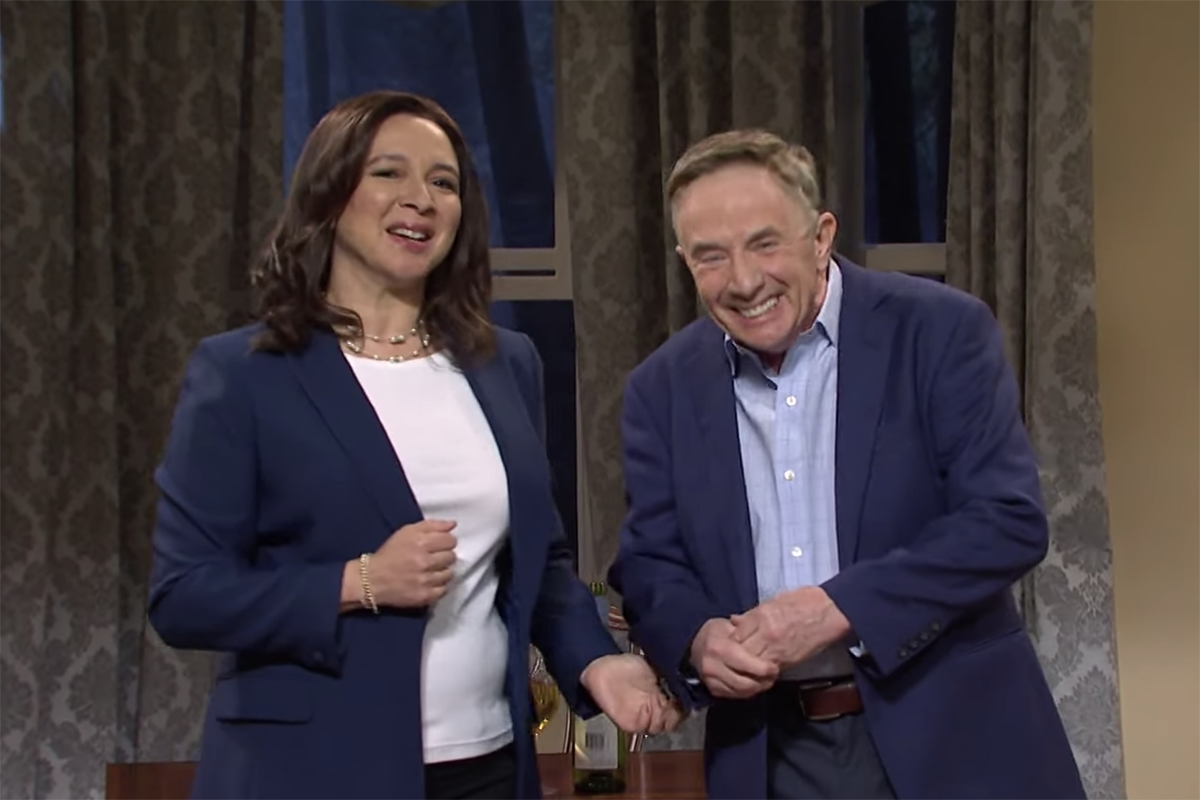 As Jews, laughing about ourselves is our bread and butter (or, you know, matzah and butter, given our current holiday season). For decades — heck, for centuries — Jewish comedians, from Groucho Marx, to Mel Brooks, to Jon Stewart, to Ilana Glazer, have lived to make others laugh, often at their own expense.

This is why I couldn’t wait for a good comedy sketch about Doug Emhoff, the first Jewish second gentleman, and a guy who does not mind throwing a self-deprecating joke in the ring here or there (or even revealing the matching Passover outfits of his childhood).

Unfortunately, this past weekend, on the night of the first seder, Saturday Night Live took a stab at poking fun at Emhoff — and, well, in my opinion, they really missed the mark. In short: a Passover miracle it was not.

Before we get to the actual sketch — the first time the annual White House Passover seder made it onto the iconic sketch comedy show, though this year was also the first time said seder was “open” to the public via YouTube —  I just want to say that I’m not here to lob any accusations of antisemitism at the show (at least not today). Did the sketch’s writers resort to some cheesy Jewish tropes? For sure. But the reason the sketch was so cringe-worthy — for me, at least — was how false it rang and unfunny it was. Aside from antisemitism, most Jews do take offense to really bad humor — especially when it’s about us.

When the sketch started, I was feeling pretty good, which is how I usually feel when Maya Rudolph is onscreen. And, overall, Rudolph, a master at impressions, makes a pretty great Kamala Harris. I was truly thrilled to have her host the show and do a skit about a Jewish holiday — especially a meaningful event like the White House Passover seder. It was thrilling to hear her say words like “pesach” and “chag sameach” with a very solid Hebrew accent. That’s not especially surprising, given that Rudolph was raised by a “pretty adorable Jew” — her father, Barry Rudolph, was her sole parent after her mother, Minnie Riperton, died from cancer when Rudolph was just 7 years old.

And while I would also consider Emhoff a pretty adorable Jew, SNL’s portrayal of the history-making lawyer by comedian Martin Short was anything but. Aside from relying on Jewish mom tropes (Rudolph’s Kamala describes the Four Questions as, “How’s school? Did you eat? When are you giving me grandchildren? And what’s with that haircut?”), Short’s Doug relies on the Jewish trope of the nebech — a Yiddish word used to describe a timid, ineffectual person.

“I’m just a shy entertainment lawyer,” and, “I don’t like strangers, they frighten me,” are things Short’s Doug says throughout the sketch, in which he also admits to having stage fright at this fictional unity seder. IRL, the actual second gentleman has deftly led many events by himself — including this year’s truly delightful White House Passover seder. In that context, the cheap and dried-out like week-old matzah jabs at Emhoff feel lame and, also, totally inaccurate.

Reality check: Does Doug Emhoff seem sheepish and a little dorky at times? Of course! But as his first wife, Kristen Emhoff, wrote on Twitter, “shy entertainment lawyer he is not.” (In fact, I’m pretty sure “shy entertainment lawyer” is an oxymoron? But I’ve never hired one myself so I can’t say for certain.) Still, Emhoff is a very successful professional and someone who seems quite at ease when speaking publicly.

Hmmmm @ColeEmhoff and I def got left out of that skit @nbcsnl 😉. That’s not the Doug we know! https://t.co/xayAW8s6ND

If this wasn’t bad enough, Short’s particular nebech oscillates between a helpless, shy Jew and an over-sexualized creep. In the sketch, in an effort to help Doug get over his stage fright, Kamala asks him to pretend it’s just the two of them. Immediately, Short’s Doug gets a little too handsy. It’s possible the writers intended to portray this thirst as mutual flirtation, but instead, it just feels like Short morphs into a total horndog, and Rudolph looks ill at ease in those parts of the sketch — which, as a woman who has been touched uncomfortably (as most women have), makes all this an even less pleasant viewing experience.

Girl is swatting him away like an insistent fly #SNL

Is Emhoff often visibly affectionate with his wife IRL? You bet! But that affection seems genuinely tender and mutual. He nudges her by the shoulder; she looks at him affectionately. It’s cute but it also seems non-sexual. It’s like seeing your Jewish grandparents holding hands — is it sweet? Yes! Do you ever want to think of them doing anything more than PG-rated stuff? No, please God, no. So, yeah, thank you SNL for putting that image in our heads — we don’t want it and please take it back.

The sketch cycles through a lot of other prerequisite Jewish stereotypes — Manischewitz wine and gefilte fish are mentioned, and Doug makes a joke about the prophet Elijah and the seder song “Dayenu.” (“There’s a Passover song called ‘Dayenu,’ and if you’re just vice president,” he tells Rudolph’s Kamala. “Oh no, that won’t be enough,” she replies.) It’s almost like someone is checking off a really old checklist of Jewish jokes.

What’s more, Short is not Jewish. Perhaps that would not have been a problem if his portrayal of Emhoff was great — I actually feel like former SNL cast member Jason Sudeikis, who is not Jewish, would make for a pretty cute Emhoff — but, instead, it highlights how unappealing his portrayal of the most high-profile Jew in the country’s political landscape is. It’s especially jarring when another iconic political Jew, Bernie Sanders, is played by his actual (Jewish) cousin, Larry David. Are all Bernie Sanders sketches on SNL pure brilliance? Well, no — but also, yes, simply because David is there. By contrast, both the casting and the acting here feels very clumsy and off.

The Martin Short #SNL thing is weird. Doug Emhoff is the first Jewish spouse of a VP and this is the first seder celebrated in a VP household. Short isn’t Jewish so I’m not sure why they went out of their way to cast him. This isn’t a cancel culture complaint, I’m just confused.

The seder sketch does have some fine moments, from an appearance of Marjorie Taylor Greene played by Cecily Strong, who climbs through a window, to a brief but fierce cameo from Chloe Fineman as Ella Emhoff, Doug’s daughter who, according to the Forward, does not identify as Jewish. The Jewish comedian is definitely a great choice to portray Ella, a professional model, and hearing her say, “Momala is serving matzah, while I’m serving looks,” is kind of adorable. Perhaps the funniest part of the sketch comes from Aidy Briant as Ted Cruz, who comes to the seder with cupcakes and pigs in a blanket — “We can’t have pork or bread, so thank you,” is how Kamala addresses his offerings. (Deep cut: The Hebrew name for pigs in a blanket is actually Moses in a basket!)

At the end of the day, what really gets me is that this first SNL appearance of the second gentleman is just so deeply unfunny — offensively so. Now, I know, I know. Some of you are saying, “Lior, it’s SNL. SNL! Why are you expecting it to be funny when it so rarely is?!”

Well, OK. Fair point. I’m not saying I expected better, but I had hoped for something a bit less crass and off-putting. I can honestly say the secondhand embarrassment and somewhat triggering groping made rewatching parts of this sketch for the purpose of writing this piece genuinely hard.

More than anything, this sketch left both my husband and me deeply, deeply uncomfortable, and really not wanting more. So SNL, dayenu! If you’re gonna do Doug like this, this sketch is more than enough.