That Time My Jewish Grandma Befriended Cassius Clay in Miami 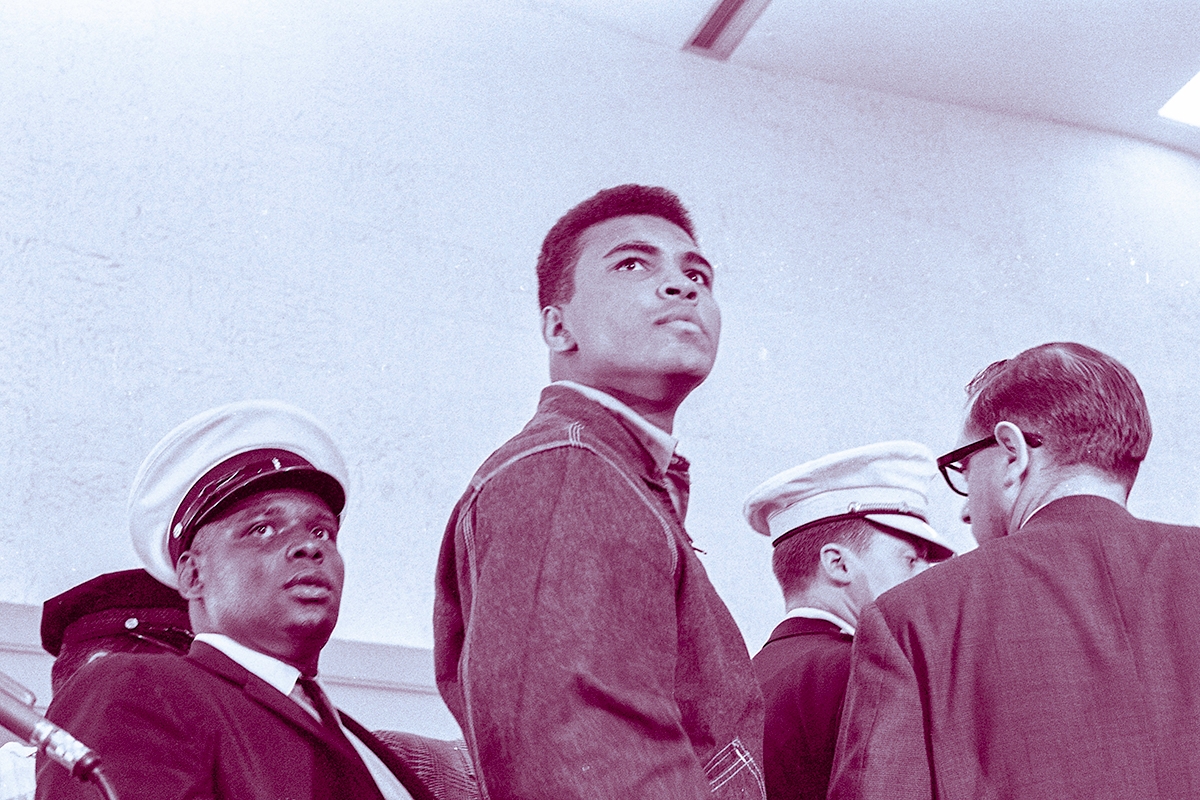 The movie One Night in Miami is streaming on Amazon Prime and it’s well worth a watch. Directed by Regina King, the film is a fictional account of real-life events that happened on February 25, 1964 — the night Cassius Clay, Malcom X, Jim Brown, and Sam Cooke celebrated Clay’s world heavyweight boxing championship in Miami.

The movie is nominated for two well-deserved Golden Globes —  one for King for Best Director; one for Leslie Odom Jr. for Best Supporting Actor for his portrayal of Cooke — and has provoked very timely discussions on race, achievement, and history.

Watching the film sparked important conversations on these topics with my family. But it also stirred up an almost-forgotten story about my Jewish grandmother — who, during that same winter of 1964, struck up an unlikely friendship with the man soon to be known as Muhammad Ali.

Yes, it’s a tale that stretches credibility, but it remains one of my favorite anecdotes about my maternal grandmother, Betty Mendell. Here’s how the family lore goes: In February 1964, Betty went to Miami Beach in order to stay with her machetonister — a Yiddish term meaning your child’s mother-in-law. Bess wasn’t well and her husband, Harry, had a business to run in New York City’s Garment District. Bess and Harry had a lovely two-bedroom apartment in a fancy building just off of Alton Road, a newly constructed behemoth on the site of the old Art Deco Flamingo Hotel.

My grandmother would have been a natural for Miami Beach in 1964. She was always a little too much for her hometown of Fall River, Mass., with her lacquered blonde hair, rhinestone-studded sunglasses, and long cigarette attached to her lip. I’m sure she went to Miami Beach with her fox fur stole, or maybe the mink, in case there was a chill in the air. Her suitcases were probably packed with day dresses, slacks sets, Pucci-style muumuus for relaxing, as well as high heels and five different pocketbooks — you know, everything one needed for a month in Miami.

But when Betty arrived in Miami, Bess was sicker than had been described. The fancy dresses didn’t get worn and the furs stayed in their protective cloth bags. The days were spent quietly, the two women sitting on the patio playing gin rummy. By early evening, Bess needed sleep, so Betty used her free time to head to a coffee shop. We’re pretty she went to Wolfie’s, a Miami Beach institution — it was a lively place, with people coming and going, and it served the kind of Jewish deli food she loved and couldn’t get in Fall River.

One night, some two weeks into her stay, Betty was working a crossword puzzle, a cup of coffee (one saccharine tablet, no milk) in front of her, along with a yet untouched piece of coconut cream pie. She’d taken her usual stool at the long counter, attended a kind Black man she said was named Earl, who worked nights and weekends.

Although Miami was still a pretty segregated town in the early 60 — it was the South, after all — lunch counters had been desegregated in Miami even before the national effort got underway. So what happened next was incredible, yes, but plausible.

Betty’s concentration on the puzzle was interrupted with the arrival of a young man, who took the stool one seat away from hers. My grandmother described him as gorgeous — coffee-colored skin; large, wide-set dark eyes — but it wasn’t just his looks or his height and bulk. He emitted a wave of something electrical; you couldn’t not notice him.

“Two fried eggs and a steak, rare, please, Earl,” Betty said the young man said, his voice a higher register than one would expect from someone his size. “And a piece of that fine-looking pie just like the one in front of this young lady.”

My grandmother looked over — being married to a consummate flirt, she knew one when she saw one. “Flattery will get you nowhere, young man,” my grandmother said. “Are you sure you want to eat all that food this late at night?”

“Leave him alone, Betty. He’s got a project underway, don’t you, son?” said Earl, chastising my grandmother. “Betty, meet Cassius Clay. He is a young man on the move alright. He needs his strength, so don’t go on about what he eats.”

“Yessir, I do,” Clay responded. “Now, let’s take a look at the puzzle you’re working here, Miss Betty — I love these things.”

My grandmother was not a sports fan, so the name didn’t register with her, but she was immediately drawn to him. While I wouldn’t quite call her politics progressive, she’d been subject to enough antisemitism and witnessed enough racism to believe Blacks and Jews needed to work together. Ultimately, she loved words, and so did the young man. And apparently that’s all it took for this unlikely friendship to form — my 5’2” grandmother, in her summer-weight knit pantsuit, and Cassius Clay, training for the fight of his life, needing time to exercise his mind.

The next night, Betty’s new friend was there again. For the next two weeks or so, their visits became a nightly ritual, as my grandmother told it, doing the puzzle, discussing the events of the day. When Betty finally understood that Clay was a prizefighter, and that he would be fighting Sonny Liston, she reportedly went into full Jewish mother mode. “You’re going to get killed!” she warned. “You’re far too smart to be doing this for a living! You could be a writer, using your brain for something other than a target!”

“Do you really think I’d risk this pretty face and my pretty brain?” he allegedly replied, smiling. “I’m not worried about Sonny Liston, not one bit.”

But Betty worried. She had become very fond of her young friend, and a little in awe of the way his mind worked. She didn’t want the mind or the man at risk.

Gradually, other people joined their nightly tete-a-tete. Clay would recite his poetry, expound on world affairs, and tell anyone who would listen that he was going to be the champion of the world. Betty reveled at being at the edges of this group — they were funny, they adored Clay as she did, and they included this plump blonde with the throaty laugh.

But Bess’s health was worsening, and it was time for Harry to be by his wife’s side. The night before Betty was to leave Miami, as she packed  all her unworn clothes into her suitcases, she said she pulled out a white cotton sheath with pink rhinestones and pearls at the collar. She thought the occasion called for a little sparkle. She smoothed Revlon’s Fire and Ice over her lips, patted her hair, and headed to Wolfie’s.

“Well, look at our lovely friend, Mr. Earl.” Clay reportedly said. “You look like you are going out to a party, Miss Betty.”

Earl, however, had an inkling of what was up. “I think this is for us, Cassius. Miss Betty is going back up North tomorrow, isn’t that right?”

Betty sat down at her customary stool, lit a cigarette, and ordered one final piece of coconut cream pie.

“Miss Betty, do you have a pen in that pocketbook?” Clay asked her.

What didn’t my grandmother have in that pocketbook? All three of them probably could have lived for a week on what my grandmother kept in her purse: hard candies, crackers, travel garlic and onion powder shakers, BandAids, a sewing kit, and more. She pulled out the pen.

“You just sit right here and enjoy your pie,” Clay told her. “I’m going to give you something to take home. Earl, hand me an extra placemat.”

And with that, the story goes, Clay wrote a poem for my 58-year-old Jewish grandmother. He folded the placemat, handed it to her, and told her to read it on the plane.

I wish I could tell you what the poem said. I was only 6 when my grandmother returned from Miami that winter. I have a hazy memory of seeing the placemat passed from hand-to-hand — though now I’m older than my grandmother was that winter. But I do remember Betty proudly telling her story to everyone she knew. She could tell a good yarn — including one about an alleged double date involving noted Jewish gangster Longy Zwillman —  and often embroidered around the edges for effect. In this instance, however, she had the placemat to prove the tale.

Clay won the fight, of course, and my grandmother was as proud as if he were her own son. Clay became Muhammad Ali, and Betty was glad he refused to go to Vietnam — she didn’t want him to get hurt, or worse. Bess died shortly after Betty’s visit, the sadness of her death blunting the thrill of my grandmother’s brush with fame.

You’d think this one-of-a-kind treasure would make my grandmother a footnote in boxing history. But the placemat was tragically lost — as lost as the words that these four iconic men shared that night, as depicted in One Night in Miami. What remains is memory of a young man whose words would raise him up as much as his fists, whose life would be unalterably damaged by the blows he took to get to the top of the world — just as my grandmother had feared.

One Night in Miami captures the light of a remarkable young man — a light that my grandmother was proud to bask in first hand, if only for a short while.