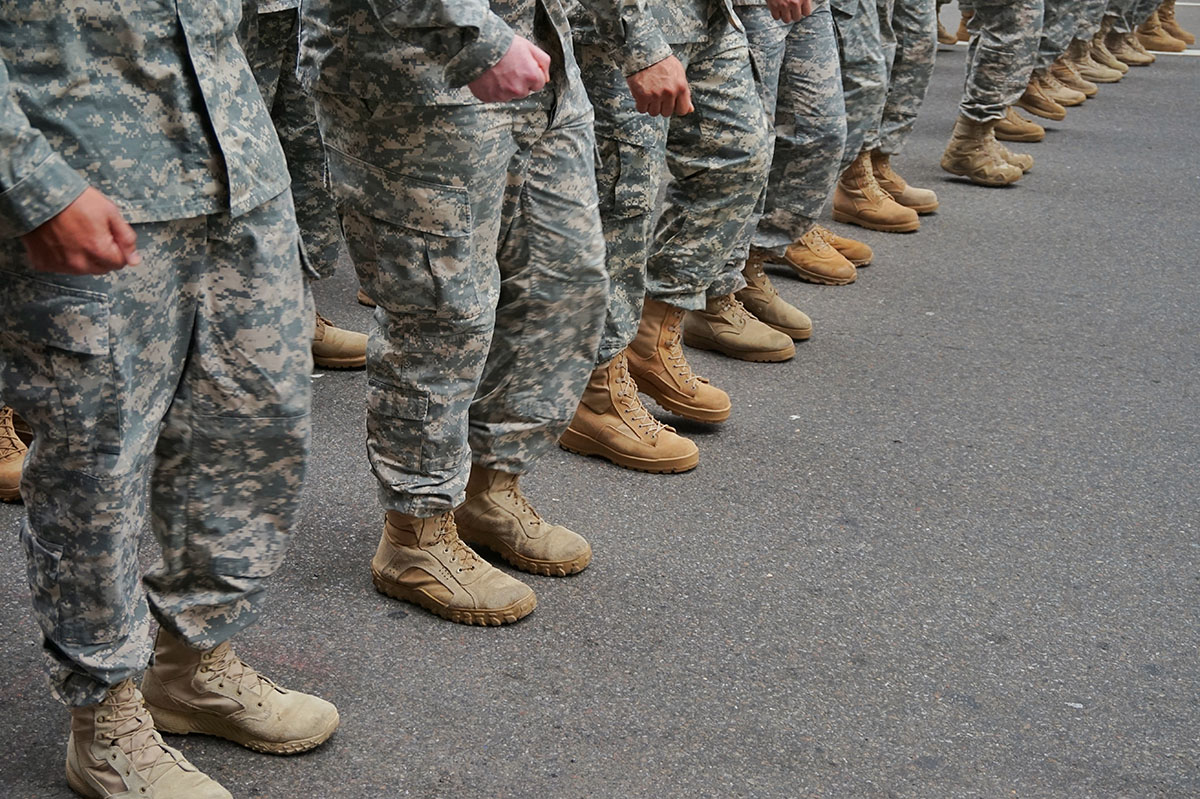 As a Jewish military family, we have had the good fortune of adorning doorposts all over the world with our mezuzah. For the past 12 years, we’ve lived in opposite corners of the world — including in Hawaii, Japan and Germany. We’ve had amazing adventures, made incredible friends, and created family stories that will most certainly be passed down from generation to generation.

With my husband’s service, however, came the sacrifice of a Jewish community we could call our own. Having grown up outside of Philadelphia as a Jewish day school kid and attending synagogue every Shabbat, being thrown into a life that lacked a stable Jewish community was jarring. When my husband and I first married 13 years ago, I did my best to create holiday meals for the two of us (when my husband wasn’t deployed), or with the gaggle of other service-affiliated Jews we would stumble upon wherever we were stationed. As a newly married couple, creating our own familial Jewish customs was exciting, and sharing those experiences with other similarly newly married Jewish couples was enriching.

Once we started having kids, however, my heart yearned for the Jewish community of my childhood. I missed the elderly congregants who always carried wrapped caramels to hand to children; the rushing to the bimah to collect candy that was thrown at the bar or bat mitzvah teen; the running around the lobby during the Torah service with other kids and eating tiny bagels with cream cheese and lox at the oneg after services. I also longed for beautiful, extended-family Jewish holiday celebrations; the seder table bursting at the seams with attendants; the layered harmonies of congregants joining together at synagogue services to recite ancient prayers that I myself memorized some 30 years ago. All these are things that feed my soul, make me feel whole, and connect me to my community. And, as a result, I desperately yearned for my children to experience all this as well, confident their souls would be nourished by these very same things.

Instead, however, my kids — who are now 9, 8 and 6 — made do with musty Jewish chapels on military installations that cared little about the Jewish communities they were supposed to serve. They said “hello” and “goodbye” over and over again as we welcomed new service members and bid farewell to others who were either moving or deploying. Sometimes, my children attended services that were only held because I led them; oftentimes our family members were the only people in attendance. Whatever religious school they experienced was because I cobbled together some form of Jewish education, and which included any other Jewish families who happened to be stationed with us for the time being.

As Jews on a military base, our services were often unstaffed by religious personnel. We were also often locked out of our religious spaces and left without classroom supplies when using common education facilities. Conversely, the large and prolific religious groups on the same bases had multiple religious affairs assistants on staff, as well as open doors to many different chapels and even a budget for their religious education, including textbooks and arts and crafts supplies. Our complaints frequently fell on deaf ears until we got more senior level military personnel involved. Oftentimes it seemed as if those in charge were just waiting for us to move rather than handle these issues head on.

Suffice it to say, when we got word that we would finally be moving back to the continental United States after 12 years of overseas duty, I was so excited that we’d finally have a Jewish community in which to raise our children. To say that my kids were excited about the prospect of a Jewish community would be an understatement: Years of cultivating a Jewish home, filled to the brim with a love of Jewish learning, foods and celebrations, resulted in their excitement to finally share their Judaism with so many others. It’s so comforting to be seamlessly understood by others, and they looked forward to not having to explain why mommy bakes challah every Friday, or why they can’t attend school on the High Holidays. At last, we’d live in a community with a robust religious school, a Jewish overnight camp and readily available kosher meat! Finally we’d have a community with which to water the Jewish seeds I had sown, giving them the sustenance they needed to find their way through their own Jewish journey.

In the midst of the pandemic, in July 2020, we made our big international move from Stuttgart, Germany to Spokane, Washington. (Four flights in all, a total of 38 hours of travel with masks firmly in place, with one lost tooth somewhere over Greenland.) Heartbreakingly, the one thing I had been longing for — a vibrant Jewish community — was finally within arm’s reach, but due to Covid, we couldn’t access it. We met with our new rabbi via Zoom, and we attended services and religious school in the same manner. The community welcomed us with kind emails, a hearty welcome in the synagogue newsletter, as well as challah and prayer books, which were dropped off to our quarantine location. Still, there was no one who could give my children a hearty “Good Shabbos!” hug on Saturday mornings at shul, or let them sit on their laps and giggle during a particularly long sermon, or hand off wrapped candies hidden in their pockets. Instead, we were relegated to experiencing Jewish community via squares on a screen — more sacrifice of the very thing of which we dreamed for so many years.

Finally, however, thanks to the scientific wonder that is the Covid-19 vaccine, our synagogue held its first in-person service last month after more than a year and a half. It was held in our large, outdoor space, with a mask requirement and distanced chairs. We took our seats amidst the birds chirping and the breeze gently blowing, and we watched as a congregant lit the Shabbat candles before the rabbi began the service.

There were three women sitting behind us. As our voices gathered momentum and we began to remember what it was like to pray together, these three women began to harmonize. At first they did this in small bits here and there, and eventually they harmonized entire prayers. My girls’ heads swiveled, trying to figure out who was making such beautiful music —  unbeknownst to the singers, their voices, singing our ancient prayers, were filling a void my children didn’t know they had, but that I most certainly knew existed. My oldest finally leaned over and said, “Mommy, listen! It’s so beautiful!” I turned my head and cried.

At long last, instead of the reverberating sound of their own voices echoing in an empty military chapel, my children got to hear the voices of our Jewish people come together as one. What’s more, they got to add their own voices to the mix, and learn how doing so magnifies the depth and breadth of our collective experience. May this be the turning point as my children learn what it’s like to be surrounded by a community with which they can welcome Shabbat, celebrate holidays, and pray with all their hearts, and all their souls, and all their might.