My Neighbor Had a Confederate Flag. My Daughter Had the Perfect Response. – Kveller
Skip to Content Skip to Footer

My Neighbor Had a Confederate Flag. My Daughter Had the Perfect Response. 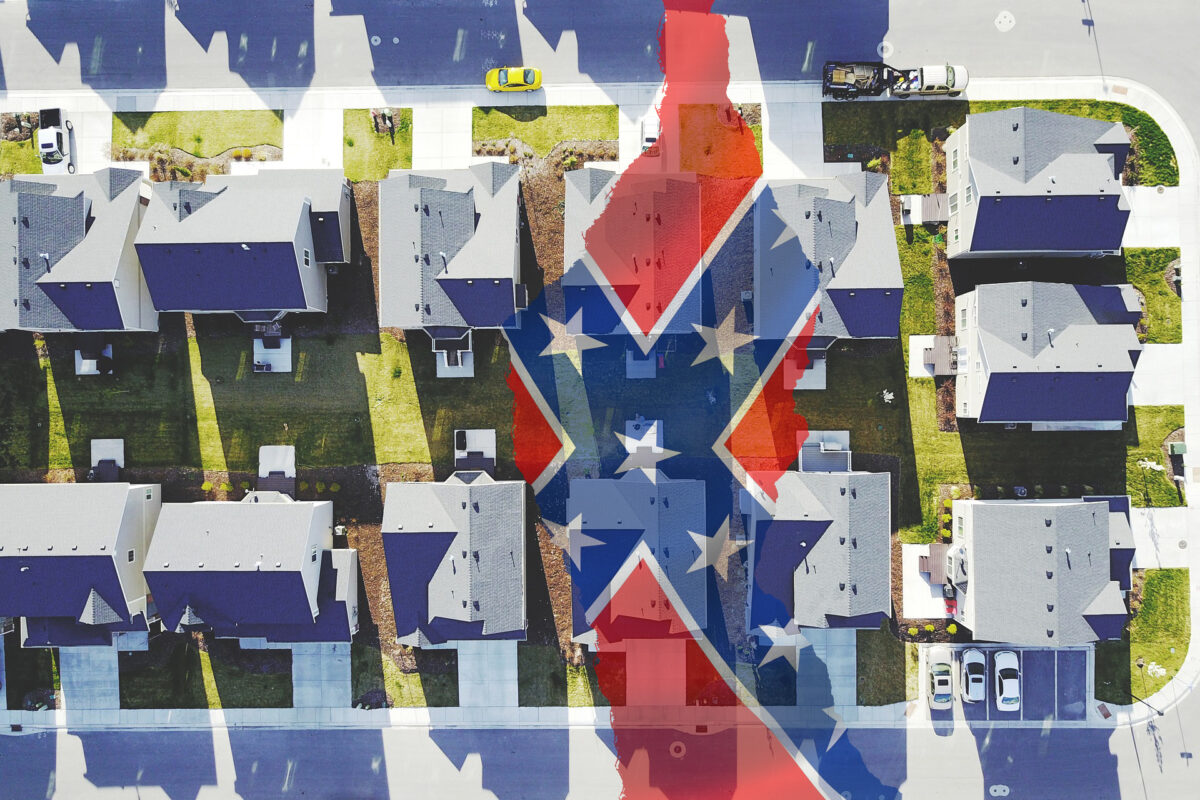 The first time I noticed the Confederate flag in my neighborhood, my daughter was watching a squirrel eat from a bird feeder hanging on a tree in a neighbor’s yard. We stopped on our walk to talk about squirrels and birds.

We talked about why the family who lived in the house would have a feeder. “They must love animals!” she said.

We also, of course, discussed why, much to my daughter’s dismay, we didn’t. “We have our hands full trying to care for the beings who live inside our house,” I explained.

And then, we rounded a large tree, and there it was: a Confederate flag. It was hanging in the garage, but the door was open so the “stars and bars” were there for everyone to see. My daughter, who was all of 8, immediately noticed. “That’s great,” my daughter deadpanned. “Save animals, kill people.”

Had I been drinking water, I would have done a spit-take. From prior conversations, I knew my daughter understood that the symbol represented hate, but I didn’t realize she had such a developed understanding of the consequences of that hostility.

After that, I couldn’t unsee the flag. Instead, I noticed it more and more. It seemed the people who lived in that house — which is on the main road in our community, the only way in or out — left their garage door open more than they closed it. They had placed camp chairs, the kind I took to my kids’ soccer matches, where the driveway met the garage. I often saw a woman — who was usually tending to the feeders or her plants, or talking on the phone in her chair — and less often I saw a man. But what I always saw was the flag, hanging from the ceiling, over a Harley-type motorcycle.

I considered stopping to talk to them, but I always felt too nervous. What could I say beyond expressing my displeasure? What could they say to allay my fears and disgust? When friends suggested the best way to handle it would be a face-to-face conversation, I resisted, fearing for my safety.

This wasn’t my first experience of overt racism in our neighborhood. My family had moved to Lancaster County, Pennsylvania in 2010, after a decade in New York City and three years in Los Angeles. I knew it would be a culture shock, but as with most things in life, I didn’t know what I didn’t know. After a childhood in Pittsburgh, and college just south of the Mason-Dixon line, I, as a white Jew, had been exposed to flashes of anti-Semitism — what I now know as microaggressions — and I certainly knew racism existed. But a lifetime in major metropolitan areas had led me to believe that, while things were not perfect, they were generally moving in the right direction in our nation.

Just a few months living in south-central Pennsylvania disabused me of that notion — and that was years before the current president’s divisive rhetoric took hold. The kind of bigotry I have experienced here is something a lot of my friends in larger, more diverse, more progressive cities simply don’t understand. I don’t think they can even comprehend it, and I don’t blame them — I wouldn’t have believed it myself before I got here. And yes, there are bigots in big cities, just like there are wonderful people in small towns. I know generalizations can be dangerous, but they’re not always wrong.

When we moved from our rental housing into the neighborhood we would come to call home, the movers were contracted to reassemble anything they had taken apart during the move. I had spent most of the day dealing with the young, clean-cut crew chief, but it was an older, grizzled man I found putting together my daughter’s crib in her room with the pinkish-purplish-pale-mauve walls. On his tricep was a fully visible dark blue-green swastika tattoo that was at least six inches in diameter; each cold, calculating, angular “arm” of the swastika at least an inch thick. I was stunned speechless, more shocked and confused than scared. He knew my name. He knew my daughter’s name. He knew where we lived and he was in her room constructing the crib where she would sleep and play and nap. She was 2.

The next day, when I talked to a friend in New York, she downplayed the incident, focusing on how swastikas have other meanings in other cultures that pre-date the Nazis and was at one time used in American biker circles divorced from a strict Nazi context. She is not wrong, and as a good friend, she may have just been trying to calm me down. But, looking back on that conversation, I’ve come to realize that her “big city” perspective did not take into consideration the place I was living. After 10 years in this community, I have no doubt what that swastika meant.

I live in a conservative part of the state. When I moved here, I did not expect to be in the majority — in a religious, political, or cultural sense — but in my mind we would all keep our beliefs to ourselves and get along. It was a naive view based on my own privilege in the places I had previously lived. What I found was an aggressively conservative Christian community that feared for my eternal soul — and they weren’t shy about telling me so. I also found racists and chauvinists and homophobes. Thankfully, I found “my people,” too. Many of whom are progressive Christians and activists who are happy to work and partner with a progressive Jew. And somewhere in the middle, I found people who had never spoken to a Jew or a feminist before, and they weren’t sure what to make of my beliefs or outspokenness.

Since moving here, I’ve gotten into many a fight on Facebook, and I’ve found myself in the middle of more than a few uncomfortable moments at parties. This is why, when I felt moved to post in our NextDoor neighborhood group about the Confederate flag, I had no doubt it would be a disaster — but I also couldn’t stay quiet any longer. In the wake of Breonna Taylor and George Floyd’s deaths, along with the deaths of countless other Black and Brown people, the world was finally rising up in protest and embracing the truth that Black Lives Matter, but I still walked past a Confederate flag every single day.

Although I expected a fight, I didn’t want one. So I chose to come at the issue a little sideways, as I have learned to do here, posting language that was far less inflammatory than my feelings. I posted an article about the proposed U.S. Naval base ban of the Confederate flag with the following note:

Now that the Marines and NASCAR have moved to ban [the Confederate] flag, and the Navy is looking to make the move as well, I wonder if we as neighbors should consider its place in our community. I understand free speech laws in the US and (conversely, but maybe applicably) I understand it is illegal to display a swastika in Germany. I hope everyone who flies this flag (or has it on their cars/trucks/clothes) in [our neighborhood] has a deep understanding of what the flag means to them personally and also what it communicates to their neighbors.

It was my attempt to encourage people to think about impact versus intent — without actually using those words, which can really set off people who use the term “social justice warrior” pejoratively. What followed truly surprised me: a short, tame, and respectful (if a bit misinformed) discussion of free speech rights and the idea of privilege.

But that’s not all: Within 10 days, the Confederate flag was removed from the open garage.

I have no idea if my post led to the removal. I’ll probably never know. But it felt like a small win. I sang it from the rooftops — or, more accurately, I posted on Facebook, where I had been chronicling my encounters, with the image: “THE EFFING CONFEDERATE FLAG IS GONE!”

It felt like a sea change, like maybe the Black Lives Matter protests that had been taking place daily in our small city since the murder of George Floyd had moved the needle; like maybe people in this community might be thinking differently, possibly for the first time ever; like maybe progress was coming to south-central Pennsylvania.

That’s until my husband rolled his eyes and said, “I’m sure they just moved it inside. It’s probably framed above their mantlepiece right now.”

And he might be right. When was the last time a post on social media really changed anyone’s beliefs? Probably never. But then I got a text from a local friend who told me that a house he drives by every day had removed their Confederate flag as well. (Though he noted their Trump 2020 flag was still flying high.)

Fewer proudly flown Confederate flags are certainly worth acknowledging — and celebrating — as are the smattering of Black Lives Matter signs that now dot my morning walk, but I can’t help thinking about the man who put my daughter’s crib together all those years ago. Had he just been wearing long sleeves, I would have never seen his tattoo.