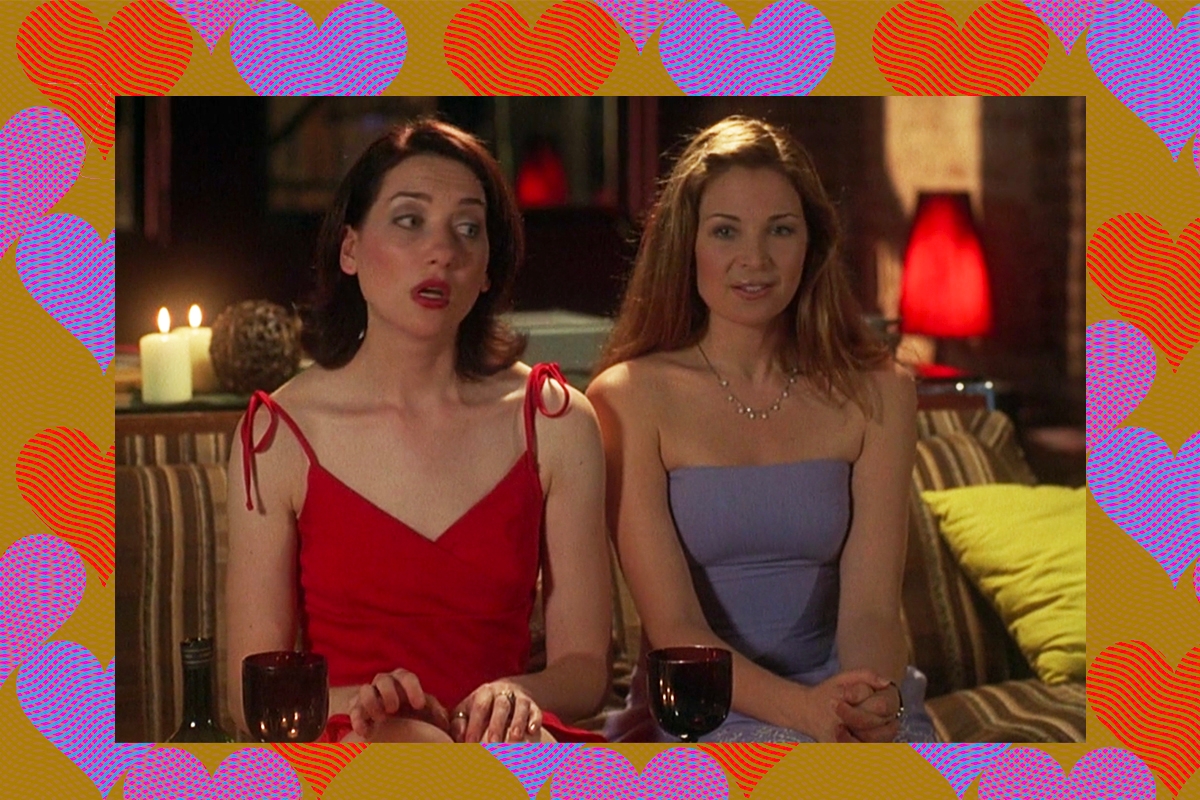 Never see Kissing Jessica Stein with someone named Christina. I learned this lesson the hard way in the spring of 2002. A friend-from-college and I were part of a two-person Sunday movie club in New York City, and that weekend we decided to check out a new romantic comedy that had been getting great reviews.

“What did you think?” I asked her as we filed out of the lobby.

“It was cute,” she responded, as if she were describing a drugstore teddy bear. “You?”

“I thought it was the most authentic portrayal of an urbane Jewish woman I’ve ever seen on a screen,” I enthused. “I felt for Jessica and her stress about being single at a certain age, when everyone around her is pairing off and having babies. I wanted to laugh and cry when her yenta of a mom told her in the opening scene that she was worried she’d be single forever. It’s not just a movie, it’s a miracle!”

OK, maybe I wasn’t quite so eloquent — it was a long time ago. I think it’s more likely that I just told Christina how much I enjoyed the movie, and then asked her where she wanted to grab coffee. But I do remember knowing in my bones that our usual post-movie banter was futile: Witty dating jokes aside, there was no way my friend, a small-town Missouri girl, could appreciate Kissing Jessica Stein’s wonderful Jewish nuances.

Christina moved to Denver a few months later and we never talked again. I’ve since seen the movie about 30 times, thanks to multiple cable and Netflix viewings, and have come to adore it even more. I turn to it not only as a movie-loving woman with a weakness for witty romantic comedies set in New York City, but as an anxious Jewish woman perpetually trying to understand myself and the world around me, and who depends on my religion to provide clarity. What’s the real definition of commitment? Should I live my life for myself or for my loved ones? How do I achieve real meaning in what I do? Kissing Jessica Stein, one of the most iconic Jewish films of the modern era, addresses many of these topics — and always makes me laugh along the way.

When we first meet Jessica (Jennifer Westfeldt), she is getting by as a bright, slightly cynical, and more than slightly neurotic 28-year-old newspaper copy editor. Her editor, Josh (Scott Cohen), just happens to be her ex and a family friend. Jessica feels stifled both by her job and her meh dating prospects. (Westfeldt’s then-boyfriend, a pre-Mad Men Jon Hamm, plays one potential suitor in an early dinner party scene.) When Jessica’s coworker, Joan (the hilarious Jackie Hoffman), flags a newspaper personal ad — ah, the pre-swipe left/swipe right days! — from a fellow Rainer Maria Rilke fan, her interest is piqued. But wait, the potential suitor is in the women seeking women section. Oh well. She can’t . . . can she?

Oh, but she can! Jessica takes a chance and goes on a date with a self-assured art gallery manager named Helen Cooper (Helen Juergensen). The night starts awkwardly — Jessica freaks out and tries to bail as soon as Helen shows up to the bar — but then the two end up walking and talking in one of those magical evenings that can only happen in downtown Manhattan. When Jessica declares that her life is so pat that she can predict exactly how she’ll react in any situation, Helen surprises her with a kiss on the lips. An exhilarated Jessica is smitten, and they soon start to round the bases. But Jessica must get over her hang-ups about becoming deeply intimate with a woman, both emotionally and physically. And though Jessica and Helen do move in together, Jessica doesn’t 100 percent get there. The romance doesn’t last. The friendship does.

Despite this, I can’t overstate how much Kissing Jessica Stein pioneered the gay rom-com. Sure, the LBGTQ community had been represented on the big screen many times by 2002, including Philadelphia (1993) and Boys Don’t Cry (1999). But those were Heavy Issue Movies. In & Out (1997) and The Birdcage (1996) were broad outrageous comedies. But Kissing Jessica Stein was a rarity: a fresh, smart, grounded and funny look at sex and the single girl. (This also happened to be the movie’s advertising tagline.) It’s since become a touchstone in the community; Hoffman recently told Entertainment Weekly that people still approach her about it.

The film is also very much a product of its time. Yes, Jessica is eventually emboldened enough to quit her dead-end job and pursue her passion for painting. (She even stops flat-ironing her hair!) But the movie ends with Jessica flirting with Josh in a bookstore, with the promise of more. If Kissing Jessica Stein were made in today’s more progressive times, Josh would be an afterthought. Jessica and Helen would have enjoyed a breezy brunch and then returned to their cozy apartment, all to the musical strains of a jazzy Nora Ephron-esque score.

Channeling the immortal words of Jerry Seinfeld, I’m going to pause here and say that I’m not gay — not that there’s anything wrong with that. But I remain amazed how Westfeldt and Juergensen — yes, the actresses also wrote Kissing Jessica Stein — somehow seemingly read my early-aughts diary and tapped into my psyche. It’s one thing to be a Carrie Bradshaw-type single girl in New York City; it’s another to be a Jessica Stein, whom Helen aptly describes as “the Jewish Sandra Dee.”

Like Jessica, I’ve always been a super-fussy self-analyzer. I’m also — sigh — a wholesome goody-goody. I’ve basically been programmed since birth to marry a Nice Jewish Boy, buy a house in the suburbs, and live happily ever after. But that’s never happened. I’m still single after uprooting from Michigan to NYC in the 1990s. And while I have several serious relationships in my history tab, my bad first-date experiences are worthy of their own movie montage. (For one blind date, a restaurant hostess apologized to me before taking me to my table.) But, just as Jessica ultimately shores up her self-confidence once she ventures outside her comfort zone, I, too, have come to realize that the right person for me is not what a preconceived GOP (Good on Paper) ideal. Here’s what really matters in a partner: Someone who’s as smart as me, makes me laugh, and gets me. Great sex helps, too. These descriptors, by the way, are exactly how Jessica describes Helen to Joan.

But should this person also be Jewish? Put it this way: I’ve always been fascinated that Jessica is way more apprehensive about telling her conservative family that the person she’s dating is a female; religion does not seem to be a factor. Keep in mind that the Steins hold regular Shabbat dinners and sing all the blessings in Hebrew. They go to Yom Kippur services. Judaism is clearly a source of pride to each family member — Jessica’s older brother, Danny, breaks the glass at his wedding to a Jewish girl — but it’s not the end-all, be-all in the romantic decision-making process.

I know for certain that my own ultra-traditional parents wouldn’t be so open-minded. Even as a teen, I was told matter-of-factly that non-Jewish guys were off-limits. I know they’re still terrified of me going rogue. For the record (sorry, Mom and Dad!), I have indeed occasionally dated outside my faith. But their approval aside, I actually prefer Jewish guys because I have more in common with them culturally and it’s one less thing to stress about. But watching the Steins in action, I do wish my parents were more like this ideal welcoming American Jewish Family.

A clear-eyed example: The special relationship between Jessica and her mom, played by the incomparable Tovah Feldshuh. Westfeldt was actually Feldshuh’s assistant years earlier, and their closeness is reflected on the screen. Whereas the matriarch could have easily been reduced to a pushy Jewish stereotype — fixing her daughter up on terrible blind dates, strong-arming her to Shabbat dinner —the veteran, Tony-nominated star imbues the character with warmth and empathy. In the key scene, Feldhshuh sits down next to a forlorn Jessica on a backyard swing and encourages her to stop being her worst enemy. Then, she tentatively-yet-tenderly tells her still-closeted daughter, “I think . . . she’s a very nice girl.” Turns out she knew about her relationship with Helen the whole time — because, duh, mothers always know.

Kissing Jessica Stein was made for less than $1 million and grossed a respectable $10 million. It received the Audience Award for Best Feature Film and a Critics’ Special Jury Award at the 2001 Los Angeles Film Festival. And while Westfeldt and Juergensen have yet to reach the same artistic or box-office heights, I hope they continue to feel immense satisfaction from their breakout film. After all, not only did they create a sparkling piece of pioneering rom-com art, they touched the hearts of a specific audience as choosy as the titular character herself.