When You Say Nothing at All About the Israeli-Palestinian Conflict 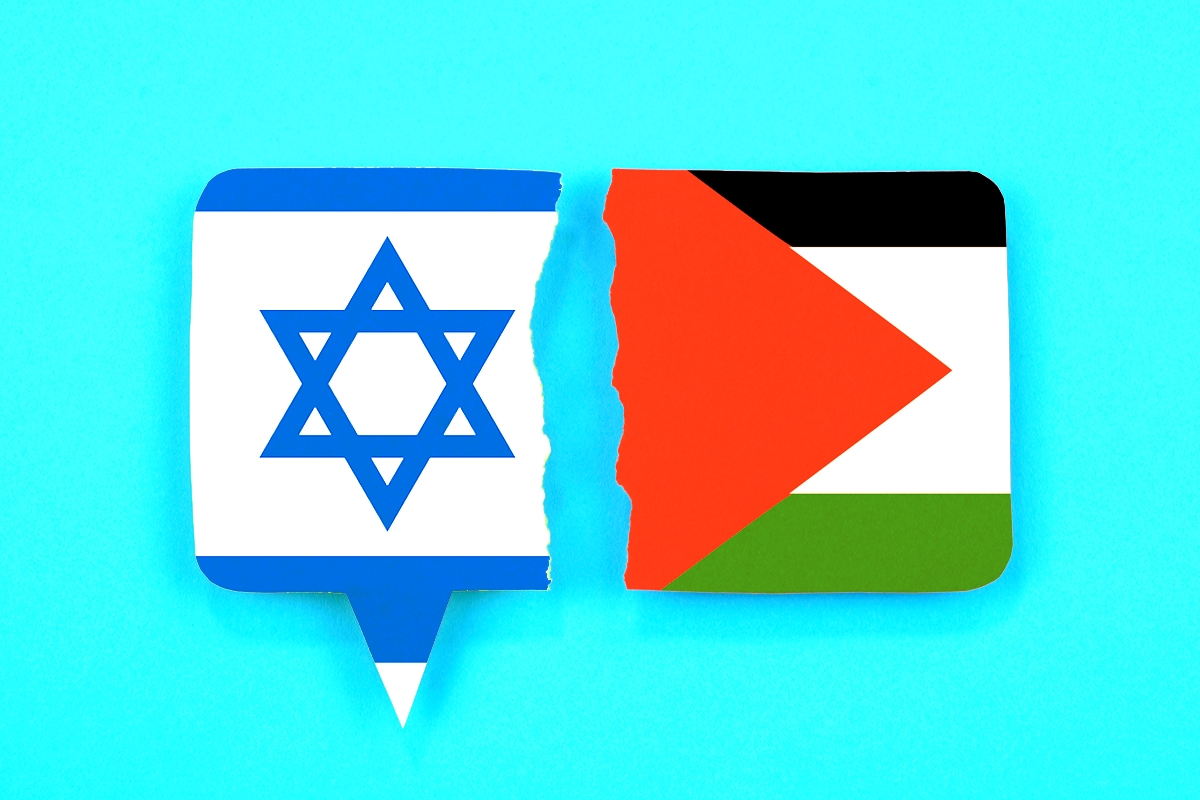 One of my favorite love songs is “When You Say Nothing At All,” a 1988 country ballad popularized by Keith Whitley, Allison Krauss, and, most importantly to me, a leather coat-clad Irish boy-band heartthrob named Ronan Keating, who recorded the song for the “Notting Hill” soundtrack. The lyrics extol the virtues of non-verbal communication, which means that it’s pretty much the perfect romantic ballad for anxious introverts like me.

As someone who often suffers from debilitating silence in real life, I dig how this song validates my natural predilection to, quite honestly, be too friggin’ terrified to say what’s on my mind in many interpersonal situations.

And yet, despite my general reticence, I’ve somehow always found the courage to write or say things about the Israeli-Palestinian conflict. Since I started working in Jewish media in 2014, I’ve witnessed what feels like countless escalations in this conflict, from knife attacks to rocket fires. It feels like I’ve written innumerable personal, long-winded responses to these situations, given the amount of angry comments and messages I’ve received. (In truth, it’s more like a small handful of pieces, which I don’t particularly care to revisit — I’m not sure I still agree with 2016 me, or even 2019 me).

But over the past 11 days, as terrible violence and destruction engulfs the land that I called home for the first two decades of my life, I’ve found myself staying uncharacteristically mum. In this absolutely horrific current conflict — which, after claiming more than 200 lives, ended (hopefully?) in a ceasefire today — I couldn’t even muster a 280-character tweet. As homes and buildings were destroyed by rocket fire in Gaza and Israel; as families in Gaza City huddled together in their homes because they didn’t have an Iron Dome, hoping to at least die together and not have to live with grief and loss; as families in Israel rushed to shelters and kids spent sleepless, traumatizing nights in their safe rooms, I tried, again and again, to type some sort of statement, to form my thoughts into a Facebook post or Tweet. But I couldn’t.

This might be because I’m 9 months pregnant, and, due to a pregnancy complication, I can’t comfort myself with carbs, my usual response to social media vitriol. Certainly, this feels like a valid excuse, but, really, it’s more than that. What’s making me reticent is that I’ve never seen such a public outpouring of opinions about Israel-Palestine, in the volume and magnitude that this particular escalation has spurred — and I can’t tell where, if at all, my voice could make a difference.

Since last summer, as protests swept the U.S. in support of the Black Lives Matter movement, there has been increased pressure to speak out against injustice in public ways. Although “speak” isn’t really the right word — it’s mostly sharing infographics and memes on social media. I can’t deny that, in the past, I’ve even shared some of these myself, and I do understand the draw to say something, to show that you care. There’s pressure, internal and external, especially for high profile accounts and individuals, to, as my colleague Emily Burack writes “plant a flag and say, this is where I stand.”

It’s been interesting to see this methodology translate into the Israeli-Palestinian conflict, mostly with the aid of quaint memes and image carousels that attempt to explain a struggle I’ve been grappling with for more than 30 years and still find too complex and confounding to distill succinctly. It’s been fascinating to see just how many people I know have been sharing information about Israel/Palestine on social media for the first time ever. I’m happy to see people care and be vocal about the suffering of Palestinian people, who are, yes, it’s true, disproportionately affected by this conflict.

But it’s also been incredibly toxic. Discourse about Israel/Palestine has always been extremely heated — especially when you have loved ones in the region, or you live there yourself. While a lot of these easily shareable snippets of information contain good kernels of knowledge, many of these memes and posts contain identifiable biases, misinformation, and anti-Jewish or anti-Arab sentiments. For activists in either camp, there seem to be clear delineations on what is and is not OK to say — and there’s a lot of policing about what is acceptable, what makes you an ally, and what doesn’t.

So, as I sit and draft my 100th unsent tweet, I get the distinct, deflating feeling that I just can’t win. I don’t want to win, either. Because no one wins when people die and hate foments.

On a couple of occasions in recent weeks, friends have reached out to me to ask how my family is. It’s been really touching. Because, despite the power imbalance, and despite the fact that statistically, my family will likely remain safe, despite the fact that the situation in Gaza is absolutely more terrifying and dire — my family is not OK. As most people experiencing trauma know, it is not relative. Watching a building down the street get demolished by missiles is traumatizing. Running to shelters as you feel the earth shake underneath you is trauma. I think about my brothers and my cousins who are experiencing this, and my heart really hurts for them.

It’s been hard for me to grapple with this — especially since I’m pregnant and hormonal and far away. But I’m lucky that my family and I are united in our anger: our anger at the events that have brought on this recent escalation; at the constant mistreatment of our Palestinian neighbors; and at right-wing Israelis who have furthered incitement against them. We are angry at a feckless government and at terror groups, who are using this situation for political gain without care for human life. We’re furious that antisemites are using this moment to further advance hate against Jews around the world — and angry at anyone who uses this moment to incite hatred against Muslims, too. We’re angry that too many children are dying and that angry that nobody seems to care about peace. We’re angry at our powerlessness.

True, not saying anything doesn’t help right now — but neither does releasing a forced or half-thought-out statement just for the sake of not being silent. Also, if 2020 has taught us anything, it’s that virtue signaling on social media doesn’t create systemic change — we have to go beyond that, and whatever effort we put into essential anti-racist work needs to be sustained. And now, as rockets stop flying between Israel and Gaza, we have to find ways to move beyond social media posts and keep doing the work.

If you’re like me, and you’ve been stewing on this situation for a lifetime, you may have ideas of what “going beyond that” means for you. For some, that could mean calling your representatives in Congress, asking them to put pressure on the Israeli and/or American government to enact the changes you think are necessary. For others, it could mean giving money to organizations that foster co-existence or offer humanitarian aid. And while it is perhaps not as reality-altering as these other actions try to be, it can mean reaching out to Palestinian and Israeli friends and asking them how they are, and having a talk about their pain and frustration and hopes. In personal conversations, I’ve been finding nuance and ways to maybe find a way to be closer to each other.

If you’re someone who is not as familiar with the situation, it may mean educating yourself. Luckily, there are great resources out there, like these helpful books (or audiobooks for those with mom brains like me).

Saying nothing at all — publicly, at least — is still something that I struggle with. And it’s OK if you are struggling with it, too. If there’s anything that being enmeshed in this political reality has taught me, is that there are no perfect choices in this messy political situation.