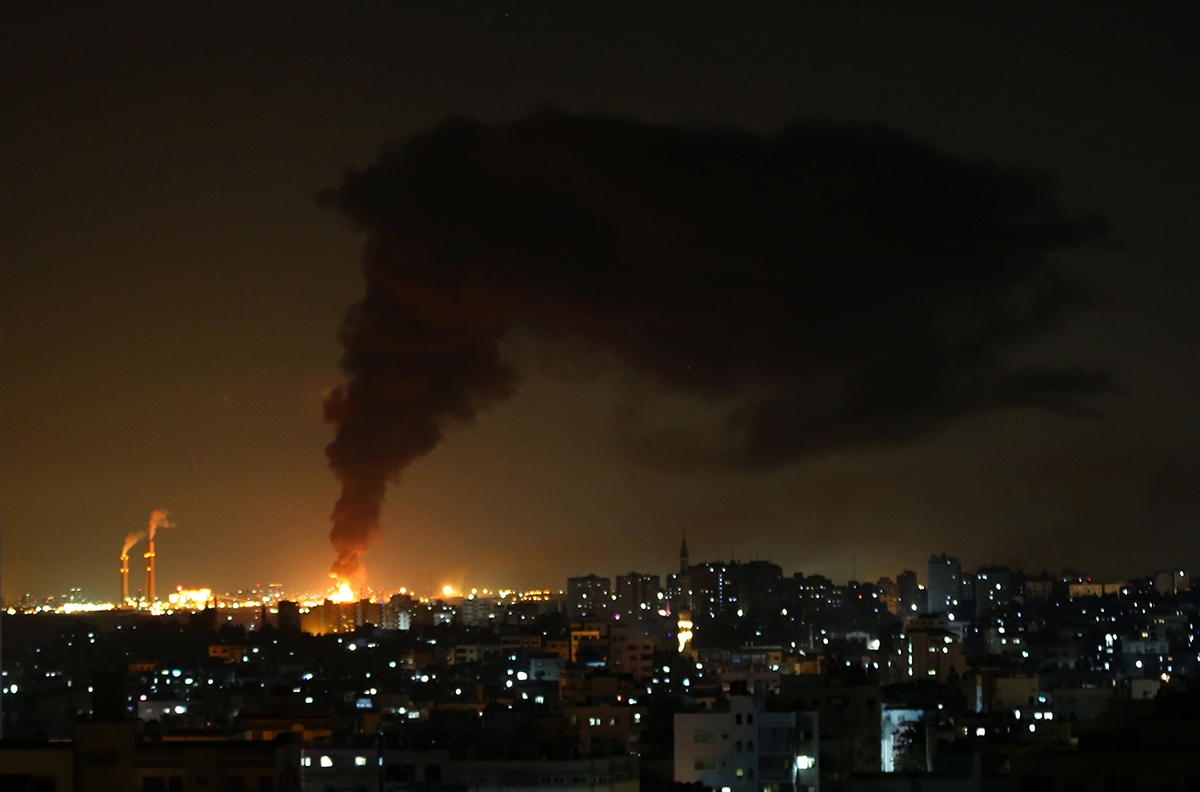 Last night was the second time that I hugged my children in a bomb shelter.

The first time was on November 12th, 2019. That day, I heard a siren indicating that rockets were en route to my new home in the city of Modiin, having just moved to Israel in 2018. I picked up my kids early from school and I brought them to a play date at a friend’s house. I wasn’t sure what the protocol or etiquette was for a situation like this.

We set our children up in the “mamad,” the safe room, to play games and watch Netflix. Mamads are a fixture in modern Israeli apartments; these well-fortified spaces have extra-thick walls and floors, airtight steel doors, and extra metal closures on the windows. When it’s not a time of unrest, such mamads often serve as an extra bedroom or an office. (Older buildings, by contrast, typically have communal bomb shelters, while still others have to make do with makeshift spaces like stairwells.)

Back then, my children had no idea of what was going on around them — they were too busy having fun. They did not hear the explosion of Iron Dome intercepting and destroying the incoming rockets. They were simply thrilled to have a day off school.

As for myself, I wasn’t sure how to feel or act, so I just played it cool. After a couple of hours,  I decided it was time to go home. I remember feeling terrified but I didn’t want my children to know. On the walk home, I noticed how life seemed pretty normal  — people were getting their hair and nails done, drinking coffee, and simply living. The contrast between what I saw and how I felt was stark, yet it was also comforting.

Last night was different. This time, my kids are older (second and fourth grades represent!) and were prepared. Just last week, there was a practice siren, a drill, for the entire city of Modiin, including at my kids’ school. It was hard not to be with them. The same way that I remember practicing fire drills with my former students when I was a teacher — or a shooter drill later in my career —  my children were preparing for the imminent threat of rockets being launched.

On the one hand, I was hopeful that the preparations would not be necessary, the same way you prepare for any type of unsafe situation and hope for the best. But today, in retrospect, I am very grateful to have been more prepared and for my kids to have been prepared, too.

As someone who grew up in the U.S., it feels very different to be in Israel as terrible news breaks, rather than watching it on TV or reading about it. It is different to actually hear the sirens warning us to seek shelter, the sound is terrible and multi-layered as we also hear the sirens of neighboring cities. It is different, and scary, to actually feel your home shaking throughout the night and morning, as Iron Dome did its best to intercept the hundreds of rockets.

My family moved to Israel for many reasons but this was not one of them. I do not want such violence to be the reality in Israel; I want peace. I want people to compromise and value each other. Simply put, I would love normalcy.

I appreciate how my children can practice Judaism here in Israel without being different from mainstream society. What’s more, we deliberately chose a neighborhood that embraced diversity in Jewish practice. While, as an American immigrant, there are random inconveniences to living in Israel —  incomprehensible bureaucracy, not speaking the language, and the absence of Amazon Prime —  ultimately, these are no big deal because they are just that: inconveniences.

I was very hopeful about the results of Israel’s most recent election — we almost landed a rather diverse government coalition. Things may be difficult now, on many fronts, but I am hopeful that we can move to calmer days soon, when everyone in the region can sleep through the night, put food on the table, and have the will, want, and ability to live in peace.

Last night, as it happens, my children stayed up past bedtime. Normally I’d find this frustrating, but last night I was grateful because they were still awake when the sirens began. I opened the door to the kids’ room, and fortunately they were already climbing out of their beds. Though the thoughts in my head were racing — where are the rockets targeting? How long will we be in the mamad? — I tried to appear calm.

Our city and our school had sent out advice on how to interact with your children when under attack: remain calm, focus on them, allow them to express themselves, and use physical affection to comfort them. They prepared us — and continue to provide support for — our physical and emotional well-being. At first, my kids were nervous that we were not quick enough getting to the mamad. (In Modiin, we are lucky in that we usually have approximately 90 seconds to get to shelter; some people in Israel’s south have 15 seconds or less.) Once the door to our mamad was fully shut — and the extra metal panels on our windows were closed — my younger son turned to me and said, “Mommy. My heart is beating so fast.” I followed the instructions that had been sent earlier: I made eye contact. I said, “Come let me hug you. Let me feel your heartbeat.” It worked — he quickly calmed down. Honestly, the interaction lasted less than a minute, but it was intense.

Together, we fooled around on my iPhone — I figured that was the easiest way for us to stay calm. Unfortunately, the internet didn’t really work —  we were hanging out in a bomb shelter, after all. Instead, we talked, and I hoped our chatter would drown out the sound of rockets exploding in the air. In my mind I was counting down the minutes, as we are advised to stay sheltered for at least 10 minutes once the sirens sound. These are the very same sirens that are amplified throughout the country to honor Holocaust survivors and vicitims on Yom HaShoah. It is the same siren we all hear a week after that for Yom HaZikaron, to remember the soldiers who have fallen for the state of Israel.

About 20 minutes later, the kids cuddled up on the twin bed inside the mamad and, for the second time that night, I tucked them in. My younger son looked relieved. “I didn’t want to have to worry about waking up,” he said. “I’m glad we are sleeping here.”

I was glad, too, because at 3 a.m. this morning, the sirens began again. I went to the mamad and hugged my boys; they asked if I could rub their backs. One fell asleep again almost immediately. Once again we could hear Iron Dome. I prayed silently that it would be successful, as the number and pace of rockets was unprecedented.

It’s now 8 a.m. in Israel as I type this. I am bleary-eyed and nervous, and I keep second guessing every noise I hear. Is that rumble of a garbage truck? Or is it Iron Dome? Is that a siren in a neighboring city? Or is it an ambulance or the noise of my kids watching TV?

There is no in-person school today. All Israeli schoolkids — despite the country having basically achieved herd immunity regarding Covid —  will be learning on Zoom. They will be discussing the situation as a class, and we will process that discussion afterwards as a family. In terms of what happens next, I don’t really know. But I am hoping for the best.