Your Favorite Jewish Celeb Was Probably on ‘Sesame Street’ 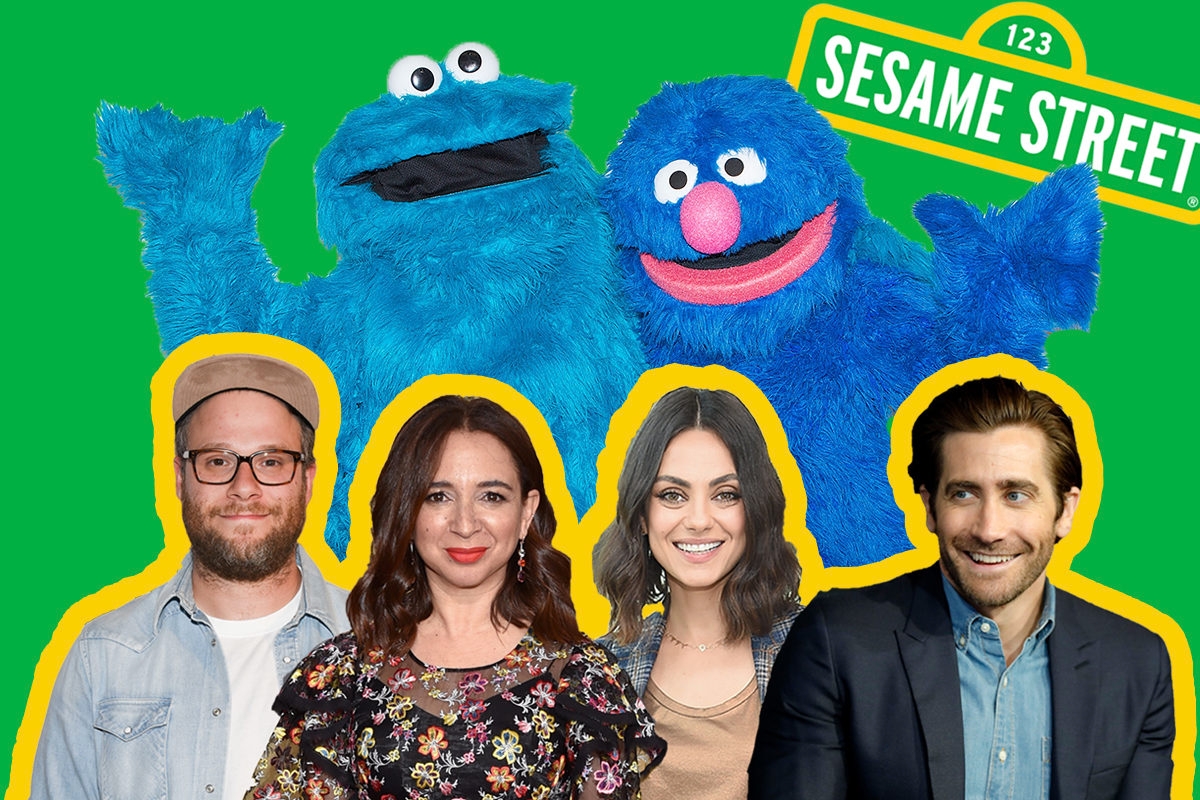 It’s been half a century since Sesame Street first aired in 1969. While some things have changed, the familiar faces of Big Bird, Grover, and the likes have remained the same incredible friendly faces many of us grew up with.

Ever evolving to reflect the constantly changing cultural landscape, Sesame Street has remained loyal to its mission to use television as an educational tool. Over the past 50 years, the longest running children’s show in American television history (!!) has expanded to reach families in 150 countries, in 70 different languages, because according to Sesame Workshop’s Chief Executive Officer Jeffrey D. Dunn, their mission to “help kids everywhere grow smarter, stronger, and kinder known no geographic boundaries.”

Over the past 50 years, Sesame Street has aired 4,500 episodes featuring hundreds of celebrity guests — including, of course, a lot of famous Jews. In honor of this major anniversary of this incredible series, we rounded up the most notable Jewish celebrity appearances.

Jewish dad — and Hanukkah blessing singer — Jack Black graced Sesame Street viewer’s screens back in 2008 during season 39 of the children’s show. Garbed in an elaborate chicken costume, the School of Rock star described the word “disguise” as part of the Word of the Day segment, and “octagon.”

Zach Braff, 44, is best known for starring in the sitcom Scrubs, but he also absolutely nailed explaining the word “anxious” to Telly Monster in season 45. Relatable content!

One of our favorite Jewish dads, Andy Cohen, was invited to guest star on Sesame Street in season 45 to explain the world “popular” with Elmo. With his celebrity status, that probably wasn’t too hard…

Jewish mom Rachel Dratch — she has a son, Eli, with husband John Washl — brought her comedic talents to the Sesame Street set in 2015 to guest star as a museum guard.

When Jewish actress Fran Drescher guest starred on Sesame Street in season 30, she didn’t act like herself — she acted like Fran Fine, her iconic role on The Nanny. In character, Drescher was asked to babysit Baby Natasha by her parents, Ingrid and Humphrey, so they could go to work. When they found out what a wonderful babysitter Fran Fine was, they ditched work to stay at home so she could be their babysitter, too.

America’s heartthrob Zac Efron appeared on the 43rd season of Sesame Street to explain “patience” to his pal Elmo. Hey, Zac! If you’re reading this, call me! I’ve been patiently waiting…

In 1990 Jewish actor and dad Jeff Goldblum joined Sesame Street not as himself, but as the character Minneapolis Johnson. In a quest a la Indiana Jones, Minneapolis searches for a golden cabbage.

Distinguished comedian Gilbert Gottfried, 64, appeared on the 39th season of Sesame Street as Denny the Distractor.

As part of the “Letter of the Month Club,” Jewish actor Seth Green guest starred on Sesame Street as Vinny, a delivery man. Adorably enough, the Buffy the Vampire Slayer actor’s cameo meant more to him than just a fun gig — the educational program was actually the first show he ever watched. “It was actually what made me want to be an actor,” Green said in a video interview with Sesame Street. “It looked like everybody was having so much fun.”

Jewish heartthrob Jake Gyllenhaal didn’t just guest star on Sesame Street, he also made an appearance on Shalom Sesame, the Israeli version of the show. On the former he used an octopus stuck on his head to explain the word “separate,” and on the latter he hid the afikomen.

If you haven’t noticed, we adore Jonah Hill and his whole family, and it seems like Sesame Street does, too. The Jewish actor appears on the show in 2008 wearing a fake mustache, and again in 2014 to define “empty” with Murray Monster.

The late Zero Mostel, the O.G. Tevye from Fiddler on the Roof, was one of the first Jewish celebrities to guest star on Sesame Street. In its sixth season, Mostel appeared in a handful of inserts for the children’s show, which were later adapted into the Sesame Street Book of Opposites.

The illustrious and late actress Madeline Kahn joins Mostel as one of the earlier Jewish guest stars on Sesame Street. In the 13th season, the Young Frankenstein star portrayed Madeline, a bird watcher, and just over a decade later she appeared as the Commissioner of Fun and Games.

This one is a wee bit meta. Talk show host Larry King had an unusual guest on the set of Larry King Live in 2004 — the letter “W.” King takes calls from listeners who call in to share words that start with “W” which quickly becomes a “Who’s on First” situation. Watch the video, you’ll see what we mean.

Kveller’s shabbat queen Mila Kunis graced the streets of Sesame for the show’s 42nd season. On the “Word on the Street” segment, the Jewish mom demonstrates the word “include” with Elmo and a couple of dancing sheep.

Best known for her role as Grace on Will & Grace, Jewish mom Debra Messing joined Sesame Street to define “nature.”

After guest starring on the children’s show in 2007 to demonstrate “sighing” and “pair” with Elmo, Sex and the City star Sarah Jessica Parker was invited back three years later for a scene that even adults would enjoy. To teach the word “big,” Parker says that she’s “looking for Big” — alluding, of course, to her TV character Carrie Bradshaw’s on-and-off relationship with Mr. Big.

Israeli-American violinist Itzhak Perlman appeared on Sesame Street in various episodes, most notably in season 12. The musician, who is disabled, demonstrated how people can be disabled in one area, like walking, but exceptional in others, like mastering instruments.

Here’s another Israeli-American star! Jewish mom Natalie Portman appeared on Sesame Street as a princess for its 35th season.

Jewish dad Paul Rudd (who starred in Knocked Up with Rogen), played Mr. Earth in the Sesame Street DVD Being Green. In the show’s 40th season, he also discussed the word “brilliant” with Grover and returned later in the same season as a prince (a very fitting role, if you ask us).

One of our favorite Jewish moms, Maya Rudolph, explained the word “brainstorm” with Elmo on the show’s 43rd season.

In 2011, Sesame Street snagged a super exclusive interview with Jewish dad and comedian (as well as “haiku lover” and “pancake visionary”) Andy Samberg. Watch it, it’s worth it.

Jewish mom Kyra Sedgwick appeared on Sesame Street in its 41st season as Camouflage Carla. In the episode, she teaches Elmo, Rosita, and Chris about camouflage!

For season 30 of Sesame Street, Jewish actor Ben Stiller does a reprise of the classic “These Are the People In Our Neighborhood” with Telly Monster.

In 2016 Jewish actress Tracee Ellis Ross, known for her role on Black-ish, got ready for bed with several Sesame Street characters by talking about the letter “B.”

Jewish singer Paul Simon brought his considerable musical talents to Sesame Street in its 8th season to sing a handful of songs, including “Me and Julio Down by the Schoolyard,” and “El Condor Pasa.”

In Season 22 of Sesame Street, Julie Kavner, AKA the Jewish actress who voices Marge Simpson on The Simpsons, sang the celebrity version of Grover’s song, “Monster in the Mirror.”

For Season 45 of Sesame Street, Jewish actress Emmy Rossum guest starred in a “Word of the Day” segment to explain the word “focus” with Abby Cadabby.

Jewish comedian and actress Ilana Glazer, best known for her iconic role on Broad City, joined the cast of Sesame Street in Season 48 as Ms. Noodle on the Elmo’s World segment of the show.