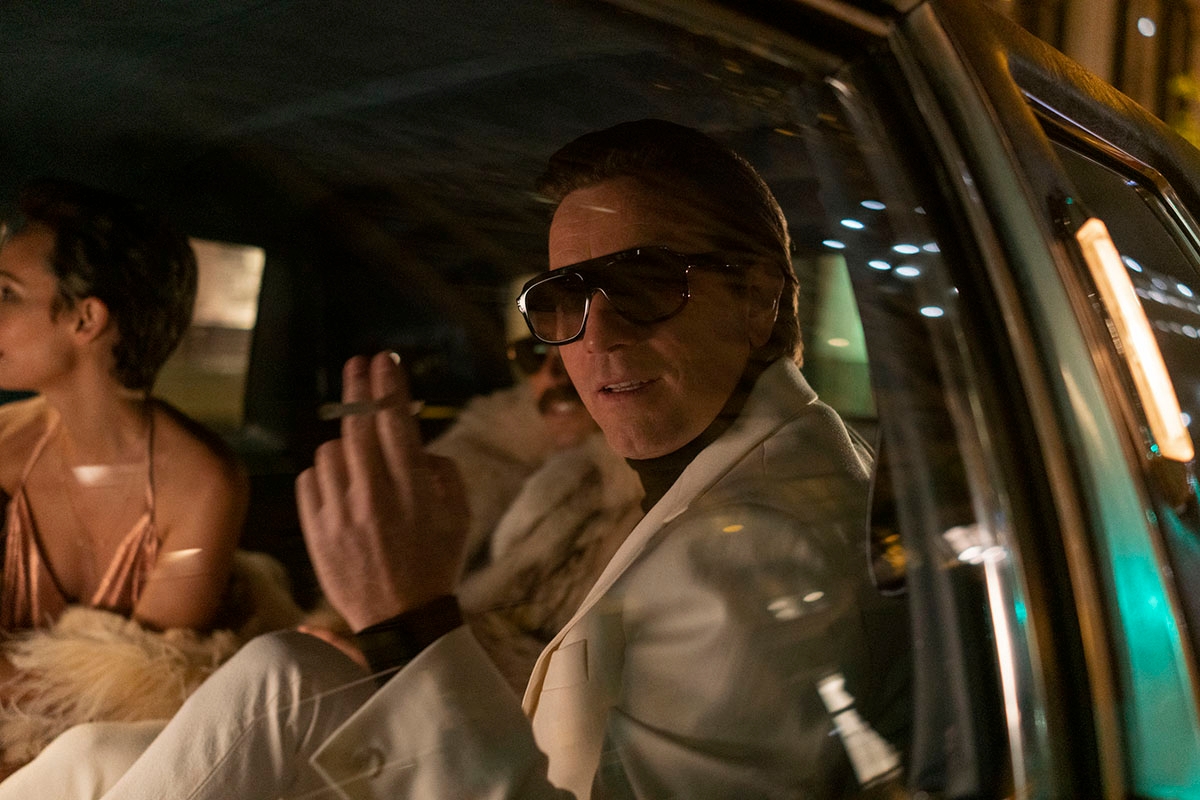 Have you watched “Halston”? If not, it’s time to put those kids to bed, log into Netflix, and prepare to be wowed by this glamorous new limited series. “Halston” is an oh-so fabulous, cocaine-fueled chronicle of the true(ish) story of the spectacular rise — and equally spectacular fall — of one of America’s greatest fashion designers.

Hunky Scottish actor Ewan McGregor stars as Halston, the uber-influential mononym who became a fashion legend in the 1960s and ‘70s before losing it all in the 1980s. McGregor so fully inhabits the role of this queer genius that, as biased as this megafan may be — and as problematic the decision to cast a straight man in a gay role may be — it’s impossible to take your eyes off him. (Try it, I dare you!)

In real life, Halston was a complicated man. He was born Roy Halston Frowick in Des Moines, Iowa, in 1923 and reinvented himself as Halston in New York in the 1960s. His talent as a hat designer, combined with his drive, “Midwestern good looks,” and impeccable style, soon catapulted him to a level of fame that rivaled his celebrity clients. “Halston” linearly, if clumsily, takes us through the designer’s incredible successes, fabulous friends and voracious sexual appetite to — much in the vein of VH1’s “Behind the Music” — his drug-fueled downfall and, ultimately, his death at age 57 from an AIDS-related cancer in 1990.

The highly bingeable series is chockablock full of talented actors depicting the IRL characters of Halston’s life, from his earliest backers, to the celebs that adored him (Liza Minelli was his BFF), to the, yes, (mostly) Jewish businessmen who tried to keep his business afloat. Eventually, through a series of bad personal and professional decisions, Halston was banished from his namesake company in the mid-1980s.

“He had a very wicked tongue and showed a cruel streak when he wanted to,” wrote Stephen Gaines in his 1991 biography “Simply Halston,” upon which the Netflix series is based. “He didn’t like Jews very much (or blacks or Puerto Ricans, but especially not Jews).” Which, yikes. Halston readily hired Black models, which was extremely rare at the time. But at various points in the book, Halston is quoted as calling Jews “kikes.”

Weirdly — or perhaps not surprisingly — Halston’s antisemitism is not overtly addressed in the series. It does include many of the Jews in his orbit, from the Jewish designers who were his competition to the Jewish fashion and business people who were Halston’s partners and/or adversaries along the way. Read on for 13 fascinating Jewish facts related to Halston, both the man and the miniseries.

1. Halston’s first brush with fame was as the in-house milliner at Bergdorf Goodman, the iconic New York City department store. (It was there that he designed the pillbox hat that Jackie Kennedy wore to her husband’s presidential inauguration in 1961.) Bergdorf’s humble origins date to 1899, when Edwin Goodman, a 23-year-old Jewish man, began to apprentice for a French tailor named Herman Bergdorf. By 1901, Goodman purchased a stake in the business, and Bergdorf Goodman was born.

2. As he sought to launch his own clothing line, one of Halston’s first collaborators was Joel Schumacher, a window dresser who later became a famous film director (“St. Elmo’s Fire,” “The Lost Boys,” “Batman Forever”). Schumacher grew up in New York; his mother was a Swedish Jew. Early in the series, we’re treated to a touching scene of Halston urging Joel (played by Rory Culkin, brother of “Home Alone” star Macaulay): “If you want to keep working for me, you have to get clean.” Ah, the irony.

3. Real-life model, muse and jewelry designer Elsa Peretti is played in the series by Jewish actress Rebecca Dayan. Dayan grew up in the South of France; her father is Jewish. Here’s one really cool thing about her: She’s super passionate about maternal mortality rates in the U.S., and has produced a documentary on the topic. We can’t wait to learn more!

4. Ewan McGregor is not Jewish (sob). However, he made his directorial debut in 2016 with “American Pastoral,” an adaptation of the Pulitzer Prize-winning novel by seminal Jewish writer Philip Roth. What’s more, McGregor starred as Seymour Levov — a handsome, “goyish” looking Jewish athlete turned successful businessman known as the Swede.

5. McGregor is also the father of Jewish kids! He and his ex-wife, French Jewish production designer Eve Mavrakis, share four daughters: Clara, Esther, Jamyan and Anouk. “My children are Jewish and we brought them up as such,” he told JTA in 2016. “It is sort of the only religious experience I’ve ever had.” The three oldest have all been bat mitzvahed.

6. OK, back to reality: As Halston’s reputation as a designer grew, he created clothes for the brightest stars of the era. Among his most famous regulars was Elizabeth Taylor, who famously converted to Judaism in 1959 before her marriage to Eddie Fisher (yep, Carrie Fisher’s dad).

7. A major plot point in “Halston” is when the designer sold his line to Norton Simon, Inc. and made bank. This IRL company is named for its Jewish founder, Norton Winfred Simon, who was one of the wealthiest people in the U.S. at one time. Simon was born in Portland, Oregon, in 1907. He started in sheet metal and eventually acquired a host of businesses, including McCall’s Publishing, Max Factor and Avis. Simon was also a world-renowned art collector; the Norton Simon Museum in Pasadena, California, still bears his name today.

8. Halston’s nights were spent in revelry at Studio 54, the legendary nightclub that was opened by two Jews — Steve Rubell and Ian Schrager — in 1977. The pair first met at Syracuse University, where they were brothers in the Jewish fraternity Sigma Alpha Mu. Considering how era-defining Studio 54 was, you may be surprised to learn it only operated for 33 months; Rubell and Schrager went to prison for tax evasion in 1980.

9. In the series, a hot new designer is presented as Halston’s enemy number one: Jewish designer Calvin Klein. Klein was born and raised by Jewish parents in the Bronx and was a pioneer in the designer jeans market. (At one point in “Halston,” Halston is pushed over the edge when he watches the brand’s iconic commercial with Brooke Shields.) The show also makes mention of another rival, one of Klein’s contemporaries: Jewish designer Ralph Lauren, who was born Ralph Lifshitz in the Bronx.

10. In 1983, Esmark purchased Halston’s parent company, Norton Simon, for a cool $900 million. In the process, Carl Epstein, an executive at Playtex who grew up in Borough Park, Brooklyn, became managing director of the Halston brand. Though Halston and Epstein reportedly hit it off at first, Epstein grew increasingly distressed with the designer’s lavish spending and lack of work ethic. As depicted in “Halston,” Epstein tried and failed to get Halston to go to rehab.

11. As the situation with Esmark deteriorated, Halston hired a lawyer, Malcolm Lewin, known as Nick. As one Playtex exec told Gaines, “Halston hired Lewin because he was tough and because he was Jewish, and Halston thought he’d get one of their own to go ‘sic ‘em.’” Eventually, the relations between Halson and Epstein grew so tense that Halston reportedly threw around antisemitic epithets; Lewin stood up to the designer, telling him, “That word is not in my vocabulary.”

12. After Halston’s ouster, the label continued to change hands several times. By the end of 1986, it was owned by Revlon, whose new CEO, after a bitter takeover battle, was observant Jewish businessmanRon Perelman.

13. Following Halston’s death in 1990, the label continued to change hands (sigh). Among the many Jewish fashion mavens and businesspeople who were involved with the Halston brand over the years are stylist Rachel Zoe; actress, mah jongg player and shoe designer Sarah Jessica Parker; and former Miramax exec and persona non-grata Harvey Weinstein.

#FBF to feeling my best #summer self lounging in a vintage #Halston #2008 ☀️ 😎 pic.twitter.com/INNAIUa7G3