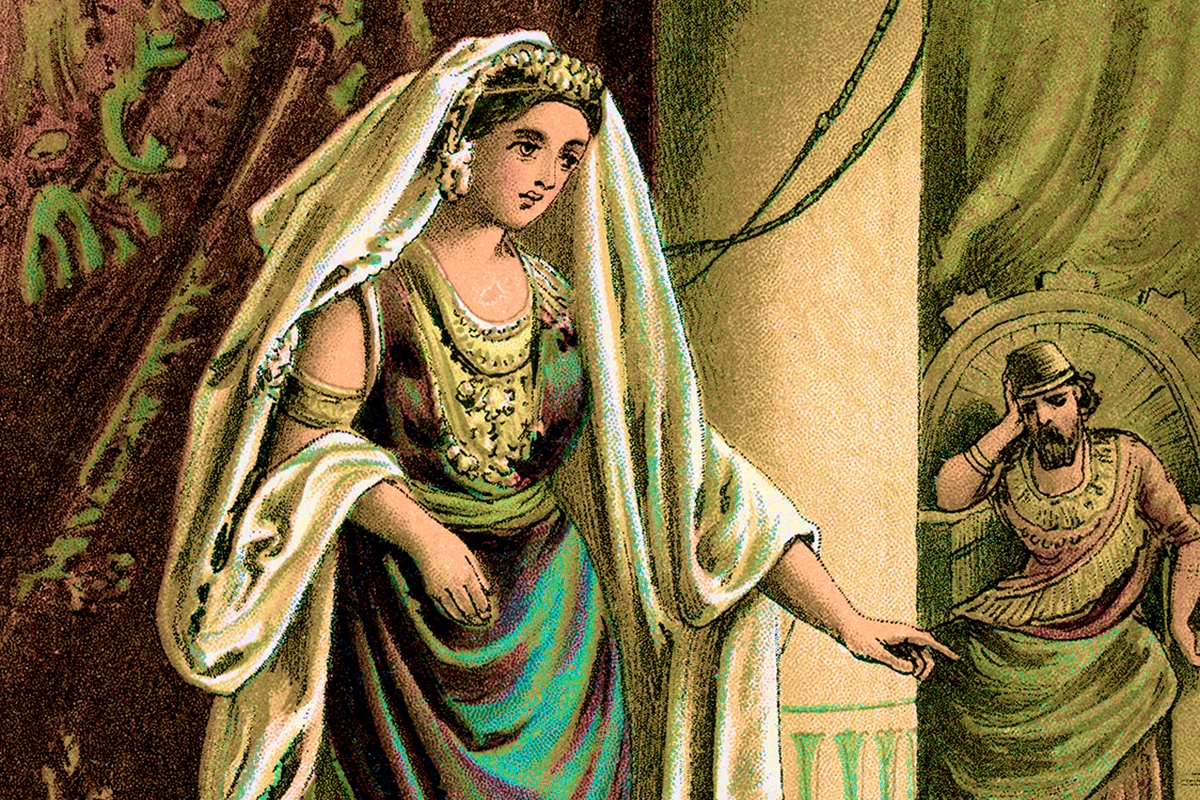 Confession: I used to have a hard time relating to Queen Esther as a heroine. As a kid, I dressed up as her on Purim, just like many girls my age did. But as I got old enough to actually read her story, I wondered why we would encourage girls to emulate her.

Here’s a quick refresher on how her story goes: The villain Haman convinces King Achashverosh to decree that all the Jews in his empire will be killed on a particular date. Now, King Achashverosh does not know that his new bride, Esther, is Jewish, and her cousin, Mordechai, tells her to go plead with him on behalf of their people. She tells him going to the king without an invitation means almost certain death, and apparently refuses to go.

Mordechai gives her a scathing response: “Don’t think you’ll be safe in the palace!” he scolds. “If you remain silent at this time, salvation will come for the Jews from somewhere else — but you and your father’s house will be lost.” It’s only after that kick in the pants that Esther agrees to risk her life by going to the king.

For years, I wondered: Why do we celebrate someone who was too chicken to do anything to help her people — even though she was obviously in the ideal position to appeal to the king — until her cousin yelled at her? Would she really have left them all to be killed if she’d known she would be safe?

However, as more years passed, and I had the opportunity to really pay attention to Esther’s story, I began to realize that there were a lot of nuances that I overlooked. (It’s pretty wild how maturity plus a bit of text study can sometimes open your eyes!) Turns out, there’s a lot to love about Esther — here are seven reasons why.

1. A shining personality is more important than good looks.

Most of us grew up learning that Queen Esther was beautiful. But the Talmud records a dispute about Esther’s appearance: The Bible says in one verse that she was beautiful (2:7), but there’s another verse that some scholars think implies she wasn’t (Talmud Megillah 13a). How can the two be reconciled? One approach suggests that her character was so refined that it gave her the impression of beauty. As the story goes on, it’s pretty clear that everyone — from servants to the king himself — saw something special in her.

Seen in this light, Esther reminds us that everyone can be beautiful. We don’t need to get so caught up in whether our faces or bodies match some societal definition of attractiveness. Inner beauty really can create outer beauty — and it’s a lot less expensive, and more deeply rewarding, to work on improving the inner than the outer.

2. She respected her (adoptive) parent.

As a parent, I can’t help noting this one! Mordechai wasn’t only Esther’s cousin; he had raised her since her parents died, and the text tells us more than once that she did whatever he told her. Which, to a parent, definitely sounds like a positive role model! After all, wouldn’t it be great if all kids listened to their parents?

Except — you can have too much of a good thing. As I’ve gotten to know Esther a little better, it seems like her obedience was at the root of what bugged me about her for so long. She continued to listen to Mordechai even as an adult, even after she’d been chosen as the queen of an empire, “like when he was raising her” (2:20). Is it any wonder that when faced with the idea of breaking the rules and going to the king uninvited, she couldn’t handle the idea? She’d been following rules all her life! I’m a big rule-follower, but the whole enterprise of growing up seems pretty centered on learning to think for oneself, making decisions, and taking responsibility. Esther had apparently never done that.

Which is why the next bit really is heroic.

3. She quickly began to think for herself, and took initiative.

Instead of harping on her initial resistance — which bugged me royally when I was younger — what I now focus on and find totally incredible and heroic is that, in an instant, Esther grew up. She made a total 180-degree turn and instead of blindly obeying Mordechai, she told him what to do: “Go and gather all the Jews in Shushan and fast for me…” (4:16). She came up with a plan and initiated it. And this time, Mordechai listened to her: “And he did all that Esther had commanded him.”

4. Strategic thinking for the win!

Not only did Esther suddenly flip her personality from a passive follower to an active leader, she got smart about it. Instead of marching into the throne room and demanding the king repeal the decree to kill the Jews, she invited him and the nefarious Haman to a party, and then another party, before revealing what was on her mind. The Talmud (Megillah 15b) lists a whole stream of psychological, political, and religious explanations for her approach, including: preventing Haman from recruiting allies to fight the king (keep your friends close, and your enemies closer!); hiding her enmity towards Haman so the Jews wouldn’t become overconfident and neglect their prayers; and even letting the king suspect too much friendship ( i.e. an affair) between Esther and Haman, on the theory that he would then kill them both out of jealousy, a price Esther was willing to pay to save her people. stop Haman. That’s a lot of strategy for one person who only recently started thinking for herself.

5. She united her people.

That three-day fast Esther told Mordechai to declare? Sounds like a solid religious strategy in order to get on God’s good side, right? Well, if you read the story closely, she doesn’t make any mention of prayer. The key verb is that she tells her cousin to ”gather all the Jews.” So he does, and Esther fasts along with them — building a sense of unity that will give her the strength to risk her life on behalf of her people. “And with this”— this unity — “I will go to the king, and if I’m lost, I’m lost.”

There’s tremendous power in Jewish unity, and Esther both inspired it and grew from it.

6. She took action — even if she lacked confidence.

The more times I read this story, the more striking I find Mordechai’s approach to convincing Esther to act. He didn’t say, “Oh, Esther, you’ll be fine; the king loves you and is not going to kill you just for showing up!” Here’s what he did say: “If you remain silent, the Jews will still be saved by some other means… Who knows whether it was for this moment that you came into royalty?”

That’s not much of a pep talk, when you think about it, but it worked. It worked because she embraced that uncertainty: “I’ll go to the king… and if I’m lost, I’m lost.” Esther didn’t suddenly stop being scared, and she wasn’t at all sure she would succeed or even live. But she did it anyway. That’s a role model that all of us who sometimes lack confidence — in other words, all of us — need.

7. She made sure her legacy would endure.

How did the Purim story get to be part of the Bible? How did celebrating it become an annual religious requirement? The Talmud tells us both of those things were because of Esther: The leading sages weren’t sure it was OK to add this new book to the biblical canon or to establish Purim as a holiday, but Esther persevered – and on her initiative, they persevered, eventually concluding in favor of both the book and the holiday.