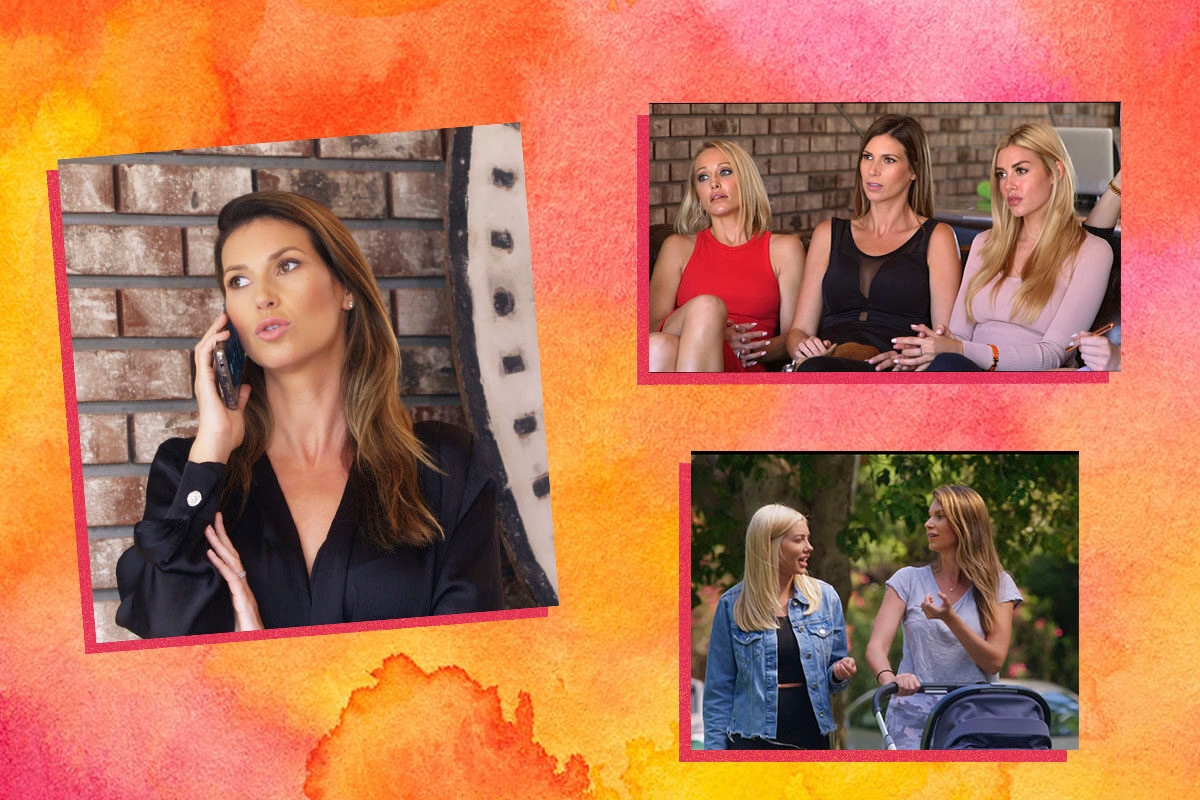 Like just about everyone, I’ve watched more TV in the past six months than I have in quite a while. And, despite my usual aversion to reality TV, something about Netflix’s Selling Sunset really drew me in. The show is about the glitzy life and careers of real estate agents at the Oppenheim Group, a real estate brokerage that caters to ostentatiously wealthy Los Angelenos.

Along with the agency’s owners — who are identical twins — the show focuses on seven women who call themselves a “work family.” Outside the office, they spend a lot of time together, engaging in both petty and significant interpersonal conflicts. It’s kinda like Real Housewives, but all the characters have the same high-pressure job.

Selling Sunset’s main characters are all complex — a few of them had rough childhoods before becoming rich and famous — but very few are portrayed as fully likable. Even so, one Selling Sunset cast member I genuinely like is Maya Vander, 37, who also happens to be a badass Jewish mom.

Maya is an Israeli and a powerhouse real estate agent. Over the course of the show’s three seasons, we watch her navigate her personal and professional life: She sells multi-million dollar houses with impeccable negotiation skills and she maintains a long-distance marriage with her husband, who lives in Miami. But that’s not all. She also gives birth to two babies in two years: Aiden, who was born in April 2019, and Elle Madison, who was born in May.

Maya is private about her husband’s identity, other than sharing on the show that he works in finance. Still, she loves posting pics on Instagram with her family:

6 years ago i walked into a bar in Santa Monica and gave this guy my business card….now he is stuck with a crazy Israeli wife 😜 Photo 📷 @alanphillip . . . . . . . . . . #anniversary #time #kids #family #familyfirst #netflix #boom #realestate #sellingsunset #season3 #mom #wife #work

Over the course of the series, Maya establishes herself as her company’s go-to de-escalator. For example, during the first season’s infamous pool party finale, Maya comforts Chrishell after Christine had bullied her to tears. Maya listens — without judgment — and helps prepare Chrishell to rejoin the group and stand her ground.

Though other characters have been called “two-faced” or even a “f***ing idiot” (by Christine, of course)  I’m not alone in my positive feelings about Maya —  the critics love her, too. Marie Claire, for one, calls her a “universal favorite,” and this article by Junkee names Maya as the “least evil” in the show and calls her a “brunette Gwyneth Paltrow.” (I see it!)

Trying to balance work/kids/show is definitely not the easiest 😅 and neither standing on one leg. Miss teaching Pilates, another passion i have which am trying to fit back in my schedule. How do you guys balance ? . . . . . . . . . #lifestyle #passion #pilates #workout #goals #realestate #mom #workout #balance #sellingsunset #september #netflix

Maya’s considerable chutzpah is always on display, starting from the very first episode, when she shuts down a creepy client who wants to date her rather than view properties. Despite his use of Hebrew to thank her for showing him around, she makes it clear that she is married and she knows what he’s up to. She also takes no shit from her boundaryless male bosses, eventually earning a co-listing with Brett Oppenheim, the brokerage’s co-founder — even after his tasteless “joke” about serving wine at an office party as a “way to see who is pregnant.”

While most of Selling Sunset’s main characters don’t need much instigation to start a conflict, Maya knows when to let some petty things pass slide. For example, she ignores a slew of xenophobic comments from her colleagues about her Israeli accent, from Heather’s inability to understand her pronunciation of “epidural” to Chrishell’s passive-aggressive comment about how she “loves” the way Maya botches American phrases, like “run for your hills” rather than “run for the hills.” Honestly, Maya is too busy making bank to give this kind of bullying the time of day.

What’s more, Maya gives birth to her two children during the course of the first two seasons, and she’s refreshingly transparent about her ambivalence about work-family balance — as well as her complicated history with pregnancy. In the middle of season 1, Maya takes a pregnancy test. She tells the audience, “I think right now I’m in that time and place which I don’t want to put work always first and I want to expand my family with my husband.”

“I want to have it positive but I’m just so paranoid and so cautious about it after two miscarriages,” she continues. “I’m just worried it’s gonna happen again, it’s just out of my control.” (Maya later shares that she had an oophorectomy, making her even more worried: “Now I’m like 36 with one ovary,” she says.)

Perhaps my favorite Maya line of all is when she admits that it’s impossible to find a perfect balance between her personal and professional life. “I just want to be perfect in every aspect of my life: being a good wife, being a good real estate agent to my clients, and obviously being a good, perfect mom,” she says in season 1, episode 5. “And, I think, you cannot have it perfect. Something has to give at some point. I just don’t know what. I can’t be available for my clients all the time once I have a newborn.”

We meet Maya’s first baby, Aiden, in the first episode of Season 2. She reflects that she had “a very long night at the hospital with a painful delivery,” noting that eventually the birth ended in a vacuum extraction.

One of her most relatable moments is when she brings baby Aiden to a house-showing making a joke about carrying her stroller up the stairs is going to give her a “herniated disc.” (Yep, it happens!) When Chrishell asks her to see the backyard of the home, Maya puts Aiden down for a nap in his stroller and quips, “The 20 minutes that I can actually do things, he is sleeping.”

While Maya’s Jewish identity isn’t addressed in Selling Sunset, it is certainly a part of her Instagram. In a recent post, she implies her love for Shabbat by reflecting, “Although I usually work on weekends, there is something about Friday that makes me happy, maybe it’s just how I grew up and the culture that no matter what, it’s ok to slow down after 3 pm🤗 and welcome the weekend 🙌” We love friday nights!

Friday is my favorite day of the week. Although I usually work on weekends, there is something about Friday that makes me happy, maybe it's just how I grew up and the culture that no matter what, it's ok to slow down after 3 pm🤗and welcome the weekend 🙌 . . . . . #fridaynight #friday #weekend #love #family #saturday #weekendvibes #home #cooking #netflix #sellingsunset #mom

Unfortunately, as Maya herself admits, her stable personal life and tendency toward “trying to resolve issues between the co-stars” led to a loss of screen time in season 3. She tells Fubar Radio, “I don’t know if they even want me if they do season four because I don’t provide the drama!”

Well, I certainly hope that Maya stays on the show — for the good of the other employees of The Oppenheim Group, for one, as well as for the good of all of us. Representation matters — and in this case, I mean not just representation of a badass Israeli Jewish woman, but also of a clear-headed person who can work in an intense industry and not get caught up in the drama. Yasher koach, Maya. I can’t wait to see what happens next season!