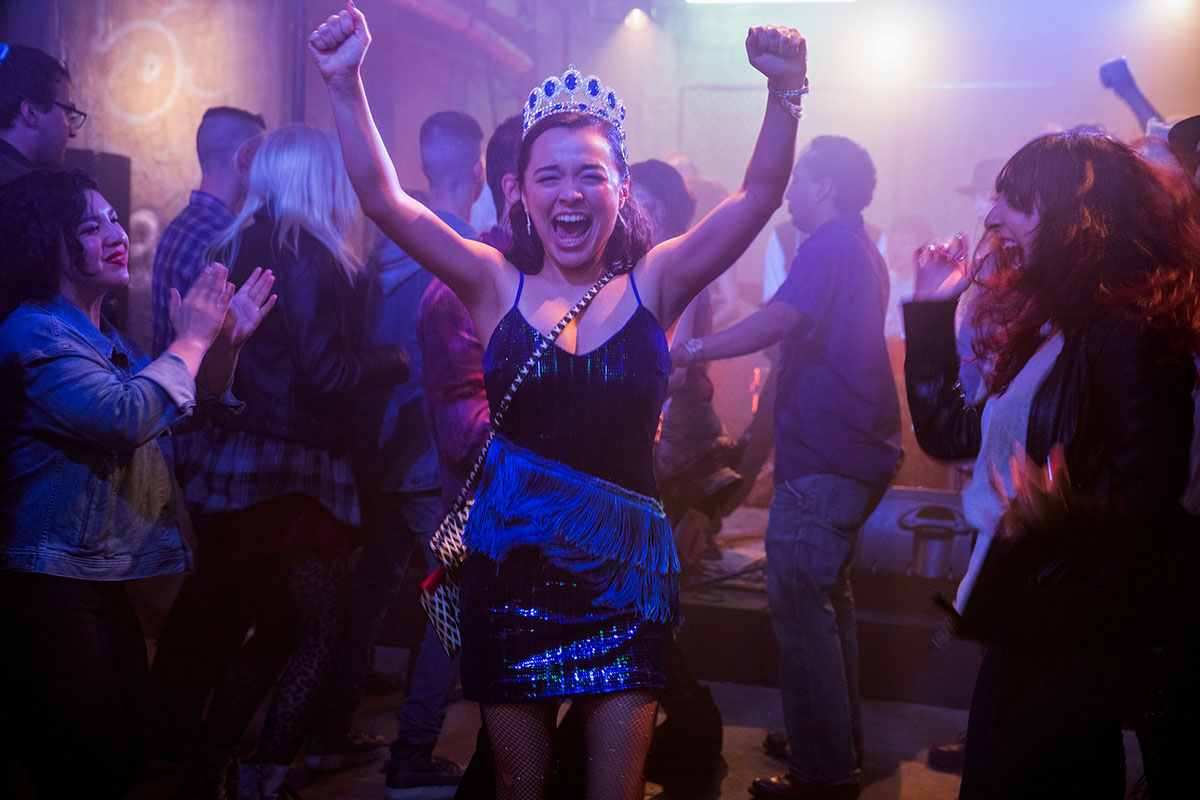 Dash & Lily is the newest Netflix series you and your older kids should be watching.

This teenage opposites-attract rom-com opens with Dash (Austin Abrams), a cynical high school student, who finds a mysterious red notebook at iconic New York City bookseller, The Strand. Inside, he finds clues to decode a message from a stranger named Lily (Midori Francis), a cheerful dreamer. Intrigued, Dash figures out the message and leaves Lily one in response.

As you might expect, this back-and-forth turns into an elaborate game. Leaving the notebook for each other in locations throughout NYC in December, they challenge one another to seasonal dares like stealing a cap from Macy’s Santa Claus and going to Dyker Heights to check out the ridiculous Christmas lights.

Yes, Dash & Lily is explicitly a Christmas show. So why are we recommending this show here at Kveller? Because you’re not likely to find a more Jewish new series this holiday season.

The series is based on the YA book Dash & Lily’s Book of Dares, written by David Levithan and Rachel Cohn. The authors’ Jewish backgrounds could be why Dash & Lily, despite all the Christmassy stuff, feels so Jewish, from the appreciation of food to the spot-on attitudes of the Jewish supporting characters in a klezmer punk band.

There are many reasons to watch the series in its entirety. The cast is excellent, and it’s so entertaining and joyous that it’s the perfect escape right now. Plus, since it is only eight half-hour episodes long, it’s a fast binge (or you could watch one episode a night during Hanukkah).

But the Dash & Lily’s third episode, “Hanukkah,” is what made us fall in love with the show.

Yes, the titular characters celebrate Christmas (although Dash hates it and Lily loves it), but in the Hanukkah episode, Dash challenges Lily to go to a Jewish punk show at 2 a.m. on the seventh night of Hanukkah. True, the episode isn’t so much about the holiday itself — there’s no heartwarming scene of a family gathered ‘round the menorah. Rather, it’s more about the spirit of Hanukkah, and being Jewish in general. Here are six things that Dash & Lily gets right about Judaism.

We love a good pun…

The punk band that Dash and Lily go see is called Challah Back Boys. To that, we say, “challah!”

… Almost as much as we love food.

The poster for the underground concert doesn’t have an address. The only clue is a picture of a challah that would-be partygoers need to find at a secret location. Lily locates it at the original Yonah Schimmel’s Knish Bakery on Manhattan’s Lower East Side. This iconic establishment has been in business since 1910! We don’t know if they actually host secret punk shows in their basement, but it’s an authentically Jewish location that feels right.

We never forget our pain, even when we celebrate.

When Lily arrives at the door, a Jewish drag queen asks her, “What’s your drag, bubeleh? What’s bringing you down on this fine evening?” At first, Lily says that she’s alone for Christmas because her parents are in Fiji, but the drag queen says, “Give me some pain. I need a real drag.”

True, we Jews can be known for our kvetching —  but this goes deeper than that. There is suffering in all our stories. And Lily may not have experienced the greatest tragedy ever, but when she says she’s 17 and never been kissed, it’s sad enough to get her in.

During the concert, Challah Back Boys lead singer Dov (Nick Blaemire) gives the rowdy audience a Hanukkah primer, “in case you slept through Hebrew school.” He explains that a band of Jewish rebels were driven from their temple, but that they took it back and then partied for eight straight nights. Yes, this may be an oversimplification of the Hanukkah story, but it’s still accurate! He then says, “And that’s the spirit of Hanukkah. Rising up against your oppressors. Not letting other people define you. What’s more punk than that?” So true.

He then sings the song “7:40” by the band Golem. According to the book Oy Oy Oy Gevalt! Jews and Punk, by Michael Croland, the song is “about a Jewish man in the Soviet Union who yearned for religious freedom so that he could practice as an Orthodox Jew. The lyrics, writes Croland, were about someone Annette Ezekiel Kogan, Golem’s founder, described as a “punk Orthodox guy.”

You don’t have to be Jewish to appreciate Jewish music.

Lily doesn’t want to go to the concert at first — she begs her brother, Langston, to get her out of it. But he tells her she has to go and says, “A Jewish punk show? Jewcore? I love New York.”

At the concert, there are people wearing tzitzit and kippahs, as well as people who aren’t Jewish at all. As lead singer Dov says, “Goyim are welcome!” When Lily runs into someone from her Christmas carol group and asks why she’s there, she responds, “Are you kidding? This music is lit.”

We understand the “kooks and weirdos.”

The reason Dash chose this particular dare is because Lily shared in the notebook about her worst Christmas ever: In middle school, she went to the Christmas dance and gave everyone homemade friendship bracelets. She was teased in return — and that was when she realized she didn’t fit in. Dash, however, wants to prove to her that “weird” is cool.

At first Lily is intimidated at the show, but then she dances wildly in the middle of the audience. Eventually she gets crowned “Miss Menorah.” It is fitting that the place where Lily starts to get out of her comfort zone is a Jewish concert; Jews have never been afraid to be different!

At the end of the episode, Lily runs into one of the middle-school bullies and leaves. At first, she feels like she failed Hanukkah by not standing up to her oppressor. But we think she was too hard on herself. By simply showing up — and experiencing both misery and jubilation — whe think she understands the true meaning of Hanukkah.