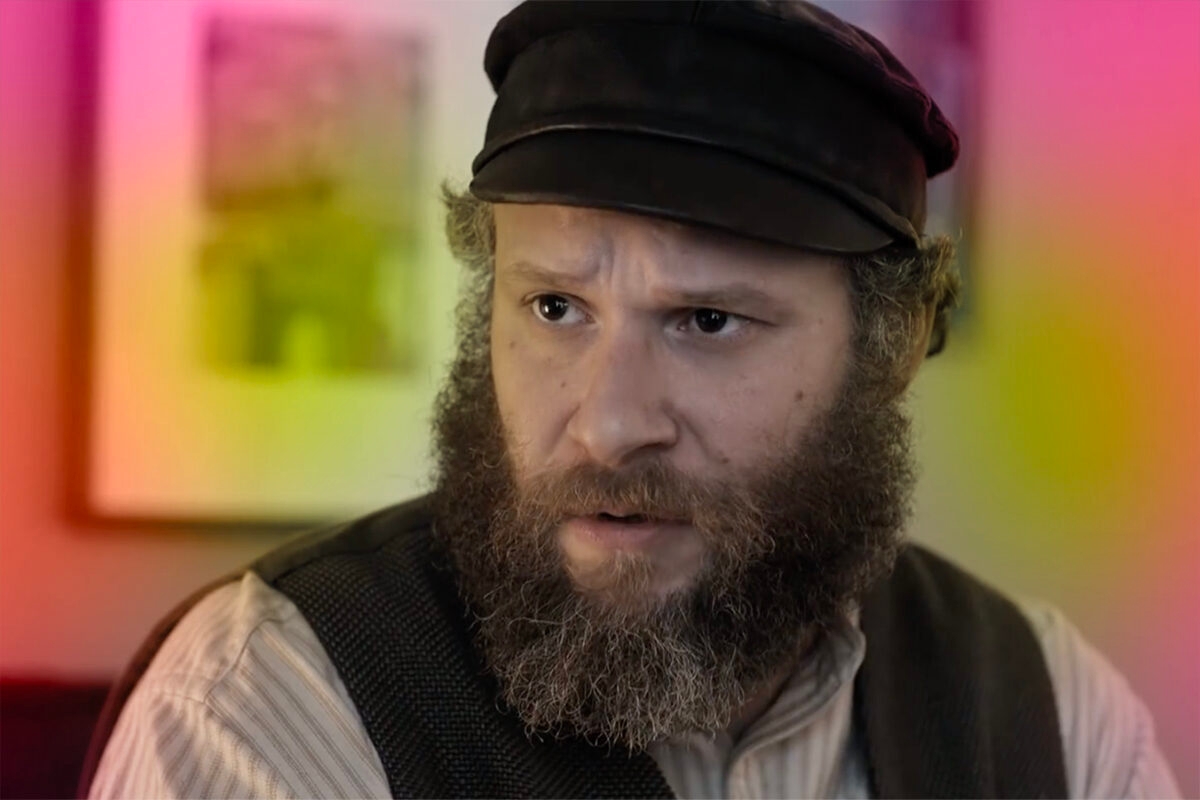 I was not expecting the first trailer of An American Pickle, Seth Rogen‘s upcoming HBO Max movie, to mean so much to me. But once the trailer was released on July 3, I felt compelled to watch it, again and again.

There was something so special and so moving about the almost three-minute-long trailer, which made me ask myself, “Could two Seth Rogens truly better than two Paul Rudds?”(The answer, I quickly realized, is yes.) I even tweeted “this trailer means everything to me,” as I watched a similar statements flood my Twitter feed from what appeared to be 85 percent of Jews on Twitter.

An American Pickle, out August 6, is based on a short story by Simon Rich called “Sell Out.” It’s about a Jewish pickle maker who comes to this country from the fictional Jewish village of Schluspk in Eastern Europe, and falls into a vat of pickles. A century later, the vat is opened and said pickle maker is instantly revived — he has been completely preserved in the brine. He goes to meet his great-grandson in modern-day New York and finds that reality for his Jewish progeny are not quite what he had dreamed of or expected.

This film seems destined for Jewish greatness, for many reasons. (The David Bowie reference also makes it destined for general greatness, too — but, you know, we here are a Jewish publication.) Let let us start with the smallest and most delicious Jewish highlight: the pickles. Pickles are an important component of great Jewish films — please see Crossing Delancey for reference. But they’re also a vital (healthy, and delicious) part of the Jewish American experience. While Jews did not invent the pickle, Jewish immigrants helped popularize brined pickles in this country, from dill pickle to half-sours, to yes, pickled tomatoes.

I grew up with Israeli brined pickles, which are incredibly briny and salty and are usually smaller than their American counterparts. Sometimes, my mom would make them, but mostly, they came in a can, ready to be sliced up and put in pita and hummus sandwiches for school.

When I first moved to New York, I got introduced to the American Pickle. I capitalize it because it is just so legendary. I was living in the Lower East Side, where a couple of old pickle shops, with their big plastic vats of pickles, still existed. The American Jewish Pickle (again, capitalized because import) is magical. To get a plate of half sours and sour pickles at a deli — that is the dream. Forget about the meats and the knishes — give me a bowl full of pickles; the refreshing, energizing flavor is all I need. That pickles are a central theme in this movie, and the crunchy, delicious food that manages to bond generations, and they  have the power to preserve human life in this movie, just makes sense — pickles are all-powerful, and I’m glad to have Rich and Rogen agree with me.

Then there are scenes from the old country, which feature both Rogen and Sarah Snook (who is, to the best of my knowledge, not Jewish, but is beyond incredible in HBO’s Succession). In these scenes, Rogen holds a Tevye-like appeal, and he and his on-screen wife speak Yiddish. I can not attest as to the accuracy of said Yiddish or said Yiddish accents, but, oh, it is a total delight to watch them converse in the Eastern European Jewish tongue.

There’s also the suggestion that this movie will talk about religion and Jewish mourning. In a particularly poignant conversation from the trailer, in which the Herschel talks with Ben about how he lost his two parents in a car accident. “I understand why you’re a religious person but I am not,” Ben tells Herschel.

“How do you grieve for dead parents?” Herschel asks.

“I’m doing OK,” Ben responds (though it is obvious from the brief trailer that he is probably not).

What’s more, this movie seems to be about Jewish pride. In one instance, Herschel talks about polio, when his great-grandson interjects: “You know they cured polio, right? A guy named Jonas Salk.”

“Was he a Jew?” Herschel asks.

“Yes,” he replies as Herschel pumps his fist victoriously. This just made my heart swell — who has not had this conversation with their Jewish parents or grandparents… or, erm, their children?!?

What is most moving to me, however, and what seems to be at the (Jewish) heart of this movie, is how we have so much to learn from our Jewish ancestors (and of course, how they have so much to learn from us). As Jews, our relatives came from their homeland to this country to escape persecution and oppression — but also to follow their dreams. And they worked pretty friggin’ hard at it, all while often suffering from the anti-Semitism that existed (and still exists) in this country, too. Throughout the decades, many of us have untangled ourselves from our ancestors’ culture — becoming more secular, more American. But those aren’t necessarily the things that have made us better.

I’m thrilled that my next film “An American Pickle” is coming to HBO Max this summer. I play an immigrant in 1920’s New York who falls in a vat of pickles and is brined for 100 years. When I wake up, I seek out my only family, my great grandson, an app developer named Ben, who I also play in the film. That old story… Can’t wait for you to see it. Also this is an actual Tin Type photo.

Back in April, Rogen posted a photo of himself as Herschel, taken as an actual tintype photo. It’s a striking image, and one that is endlessly familiar — these types of photos, of dead Jews, long-gone family members, adorned the walls of my home. And I think that is the case for many of us.

As Jews, these old, tattered black and white photos are often what we have left of our families. These photos are from Europe, and also from the Middle East. I’ve often imagined what it would be like to talk to these relatives, back then, to see what they have seen, to suffer what they have suffered, or to, you know, just make small talk. But so many of these family members have perished —  in the Holocaust, in pogroms, or have succumbed to disease and old age.

We look at these photos and see the shadows of ourselves, our brothers, our parents, our children. They are a literal part of us. In this movie, having Herschel and Ben Greenbaum played by the same actor, Rogen, is not just a fun (and funny) movie trick — it’s also incredibly appropriate and deeply moving. The fact that this movie is all about the relationship between that first immigrant generation of Jews and our current selves — spoiled, assimilated, and, in some ways, somewhat lost, millennial Jews, is just incredibly powerful and poignant.

Unlike, say, Adam Sandler (The Cobbler, Uncut Gems, and, yeah, as much as I dislike it, Don’t Mess With the Zohan), Rogen has rarely embraced his Jewishness as thoroughly as he does in this film — though being Jewish and being in Jewish spaces has undeniably shaped his life and career. But what strikes me in this trailer, and what sets it apart from the aforementioned Sandler movies, is just how incredibly sweet and loving it is. There are not cheap jokes about immigrants or accents. Rather, there’s hugging and bonding and feelings — a thing I am excited and hopeful the full movie will bring. There’s also punching, so, yeah, action for all.

I am so looking forward to An American Pickle, and I’m truly hoping that it will deliver on all the great, briny Jewish bounties that its trailer promises.