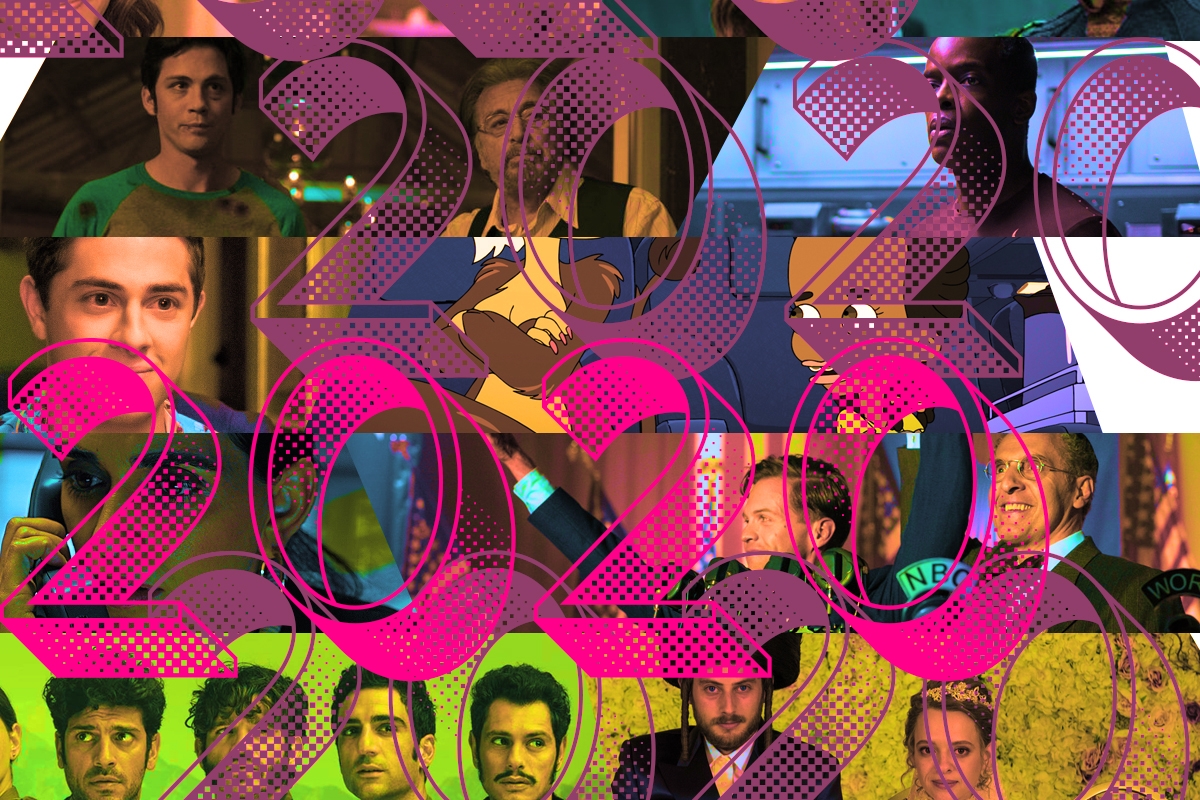 Watching 2020 unfold from the rising discomfort of our own homes has not been easy. But there was one thing that those of us cringing about news reports and scrolling through discomfiting articles about the Covid-19 pandemic could rely on: We could always change the channel, or open a new browser tab, and distract ourselves with some groundbreaking, masterful, and, at times, deeply comforting television.

This was truly an incredible year for TV — and Jewish TV, in particular (not to mention a year of new super-exciting and super-Jewish new films like An American Pickle and Uncut Gems, which reached HBO Max this year). From amazing new Israeli shows to an increase in diverse Jewish characters, to lots and lots of shows about Nazis, at any point, we could have said, “Dayenu!”

Except… not really. Though it’s been a banner year, we’re just scratching the surface when it comes to Jewish representation on screen — especially authentic and diverse representation — both in the cast and onscreen. Shows like Mrs. America reintroduced us to feminist Jewish pioneers like Gloria Steinem and Bella Abzug — yet none of them were played by Jewish actors. And not all shows that attempted diverse representation succeeded — Netflix’s newest teen show, Grand Army, for example, gave us an adopted Jewish character who failed to meaningfully engage with and authentically represent her minority identities. Certainly, there is still so much more that we could wish for in 2021.

But as we look back on this very difficult year, let’s celebrate the great TV that, despite everything, still came out of it. Below are my picks for the best of the best.

Unorthodox was the Jewish smash of this year — there is absolutely zero doubt about that. Even if you think the miniseries is a flawed depiction of ultra-Orthodox society, one thing is true: Audiences and critics alike were windswept by the Netflix award-winning hit, which is based on the memoir of the same name by Deborah Feldman.

The show, which landed its fiery star, Shira Haas, an Emmy, is a fictionalized version of Feldman’s tale. Haas stars as Esty Shapiro, who escapes her Haredi Satmar home, where she never felt like she truly belonged, and finds freedom and hope for a happier future in multicultural Berlin.

While the show’s portrayals of the specificities of Satmar life enchanted audiences, co-creator Anna Winger told me earlier this year that the reason the show resonated with so many is that its message is relatable to so many — Jewish or not.

“The struggle to fit in, that’s a universal struggle,” she said. “You know, lots of Catholics have told me, ‘This is my story.’ Someone from a tiny village in Bavaria who is like, ‘I moved to the city. I love where I come from, but I was looking for something else,’ you know. So that’s been really great.”

Choosing the “best” Israeli show of the year was tough — Israeli TV really leveled up in 2020. (It was already excellent, but as the world started to notice, Israeli creators have been able to get international deals that brought in unprecedented budgets and audiences.)

If forced to pick a fave, I’d go with Valley of Tears. It’s a searing drama about the Yom Kippur War, and it expertly plumbs Israel’s deepest wounds with riveting characters, superb acting, an accomplished script, and groundbreaking visual effects (for Israeli TV, at least). The show, currently available on HBO Max, is a must-watch (though it’s not recommended for those with combat-related PTSD).

Wowaweewa! The HBO miniseries The Plot Against America, based on the eponymous book by Philip Roth, is a harrowing tale about a dystopian U.S. that joins hands with Nazi powers, as seen through the eyes of a Jewish family that looks a lot like Roth’s real-life one. Created by David Simon, the Jewish creator of The Wire, and filmed in his and Roth’s home state of New Jersey, the Jewish life depicted in the show is evocative — and so is the Jewish strife.

In a moment in which antisemitism is on the rise, watching a show about an America that literally persecutes Jews is discomfiting, yes. But it is also truly masterful TV.

No, Charhi doesn’t play a Jewish mom in Tehran, the Israeli thriller that’s streaming on Apple TV+. But she is one of the true standout characters in this intense nail-biter of a thriller that involves an Israeli Mossad agent attempting to infiltrate the Iranian capital.

Charhi, who herself is Jewish and Iranian, plays Yael Kadosh, the handler of the main character in the show, Tamar Rabinyan (played by Niv Sultan). Charhi is truly brilliant in the show — she’s one of the most seductive, complicated characters, and is an unforgettable part of the show’s surprising first-season ending. Plus, she released an incredible feminist Farsi album this year that you need to listen to. In short, we’re obsessed!

Essandoh plays a Black British Orthodox Jewish astronaut Kwesi Weissberg-Annan in this drama about a mission to Mars — giving us diverse Jewish representation and excellence all at once. Essandoh, who plays a botanist on the groundbreaking emergency mission, brings a Torah book onboard and is shown praying in Hebrew when the going gets rough.

And while Essandoh isn’t Jewish IRL, this isn’t his first Jewish role — he previously played a religious Jewish doctor in Chicago Med. “We have to learn the constructs that we have been under — like my construct that ‘all Jewish people look white, that’s what they are.’ No, there’s a whole set of people who practice Judaism who don’t look this way,” Essandoh told JTA earlier this year.

At this point, Essandoh is kind of an honorary Jew. He’s been to seders,  he can recite the Traveler’s Prayer, and his Ghanaian family is obsessed with bagels. And, honestly, we’re lucky to have him!

This animated show about a group of adolescents is truly brilliant. There are several Jewish main characters (three of the show’s creators are Jewish: Nick Kroll, Andrew Goldberg, and Mark Levin) including Missy Foreman-Greenwald, a Black Jewish girl who had been voiced by white Jewish actress Jenny Slate.

Earlier this year, after increasing backlash about Black characters being voiced by white actors, Slate decided to relinquish the role. She wrote a moving, earnest message about why it was not right for a white actress to continue dubbing the character. So, during season 4 — which premiered in December 2020 — Slate is replaced by comedian Ayo Edebiri, who also joined the show as a writer for season 5.

This season of Big Mouth also showed Missy reckoning with racism and coming to terms with her identity, with storylines that included poignant (and always funny) commentary about code-switching.

Mrs. America, the FX miniseries about the 1970s attempt to ratify the Equal Rights Amendment, centering on Phyllis Schlafly, a conservative anti-feminist activist who helped foil its advancement, is a technicolor historical delight, proving that you can create a fairly accurate deep dive into Jewish history that’s entrancing — both visually and narratively.

The Jewish activists centered in the show — Gloria Steinem, Betty Friedan, and Bella Abzug — helped shape the history and the advancement of women in this country. And while the show doesn’t cast Jewish actors to play any of these central Jewish figures — it does offer us masterful portrayal of these characters, especially Margo Martindale’s Bella Abzug, who is fiery, fierce and lovable.

The show also doesn’t gloss over how Judaism impacted their evolution and their activism. At a date, Friedan and a partner discuss Pirkei Avot and Birkat HaSachar to contextualize her fight for women’s rights. She talks about being the only Jew in her WASPy Illinois suburb. In another episode, Abzug counters an accusation that she is “pushy and loud” with a: “you know that’s code for Jewish.”

Best Jewish teen crush: Jaren Lewison in Never Have I Ever

Is Jaren Lewison’s character in the excellent Mindy Kaling show Never Have I Ever,  — rich, money-loving, ruthlessly high-achieving — a bit of a Jewish stereotype? Yes, yes he is. But nobody can watch the entire first season of this delightful Mindy Kaling show and say that he isn’t an incredibly lovable and deeply human character. I love that a not-so-nice Jewish boy turns into a nice Jewish boy, and then becomes the love interest of the main character in this popular new show, and can’t wait for season 2.

Best show about Nazis: The Boys

Yes, a dystopian show about a group of corporation-backed superheroes that winds up being villainous, and the group of vigilantes that tries to expose them, may not be the obvious contender in this here category.

But season two of The Boys — which is created by Eric Kripke, who is Jewish — explores white supremacy and xenophobia in a really powerful way. It also shows how Nazi ideology (yes, literal Nazi ideology) is easily spread through social media, especially if those spreading it are attractive, populist spokespeople.

This show, with a Jewish creator and cast, is a dystopian story about a group of Nazi Hunters that uncovered a plan to recreate the Third Reich in 1970s New York. It was criticized by the Auschwitz Memorial for one truly harrowing fictional scene in which a camp official plays a deadly game of human chess with Jewish prisoners.

Still, Hunters uncovers some amazing true Nazi history, and while its Jewish representation may be uneven, it is very also nerve-wracking and entertaining. Plus, Al Pacino’s Yiddish accent really got us.

The best appearance of Jewish religious music in an unrelated show: I May Destroy You

HBO’s I May Destroy You is one of the most devastatingly brilliant shows I have ever seen. Created by Michaela Cole — who stars as Arabella — it poignantly explores consent, victimhood, and trauma. The show spotlights Arabella, who, after being raped, tries to put the pieces of her life together. It also has one of the most interesting inclusions of a Jewish song in a non-Jewish moment that I’ve ever seen.

“The show’s unpredictable brilliance is encapsulated by a moment when Arabella sits destitute on an Italian beach, at her lowest ebb. Respect to whoever decided that the only music that could possibly match this particularly crushing moment was the Shaar Hashomayim Synagogue Choir from Quebec belting out a stirring Jewish prayer. Amen to that,” Adrian Hennigan writes for Haaretz.

Best depiction of mom strife by Jewish creator: Dead to Me season 2

Liz Feldman, the Jewish creator of Dead to Me — the Netflix tragicomedy about two women who meet each other after incredible losses and form an unlikely friendship — created a second season that, to me, truly encapsulated the impossible stress of pandemic parenting.

True, I may not have accidentally killed a person like Christina Applegate and Linda Cardellini’s characters did — but I certainly felt all their craziness, and stress, and all their feelings of complete ineptitude. I didn’t expect this show to make me feel seen, but in this insane year that was 2020, it totally did.