The Fascinating History of Hanukkah Merch in America 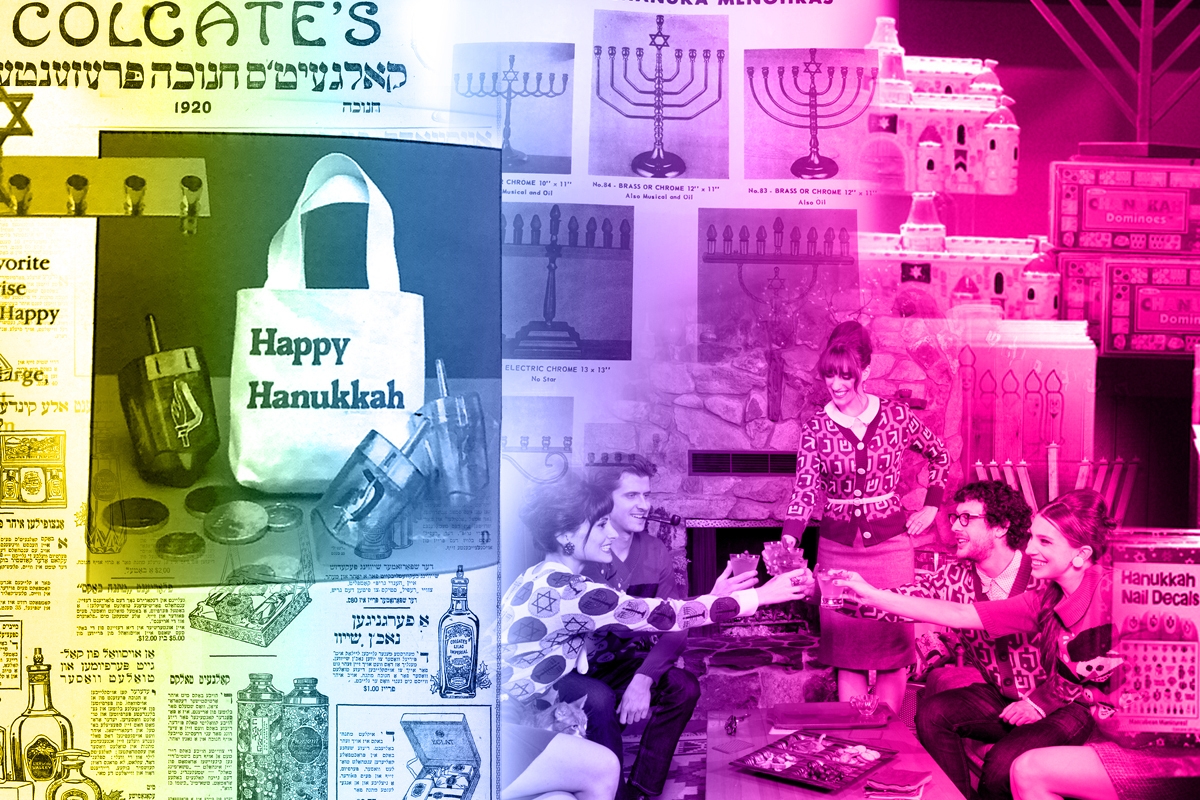 In 2013, I found myself transported back to the Borscht Belt — or at least what I think of as the Borscht Belt, based on my knowledge from The Marvelous Mrs. Maisel — except that, instead of the Catskills, I was at a trade show at the Javits Center in Manhattan. Under the bright fluorescent lights, I watched a reunion of sorts transpire among Jewish business owners who make Hanukkah gifts, everything from electric menorahs to those Hanukkah-themed oven mitts that were used year-round in my childhood home.

It was fun to observe these individuals enthusiastically greet one another, kibbitz together, and show off their latest merchandise. I didn’t realize it at the time, but many of my fellow trade show attendees represented an essential slice of American entrepreneurial history — a history that I would soon become a part — that helped commercialize and crystalize Hanukkah as a significant holiday in the U.S.

I arrived at the world of Hanukkah retail a bit unexpectedly in 2011. Having painted my own nails with designs appropriate for various Jewish holidays, individuals began to reach out to ask where they could buy them. I set out to discover how to produce Jewish nail decals —  not exactly something I learned in my rabbinical school training. Initially, I ordered the same amount for each set of nail decals, for the High Holidays, Hanukkah, and Passover (ten plagues for ten fingers, of course). Little did I know that American Jewish consumers did not treat all holidays equally. In the world of Jewish holiday merch, Hanukkah reigns supreme.

The history of Hanukkah merch in the U.S. dates back to the turn of the twentieth century, when two million Jewish immigrants from Eastern Europe came to America, the “Goldene Medine” (Golden Country). At the time, the U.S. had a teeming Christmas market — but no Hanukkah Judaica market to speak of. The 1920s saw growth in generic Hanukkah gifts, something that was mostly propelled by advertisers in Yiddish newspapers. A 1920 Colgate ad from the Forverts, for example, demonstrates how advertisers tried to brand any products as suitable to be gifted for Hanukkah, including dental cream for kids and perfume for grownups. This Hanukkah ad interestingly contained the image of a Christmas tree, which was considered at the time a secular symbol of the American holiday season.

Early Yiddish ads also encouraged readers to use American ingredients to prepare Hanukkah meals. According to food historian Jane Ziegelman, American manufacturers made a big push to introduce baking powder and other modern ingredients to the Jewish homemaker. In 1917, The Hecker Cereal Company, for example, placed an ad in the Yidishe Tageblatt for “pancake flour” to make “Hanukkah latkes.” Latkes were typically cooked with schmaltz and potatoes, but this ad tried to convince immigrants to serve pancakes instead.

These new traditions of Hanukkah gift-giving and baking helped Hanukkah become more mainstream in the 1920s and 1930s. In Hanukkah in America: A History, Dianne Ashton explains how, in the 1940s, rabbis and Jewish women’s organizations encouraged mothers to make decorations for Hanukkah and have special Hanukkah meals. They wanted to make Hanukkah just as appealing to children as Christmas was to their Christian counterparts. It was around this time that the first Hanukkah-branded products began to appear on the market, from Hanukkah chocolates to Hallmark Hanukkah greeting cards.

Following the devastation of the Holocaust, the Hanukkah marketplace experienced even more growth. According to Ashton, “American Jews sensed that the future of world Jewry depended on them.” This new Jewish American ethos led to the founding of several Judaica wholesalers, many of whom were represented by their second-generation owners at the trade show I attended in Manhattan, decades later.

These early entrepreneurs sought to capitalize on this heightened sense of Jewish identity by bringing more Judaica into American homes. They produced the first modern Hanukkah products in bulk, beginning with traditional brass menorahs of the 1940s to musical menorahs of the 1950s to the electric menorahs of the 1960s. Alex Rosenthal, a second-generation business owner of the Judaica wholesaler Rite Lite, explained to me that when his father, Jacob, started the business, he figured that once he’d sold 1,000 traditional brass menorahs, he’d saturated the market — but the orders never stopped coming. It turns out, the market for menorahs was larger than he ever imagined.

The Hanukkah marketplace continued to grow. By the 1980s, the birth of the millennial generation (of which I am a part) fueled a market for child-centered items, like Hanukkah stickers and oversized, gelt-filled dreidels. In the 1990s, Judaica wholesalers, through trade shows, successfully earned Hanukkah products a spot on the shelves of national department stores. Hanukkah tablecloths, electric menorahs, and dreidel cookie cutters have adorned the shelves of national chains, including Bed Bath & Beyond and Bloomingdale’s, for over three decades. This move took Hanukkah products nationwide and further elevated the holiday’s prominence in America.

Online shopping contributed to yet another shift in the Hanukkah market. The new marketplace of Etsy and other independent shops, including ModernTribe, carried niche products designed by artists and small businesses that were produced on a much smaller scale. Companies like GeltFiend helped popularize the “ugly” Hanukkah sweaters. My own business expanded to include Hanukkah leggings, cold-shoulder tops, and scrunchies (Justice Ruth Bader Ginsburg, of blessed memory, wrote to me that she would wear her Hanukkah scrunchie year-round!).

Retail giants such as Target also began to recognize the sales potential of Hanukkah-themed apparel. In previous years, Judaica wholesalers typically provided national chains with Hanukkah products. But since around 2015, many of these big brands have taken it upon themselves — as they already worked in clothing production — to design their very own Hanukkah apparel (including the ever-so-popular trend of matching Hanukkah pajamas).

Which brings us to 2020. This year, Hanukkah will certainly look different. But it’s not all bad — given the exponential growth of the Hanukkah market, people across the country now have access to Hanukkah gifts and apparel for themselves, their children, and even their pets (oy vey!).

Over a century ago, Yiddish ads helped to situate Hanukkah as a holiday of American consumption – both literally and figuratively. Yet it was thanks to the creativity of first-generation Jewish wholesalers of the late 1940s who positioned Hanukkah to become a menorah-buying — and now, menorah-wearing — holiday in America. Those second-generation Judaica wholesalers may have had their last in-person hurrah at the Javits Center, given that in-person trade shows are likely a relic of the past. And yet, these Hanukkah entrepreneurs and their online successors have helped saturate the Hanukkah marketplace with both ritual items and humorous apparel — perfect for the Zoomable and Instagrammable holiday moments of the future.