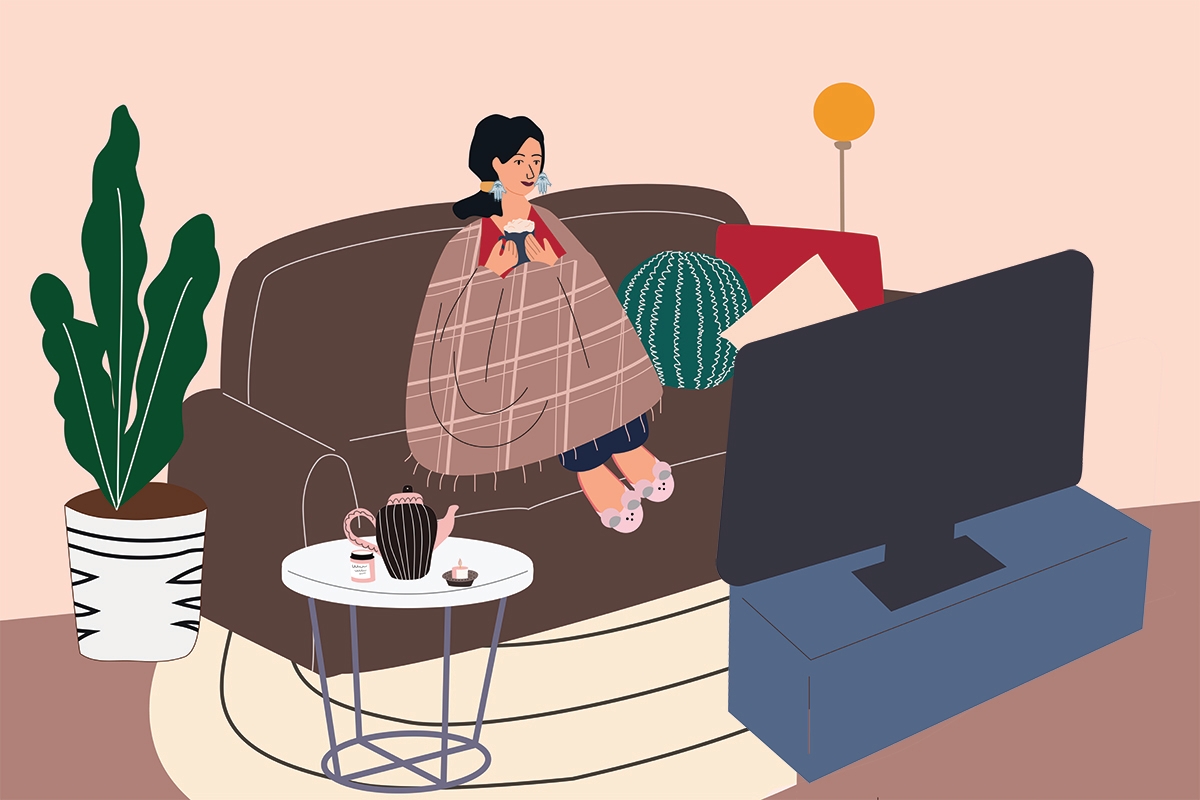 Like so many of us, I can’t forget the Election Day of 2016. The bottle of wine that was meant for a celebratory toast that we ended up nervously gulping down; a celebratory plate of fancy donuts that went unconsumed and was left to go stale (still sad about those donuts!); the fitful sleep after realizing we wouldn’t get official results that night. I spent the entire evening glued to the news and to Twitter, and I can honestly say, it was really incredibly detrimental for my mental health.

In short, it’s not something that I plan to repeat this time around. (This year, my husband made a pot of chicken soup — perfect for whichever way the Electoral College goes!). No matter the results of this election — and it’s likely we won’t get them tonight —  it’s important to take care of ourselves, and our psyches, on what could be a very triggering night, or week, or… well, let’s not think about that right now.

So, if you’re like me, and are looking for something distracting, uplifting, and engrossing to watch, I’ve assembled an eclectic list of Jewish TV shows and movies that will help keep you entertained and comforted. Watch as many of them as you need — just so long as you’ve cast your ballot.

This is your periodic reminder that Crossing Delancey is still the best Jewish rom-com ever made and that it totally holds up in 2020. This matchmaking story between a Lower East Side pickle vendor and a fabulous career woman played by Amy Irving is the warm, Jew-y, briny hug that you need.

I recently re-watched The First Wives Club and was surprised to find myself cheering loudly at the screen. Yes, nearly 25 years may have passed since this movie — about a group of college girlfriends who band together to get what they deserve from their, forgive my French, loser ex-husbands — premiered, but it still holds up today. The cast is super Jewish, including Bette Midler, Sarah Jessica Parker, Dan Hedaya, and Goldie Hawn. There’s also a bar mitzvah scene; Jewish singer Lesley Gore’s “You Don’t Own Me” makes an empowering appearance, and Dame Maggie Smith plays a character named Gunilla Garson Goldberg. What more can I say? Well, there’s so much more I can say about this movie, but it’s a feminist must-watch that will definitely bring you joy.

If you want to be transported far, far away, how about the town of Beit HaTikvah? The Band’s Visit is a delightful little Israeli movie (that got turned into an even more delightful Broadway musical) about an Egyptian band that gets stranded in a remote Israeli town after taking the wrong bus to a performance. This movie will take you away from America of 2020 to a land of co-existence, sweet, intoxicating melancholy, and skating rinks.

There’s nothing really Jewish about this movie aside from Jewish dad Jack Black rocking out. (OK, there’s also Sarah Silverman, as well as Rivkah Reyes, who plays Katie AKA “Posh Spice.” But, honestly, maybe Black and his infectious rocking-out energy are all we need right now.

Fiddler on the Roof

Fiddler on the Roof is on Netflix right now, and it’s the nostalgic, three-hour-long detour to Anatekva that some of us crave. Get your shtetl cosplay on, print out some lyrics sheets, and make a night out of it.

Jewish kids playing basketball! Hanukkah miracles! Wholesome Jewish entertainment! If you’re looking for a family-friendly movie, this movie about a team of Jewish boys getting their own Judah Maccabee to lead them to victory is a great option.

Zero motivation is about the amount of motivation I have today! But also, this delightful comedy about a friendship among disgruntled IDF soldiers working office jobs in a remote Israeli base is funny, silly, and distracting.

Phil Rosenthal has a look of joy when he eats something truly delicious — and that look is so infectious, innocent, and joyous. Rosenthal, the very Jewish creator of Everybody Loves Raymond, brings you a world of deliciousness as he travels the world and samples local dishes with his crew. This show is truly like a warm (appetizing) hug, and look out for the magical cameos from his sweet Jewish family. And, yes, there’s an episode in Israel.

This sweet, Emmy-award winning, Canadian ray of sunshine is pure joy, and perfectly distracting. Created by and starring father-and-son team Eugene Levy and Dan Levy, this series is about a half-Jewish, fully delightful family’s journey from riches to rags in the town of Schitt’s Creek. If you haven’t yet watched it, do yourself a favor and remedy that. All six seasons are now available on Netflix, along with a goodbye special.

Israeli TV shows are usually very heavy, so it’s nice that the first season of this delightful Israeli comedy takes on Israeli toxic masculinity in a lovely and not-at-all preachy way. It is a really nice and surprisingly uplifting distraction.

The first season of this dark Israeli comedy — about a group of friends hiding the body of a recently deceased economist, rumored to be a future Nobel Award recipient — is just so entertaining and full of amazing Israeli actors.

Aaaah, summer camp nostalgia, plus ridiculousness! The Wet Hot American Summer reboots just really make me laugh — I love watching how these Jewish actors (David Wain, Michael Ian Black, Michael Showalter, Elizabeth Banks, Paul Rudd — truly a wealth) have changed over the years (in the case of Rudd, of course, the answer is not at all).  Rewatching it really does transport me to a totally different time and place.

The Baker and the Beauty

Do you need romance? Do you think a telenovela-type show will distract you from… all this? Then the Israeli series The Baker and the Beauty (now shooting it’s 3rd season!) is exactly what you need. A Yemenite working-class baker falls in love with a world-famous supermodel — resulting in the star-crossed Jewish romance of our dreams.

Bonus round! Another great, distracting option is to rewatch many-season Jewish classics, like Curb Your Enthusiasm, Seinfeld, Friends, Will & Grace, Grace & Frankie or Gilmore Girls (OK, that last one is only marginally Jew-ish). All of these series are available for sustained nostalgic binging if that’s what you need right now.

Bonus round, part 2! Our friends at Alma have collected a series of fun YouTube videos to watch after voting if your attention span is shot right now (hey, we get it).

Happy voting, Kvellers. Remember to breathe, hydrate, give your kids a hug (or a call if they’re far away) and take care of yourselves!