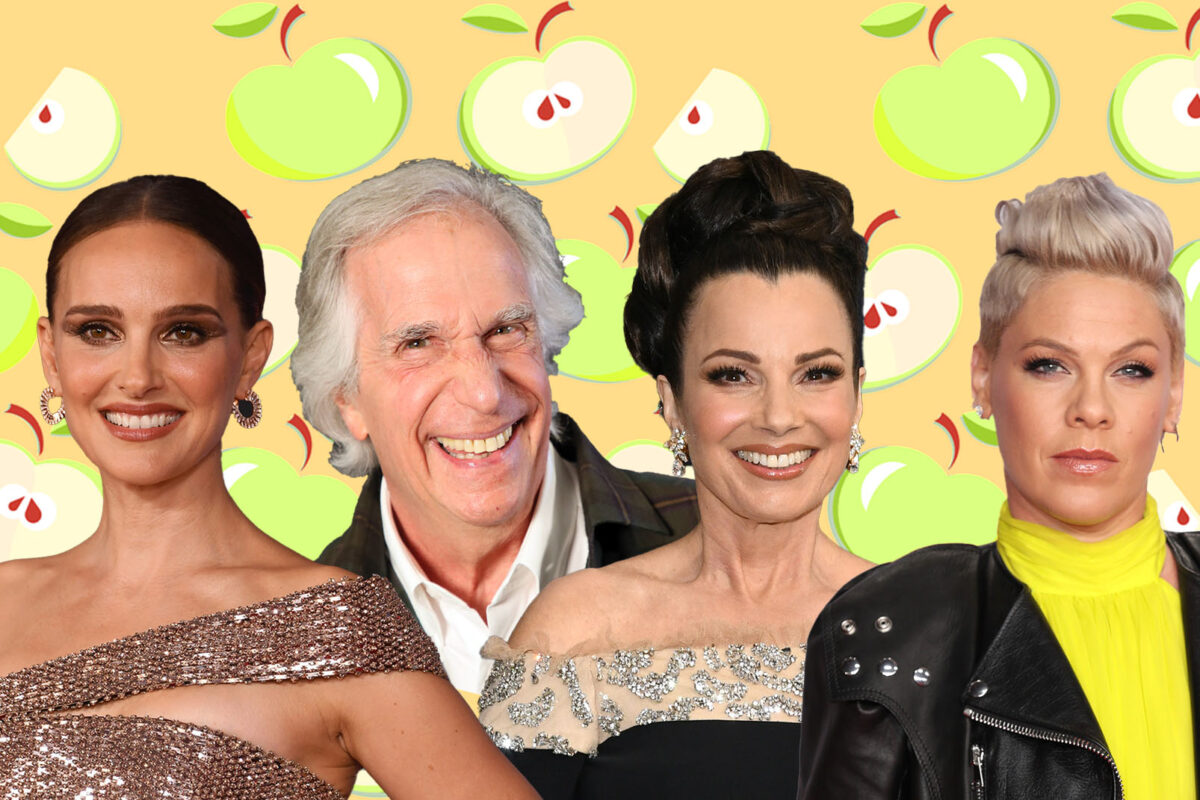 Shana tova, everyone! The Jewish New Year began this past Sunday evening. It’s a time of reflection for us all — yes, even for Jewish celebrities.

Here’s how our favorite famous Jews celebrated and reflected on Rosh Hashanah in 2022 — or rather 5783.

For “Unorthodox” star Shira Haas, this past Jewish year was a complex one. She lost her mother to cancer, and posted an incredibly moving eulogy for the woman who raised her and helped her achieve her dreams. And yet, she’s also been cast for some really incredible projects, including her upcoming role as an Israeli Marvel superhero.

On Rosh Hashanah, she wrote that while this was “a year of love, dreams, of accomplishments,” it was also one of “pain, longing, of loss.” For her, the year was “hard to conclude in words. Maybe it will never be possible, and perhaps it shouldn’t.”

Jewish second gentleman Douglas Emhoff posted a sweet Rosh Hashanah video to social media. He also wrote an op-ed in USA Today about the need to recommit to fighting hate this year, mentioning both his annual childhood Rosh Hashanah dinners and his 2018 visit to the Tree of Life synagogue in Pittsburgh.

“As we look forward to the new year, we must continue working toward building an inclusive society for all that is free of bigotry and bias, and commit ourselves to combating antisemitism and hatred wherever it exists,” Emhoff wrote.

“The Nanny” star and mah jongg aficionado Fran Drescher shared a sweet and joyous message for the new year.

“This weekend is Rosh Hashanah, the Jewish new year,” she told her followers on Instagram. “It’s a happy holiday and it marks the beginning of the new year, with wonderful hope and optimism, and both myself and Cancer Schmancer wish you all a happy healthy new year.”

She also shared some organic macaroons that she got gifted — “I can’t wait to eat it, happy new year!”

New Jewish dad Bryan Greenberg kept his Rosh Hashanah message brief and sweet, just tweeting out a “Shana Tova!” We get it — he’s got twins on his hands, after all.

“West Wing” star and “Chutzpod” co-host Joshua Malina has a tradition of sharing this picture of him blowing the shofar every Rosh Hashanah. We can’t be mad about a recycled Rosh Hashanah greeting when it’s a very good one.

A HAPPY and SWEET New Year to you all !!

Sarah Silverman forgot about Rosh Hashanah this year — and let’s face it, she’s not the only one. She was sitting at a coffee shot when she muttered an “oy” and a guy near her, surmising she is Jewish, wished her a happy new year. “And that’s when I realized it was Rosh Hashanah,” she wrote, adding #badjew and #shanatova.

I was at a coffee shop and spilled a little by accident, resulting in an under-my-breath “oy.” A guy near me said “did you just say ‘oy?’“ and I said yeah and he said, “Happy New Year”
Life is sweet

Jewish mom of two Pink shared her Rosh Hashanah spread in her Instagram stories — it included some very pretty looking challahs, kugel, a yummy looking squash dish and apples and honey, of course. Pink has spoken about her tradition of making challahs with her Jewish mom, Judith, in the past and she even shared a little braiding demo with us for the Jewish New Year. What a treat.

“House” star Lisa Edelstein wished everyone a shana tova and shared a video of a young child blowing the shofar at her vegan new year celebration, which included “grandparents, children, dogs, a mayor, a bevy of artists and writers and actors, a mini shofar blower and one little boy in a glamorous gown.” Sounds truly fabulous.

Shana Tova to all who celebrate! We had a #vegan feast with grandparents, children, dogs, a mayor, a bevy of artists and writers and actors, a mini shofar blower and one little boy in a glamorous gown. What a way to begin bringing in a happy New Year! pic.twitter.com/7NbUzzWZRN

Comedian Billy Eichner started the new Jewish year by getting news that his movie “Bros,” which is coming out this week, hit 95% fresh on Rotten Tomatoes. “BEST ROSH HASHANAH EVER,” he tweeted. We concur.

“And whoever uses people as handles or as rungs of a ladder
Will soon find himself hugging a stick of wood
And holding severed hand and wiping his tears
With a potsherd.”

Molly Yeh is opening a new restaurant in her home state of Minnesota this Jewish new year. The Jewish mom of two named it after her oldest daughter, Bernie. The restaurant is officially opening this coming Saturday, so Yeh celebrated the new Jewish year at the restaurant doing some prep and making Jewish delicacies with its staff, including matzah ball soup, babka, challahs and more.

“My Unorthodox Life” stars Julia and Batsheva Haart shared some fun recipes for Rosh Hashanah on their Instagram accounts, including leek patties and apple cider mimosas. Sounds like a good brunch to us!

A post shared by BATSHEVA // My Unorthodox Life (@batshevahaart)

“Jeopardy” host Mayim Bialik (who explains the holiday oh-so-well) attended two outdoor services this year, because she didn’t want to spend many hours indoor and masked. And of course, she was the shofar blower (using a yemenite shofar  she got from her Jewish grandmother!). She and Jewish dad Max Greenfield discussed shofar blowing at “The Late Late Show With James Corden” this week, and it was delightful: