I Am Anti-Tattoo. Then My Son Got One of My Face. – Kveller
Skip to Content Skip to Footer 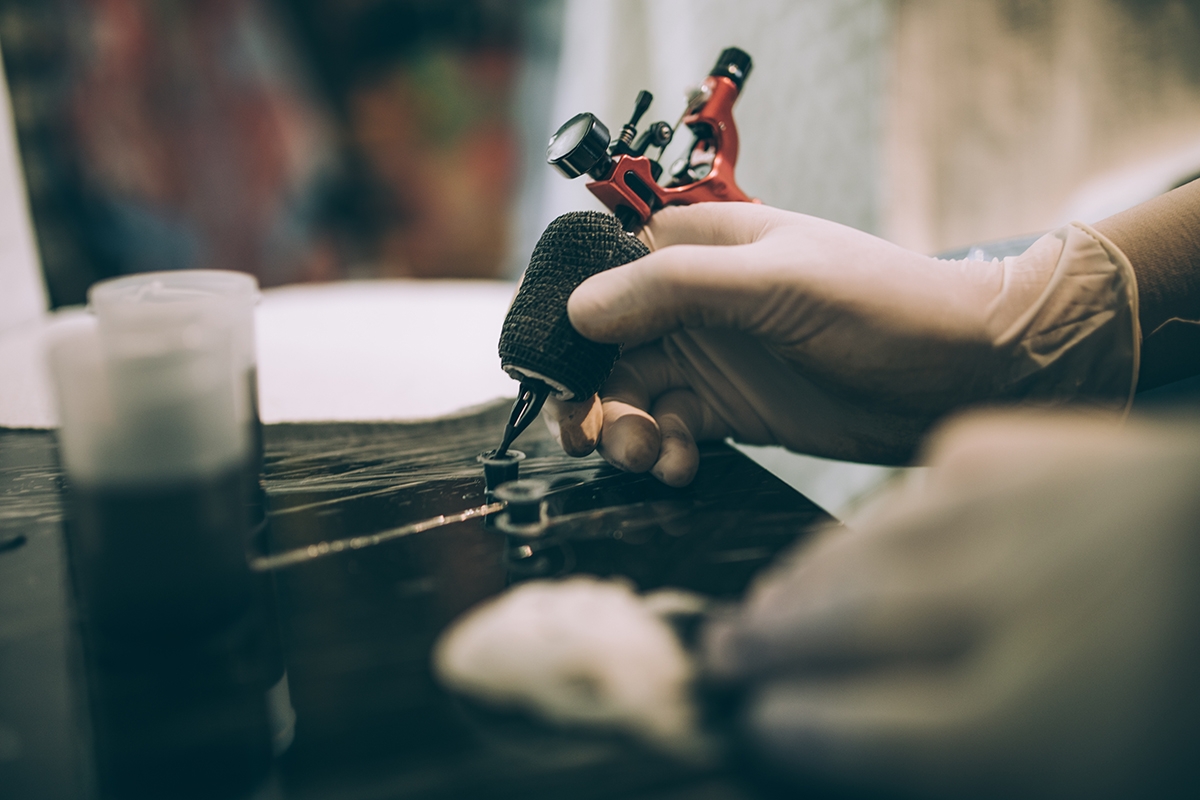 Growing up in Los Angeles in the early ‘90s, I had a bit of a rebellious spirit. As a teenager, my friends and I liked to skip school to hang out at Venice Beach, or head to Melrose Avenue to shop for used pairs of 501s.

One particular day when I was 17, I found myself on the Sunset Strip, where I marched into a tattoo shop. With an abundance of false confidence, I picked out a tribal black sun to be forever etched on the outer part of my right ankle. I honestly do not remember the reason for this particular choice, and I suppose that it doesn’t really matter. But what I do remember is how excited I was to show it off at school, hoping it would grant me acceptance into the cool crowd.

It didn’t work and, to make matters worse, a year or so later, I had my entire ankle wrapped in a funky anklet design to complete what would become one of the biggest regrets of my life. It only took a few years before I began hating my tattoo. Every time I looked at it, I was reminded how foolish I was for once believing that a tattoo would somehow erase my teenage feelings of inadequacy. I spent much of my 20s covering it with special makeup. When that grew tiresome, I simply stopped wearing shorts or skirts, sentencing my long, thin limbs to a dark existence.

My children, who are now 21, 15, almost 12, and 10, have heard this story countless times. They know how I feel about tattoos, and how I deeply regret my impulsive decision. I even schlepped my two youngest, when they were 8 and 9, to my first tattoo removal session, where they witnessed the pain and discomfort I endured. Obviously, I did this intentionally, in hopes of deterring them from any future ink sessions.

Of course, even at the time, I knew there were no guarantees my strategy would pay off — our children grow and become owners of their own lives. And while I hope they will take my struggle into consideration, I know that my children will one day be rulers of their own decisions.

Which brings me to the story of my oldest son.

Last April, my oldest, who lives in Austin, told me that he was going camping with friends. While he was away, I was excited to see he posted a story to his Instagram feed. Parents with children living far from home will testify to the excitement of seeing our kids’ social media posts — it gives us, while ever so small and skewed, a visual glimpse of the physicality of their daily lives.

In the story, I saw my son sitting at a picnic table with some black markings on his thigh. At first, I was confused. I played the story again. And again. And again. With fear, shock, and numbness running through my body, I took a screenshot of the video hoping what I thought I saw was a visual misunderstanding. I went to my photos and zoomed in on the said marking — placed on the thigh that I birthed —  and immediately texted my son.

Him: “Sorry but my choice”

(Not true. Four  months prior, he visited for the holidays and came downstairs in his underwear with tattoo-free thighs.)

Me: “How many more are you going to do?’

Me: “Ok. It’s your body. Just please choose wisely and do not tattoo your neck or face ever. That would be an awful mistake that you will grow to regret deeply.”

“I wish you would have shared with me. I love you.”

As cool and calm as my exchange seems to read, rest assured that cool and calm was not how I would have described my state. I was spinning. Tears were coming down hard and I was ever so grateful that my husband, who is not my son’s biological father, was deeply snoring away into the night.

I thought a lot about my 17-year-old self; the girl with so little self-esteem that she got a tattoo in hopes that it would make her accepted. Clearly, I was projecting my own feelings about my own self-worth — or lack thereof — onto my son. But I was worried: What if he felt this way about himself, too? Were his tattoos an attempt to fill an internal void? And what did that mean, exactly? Did I fail to raise a secure and confident child?!? I was so upset because this was the one thing I wanted to avoid coming out of my difficult childhood. I was afraid that he would live the rest of his life shame-hating himself for getting the tattoos — because that was how I felt.

I cried myself to sleep and, the next day, I shared my pain with a close friend, sending her the video and filling her in on the details. While I do not recall exactly what she said — something about him being an “adult” and that this was his decision, yada yada yada — what I do remember is her texting me after she viewed it again, saying, “Look at how happy he is.”

“Happy?? Who cares if he’s happy?” I thought. “His entire thigh is saturated with tattoos.”

Nevertheless, I replayed the story and realized she was right. My son exuded happiness and very clearly seemed in his element. I took a deep breath, smiled, and again the tears began to flow. But these were very different tears than the ones I shed the night before.

I frankly do not recall the next conversation I had with my son and what unsolicited guidance I managed to impart. But when he showed me the rest of his markings over FaceTime, I was surprised to see that he gave homage to his Jewish and Israeli roots. Among the markings was an outline of Israel, a hamsa, and a bear wearing a star of David necklace, inspired by the film “Inglourious Basterds.” While I was still extremely sad, I was also tremendously proud in a paradoxical way. Weeks later, when he added the names of his siblings to his increasing tattoo count, I found myself no longer sitting tattoo-shiva but rather sitting in complete awe.

But the story doesn’t end here. A few months later, my son asked for baby pictures of himself with me. Given he is the oldest this was an easy request —  I literally have hundreds of baby pictures of my first born. My initial assumption was that he was making a photo book for my birthday. But then my birthday came and went, and no photo book arrived in the mail.

The next time my son came for a visit, he told me he had a surprise for me. I already had my suspicions about what he was going to show me. But as he lifted up his shirt to reveal my 24-year-old face tattooed on the side of his abdomen, I found myself unable to speak. After what seemed to be several minutes, I finally managed to say, “My eyebrows sure were thin back then. Do you think your tattoo artist can draw them a little thicker?” 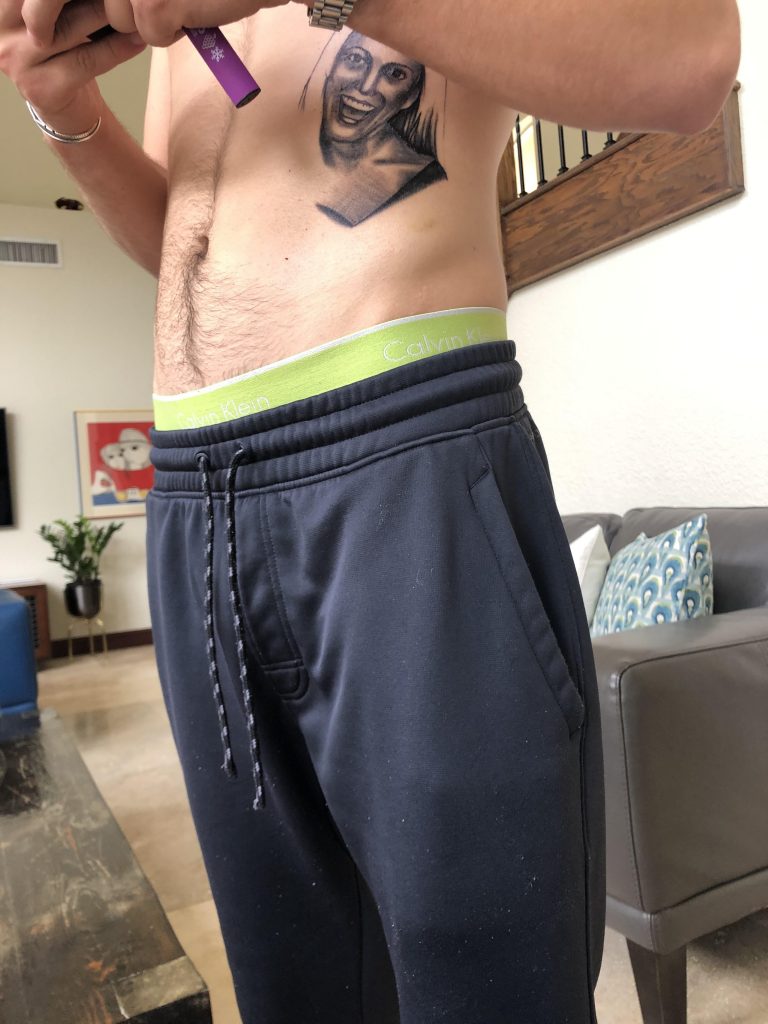 The author’s son, with a tattoo of herself at age 24. (Courtesy of Gal Mark)

Honestly, I have yet to wrap my head around this gesture, and absorb the generous gift and deep expression of love that was bestowed unto me in the most unusual way. It’s ironic that as much as I despise tattoos, I have literally become one, inscribed on my beautiful man-child who is an extension of my heart, a living continuum of me.

Today, I am overflowing with pride and admiration — and understanding that my son’s reasons for getting the tattoos are his own, and exclusive of mine. I had worried that the tattoos were possibly a sign that my eldest didn’t truly feel the vastness of my love. But I realize now that perhaps it was I who failed to grasp the depth of love he has for me.

I also hope, for my son’s sake, that my future daughter-in-law adores me. 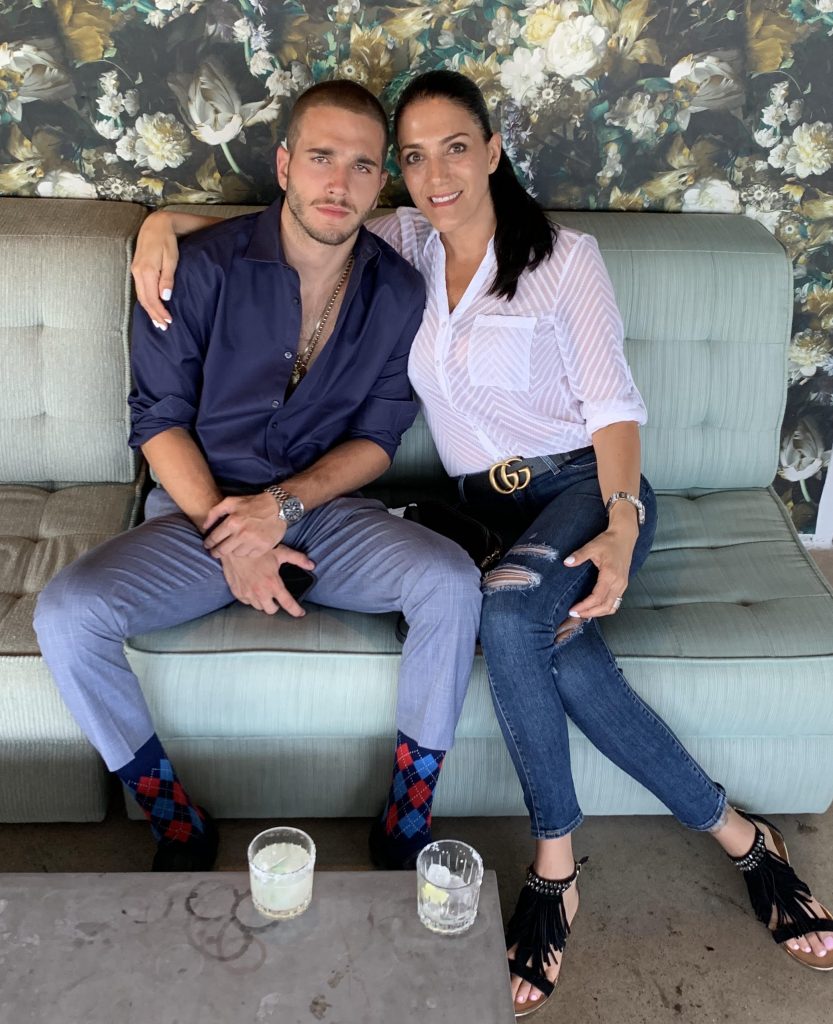 The author and her son. (Courtesy of Gal Mark)