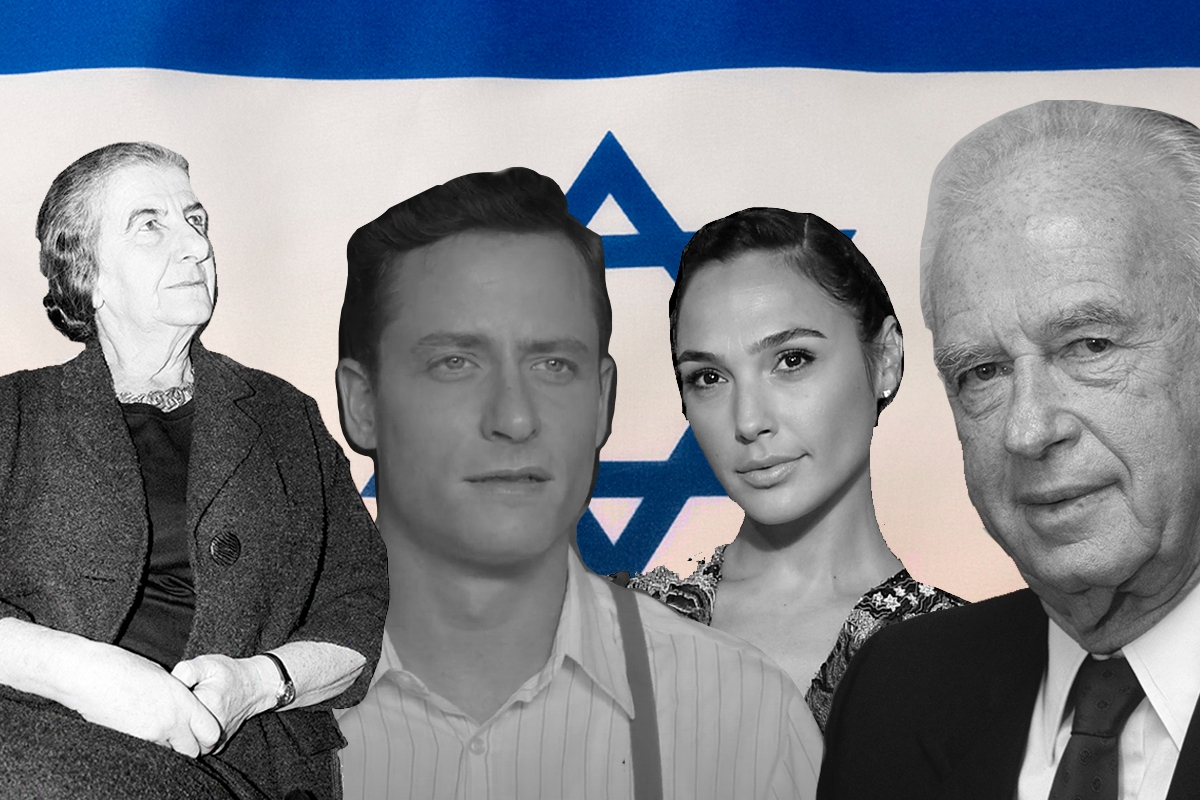 Happy Yom Ha’atzmaut! For those who don’t know, Yom Ha’atzmaut is Israel’s Independence Day, commemorating the anniversary of the creation of Israel on May 18, 1948. (We celebrate its birthday according to the date on the Jewish calendar, the 5th of Iyar, which this year begins on the evening of April 14.) That was the day that David Ben Gurion, who became Israel’s first prime minister, declared the establishment of the state of Israel and the end of the British Mandate.

Over the past 73 years, Israel has gifted the world with many, many influential, talented, and inspirational figures. I can’t think of a better way to honor these groundbreaking artists, writers, activists — and more! — by choosing a baby name that honors one of these exceptional Israelis. In honor of Yom Ha’atzmaut, check out our favorite names inspired by famous Israelis below.

1. Ayelet — Ayelet, which means “deer” or “gazelle” in Hebrew, is also the name of Israeli actress Ayelet Zurer. You may know her from her role as Elisheva on Shtisel (or her role in the new Apple TV series Losing Alice).

3. Golda — Golda honors Israel’s first and only female prime minister, Golda Meir. Meir, who was born in Ukraine, and grew up in Wisconsin, then moved to a kibbutz with her husband, signed the Israeli Independence papers in 1948 and was elected to the first-ever Knesset (Israeli legislature). When she was appointed prime minister in 1969, she was the third female prime minister in the world! To commemorate these trailblazing qualities, name your daughter after this Israeli pioneer.

4. Leah — Leah commemorates the biblical matriarch who was Jacob’s first wife. But it is also in honor of Leah Goldberg, a famous Israeli author and playwright who’s best known for her Hebrew poetry about love and broken hearts, as well as her extremely popular children’s literature.

5. Natalie — While Natalie Portman grew up on New York’s Long Island, the famous actress was actually born in Jerusalem and lived there until she was a toddler. Portman is now a Jewish mom and is set to play a divorced Jewish mom turned amateur detective in a thrilling new show.

6. Netta — Netta means “plant” or “seedling” in Hebrew, and honors the mega-talented Israel’s Eurovision 2018 winner Netta Barzilai. You may know Netta from her hit single “Toy” or her body positivity platform. What a great role model! Another famous Neta (with one T!)? Neta Riskin, who plays the fierce Gitti in Shtisel.

7. Ora — Ora is a Hebrew name that means “light.” It also commemorates Ora Namir, who was elected to the Knesset in 1973. A true trailblazer, Yitzak Rabin invited her to head an inquiry into the status of women in Israel, creating a two-volume work that became a catalyst for  feminist advocacy in Israel.

8. Ronit — Ronit means “joyful song” in Hebrew and also honors the amazing Israeli actress Ronit Elkabetz. A winner of three Ophir awards (the Israeli equivalent of the Oscars), Elkabetz is remembered for roles from The Band’s Visit to a trilogy of films based on the unhappy marriage of her Moroccan parents.

9. Shira —  Shira, which means “song” in Hebrew, is also the name of Emmy-nominated Israeli actress Shira Haas. Haas played Esty in Unorthodox and continues to grace our screens as Ruchami in Shtisel. One of my personal favorite baby names, I love the combination of this name’s meaning and its legacy related to the rising star.

10. Shulamit — Shulamit, or Shula for short, is a Hebrew name with the same root as “shalom,” and also means “peace.” Shulamit Aloni served in the Knesset starting in 1965 and was a pioneering activist for women’s rights and human rights in Israel. She won Israel’s highest honor, the Israel Prize, in 2000.

12. Bar — This Hebrew name means “crops” or “wildflowers” and it is also the name of famous Israeli actress and model Bar Rafaeli. She was the first Israeli model to appear on the cover of Sports Illustrated magazine in 2007, and her roles have spanned from judge on Germany’s Next Topmodel to Israeli TV series Pick Up (2005). She was also in the limelight for being in a relationship with Leonardo Dicaprio in the early 2000s.

13. Elie — Elie is a unisex name that means “my God.” This name also invokes luxury fashion designer Elie Tahari, who is famous for popularizing the tube top as well as tailored suit designs. Tahari immigrated from Israel in the early 1970s, where he got his humble start in the New York garment center.

14. Gal — Meaning “wave” in Hebrew, Gal always makes us think of Gal Gadot, the Israeli actress and mom who slays the screen as Wonder Woman. Honor the persevering spirit of the superhero with this lovely name.

15. Neri — Neri is a unisex name that means “candle” in Hebrew.  Neri Oxman is a famous architect, designer, and a professor at the MIT Media Lab focusing on “computational design, digital fabrication, materials science, and synthetic biology.” She also has artwork in many prominent museums, from MoMa in New York to the Smithsonian. This name is perfect to celebrate the enlightened mind you will be shaping as a parent.

16. Amos — This name, which means “carried” in Hebrew, also remembers Israeli author and peace advocate Amos Oz. Oz’s work mainly covered life in Israel and advocacy for peace with his Palestinian neighbors, which can be seen in his memoir, A Tale of Love and Darkness.

17. David — David is a great name to honor leadership and celebrate the birth of Israel! It not only invokes the second king of Israel, it is also the name of one Israel’s founders, David Ben Gurion. The first prime minister, Ben Gurion led the state’s struggle toward independence and helped develop the many institutions.

18. Ilan — Ilan, which means “tree” in Hebrew, was also the name of the first Israeli astronaut: Ilan Ramon. Part of the 16-day space mission aboard the Space Shuttle Columbia in 2003, Ramon and the other six astronauts on board tragically died before landing. Ramon was the only Israeli astronaut to win a U.S. Congressional Space Medal of Honor, which he received posthumously.

19. Levi — A Hebrew name that means “attached,” Levi also commemorates Levi Eshkol, a Labor Zionist leader and prime minister of Israel from 1963 to 1969. Earlier on, Eshkol was instrumental in getting the German government to let Jews bring their belongings with them when immigrating to Palestine after the War.

20. Michael — An angel in Jewish tradition, Michael is the name of dreamboat Michael Aloni, who stars as Akiva on Shtisel. This name is all the more appropriate on Yom Ha’atzmaut as Aloni is also set to star in a steamy new show about pre-state and post-state Israel: The Beauty Queen of Jerusalem.

21. Theodor — Theodor honors a founder of modern Zionism, Theodor Herzl, who spent his life advancing the dream of a home for the Jewish people. Starting with his 1896 pamphlet Der Judenstaat (The Jewish State), Herzl’s ideas can be attributed to the ultimate creation of the state of Israel.

22. Tomer — Tomer is a Hebrew name that means “palm tree.” The name also reminds us of Israeli heartthrob Tomer Capon, who has graced our screens in Fauda, Amazon’s The Boys, and When Heroes Fly.

23. Yaacov — Yaacov commemorates the biblical patriarch, Jacob, and also Yaacov Agam, an artist and sculptor best known for his innovative kinetic and optical art — most notably his “agamographs,” which appear different when you look at them from different angles. This name therefore invokes pioneering creativity.

24. Yitzhak — Last but not least, the name Yitzhak honors the biblical patriarch, Isaac, as well as the Israeli Prime Minister Yitzhak Rabin. A Nobel Peace Prize winner, Rabin is known for his peace efforts, including the signature of the Declaration of Principles along with PLO chairman Yasser Arafat in Washington D.C. in 1993.