Blexodus: a Jewish Reflection of a Black Revolution – Kveller
Skip to Content Skip to Footer

Blexodus: a Jewish Reflection of a Black Revolution 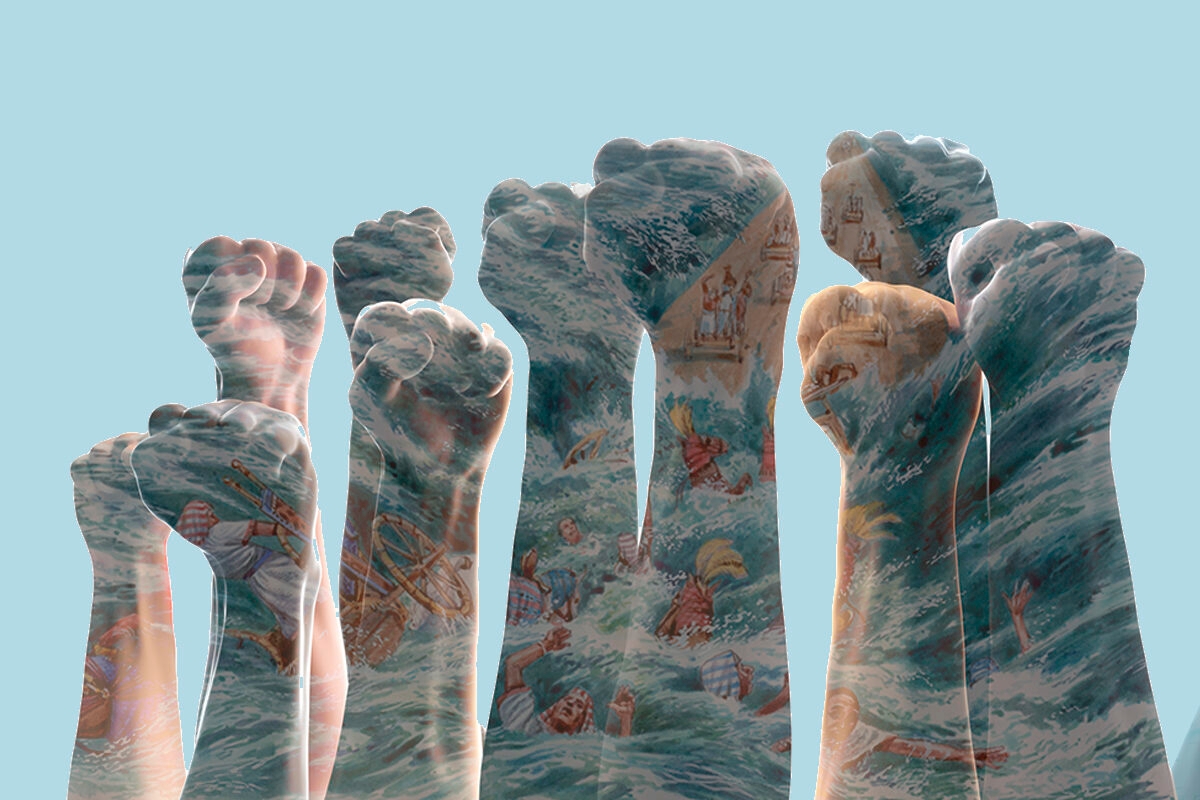 There are many unspoken advantages given to us who are both Black and Jewish. Sometimes we’re blessed with the gift of the Torah as well as the gift of the Bible. Often we have incredible hair and skin.

But, more often than not, the legacy bestowed to us Black Jews is a very unwelcome generational trauma.

As I have told my many therapists over the years, I do not think I’m depressed of my own doings. Rather, my pain is the remnant of suffering long-passed down through my bloodline. Dr. Joy DeGruy developed the theory of PTSS, Post Traumatic Slave Syndrome — a consequence of multigenerational oppression from centuries of chattel slavery. Although Dr. Joy DeGruy’s research relates solely to the African American community, an epigenetic researcher, Rachel Yeshuda, found descendants of Holocaust survivors, too, were more susceptible to PTSD. Like African Americans, the slave experience is baked into Jewish people. Once while oppressed in Egypt, and again in Europe. As a Black Jew, I am the confluence of a religious story known all too well.

The Black side of my family survived American slavery as best they could. Upon their “freedom” — and I use the term loosely — they started one of the first Black settlements in America. It was my great-great-great-great great grandfather, Joshua Lyles who, alongside his brother Samuel, founded Lyles Station, Indiana. The Underground Railroad had a stop-off there. My grandfather was part of the first class of students at the consolidated African American school. My ancestors liberated their enslaved brothers and sisters from both slavery and a lack of education.

The Jewish side of my family lived and died through the horrors of the Holocaust, my father included. And then, after the Holocaust ended, suicide coursed through our veins. Prior to my knowledge and appreciation of generational trauma, I once attempted suicide myself — something I am very proud of having failed at.

Along with my genetic predisposition for depression, I also have inherited memories of those who came before me. While I don’t have flashbacks or out-of-body experiences, I am very much not desensitized to violence. I tremble when scared and easily break into tears when subjected to either bloodshed or fear. Not only did I publicly weep for those who were executed behind the gas chamber doors on display at the United States Holocaust Memorial Museum, I publicly wept during most of Quentin Tarantino’s Oscar-winning Django Unchained in a screening at the Directors Guild. I simply cannot take torture lightly, fictional or not.

America and Egypt tore my two families apart through forced labor. Both bloodlines built their new homelands into powerful empires. Just as Egypt once broke the backs of Jews to make mud bricks, America made Black lives bitter in the cotton fields. Black history intersects Jewish history. There is no need to give Jews a “spoiler alert”warning for what happens next.

It does not take a biblical scholar to note the parallels between Israelites and African Americans. In 2020, Anti-Semitism in the US has reached a 40-year high. Also in 2020, Black Americans have the highest coronavirus mortality rate with 1 in every 1500 succumbing to death (compared to 1 in every 3,600 for white Americans).

Just as Moses was born to lead the Jews out of Egypt, there must be a great leader born to let Black people go in the United States. If you celebrate Moses — the Hebrew son hidden from Israel’s first-born-killing Pharaoh—you should think it no mistake that Blacks are, too, rising up in the name of George Perry Floyd Jr.

Oftentimes in the Black community, we hear cries for the birth of a new figurehead, a new Reverend Martin Luther King, Jr. or Rosa Parks. Other times there’s a call for a mass rebellion, a revolution. An exodus. Unwittingly and unwillingly, Floyd, like Moses, answered both calls at once. The irony isn’t coincidence, it’s predestined.

On May 25, Floyd, 46, was arrested for allegedly using a counterfeit $20 bill to purchase groceries. As a result, a Minneapolis police officer pressed his knee deep into his neck for eight minutes and forty-six seconds. It was recorded for the entire world to watch. Millions bore witness to George taking his final breaths, calling for his mama under the knee that was crushing him. With a deadly contagious plague outside, and social media and 24/7 news coverage inside, the first cracks in the hardened heart of America had begun to emerge.

In those days after his murder, my generational trauma became re-ignited. “Plague be damned,” I said as I disobeyed my parents’ pleas to stay home. Instead, I walked the streets of my majority white, WASPy, Los Angeles neighborhood protesting centuries of bondage — times two.

But as hundreds of thousands called for justice and mercy in Floyd’s honor daily, hourly, and in larger numbers than my small marches, I often wondered if I was doing enough. Yes, I can read books, write letters, tell stories. But was I effecting change? Again, I had to look to my generation before me for answers. Again, the parallels were evident.

Trying to get America to soften its heart toward racism is like drawing water from a rock. But, as Moses proved, it is not impossible. In an outpouring of outrage, I made some changes: I let go of friends who leaned toward hopelessness. I returned to religious texts to help steer conversations. I’m following my Floyd, our Black Moses, to the Promised Land — only this time it’s not the land of milk and honey we desire. Instead, our Zion is a home here in America built on equality and opportunity.

African Americans are only in the beginning of a long, overdue exodus from America’s bondage. We’re just breaking the 400-year old yokes from around our necks. Casual racism is finally getting called out. Like a campfire, bigotry can’t be sparked without kindling — it takes effort to ignite the embers of discrimination, and there’s always someone fanning the flames of bias and segregation.

This Black revolution, spawned from the senseless killing of Floyd, is burning down years of caked-on oppression. Only this time, oppressors are forced to confront their own unwillingness to change all over social media. Though the voices of those who wish to persecute us are loud, we protestors are louder and we have a further reach. The question is, when we reach our Red Sea, will we have help parting the murky waters to freedom?

True, this Blexodus may just be my utopian dream. After all, there is nowhere for American-Africans — or Jews, for that matter — to escape to. Israel is forever at war for its sovereignty just as America is forever at war with those who built, bled, and died for it. All of my people have spent a lifetime passed over.

I ask myself, how can I celebrate the redemption of one bloodline without the relief for the other? To me, the African American story is the same as the Jewish story. The struggle continues, albeit with a different race. We wander together — or no one wanders at all.