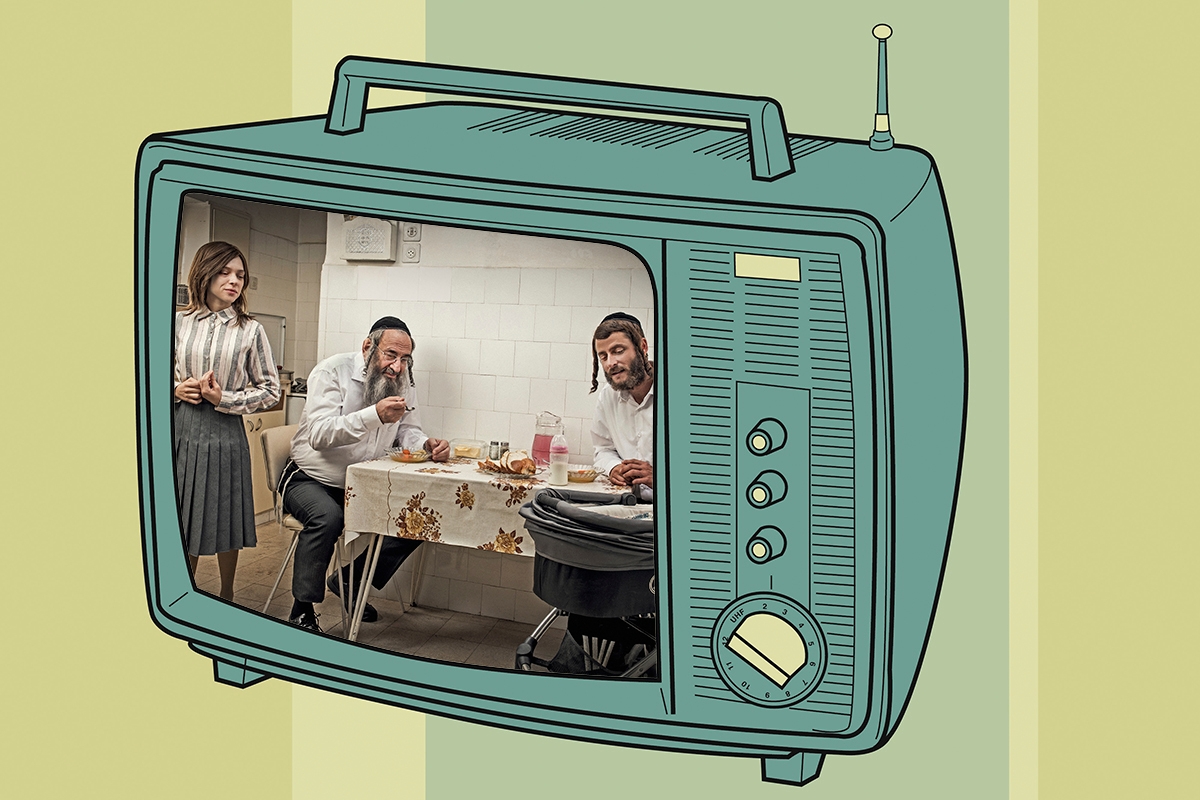 If you’ve binged all of Shtisel season 3 — which premiered on Netflix in March — you may already be jonesing for more of the fictional Haredi family from Jerusalem. Unfortunately, while an American “adaptation” is currently in the works, we don’t yet know if season 4 will happen (here’s what we do know).

If you’re a fan of Israeli TV and movies, however, you may have noticed that our beloved Shtisel cast has starred in a lot of other things you’ve watched. That’s because the Israeli acting world is fairly small, and incredibly talented stars like the ones helming Shtisel really do get cast in a lot of shows. (Also, since salaries aren’t typically comparable to the ones in the States, Israeli actors really have to hustle to make a good living!)

So one great way to get your Shtisel fix is simply to watch everything its cast members have been a part of — and that’s a lot. Sure, nothing quite matches Shtisel, but among these shows and movies you might find a new fave. Let’s get started!

Let’s start with the unofficial star of the show, the dreamy Michael Aloni, who plays tortured artist Akiva Shtisel. Yes, Aloni may be easy on the eyes, but he’s also a great and fairly versatile actor. (He even directed his own film, Shir — which means “song” in Hebrew.) Aloni started his career as a teen as a host and actor on children’s shows, and has moved on to more serious TV. He is also currently the host of the Israeli version of The Voice. Here’s what else you can watch him in:

Based on the celebrated book by Amir Gutfreund, this excellent award-winning TV show tells the story of four soldiers who reunite more than a decade after their military service to solve a mystery in South America.

In the show, Aloni plays Dotan Friedman, known also as “Himmler,” the only Ashkenazi member of the crew who comes from quite a privileged background.

Aloni has a guest role as in this teen show’s 3rd and 4th season as a villain in the this drama at an elite high school. Greenhouse Academy is actually based on the Israeli show Ha’Hamama (The Greenhouse). This Netflix adaptation is helmed by the same Israeli creator (Giora Hamitzer) and features quite a few Israeli stars.

Aloni plays a Shin Bet investigator named Itzik in this Peabody-nominated show about the kidnapping of Mohammed Abu Khdeir, which helped lead to the outbreak of the 2014 Gaza War.

Out in the Dark (Vudu)

In this romantic drama, Aloni plays a lawyer who falls in love with a Palestinian man.

Next, we move on to Shira Haas, because, of course. Haas, who is incredible as Ruchami in Shtisel, also won our hearts in the international hit Unorthodox.  But these two Netflix-based shows are not the only programs where you can find this now-internationally renowned actress — the first Israeli actress ever nominated for an Emmy. Haas, who will soon star as Golda Meir in a Barbra Streisand-produced limited series, has played many challenging, heavy roles in her career. Here’s how you can watch her performances. Warning: none of these are light entertainment!

In this show about a Kabbalistic cult, Haas plays Tamar, the charismatic and manipulative cult leader’s rebellious granddaughter. The 2018 show is loosely based on the true story of Goel Ratzon, a polygamist cult leader in Tel Aviv and fathered 48 children with the women he recruited to join his cult.

Haas is truly intense in this movie about a daughter in a power struggle with her controlling, punishing military dad. Fun fact: Yoav Rothman, who plays Hanina in Shtisel, also stars in this one.

This 2014 film was Haas’ breakout role of sorts. In the movie, she plays a gifted and precocious 12-year-old who takes her make-believe games with her stepfather to dangerous territory.

Haas stars opposite Jessica Chastain in this movie about a Polish zookeeper’s wife who helps hide Jewish families in the Warsaw zoo. Haas plays Urszula, a young Jewish girl, in this film based on a true story. The movie was especially meaningful for Haas, the granddaughter of survivors, and she formed a “special intimacy, a connection without words” with Chastain. “Even if you don’t see her in the frame, she finds a way to be there with you 100%, she will be there on set and give her all,” she said in an interview.

Haas plays the love interest of a young teen boy with an eating disorder in this melodramatic movie that earned her an Ophir award — the most prestigious acting award in Israel.

Haas stars with Harvey Keitel and Lior Ashkenazi in this movie based on a book by Meir Shalev, about a man who goes back to Israel after 40 years away, where he finds his brother running the family bakery and married to their childhood love. It was one of the actress’s first English language roles.

Of course, we had to mention Unorthodox again, just in case you didn’t get the chance to watch this incredible Netflix miniseries based on the eponymous book. In the series, which is a fictional take on Deborah Feldman‘s autobiography, Haas plays Esty Shapiro, who escapes her Satmar community in Brooklyn and moves to Berlin. The role earned her an Emmy and a Golden Globe nomination.

Zohar Strauss is an accomplished actor, acting coach, and… Israeli Survivor contestant. Yes, that’s right, Israeli actors have to make a buck! A lot of us were fairly angry at his Shtisel character, Lippe, after he abandoned his family in season 1 of the show, but in seasons 2 and 3 he’s been on the road to redemption, and honestly, we can’t help but love him. Here’s how you can get more Zohar Strauss in your life:

A movie about a forbidden love affair between two men in a Haredi Jerusalem neighborhood. Strauss stars as a family man who falls for a handsome yeshiva student who drops by his shop.

Another movie about a forbidden love affair between two men, this time a baker in Berlin and a married Israeli man. Strauss plays the brother of the latter, who doesn’t react quite well when he discovers his brother’s lover.

Strauss has a guest role as a religious cop with an inferiority complex in this comedy about a group of Sephardic Haredi yeshiva boys.

Strauss plays Avri, the secular love interest of one of the characters in this show about a group of national religious women and men trying to find their soulmates in Jerusalem.

Ok, so Strauss isn’t the only Shtisel actor to play in this Rooney Mara and Joaquin Phoenix about Mary Magdelene. Strauss plays John the Apostle in the movie, Shira Haas (Ruchami) plays Leah, and Hadas Yaron (Libbi) plays Sarah. There’s also a host of other Israeli actors in this film.

Neta Riskin is absolutely astounding as Giti in Shtisel, and the brilliant, powerhouse actress is equally so in any other role she plays, including some fairly big Israeli and international productions.

That’s right, Riskin played a role in this Sacha Baron Cohen miniseries! You can see her as Tova in this show, which based on the real-life story of Israeli spy Eli Cohen.

Riskin plays Anat, an Israeli tour guide and a possible Mossad agent in the dramatic second season of this thrilling Israeli spy show. False Flag is a serious nail-biter with an amazing cast, so if you’re looking for a great, suspenseful Israeli show, I highly recommend it!.

Riskin has a role in this movie, which stars none other than Richard Gere as a New York Jewish macher who befriends the future Israeli prime minister. Riskin plays Hannah, the assistant to the prime minister’s chief of staff in the film.

A Tale of Love and Darkness (Netflix)

Riskin didn’t only have a role in this Natalie Portman film based on the famous Amos Oz book — she was actually Portman’s Hebrew coach, helping the Hollywood actress perfect her Hebrew accent.

Shulem is the head of the Shtisel family, its stubborn, larger-than-life patriarch. For most Israelis, Doval’e Glickman, who stars as Shulem, is an incredibly familiar face. The comedian and actor starred in Zehu Ze!, one of the country’s most popular comedy sketch shows, which aired between 1978 and 1998, and in 2020 came back for a new season with its older but just as hilarious original cast.

Unfortunately, there are not a lot of places for international audiences to watch Glickman, though you’ll soon be able to watch him and Sasson Gabay (Nuchem) in the movie Oslo. Here are a couple of ways to get your Shulem fix:

In this dark comedy horror-thriller (yes, all these things), Glickman plays Yoram, a man whose granddaughter was kidnapped, raped, and killed. His son, Gidi, attempts to take justice into his own hands. What ensues (I mean, to be fair, what preceded, too) is dark and darkly funny. Even Quentin Tarantino is a fan of this 2013 movie, which is truly not for the faint of heart.

This delightful comedy stars Glickman as one of a core group of friends of a professor who dies right before he is expected to get a Nobel Prize. Along with the rest of the crew, he tries to hide his death until the prize in announced. Sasson Gabay, who plays Nuchem in Shtisel, also stars in the show. Which brings us to…

Sasson Gabay is a star. I mean, truly, don’t tell me you’ve watched him as Nuchem and didn’t subsequently want to watch him in everything? Like Glickman, Gabay is an accomplished actor and a really brilliant comedian. The actor, who is of Jewish Iraqi descent, has played a lot of roles of Arab men through his career, both in Israel and abroad (because, typecasting). Here’s where you can watch him:

Gabay stars as the leader of the Egyptian Philharmonic which accidentally lands itself in the small town of Beit HaTikvah instead of the big city of Petach Tikvah, where they are supposed to play a concert. Gabay later reprised this brilliant role in the award-winning Broadway musical based on the movie.

In this truly excellent but brutal movie about the process of getting divorced through the Israeli rabbinate, Gabay plays a rabbi on a Beit Din for a woman trying to separate from her husband.