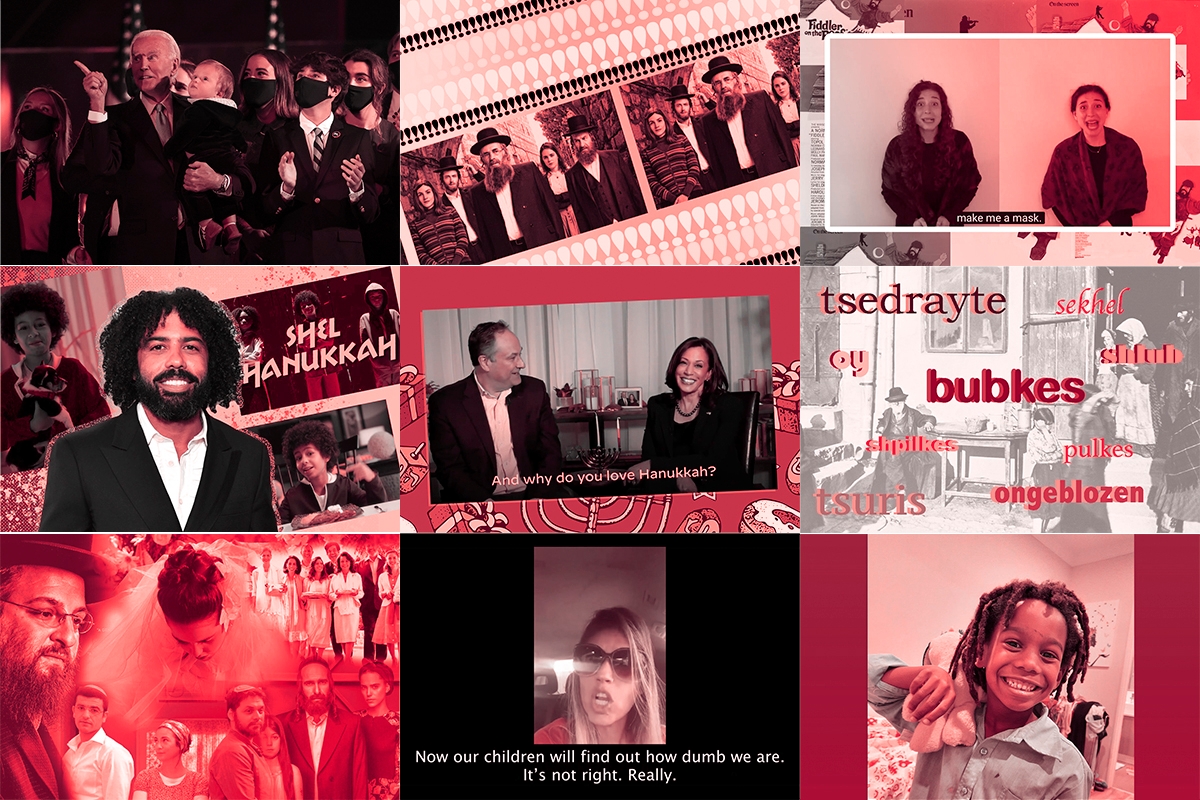 What can we say about 2020 — aside from the fact that we’re just so relieved this terrible year is nearly over?

Looking back on this year like none other, it began so simply here at Kveller. We covered Baby Archie, we wrote about the New York City march against antisemitism, we got excited about the planned Friends reunion and unearthed some Jewish facts about the beloved series.

But soon enough, our world and our lives changed completely due to…. Well, you know. As we all got used to our new reality of staying home alllll the time (or whenever possible), Team Kveller has been with you in the trenches of pandemic parenting, homeschooling, and Zoom eventing every step of the way. Together, we laughed over parody videos, we swapped parenting tips on our Kveller Moms Facebook Group, and we shared summer survival strategies during our live series, Camp Kveller.

We’re so proud of all we’ve accomplished, together, over this unprecedented and difficult year. As we prepare to kick 2020 to the curb once and for all — woohoo! — we’re taking a look back at the stories that resonated most deeply with our community of Jewish (and Jew-ish) families. From heartfelt TV recommendations to incredible moments of Jewish pride, here’s a breakdown of the Kveller articles that helped us get through the Covid-19 pandemic.

1. This Israeli Mom’s Hilarious Rant About Homeschooling Is All of Us

Way, way back in March, when we were all just getting used to our new roles as home school teachers, this Israeli mom’s hilarious rant about the demands of remote learning really, really touched a nerve. Ten months later — with many of us still overseeing our kids’ education from home — her high-decibel diatribe still holds up: Everything she says is so funny because it is so, so true.

2. This ‘Fiddler on the Roof’ Coronavirus Parody Is a Delight

Jews and humor go together like peanut butter and jelly — it’s an iconic pairing that just works. Humor is also a classic Jewish coping mechanism, so it’s no wonder that, by the early spring, brilliant Jewish minds on the internet released a host of song parodies that made us laugh until tears dampened mask-covered cheeks. There were many clever ones — like this Bette Midler parody, “Keep Your Distance” — but Kvellers’ favorite by far was this brilliant Fiddler on the Roof parody, “Maskmaker, Maskmaker” by the supremely talented Abby Goldfarb.

3. Love ‘Unorthodox?’ Watch These Shows and Movies Next

While we oh-so patiently waited for any news regarding a possible third season of everyone’s favorite Israeli show, Shtisel, a new Netflix show about Haredi Orthodox Jews stole our hearts: Unorthodox, a miniseries starring Shtisel’s Shira Haas, based on Deborah Feldman’s memoir by the same name. This Yiddish, feminist tale was the meaty, Jewish drama that so many of us craved — and yet, at only four episodes, we were left wanting more. Fortunately, Kveller’s very own Israeli TV expert Lior Zaltzman provided an essential list of movies and shows that helped so many of us scratch that Unorthodox itch and kept us entertained through a lonely, isolated spring.

4. Yiddish words to get through quarantine

“When I find myself in times of trouble, mamaloshen comes to me…” OK, that’s not quite how the classic Beatles tune “Let It Be” begins — but it’s a sentiment that’s very true in the Kveller community! From tsedrayte (mixed up, confused) to sekhel (good judgment) this piece by Joyce Eisenberg and Ellen Scolnic, also known as The Word Mavens, brought many of us much-needed Yiddish joy, and it helped us expand our vocabularies a bit, too.

5. Shtisel’ Season 3: Everything We Know So Far

Finally, in June, as protests roiled the country, we received confirmation of some very good news: Despite the pandemic, Shtisel’s long-anticipated third season went into production at last. Since that time, we’ve kept you informed of every Shtisel development along the way: Fast forward six months and season three just premiered in Israel on December 20, with international distribution expected in early spring 2021. As if we needed another reason to get excited for a new year!

6. This Boy’s Incredible Rendition of ‘Avinu Malkeinu’ Went Viral. We Spoke to His Mom

In September, a heart-stirring video of a 6-year-old boy belting out an impassioned version of the Yom Kippur poem “Avinu Malkeinu” took the internet by storm. Just who was this adorable child with this incredible voice? (Almost immediately, a false rumor began to circulate that the boy was a son of basketball player Amar’e Stoudemire, a recent convert to Judaism.) Philissa Cramer, the editor in chief of our partner site, JTA, tracked Bibi Shapiro down in Perth, Australia, and spoke with his mom, Nina, in this delightful, eye-opening interview.

Yes, our outgoing president, Donald Trump, has a Jewish daughter (Ivanka converted to Judaism before marrying fellow presidential adviser Jared Kushner). Most people know, too, that incoming vice-president Kamala Harris is married to a Jewish man, Douglas Emhoff (his kids call Harris “Momala,” a delightfully Yiddish-y amalgam of “mom” and “Kamala”).  But very few people realized that our President-elect, Joe Biden, might have the most Jewish family of all: All three of his kids married into Jewish families! We dug deep into the newest branches of the Biden family tree and “introduced” you to his Jewish grandkids — and lots of kvelling ensued.

8. Hamilton’ Star Daveed Diggs Has a New Hanukkah Song and It’s a Miracle

Here’s an unexpected moment of Jewish joy! On December 4, the Disney Channel released a truly incredible Hanukkah song from Jewish Hamilton megastar Daveed Diggs — and it became instantly iconic. “Honestly, it is just the perfect Hanukkah song and the perfect Hanukkah video — I’m not here to argue this one, it’s just a fact,” Lior Zaltzman writes. “It has klezmer, it has hip hop, it has a diverse cast of kids dancing up a storm, it’s funny AF (as fudge! Keeping it PG here), and it’s about puppies.” Hanukkah 2020 may be in the rearview mirror now, but many of us are still playing this bop on repeat.

9. Kamala and Doug’s Hanukkah Message Will Fill Your Heart With Joy

On the first night of Hanukkah, a video posted online by incoming Second Gentleman (Second Dude?) Doug Emhoff lit up the internet and fully melted our hearts. In this absolutely charming Hanukkah greeting, Emhoff and his wife, VP-elect Kamala Harris, discuss why the holiday is important to them — as Harris says, Hanukkah is about “bringing light to places where there has been darkness” — and light the menorah together.

As Kveller’s Lior Zaltzman writes: “It’s a small moment, but for a Jewish person in America —  an America where antisemitism and white supremacy are on the rise —  it is extremely powerful. To see this couple, who will soon be in the White House (or, more precisely, the Naval Observatory), carry on this Jewish tradition — not as a gesture of friendship or allyship with Jewish people, but because it is a historical part of their blended Jewish family and home — is deeply meaningful and groundbreaking.”

Thanks for enduring 2020 with us, Kvellers, and a very happy new year from our family to yours. Here’s to a brighter and better 2021!