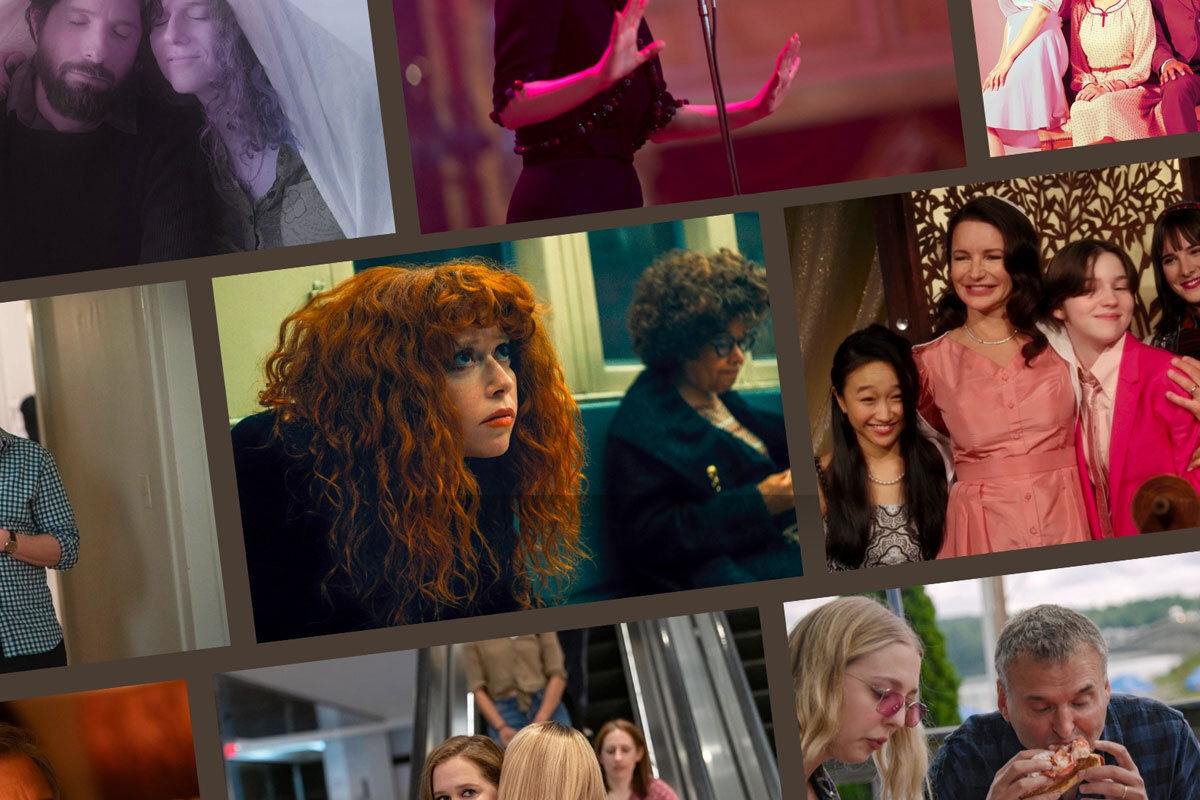 2022 is almost over, and this was a truly incredible year of Jewish TV. There were cantors, there were Jewish delis, there were many, many Jewish coming of age ceremonies, and plenty of adorable Jewish dads.

In a year that felt not so great for Jewish people, there was so much comfort and representation for us on TV. It was truly an embarrassment of riches. As we wrap up 2022, here is my ranking of the best Jewish shows of the year. Looking at this list, I’m truly impressed at the volume of excellent Jewish TV we got this year.

The best Jewish limited TV series: “Fleishman Is In Trouble” (Hulu and FX)

I just can’t say enough good things about this TV adaptation of this very specifically Jewish book, which so perfectly explores a Jewish Upper East milieux — as well as childbirth, gender imbalance and so much more. It really hit me in the feels so hard and is probably, along with “The White Lotus,” one of my favorite shows of 2022.

Read more about the wonderful casual Jewishness of “Fleishman Is in Trouble.”

“Rehearsals” landed on Hulu this year, and this show about the inner workings of the Israeli theater world through the eyes of a couple staging a show about relationships — as their own relationship disintegrates — remains one of the best Israeli TV shows of all time, despite the fact that it is fraught with controversy.

In a year where Jewish joy was so needed, Phil Rosenthal gave us exactly that — and a rumbling tummy. The Jewish dad of two and “Everybody Loves Raymond” co-creator has been traveling the world, sampling wonderful food, and exploring local communities in his docu-series “Somebody Feed Phil,” all the while exuding positivity and treating everyone he meets with such reverence and kindness.

Read more about why Phil Rosenthal is the most comforting Jewish dad on TV.

But as Linda Buchwald wrote this month, perhaps the best thing about Hanukkah on Rye is that “so much of the movie is about the history of Jewish immigrants in the United States. In one of the best scenes, Molly shows Jacob one of the first tenement buildings and explains how they used to be overcrowded and unsanitary, but people stayed because it was still better than what they endured in their home countries. ‘We weren’t supposed to last but we did,’ she says, which is especially powerful for both Jews and non-Jews to hear when there is so much antisemitism and ignorance in this country.”

The much anticipated second season of “Russian Doll” asks if we can fix intergenerational trauma through time travel — with the show’s heroine, Nadia, traveling back to Hungary in the time of the Holocaust to try to recover her family’s lost possessions. It’s perhaps the most out-there exploration of the concept, but also, in many ways, the most enlightening.

Read more about why “Russian Doll” season two may be the most Jewish season of TV Netflix has ever made.

Or actually, is this the best exploration of Jewish intergenerational trauma? “Undone” season 2 (Amazon Prime)

Just like the second season of “Russian Doll,” the heroine of the animated Amazon Prime show “Undone,” Alma, tries to heal her family’s intergenerational trauma by traveling back in time — attempting to undo the greatest trauma of her grandmother’s life, the day that her Jewish parents were taken away to be killed in Poland.

As I wrote back in October, “the season portrays, in a really prescient way, how we — both as children and adults — take on the burden of the wounds of our parents and feel a responsibility to heal those who gave us life, even when it’s clearly not our job.”

Read more about why Amazon’s “Undone” is the best Jewish TV show you’ve never heard of.

Amy Schumer‘s new series “Life & Beth” is a Jewish coming of age tale — for an adult crowd. The show tells the story of Beth (Schumer), a 39-year-old wine salesperson in New York who is shaken out of her going-through-the-motions existence after the unexpected death of her Jewish mother.

It’s funny, touching and the Jewish references in the show are truly so great.

Read more about why “Life & Beth” is a Jewish must-watch.

The best sketch about antisemitism: “Inside Amy Schumer” (Paramount+)

This sketch from the latest season of “Inside Amy Schumer,” in which Schumer’s character is attacked with antisemitic statements during a workplace harassment training, only to be told they’re a non-issue, perfectly encapsulates the nature of antisemitism in 2022.

Read more about how Amy Schumer perfectly met this Jewish moment in America.

The much awaited fourth season of “The Marvelous Mrs. Maisel” was fabulously Jewish, as usual. In the third episode, we got to “attend” a wonderfully chaotic and delightful bar mitzvah, which ended with Abe, Midge’s dad, getting kicked out of shul.

Read why the newest season of “The Marvelous Mrs. Maisel” was worth the wait.

Read about the best Jewish moments of “The Marvelous Mrs. Maisel” season 4.

Read everything we know about the next and last season of “The Marvelous Mrs. Maisel.”

The best Sephardi representation on TV: “The Beauty Queen of Jerusalem” (Netflix)

I have complex feelings about “The Beauty Queen of Jerusalem,” the Israeli series based on the entrancing book by Sharit Yishai Levy, which stars heartthrob Michael Aloni among other truly excellent Israeli stars. While the show is visually magnificent, and the acting is supreme, some of the storytelling feels to me both too melodramatic and not compelling enough.

Still, the show is full of Ladino and beautiful Sephardi food scenes, and I love the funny and harsh relationship between Michael Aloni’s character, Gabriel, and his mother, Mercada, played by Irit Kaplan.

The best they mitzvah scene: “And Just Like That…” (HBO Max)

In the first season of “And Just Like That…,” HBO’s “Sex and the City” reboot, Charlotte and Harry’s nonbinary kid, Rock, has a “they mitzvah” — or rather, they almost have one, but then realize that Judaism isn’t really their jam at the moment. It’s a flawed and complicated episode, but it was, all in all, better Jewish representation than the show ever gave us in its original run.

As I wrote when the episode first aired, “the show presents Judaism as a space that is open and accepting of Rock’s journey, of their gender identity, and even, with Rabbi Jen’s flexibility, of their Jewish choices. When you think of it, that’s rather lovely.”

The Hulu thriller “The Patient” is about a Jewish therapist who gets kidnapped by his patient, who turns out to be a serial killer, and who hopes that said therapist, played by Steve Carrell, will help heal him from his proclivities. It’s full of Jewish specificities — from kosher foods, to a scene with the Birkat HaMazon, or Grace After Meals, to Debbie Friedman songs. It’s also about the Jewish parenting struggle of accepting that your children may reject the traditions of Jewish observance you’ve raised them up in.

Read more about how “The Patient” is a surprisingly nuanced exploration of Jewish parenthood.

Read our interview with the Jewish creators of “The Patient.”

Rachel Bloom and Paul Reiser star in “Reboot” as a TV-writing father and daughter duo trying to heal their relationship. The show, about a television show’s reboot, is one of the most comforting, solid, fun watches of the year, and Reiser’s character, Gordon Gellman, is constatntly touting his Judaism with fun Yiddish references.

Read more about how “Reboot” brings us a lovely Jewish father and daughter duo.

I was not expecting this year’s new Disney Junior Hanukkah episode to make me feel so much, but it truly did. In the show, Filipino Jewish hero Bo tries to decorate his house for Hanukkah for the first time, and while he fails spectacularly at that attempt, he does come to understand what the holiday means to his Jewish mom.

Read more about how “Firebuds” brought us a moving and authentic Hanukkah special.

The Best Jewish show to watch while high: “The Calling” (Peacock)

Did I want this show, which stars Jeff Wilbusch from “Unorthodox” and was created by David E. Kelly, to be good? Yes, yes, I did. But is it? Absolutely not in any intentional way. The fault lies fully in the script and not in the excellent cast, though. The main character’s name is Avraham Avraham, and he uses Jewish wisdom and prayer in his job around the town — but he also says things like, “A famous rabbi once said, ‘The truth will set you free.’ That rabbi was Jesus Christ.”

But inadvertently, I think this show and its myriad of cringe-worthy lines could be entertaining if watched under the influence of a substance. With legalization of weed in more and more states, I think maybe it could be entertaining to watch this while high or drunk. I personally can’t really do either — so I had to ditch the show after Avraham solved his first murder, which involved a man in a hot dog suit, but if you do decide to watch it under the influence, please let me know how it goes.

This truly fascinating four-part BBC One show that first aired in 2021 but came to PBS this year tells the fictional story of Jewish spy Vivien Epstein, who tries to infiltrate a very real post-war British neo-Nazi group.

As Andrew Lapin wrote, “it’s exciting to see a Jewish community take such an active role in not just condemning but actually fighting (sometimes physically) those who would wish to destroy it.”

Read his full analysis of the very excellent and gripping “Ridley Road.”

“13: The Musical,” the Netflix film based on the Broadway production that tells the story of a young boy having his bar mitzvah in small town America after his parents’ divorce, was not a perfect Jewish movie. Yet as I wrote this summer, “watching a kid wearing a kippah being celebrated in a big Netflix musical, singing his heart out and finding joy in Jewish ritual while making all the Jewish kids like him — our kids — feel seen” is pretty friggin’ amazing.

Read more about why I think “13: The Musical” is the perfect Jewish family night movie.

Read our interview with stars Eli Golden and Debra Messing.