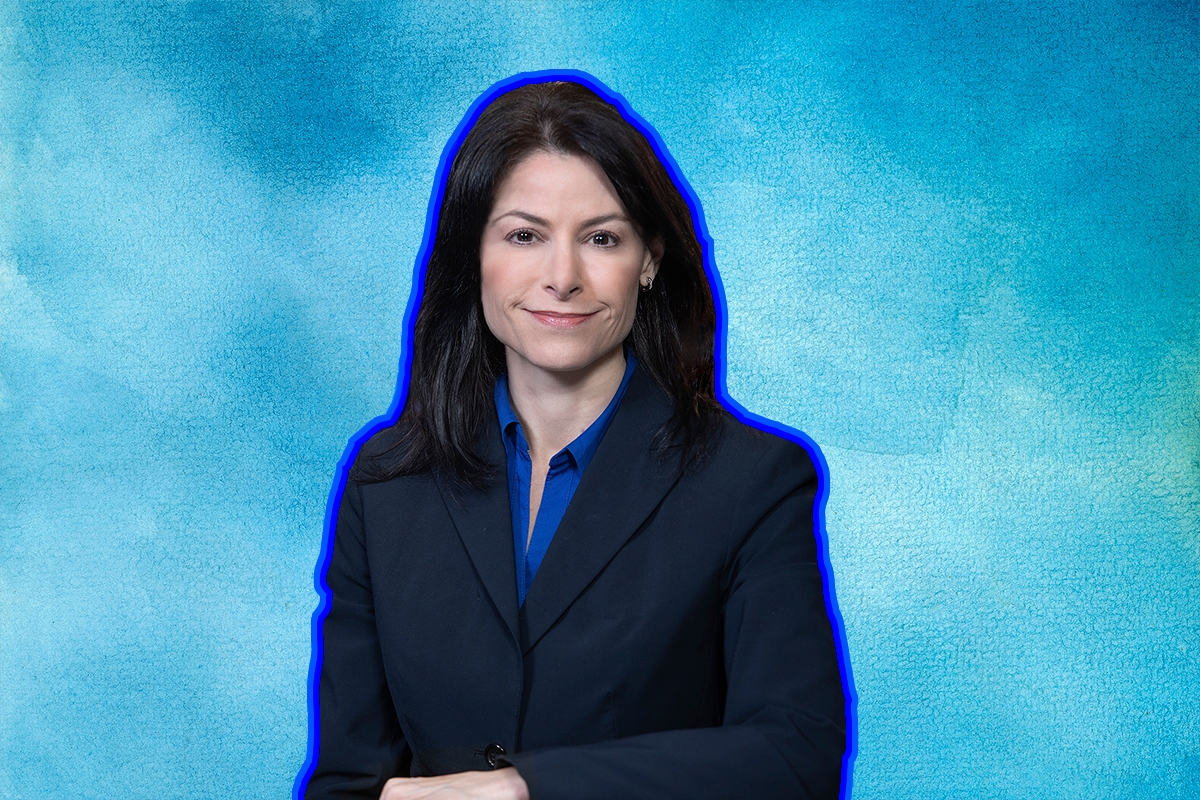 At Kveller, we are inspired by so many Jewish moms, and Attorney General Dana Nessel is no exception.

She has worked on landmark cases like DeBoer v. Snyder, which would eventually be grouped into the Supreme Court case Obergefell v. Hodges, guaranteeing same-sex marriage as a federal and legal right. She also founded Fair Michigan, a non-profit that advocates for the LGBTQ community and prosecutes hate crimes. As attorney general of Michigan, she has prioritized important initiatives like fighting elder abuse and creating a conviction integrity unit.

At the beginning of June, Nessel and Michigan state senator Jeremy Moss (who is also LGBTQ and Jewish!) released an amazing video for pride month. We spoke with Nessel about what her identities mean to her, and how she navigates her role as an attorney general, a gay Jewish woman and a mother.

Growing up queer and Jewish, did you ever see yourself represented?

Growing up, no. I grew up during a time where we didn’t have very many role models that were openly LGBTQ. And I didn’t have anybody in my life or know anybody that was openly gay. You had people that you suspected, but nobody could talk about it.

We did have a lot of people that were Jewish who were role models to many. Certainly from the time I became an attorney, Ruth Bader Ginsburg was somebody who’s pretty inspirational to me. Being from Michigan, Gilda Radner was somebody that I really admired. I’m not usually personally devastated by the deaths of celebrities, but with her it hit really hard when she died as young as she was.

Nowadays, I don’t think you have to look hard to find somebody who is an openly gay person that’s also Jewish — but when I was growing up, you didn’t have that.

Honestly, the first time I remember really wanting to be a lawyer was in middle school. I was heavily influenced by having to read “To Kill a Mockingbird” in the seventh grade. I just loved Atticus Finch, and it was very compelling to me the fact that you could seek justice for people who didn’t have the opportunity to take it on their own by virtue of being a licensed attorney. To me, lawyers are realized superheroes by bringing justice to people. As I got older, there were different things that interested me here and there. But I always returned to decide that you could use your law license to do all kinds of things that were really helpful to people who need help the most.

Are there any Jewish values that you feel helped guide you with this search for justice?

Yeah, very much so. I think everyone has their takeaways from their religious upbringing that are most meaningful to them. The story of Exodus is always very meaningful to me — to have an entire people subjugated for no other reason than their religious values and beliefs, or ethnically how they were classified, and wanting to be liberated from that. Understanding that all people deserve to be treated equally. No people should be enslaved by others. That was something that I thought about all the time, and it was really meaningful to me when we would read those passages. In fact, my father actually reworked our seders a little bit. He would add into the story of Moses quotes from Martin Luther King, Jr. and Gandhi and others. I don’t think I appreciated it then, but I do now, knowing how he was trying to extend the story of Exodus to other events in history.

We were also saturated in the teachings of the Holocaust, and learning about what had happened to our ancestors and my direct relatives. My family on one side was Polish, living along the Polish-Russian border, and on the other side was from Latvia and Lithuania. At Yad Vashem, you can look up on both sides and see all my family members that perished. You really grew up with a sense of discrimination, of big, wrong understanding at its utmost extremes — and what it can lead to. Learning over and over again the mantra, “Never Again.” What that meant to me was that when you have people who are being treated wrongly, and who have been subjugated, or discriminated against, simply because of their race, or their religion, or national origin, or sexual orientation, it’s wrong. And you fight back tenaciously against it, and you do anything and everything in your power to ensure that something like the Holocaust never happens again.

You’re the first Jewish and LGBTQ person to be elected attorney general in Michigan. What does holding these identities and being these “firsts” mean to you as you represent the people of Michigan?

What’s funny is I have to remind people — while I am the first openly gay person to be elected statewide office in Michigan, I’m also the highest ranking state official who is of the Jewish faith ever to be elected to office. I remind people that sometimes when they talk about what it’s like to be a minority, meaning being LGBTQ, I’m actually a member of an even smaller minority, being Jewish. LGBTQ people outnumber Jews in the state, if you look at it from a percentage standpoint.

So I would say a few things. One, I think it helps me to better understand why it’s so important that our laws and our constitution be utilized in a way where we are protecting minority communities. Because whenever you have majority rule, unfortunately, it will inure to the benefit of majorities, and this [majority] will oftentimes seek to discriminate and disempower minority communities.

As I am a member of more than one minority community, it’s led me to be a fervent supporter of separation of church and state. I think a lot of that has to do with being Jewish. And I’m a fervent supporter, obviously, of the rights of LGBTQ people, and in many other minority communities. It’s made me the target of a lot of hate. It’s funny, but because I spent so many years fighting for LGBTQ rights, I think I completely forgot about antisemitism for a while. I mean, I literally was like, “Oh my god, I forgot that that was a thing. What is this, the 1950s?” But it’s come roaring back.

I’m always interested in when I get these emails or phone messages or posts on social media. What is going to be the part of me that people are most offended by? Is it that I’m a woman? Is it that I’m openly gay? Or is it that I’m Jewish?

There were times where I probably wondered, for the sake of my family, if perhaps I should resign my position just for their safety, because the death threats are so fast and furious. But I put myself in the place where I’m in this unique position to represent all people in this state. If I resign because I’m afraid, then those people who seek to discriminate against others really have won. And so I remain in this position, but I am infinitely and persistently aware of the fact that it brings with it its risk.

How do you and your wife approach parenthood?

With a sense of humor, hopefully! We’re really proud of our kids. We have twin boys, and they just graduated from high school over the weekend, and we’ll be seeing them off to college in the fall. It’s hard to become an empty nester so quickly all at once. But they’ll be going to school a hop, skip and a jump away from my Lansing office, so hopefully I’ll be able to see them still from time to time. I don’t think that we approach it much differently from other parents.

I will say, of all the work that I’ve done professionally, the thing that’s most meaningful to me is not just that my work helped bring about the fact that I can marry the person I love, but that my sons have [something] they didn’t start out with in life, and that’s two legal parents. And how instrumental that was in raising them after Obergefell. Being able to jointly adopt children is tied to marriage in Michigan; you can’t do it if you’re not a married couple — even if you’re opposite sex. So the only way that you can have two legal parents is to get married, and I couldn’t get married. It was so important for my kids to be able to have two legal parents, and the change in my life, and the change in their lives, in being able to have another parent. It was such a struggle for me to be in accordance with being a single parent for so many years before I could marry my wife.

What inspired you to make that awesome Pride video with state senator Jeremy Moss?

I adore Jeremy. We’ve been friends for many years. Jeremy and I have a lot in common. It’s not that just that we’re Jewish officeholders, it’s that we have a similar outlook and sense of humor. It’s not just that we’re both gay Jews, but we’re loud and proud of our Judaism, and our gayness, and we still don’t hide that.

But to me, Pride is something to celebrate, right? Pride shouldn’t be a dour time. It shouldn’t be a sober reflection. Pride is fun. So when the governor’s team asked if I wanted to do a video for the state employees, we just wanted to make it fun. We thought it would bring some levity to what is sometimes a difficult subject matter, and to let people know that this is a time of joy and celebration. When we filmed [the video], it was during the same period of time that we had our state senate deliberating about banning trans athletes from competing in high school. On one hand, we’re fighting for things that are very, very important. But at the same time, we want people to look at this month, and this time as celebratory and joyous. Yes, we have a lot to be upset about, and we have a lot that we still have to fight for. But we have a lot to celebrate, too.

Just when you thought Pride month couldn’t possibly get any more gay, Senator @JeremyAllenMoss and I made this!

Is there anything else that you’d like our readers to know?

One of the reasons why I had to get married is because I’m a terrible cook. And even though my wife was not raised Jewish, when she married me, she learned to make every Jewish dish that I didn’t know how to make. Now we have the best Jewish holidays ever, whether it’s a mean raisin kugel, or the best chicken soup, or even gefilte fish. Credit to my Irish wife who was raised in the Catholic family that she can make an awesome gefilte fish like that. That is love.